London-based trio FLO are a shining beacon in the next generation of powerful girl groups. Comprised of Renée Downer, Stella Quaresma and Jorja Douglas, FLO was formed in 2019 after childhood friends Downer and Quaresma met Douglas at an audition. Fast forward to 2022, and their undisputable talents and chemistry saw them hit the charts with ‘Cardboard Box,’ which was, incredibly, their first-ever single. Produced by industry mainstay MNEK, the tune saw the group pair vibrant R&B vocals with captivating pop melodies, cementing their names as leaders of a modern girl band revival.

With equally impressive subsequent releases, including ‘Immature’ and ‘Not My Job’, the group have received a number of accolades, such as Radio 1’s BBC Sound of the Year. They even became the first group to win the BRITs Rising Star award — quite the feat for the fresh-faced trio. The group strikes a perfect balance between modern TikTok-ready earworm hits and the rebellious ‘No Scrubs’-style anthems of old; something that has garnered them praise from superstars including Missy Elliott and SZA. Here, HUNGER catches up with FLO as they discuss their latest single, ‘Losing You,’ and how they reacted to being crowned the BRITs Rising Star. 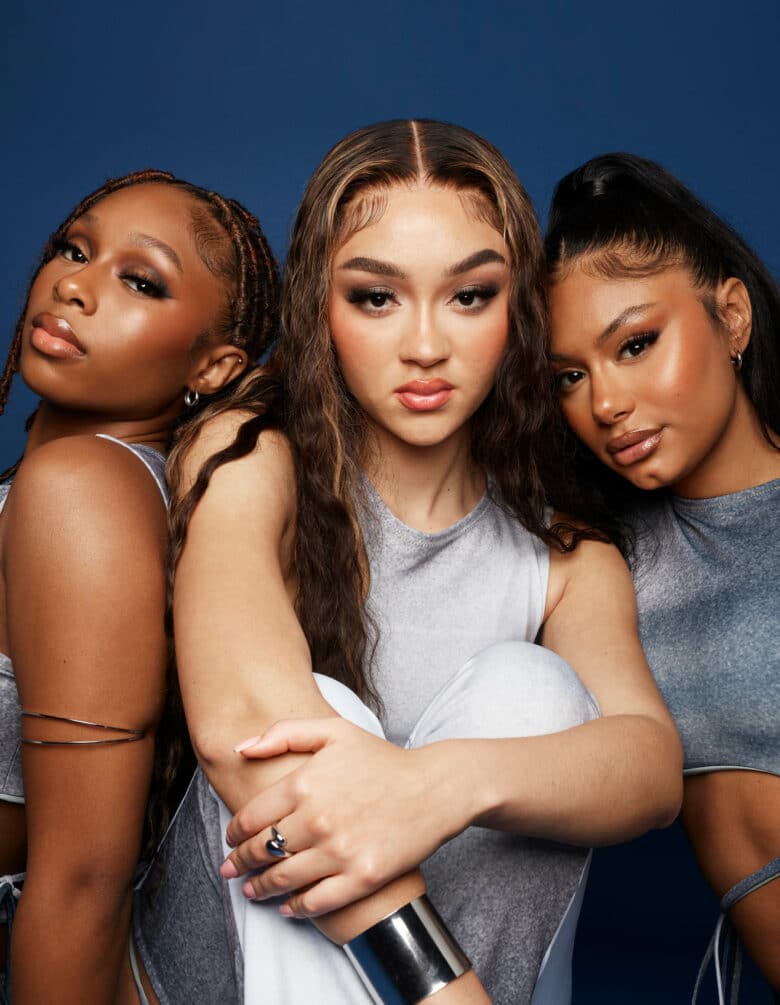 Congratulations on your new single, ‘Losing You,’ what was the inspiration behind the track?

Stella: I felt in a mood to work on something a bit less upbeat; something a bit more emotive but still showing strength as a woman. We all love a slow jam and we didn’t really have an R&B slow jam like it at that point. So I guess it was born at the right time!

Stella: We are very open and honest with what we create. It’s never forced or manufactured. We work closely with MNEK who just knows how to put our feelings into words, we love a good therapy session! We often begin with a great beat or topic, brainstorm melodies and get writing!

Stella: We’ve always had chemistry musically. Whether that be writing songs or just singing together.  But I think this year we really want our song topics to evolve with us. We’ve done ‘the men are trash’ vibes and the independent woman vibes – which we will always come back to, I’m sure! But we want to show a new side to us, more grown, more vulnerable, more experimental – we’re excited!

What do you think are the benefits of being in a group as opposed to creating music solo?

Renée: Being in a group is incredibly beneficial because we are not alone. We’re going through everything with each other, we can relate to each other, and we’re our strongest when we’re together!

It’s fair to say your latest EP has been a huge success, do you feel any pressure to top it on the next one?

Renée: I would say it’s a good kind of pressure. Having a successful first project pushes us to strive for greatness, always work on ourselves and think outside of the box. As long as we’re happy with our development and the music we’re making then we’re sure everyone will love it too!

You recently became the first-ever girl group to be nominated for and win the Rising Star award at the BRITS, how did you feel when you heard the news?

Renée: We weren’t sure if we would win as we were up against great artists but for us to have won is a massive accomplishment. We feel seen, we feel like our work is being taken seriously and we know people believe in the promising future of FLO!

Why do you think there’s a lack of girl groups in the music industry today?

Renée: Surprisingly, we don’t think there is a lack of girl groups! The girl group era has been quiet for a while but it’s all starting to come back. ‘Absence makes the heart grow fonder’ – there’s been time for girl groups to be missed and now we’re being seen.

A lot of your tracks promote a sense of empowerment amongst women, do you feel a responsibility to promote that within your music?

Jorja: We want people, of any gender, age, race, or sexuality to feel empowered by our music – we hope our listeners are reminded that no matter what they’re going through or what people say, there is a bad b inside all of us. It’s incredible how music can be a powerful tool in bringing people together who may feel lost or misunderstood, no matter where you are in the world. We definitely feel a responsibility to use our platform to promote and nurture this within our music.

You’ve received massive co-signs from the likes of Missy Elliott and SZA, how does it feel to be recognised by those legendary names?

Jorja: We can’t believe that these people we’ve looked up to for so long and who inspire our sound have not only heard our music, but also shown love for us this early on in our careers. It’s so special to get respect from other artists, especially from these iconic women. It means the world to us.

What’s been the most surreal moment of your career so far?

Jorja: Meeting Kelly Rowland was insane. I felt like I was having an out of body experience. None of us remembers what we actually said to her, I just remember she smelt amazing and that she had the most beautiful skin I’ve ever seen. We were also noticed on a random street in LA on that same trip, which was mad – as we had only just released our EP the month before and it was our first trip to the US.

Jorja: We’re currently getting ready for our headline show in March, which we can’t wait to meet so many of our fans at! We’re also spending a lot of time in the studio working on our debut album which is coming later this year!