Nia Archives is here to take over the world with her cultural infusion of drum’n’bass. The DJ emerged from lockdown with her tune ‘Sober Feels’, which hit seven million streams, and set the dancefloors of Boiler Room alight with a skilful mashup of British indie and Jamaican sounds. Helping to revive the UK Jungle scene while narrating her own dual heritage, ‘Mash Up the Dance’ and the Brazilian-inspired ‘Baianá’ ring in samba-inspired beats and DIY-style steeping of raw energy. Between her sets at Glastonbury and Notting Hill Carnival, the Bradford-born and Leeds-raised creative is filling dancefloors globally, as she establishes herself as one of the hottest artists of 2023. Here, HUNGER sits down with jungle’s new golden girl to discuss her MOBO win, experimentation and combatting pre-set nerves. 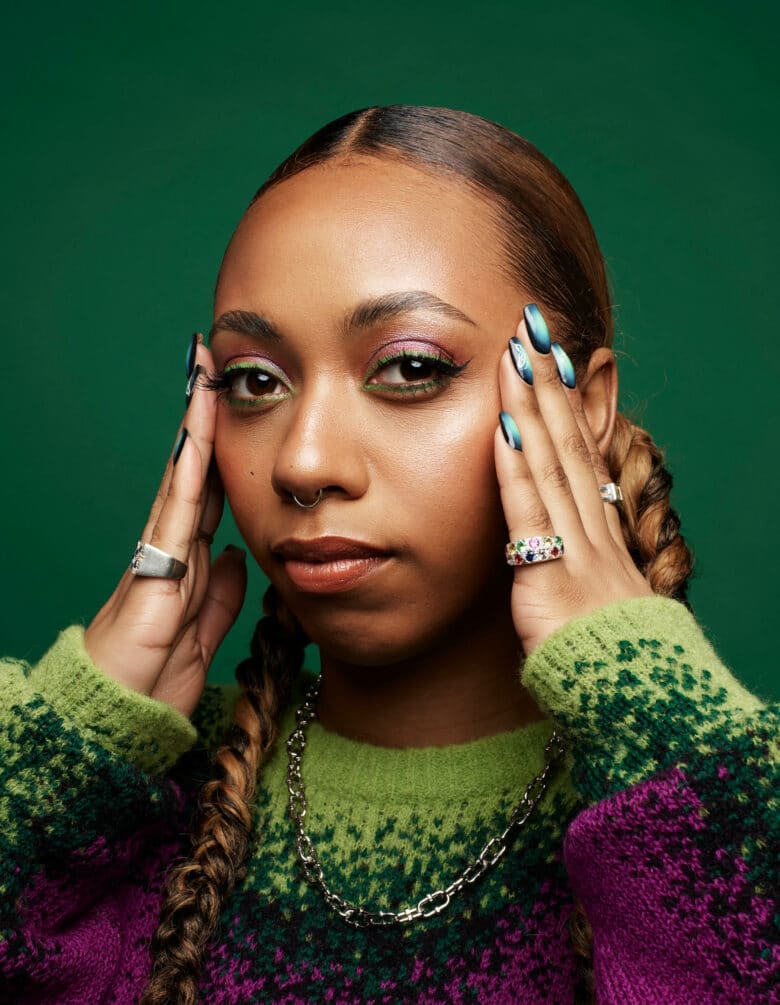 You recently won Best Electronic/Dance Act at the MOBO’s and were nominated for the BRITS Rising Star award; how does it feel getting that recognition for your talents?

It’s really validating when it comes to what I’m doing and being recognised as a producer. I feel very humbled about it all.

I think it’s really healthy. There is lots of exciting new music and amazing new producers on the scene. I’m excited to see where it goes in 2023.

One of the biggest musical moments this year was your remix of Skin On Skin’s ‘Burn Dem Bridges,’ what’s your relationship like with him and can we expect anything from you both in the future?

I really love Skin on Skin. I think he’s an amazing producer and I can’t wait to hear new music from him.

What track are you playing to get a party started?

The Prodigy – ‘Everybody In the place.’

Who are some of the artists you’ve kept in rotation throughout the year?

Are there any other sounds or genres you want to experiment with in the future?

I feel like I’m already experimenting with lots of sounds but I’m very open to being introduced to new ones.

What has been your favourite live performance of this year and why?

Playing the iconic Arcadia stage at Glastonbury. It was basically a giant fire-breathing spider!

Are you ever nervous before a set? How do you combat that if so?

I’m always really nervous and get anxious before every show. But I somehow manage to convert that into performance energy, so it all works out.

What has your experience been like in the music industry so far?

It’s a combination of extreme highs and extreme lows!

What’s the goal for Nia Archives?

I want to keep growing, keep making music that I want to listen to, keep developing my skill set and bring the vision to life.

I’ve got new music on the way and I’m taking my Up Ya Archives parties around the world this year.