Danish R&B duo Phlake are one of the fastest-growing acts to come out of their homeland in recent times. Comprised of producer Jonathan Elkær and singer Mads Bo Iverson, the group propelled themselves into the spotlight back in 2016 thanks to their critically acclaimed debut album, Slush Hours. With Elkær’s flair for production and Mads Bo’s ever-impressive smooth falsetto vocals, the duo quickly became one of Denmark’s most exciting rising talents. Since then, Phlake have cemented themselves as one of their country’s biggest stars, achieving three gold and platinum albums, several Danish Grammy’s and performing sold-out shows in London, Copenhagen, Berlin and Berlin, just to name a few.

Last month Phlake returned to bless their fans with their fourth studio album, Phine – released via Idris Elba’s label, 7Wallace. The project sees the duo profoundly explore the notion of being fine, asking the listener; are we actually “fine” when we say we are? Discussing feelings of loneliness, heartbreak and desperation, Phlake presents a powerful level of introspection and reflection throughout the album’s 14 tracks. By the time we reach album closer ‘Gimme The Keys,’ the group fully embrace the sense that not everything will always be “fine” – and that’s okay. Here, Phlake sits down with HUNGER to discuss the creation of Phine, their European tour and finding comfort in vulnerability. 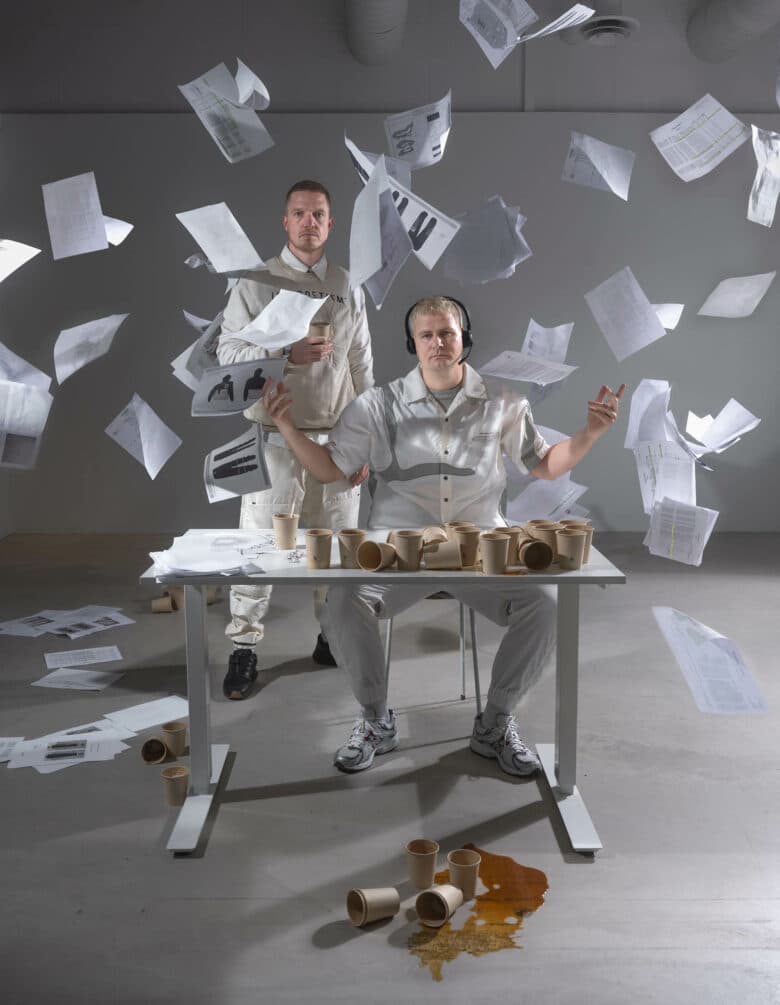 Was there a particular moment in your lives that inspired the theme of your latest album, Phine?

Mads Bo: Hmm, maybe a big mix of moments. To me, Phine is not just a feeling but also a state of mind. You know, when nothing is really good or bad, and you suddenly realise you’ve spent four hours on YouTube.

The album shows a lot of introspection and vulnerability. Do you see music as a form of therapy almost?

Elkær: Definitely. Especially writing lyrics, you get to process a lot of experiences. But it’s also kind of like breathing. I even make music when I’m sleeping and when I’m in the shower. A lot of my ideas for topics and lyrics come in the shower. It’s a perfect undisturbed getaway where no apps, emails or phone calls can get to you. You often have to sleep on it to know how to proceed with a specific song – And when you wake up, it feels like the answer is right in front of you.

Mads Bo: Creating music can definitely be therapeutic. Even though I’ve gotten better, it can still take me a while to finish lyrics. And it can be pretty tough and confusing to tap in and out of a song you started writing maybe a year or two ago, so I have to be careful and remind myself not to get stuck in old shit.

Were you nervous at all after releasing the album, considering the vulnerability shown on the project?

Mads Bo: A little bit, maybe. But NOTHING compared to the first time I ever released a song. In the beginning, I thought everyone would look at me differently – with judgemental and sceptical eyes. But I found out they didn’t, and almost everything was in my own head.

How would you say your sound has evolved since your first album?

Elkær: The lyrics are easier to decipher now compared to the first album. In the beginning, we were busy disguising everything – the content in the lyrics as well as our faces. We didn’t do a proper interview for almost a year after we blew up in Denmark. I think we were afraid of becoming famous. We chose to show our faces and be more transparent in general on this album. Soundwise, I feel like we have developed slowly but constantly ever since the first album. On this particular album, we experimented with live musicians and collaborated more with our live band than earlier – especially on ’10 Feet’ and ‘2min’ that’s the case. And we worked a lot with our guitar player Lasse Ziegler which is why a lot of the songs on this album are more guitar-driven.

How was your European tour?

Mads Bo: The tour was amazing. We had enormous amounts of fun and it was just crazy to see so many people at our shows outside of Denmark. Four out of five shows were almost sold out, even though it’s been around three years since we played in different cities because of Covid. So, I guess that was what you call a pleasant surprise for me. I was genuinely happy.

How would you describe your live shows?

Elkær: It’s very live, and every person in the band is an individual artist with their own superpower. We don’t have a lot of back tracks and people do what the fuck they wanna do. That creates a spontaneous, virtuous and playful energy at our shows.

If you could perform at any venue in the world, where would it be?

Elkær: Performing on the Moon or Mars would be pretty sick. Or maybe just in a spaceship. 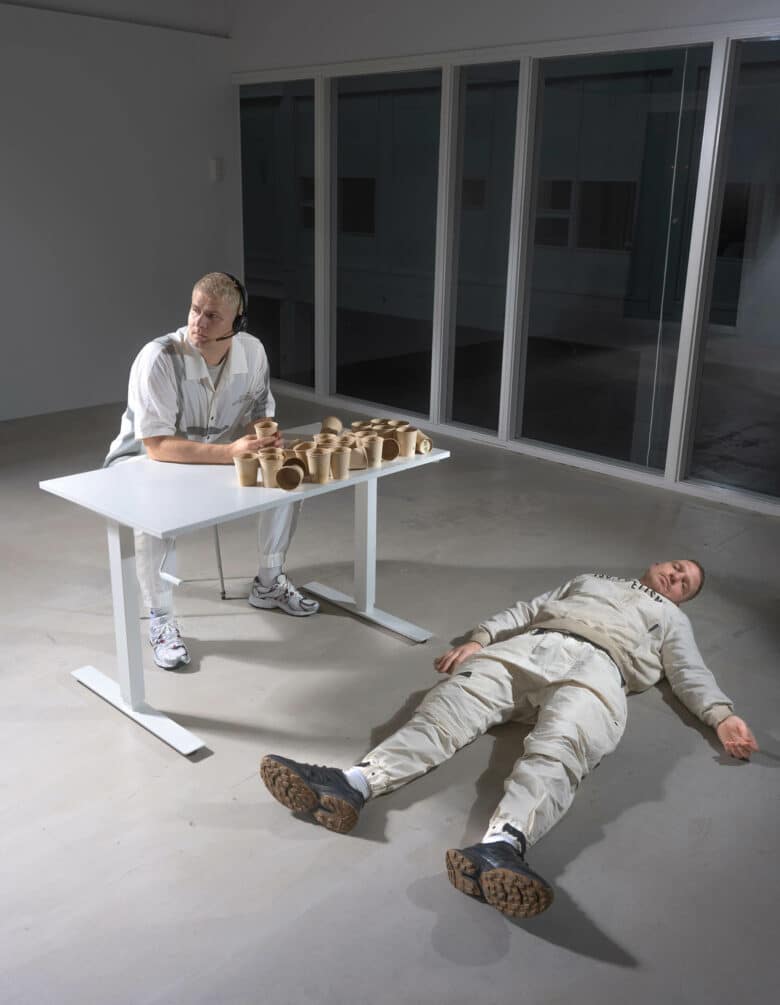 Mads Bo: For many years now, I’ve been dreaming about playing a stadium concert at the home field of my favourite Danish football team, Brøndby IF. It’s close to where I grew up, and I watch games as often as possible. Even though it’s not that far from where I live now, it’s just a different vibe. So it’s a nice way of reminding myself where I’m from.

What album would you say had the most significant impact on you growing up?

If you could collaborate with any artist right now, who would it be?

Elkær: That would have to be Andre 3000, Frank Ocean or SZA.

Do you see yourself stepping into any other creative avenues as your careers progress?

Elkær: I could definitely see us do something even more live – like an old-school type of album where everything’s made with a band in the studio. And I got to be more of a Quincy Jones-type producer instead of a beatmaker. That being said, I could also see us doing something opposite, like a more electronic inspired project. I feel like no matter what genre we do, it would still sound like Phlake.

How did growing up in Denmark influence your sound?

Elkær: To me, growing up in Denmark was a constant reminder of what not to do. I’ve always felt like I was born in the wrong country. Rock and dance music has dominated the music scene in Denmark for decades and I resonated way more with the US music scene – especially soul, hip hop and R&B. Around the time we released our first album, R&B became popular in Denmark. So I guess the timing was right. But you have to reinvent yourself as an artist and a producer now and then. And my music taste definitely matured along the way. These days, I’m open to doing almost any genre.

What is the goal for Phlake?

Elkær: We strive to only compete with ourselves. Even though it can be difficult in a competitive music industry full of numbers, charts and award shows, I think you need to practice and not pay attention to all of that – If you want to stay sane and mentally intact, at least. Our goal is to be the best songwriters, the best live musicians and the best artists we can possibly be. Everything else is out of our hands.