As part of a new wave of Nigerian artists who are taking over the globe, Teezee is taking the vibrant culture of Lagos and sharing it with the world. The musician has been a key component in bringing the Nigerian alté subculture, a concoction of hip-hop, afrobeats and R&B, to the masses. Teezee’s mantra is confidence and individuality, which he sprinkles throughout his distinctive music and flamboyant fashion sense. As a true creative, his potential knows no limits. He’s already collaborated with some of the biggest artists in the world including Kid Cudi, Skepta, and Tems — with that list only set to expand in the future.

This year, continuing his upward trajectory, the musician released his highly lauded EP Arrested by Love. The project holds a truly global sound with Teezee acting as the narrator whilst accompanying you on a journey from Lagos to the wider world. But now, Teezee really is going global with the HOMECOMING x Jameson x Patta tour. The artist has already left his mark with performances in London and Atlanta but will be returning to his beloved Lagos as the tour reached its climax last Sunday. Here, HUNGER chats with the multi-talented star to discuss his love for the UK and his pride in the Nigerian music scene. 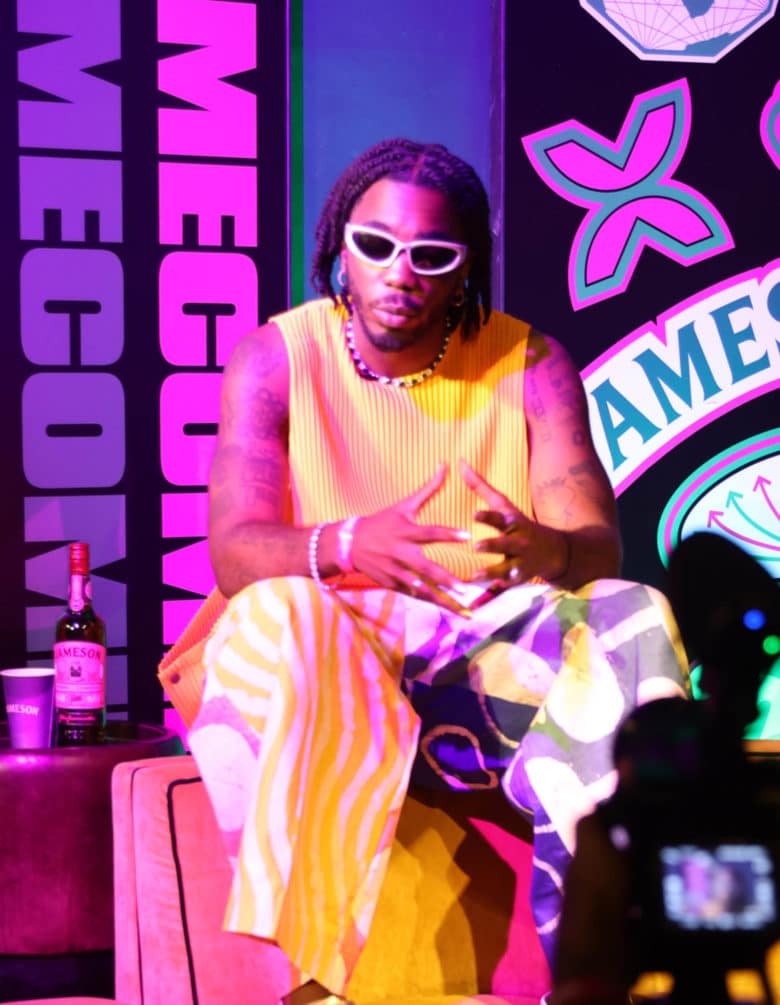 Can you describe your current creative process?

I love to write a story/mood board to build a world around anything I’m working on. Having a strong visual idea is super important to me and from there everything just begins to connect.

Who were the main influences on your sound?

It has to be Kid Cudi, Oasis, Lil Wayne, or Lauryn Hill. I like a variety of sounds and I like experimenting with them all in my music.

Are you proud to see how far the music scene in Nigeria has come over the past few years?

Very proud. I knew it was only a matter of time. I’ve been around so many talented creators in Nigeria since the very beginning of their careers and I always knew how amazing the talent coming out of Nigeria was. We just needed the right platforms and partners behind us to take it to a global scale. That’s why projects like HOMECOMING with Jameson and Patta are so important for the culture.

Do you see yourself as someone who can take it to the next level?

For sure. I’ve been at the forefront of our culture in fashion, music and art for many years. With my own solo projects and with Native Sound System projects, it’s all about taking it to the next level.

How were the shows in London and Atlanta for HOMECOMING?

So dope. London was during carnival so that was special, the energy was crazy.

You’ve spent a lot of time in the UK, how are you feeling about the music coming out of here at the moment?

I really love it right now. Pa Salieu, Pinkpanthress & Minikingz are some of the guys I’m listening to right now.

Where has been your favourite place to perform so far?

Lagos the energy there is just unmatched, there’s nothing like performing in Lagos.

If you could live anywhere in the world, where would it be?

It would have to be Brazil.

What song are you playing to get a party started?

‘PALAZZO’ by Asake, whenever that song plays in the club the crowd goes crazy. That’s probably the song of the summer.

What advice would you give to a young artist coming up today?

Believe in yourself, and never stop pushing.

Are there any creative avenues you’d like to explore other than music?

What do you have planned for the rest of the year?

I’ll be going on tour and I have a load of shows, I’m really excited to just be on the road performing my songs. I plan on dropping some singles too. I’m also working on some really exciting stuff with Jameson, I’ve worked with them for a few years now and we have some special stuff in the works.