Wesley Joseph is so much more than an incredibly gifted musician. Music and filmmaking are the 26-year-old artist’s greatest passions, and he’s combining the two mediums with complete confidence. After moving to London to study filmmaking at university, Joseph ultimately decided to make music his priority. Then came his 2021 debut project, ULTRAMARINE, which cemented him as one of the UK’s most promising talents. The record saw Joseph’s versatility take centre stage, with the artist proving he’s just as comfortable crooning over soulful-future pop as he is spitting a no holds barred 16. Fresh off the back of an appearance on Loyle Carner’s most recent album, this is set to be a landmark year for Joseph, with his highly anticipated upcoming project GLOW set to release on February 17th.

Here, HUNGER catches up with the multi-talented star to discuss the process behind GLOW, how his collaboration with Carner came about, and much more. 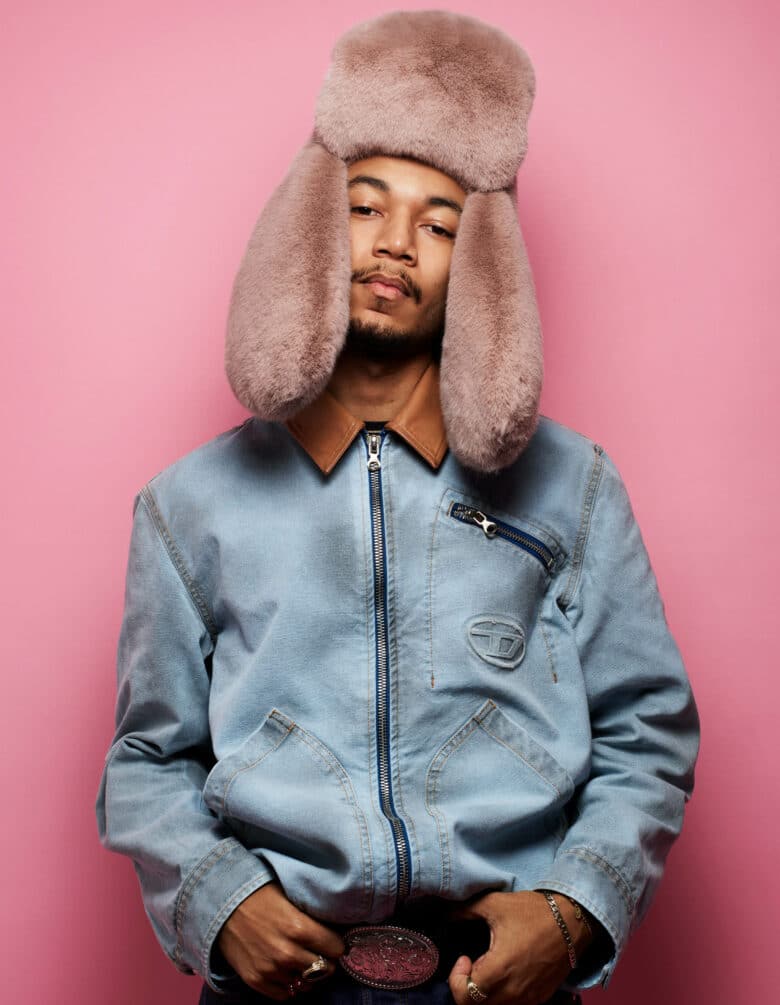 When did you realise that music was something you wanted to do as a career?

I always knew music was what I wanted to do for the rest of my life. At the age of 13, I realised I loved it, but I didn’t realise it was possible to do it as a career until I was around 21. It didn’t really impact how hard I was working; I just wanted to do it because I enjoyed it.

Who were your biggest inspirations music-wise growing up?

I’d say Flying Lotus and Mac Miller. Older music my dad would play, like Marvin Gaye and Curtis Mayfield. There are probably so many I’m missing out right now, but it was just a big mix of different things. I can’t forget MF Doom and Frank Ocean too.

Were there any albums that really shaped who you are as a musician today?

Not shaped me, but I’ve had albums that changed a lot for me. I would say Yeezus by Kanye West, The Colour In Anything by James Blake, The Shining by J Dilla and Nostalgia Ultra by Frank Ocean. Off the top of my head, those are the craziest albums that changed me instantly.

So you grew up in the Midlands. How would you compare the music scene there to London?

In terms of people, there are loads of talented people. But everyone is a lot more introverted. In London, everyone has a manager and knows each other, but in Birmingham, the most talented piano player might just be in his bedroom playing the piano — and you don’t necessarily know unless you know another human being who knows him. I guess that’s how it was for me. It wasn’t like this big network, and there wasn’t necessarily an industry, but there was this real sacred sense of talent. You still get that in London, but in Birmingham, that’s all there is. It’s just community as opposed to hierarchy. Everyone’s just making music, and if you know someone who’s really good, they are genuinely talented. It doesn’t matter how you dress or whatever; it’s just the music and your energy.

Your project GLOW is releasing next year; what’s the process been like creatively with that compared to your previous effort?

So, with the first project, it was more of a concept before we started. I made most of it in my bedroom and it was a huge learning process and was quite scared because I’d never done any projects before. This was the first time I could show the world all of me without compromise, but it allowed me to be more fearless when it came to the second. I allowed my emotions to lead first, and it was less of a concept and more about attacking the moment. It’s a growth record for me.

You studied film at university, and your videos are always incredible. Did you always have the intention to combine those two mediums?

I only realised this recently, but when I tell stories, people always say that it’s slightly more cinematic than it needs to be. I guess I’ve always just seen it through that lens. When I was studying, I literally had to make films so I could keep living in London through university. It wasn’t really about the degree; it was more so just about being here. By being on the course, I got to sharpen the tools I’d built up over the years because I used to make films all the time. I’d make shorts, skits and music videos, all from the ages of 13 to 19. I didn’t have a job, and for most of my teenage years, I was just freelancing and making stuff for other people. Then while I was at uni, I realised I just wanted to make music, to be honest. By the third year, I wasn’t really there that much because I was making a music video with Transgressive, who gave me my first budget. So I was like, ‘fuck university, I actually have money now.’ So I made this video, and off the back of that, I realised I had to finish uni which is how we made ‘Pandamony,’ which I scored, wrote and directed. That was my third-year uni project, which most people don’t know, and it actually allowed me to graduate.

So you recently appeared on Loyle Carner’s hugo on the track ‘Blood On My Nikes’; how did that collaboration come about?

Yeah, that was really cool, and the actual feature was done quite a while ago. Me and him were working but on random bits. He was actually in the studio below me, so we were in the same building, and I’d see him most days. So in the midst of that period, that feature happened, and I wasn’t even sure if it was on the album.

So you didn’t know until the album was released?

Well, he said it was gonna be on there, but I heard an earlier version of the album, and it wasn’t. Then getting closer to the deadline, I heard another version and it was on there. I never cement these things, and things can always change. But it’s a great and powerful song, so it meant a lot to be on it for sure.