Alison Sudol isn’t just happy with being in one of the world’s most recognisable movie franchises. The Fantastic Beasts star wants to leave her creative mark with the release of her new album Still Come The Night, which is due to drop on September 30th this year. Through this project, Sudol is ready to kick the doors down and fully introduce herself unapologetically to the world of music: “I have struggled my whole life with this. On the one hand, I feel like I’m contending with what people want of me, and then, on the other hand, I rebel heavily against that.”

Today, the American singer-songwriter and actor has released the video to her latest single, ‘Meteor Shower’. As is typical of her work, the hypnotic trippiness of the video compliments Sudol’s captivating vocals, which we debuted over on HUNGER’s social channels. This drop follows Sudol’s deeply personal track ‘Peaches’, as well as the UK release of Fantastic Beasts: The Secrets Of Dumbledore, in which she reprises her role as Queenie Goldstein. As you can see, it has clearly been quite a year for the multi-hyphenate.

Below, HUNGER chats to Sudol about her latest single, the upcoming album, and how she regained her fighting mentality.

The new single sounds very hypnotic and psychedelic. Is that a sound you’ve been experimenting with recently?

Yeah, I have. Music for me is about trying to catch the emotion of a moment or a time, but it’s the memory of it as much as what actually happened… The colours, the atmosphere. I find that talking with a beat can sometimes be more powerful than singing. You really hear the story without too much embellishment.

Your new single ‘Meteor Shower’ is yet another personal track from you. Have you always used music to express your emotions?

Yeah, definitely. I started writing when I was really young when I didn’t have any outlet for my feelings. I didn’t know how to communicate to my peers and my parents. There was this whole interior landscape I didn’t know how to express. Music has always been a place where I can attach words to things that would otherwise just float around in my brain like pond scum, which made me feel crazy, and it’s also a way to connect with other people. Music is such a cathartic medium. I don’t think I realised that when I was younger because I was too shy and freaked out by other people to realize they were trying to reach out to me and have a shared experience. I was so lonely, and at the same time, often repelled people getting close to me. As I’ve gotten older I’ve realised that we need music as much as we need other basic things to survive.

Was there anything in particular that inspired you to create music?

I grew up in a very suburban part of LA which was the farthest thing from vibey that you can get…. It wasn’t even like a weird small town where you can find things to rebel against — just California Pizza Kitchen and strip malls. I grew up with a lot of other kids that were taking singing lessons, and there were girls that could sing like Mariah Carey. At the time, that was the ideal.  I was the kid that sang some random Beatles country songs when I was 12 years old on stage, wearing dungarees and a giant straw hat like a dork! I always felt like the ugly duckling you know? So I thought that writing songs was it for me, because I couldn’t do anything as well as those other kids who could sing crazy stuff and were so polished. Writing a song verses actually perfoming it is totally different. It’s really hard to make music, I’ve discovered and it’s taken me a long time to be happy with what I write. 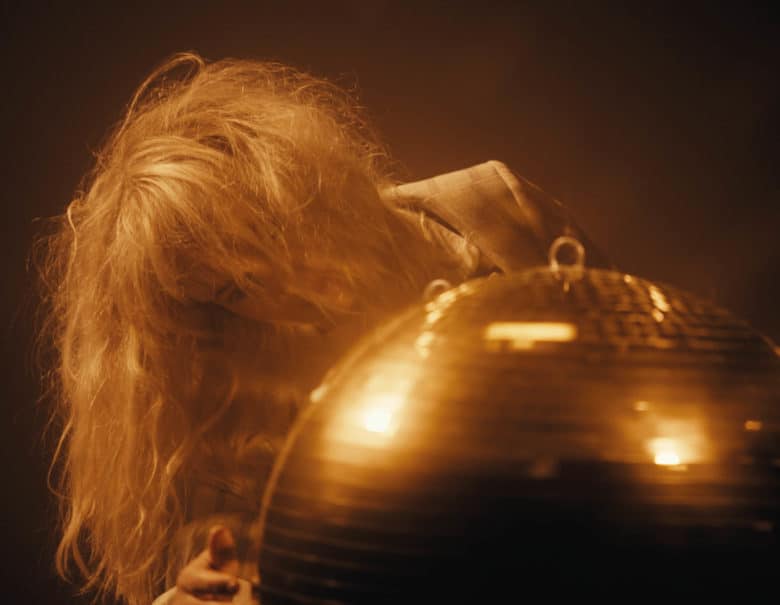 So from what I’ve read about your album it seems like one of the main themes is growth and change. Would you say you’ve grown personally during the creation of it?

Definitely. I’ve always struggled with identity and the conflict between who I think I should and shouldn’t be… what’s cool, what’s acceptable, you know? In the past, I didn’t know where I belonged. But this album has come from a place of genuine survival. I had a miscarriage, and I wasn’t able to get through the day very well. I had to make music because it gave me something to hold onto; something tangible, concrete and creative to keep me from losing my mind. None of the old, stupid shit mattered anymore. I needed to write this and I needed to share it in case it might help someone else going through the same thing.

Who are some artists you’ve been really excited about or would want to collab with?

I’m so bad with artists, so I’m gonna pull up my Spotify. I love Aldous Harding and Julie Byrne. I also listen to a lot of African music and world music artists — they’re amazing. And, of course, 60s folk.

Your album is coming out later this year. How are you feeling about it? Are you nervous?

I’m not nervous anymore, I think I’m past that. I’ve self-released in the past, and it’s difficult — you know, people are concerned about money and sales and stuff. But I would really just like to connect with people on this record. If it’s anything I would worry about, it would be that people don’t hear it. There’s a lot of music that comes out, and it’s easy to get lost but I feel a tiger side of me that hasn’t been activated for a really long time, and I’m willing to fight now. Before, I’d lost my fight for years, and I would just retreat into a hole, but not anymore.

Sudol’s album Still Come The Night will be released on September 30th and can be pre-ordered here.