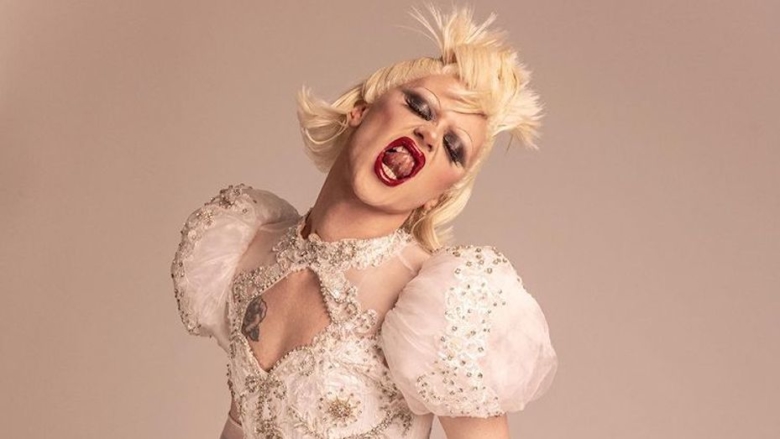 Everybody loves an underdog to riches story and on this season of Ru Paul’s Drag Race UK, that’s exactly what Bimini Bon Boulash served. East London’s bendiest drag queen and the self-proclaimed inventor of veganism, they lipsynced for their life in the first week but would go onto win four challenges and make it to the dizzying heights of the Top 3. While *spoiler* they didn’t end up walking away with the crown, they did snatch the hearts of the nation  – and Katie Price, who was suitably flattered by Bimini’s turn as her during Snatch Game.

To celebrate Bimini’s triumphant turn on the show, we called them up to talk fashion, educating online trolls and how their bimbo image fits into a plan for left-wing domination…

Let’s go right back to the beginning, when did you start doing drag?

I did drag for the first time when I was about 19 and had just moved to London. The idea that you could go out and play around with gender was so new to me but it fell into place and clicked. I remember going out in Soho and first seeing queens like Baga Chipz who were owning the room on the microphone and being in a fab look. It was an eye-opening experience so then I went out in drag and decided to start doing it properly a few years later.

You’ve definitely come a long way since then! One of the things that’s really striking is how much you’ve been accepted into the fashion world post-Drag Race.

On Drag Race I referenced the fashion industry quite heavily and a lot of designers, particularly British ones, that I’ve always looked up to. Since, I’ve been doing loads of shoots with different magazines and wearing clothes that I never thought I would. I sit back and I’m like, “I was dressed in Versace today, and Prada and Givenchy, this is blowing my mind.” I’m just blown away by it all to be honest.

What does that mean to you? I can’t imagine there was the same access to high fashion growing up in Norwich.

I grew up reading magazines and seeing androgynous people and that so resonated with me but I wasn’t able to do that myself. The idea of looking androgynous and being accepted for it was just not accessible. I’d be walking down the road in skinny jeans and people would be like, “Are you a boy or girl?” 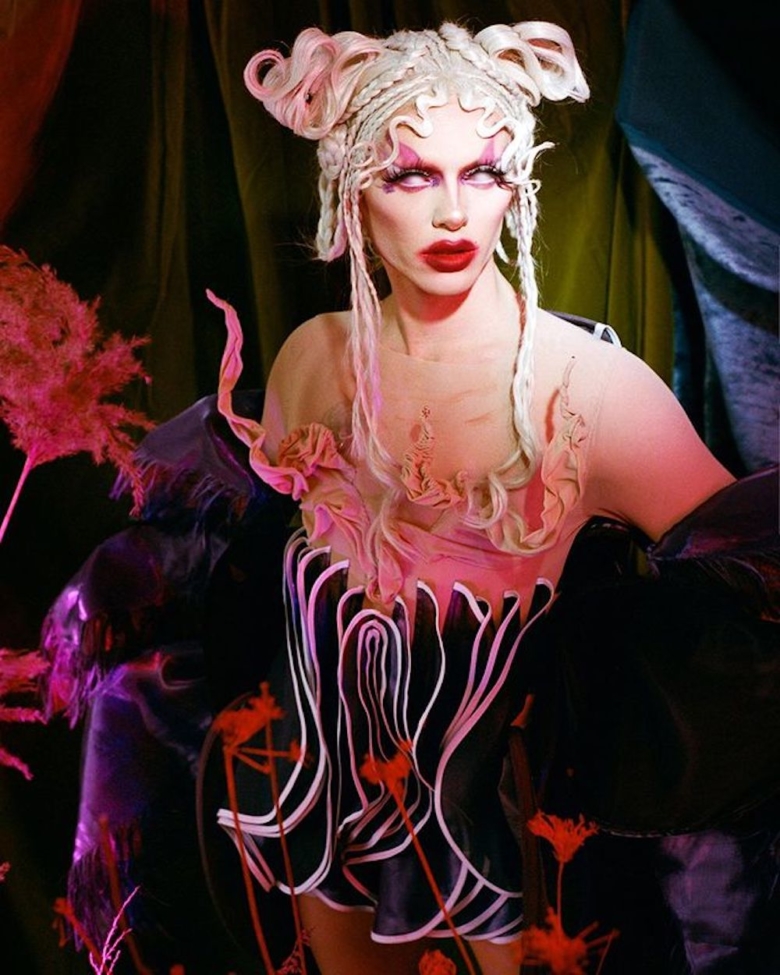 "I want to encourage people to realise that there’s more to life than labels."

Fashion is such a great tool for self-expression but it’s true, people are still so judged for what they wear. That’s definitely something you played with on Drag Race, with your bimbo image.

It’s that age-old thing of “never judge a book by its cover”. I walked in [on the first episode of Drag Race] in vegan pink leather with the big blonde hair. I was being that kind of bimbo because I wanted to show that it’s okay if you want to look or dress like that, there are no issues with that. Pamela Anderson is someone that I heavily referenced, she’s a social justice warrior and always speaking out on issues.

Being from the East London queer scene, you represent a type of drag which is a bit political and a bit more alternative.

I’m from The Glory in East London. It’s not just drag, it’s alternative performance. They’re champions of diversity and giving people the space to perform. It doesn’t matter what you’re wearing, it doesn’t matter what you have between your legs. It’s about the art that people are putting out there. When I realised about my gender [and being non-binary] there was never any judgement.

Your discussion about non-binary identity with Ginny Lemon was one of the most memorable moments from the show. Do you feel a pressure to educate the wider public on non-binary issues?

I actually forgot that straight people exist, my Twitter and my Instagram is just queer people. But you do see the odd comment where people are like, “I don’t get this.” And that’s fine. All I want is to encourage people to be open-minded and to realise that there’s more to life than labels and putting yourself in a box.

I think that some people react so strongly because they feel like non-binary people challenge the beliefs, even the worldview, that they’ve been taught about gender. 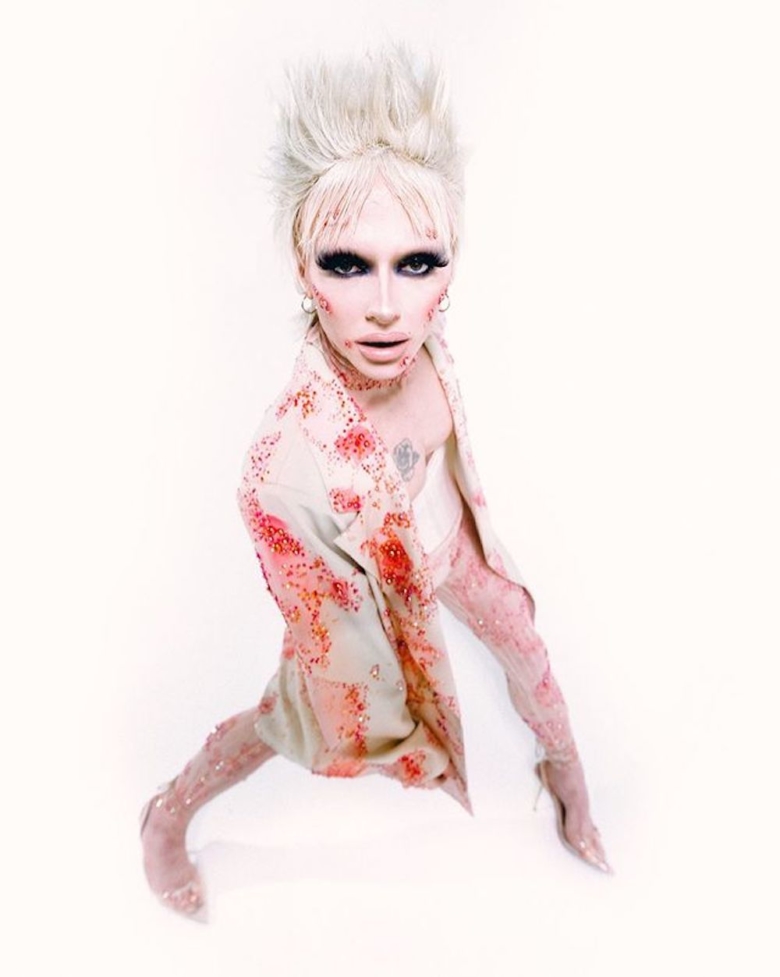 Definitely. Having such rigid ideas about gender actually ends up disadvantaging people in the long run too.

It’s not allowing yourself to be open. Male suicide rates and depression can probably be linked to how we treat men in society, by making making them feel like they’ve got to be strong or put these barriers up. If they’re not feeling okay, they don’t feel like they’ve got anyone to turn to or speak to because they’ve not learned that.

On a different note, something you talked about on the show was how queer nightlife has struggled during the pandemic. Beyond being your livelihood, why is LGBTQIA+ nightlife still so important in the age of queer dating apps and social media?

You can walk into a queer space and 95% of the time, there’s no judgement there for anyone. When you come out and find your people, that’s only really when you start being yourself. It’s something straight people won’t understand about the queer experience. Queer people suppress who they are until they find those people and sometimes they don’t even always find them.

Of course, and it’s in queer clubs and bars that we meet those people. So, as a final question, what’s next for you?

I’ve got new music that I’ve been working on, it’s the kind of thing that I listened to growing up – Blur and Lily Allen and The Sex Pistols – but I’ve queered it up. I’m really excited for everyone to hear it.

Catch up with Season 2 of Ru Paul’s Drag Race UK on BBC iPlayer.