Bukky Bakray is completely aware of how young she is. She was just 16 when she was cast in the critically acclaimed coming-of-age drama, Rocks, which landed her a London Critics’ Circle Film Award, two BIFA nominations, and a BAFTA Rising Star Award, of which she is the youngest-ever recipient. But Bakray, now 19, isn’t one to rest on her laurels. The whole acting thing, after all, was completely unexpected. “Me wanting to be an actor when I was younger was such a white dream,” she says, shaking her head in disbelief. “I’ve never been so surprised in my life. I want to hold onto it.”

Bakray, who hails from Hackney, was scouted after director Sarah Gavron personally visited secondary schools in East London to cast Rocks. The film tells the story of Shola (aka Rocks), who is abandoned by her struggling mother, and left to fend for herself and her younger brother. It was life-changing for Bakray, especially given that it was pretty much shot on her doorstep. With locations including Dalston’s Ridley Road Market, Rocks took an unfiltered look at the original inhabitants of London’s East End amidst the area’s growing gentrification. Bakray and I are essentially neighbours, but she, being born and bred in the borough, can chart how much it has changed. “I knew it had changed when our favourite chicken shop closed. It was like we found out a cousin had passed,” she says, telling me of its owner Khan, who would often give Bakray and her schoolmates free food and petty cash if needed. “I miss what Hackney used to be, and the balance that was there. I went to an all-girls school that was predominantly Muslim and Asian, and looking back we all had a bit of everyone’s culture. The Black and brown experience is so unique to each individual, and that’s what Rocks showed. It’s interesting to see someone else’s life that is so different to yours — it opens up a new perspective.”

Bakray is fascinated by perspectives, and what she can learn from them. In fact, she says that part of her ongoing education comes from inhabiting the characters she plays in film and television. In the BBC courtroom drama, You Don’t Know Me, which will soon be released on Netflix, Bakray plays Bless, a girl whose brother is on trial for a murder he claims he didn’t commit. “I admire Bless, she’s someone I would like to emulate,” says the young star. “She’s someone who has gone through a lot of things in her life, but she always reacts with kindness, no matter how dark the situation is.” But acting is also a way for Bakray to work out her own emotions. On the cusp of her twenties, she is experiencing pivotal and defining life moments, and one thing that’s on the horizon is love. “I want to explore romance in film in a serious way. I’m still figuring out what love is myself, so if you ever see me playing a character who falls in love, all of those emotions will probably be real,” she laughs. “That’s what’s sick about me being mad young and exploring any kind of feeling on film — I’m still understanding and processing it myself, so I’m growing on screen. It’s scary, for sure,” she adds. “But it’s nice. It honours the art because it’s real”. 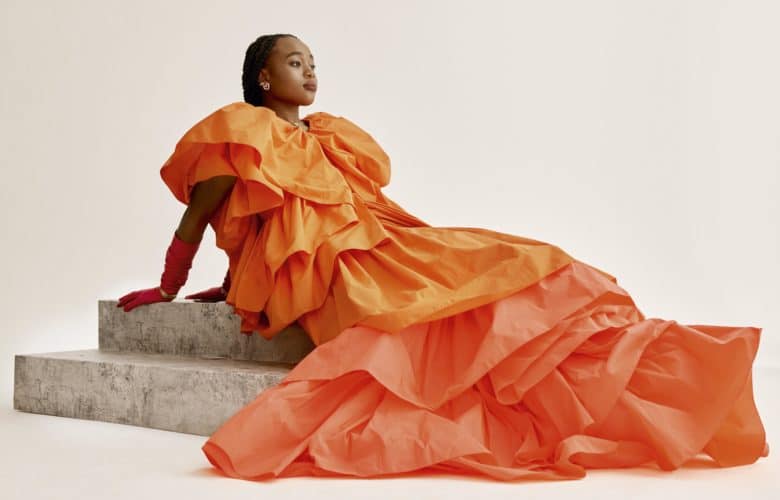 Bukky wears dress and skirt by ROKSANDA X FILA, gloves by PAULA ROWAN, earrings and necklace by SWAROVSKI and watch by OMEGA.

While you may expect such a successful young actor to have an ego, Bakray is stunningly down to earth. Over the course of our conversation, she returns several times to the notion of gratitude, and her eagerness to learn more — not just about acting, but life writ large. “I keep myself grounded by playing my ignorance at all times and surrounding myself with books because I’m very aware of what I don’t know,” she states. “I’m 19, I know absolutely nothing! As much as everyone calls me an old soul, it can never surpass experience.”

“I’m still figuring out what love is myself, so if you ever see me playing a character who falls in love, all of those emotions will probably be real.”

Of course, not long after the success of Rocks, the world was plunged into a series of Covid-19 lockdowns. It must have felt like a step backwards coming so soon after all the acclaim, I wonder. “The lockdown didn’t affect my career in any way,” she replies, telling me that she used the time as an opportunity to consider what opportunities and roles she wants to take on next. “I’m grateful that the world forced me to pause. It made me realise how precious time is, and that if I want a long career then that also takes up time. Do I want to use myself up now or be a slow burn? I want to be really specific about what I want to do and what kind of direction I want to grow in. The lockdown allowed that to happen because I could have easily just taken everything that I got offered. The pause helped me look at stuff holistically. I’m grateful for how it all happened, and how I was able to receive the BAFTA behind the screen with a group of people who I know really cared about it. I didn’t actually hear my name being called, I just heard them screaming.”

This leads us to speak about typecasting in the industry — which, of course, is an issue for many Black female actors. While Bakray acknowledges its prevalence, it’s not something she is concerned about personally. “I don’t worry about being put into a box because of everything I’m consuming and the person I’m trying to become,” she says. “The wonderful Black and brown creatives who came before have created the ability for wayward people like me to be able to do what they choose. Range is a big thing for me. Doing and performing the same kind of person all the time feels like insanity. I’m still growing, and I would love for my art to be a reflection of that.” 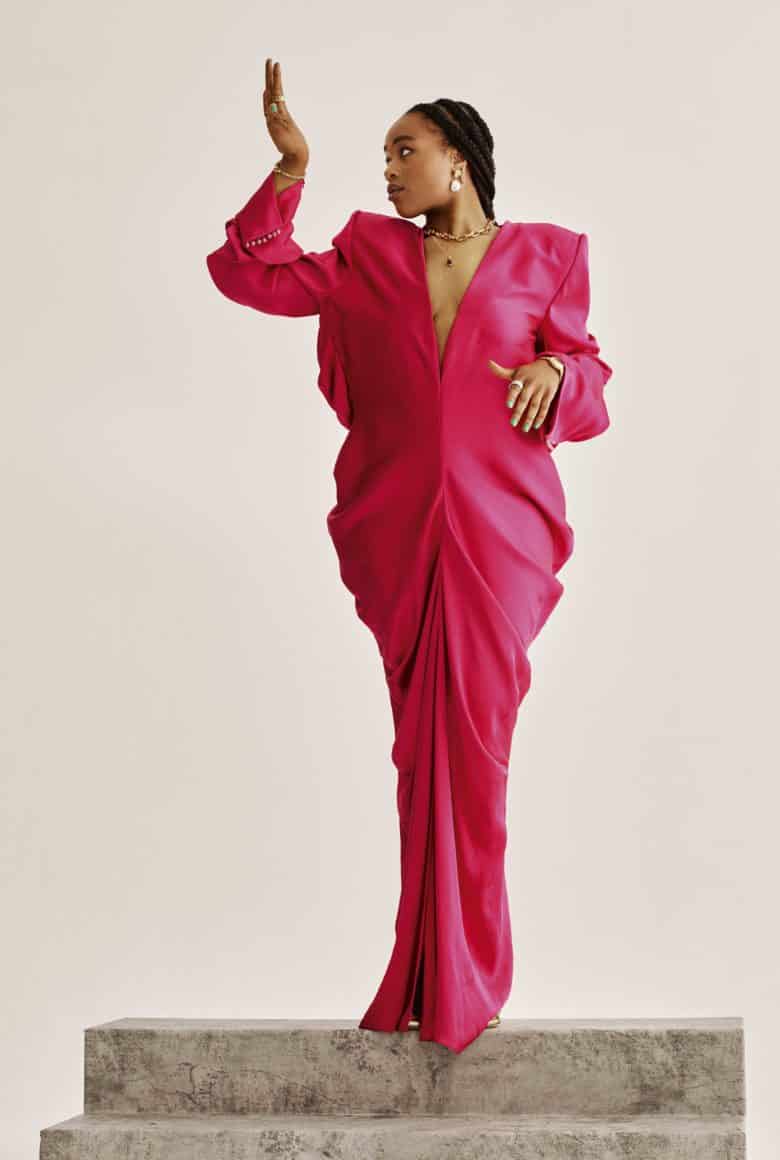 Bukky wears dress by LANVIN, jewellery by ALIGHIERI and watch by OMEGA. 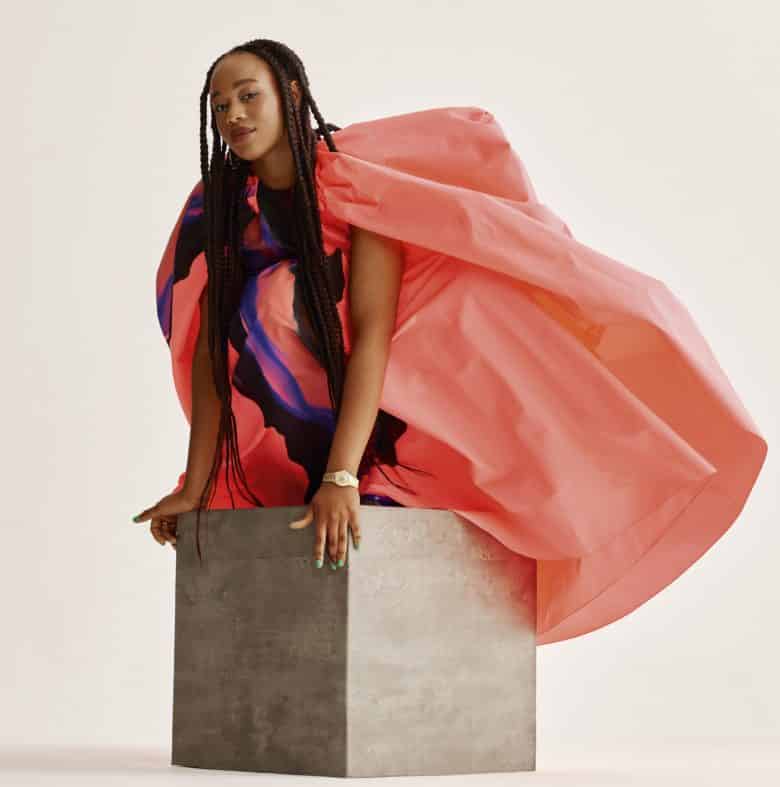 Bukky wears dress and shoes by ROKSANDA X FILA, earrings and ring by ARA VARTANIAN and watch by OMEGA.

Despite having a lot to learn, Bakray has mastered an awful lot in a short space of time. Last year, she made her directorial debut via the short film, Born Fruit — created in collaboration with Gucci. Inspired by director Barry Jenkins, the film featured highly saturated, opulent-looking visuals, which she used to explore themes of identity and legacy. “We wanted to explore grief and life at the same time, and I wanted to use all the senses simultaneously. Even though you can’t smell the film, you can imagine how the fruit would taste by how it was lit.” Speaking about exploring her lineage through her relationship with her grandmother, she continues, “I wanted to use fruit as a theme of abundance and life, and how it never really ends. We all have items from people who have passed, and they live on through that. I wanted people to see themselves and their loved ones in Born Fruit.”

Now, fully back into the swing of things post-lockdown, Bakray has several exciting projects lined up. She wants to direct again, sure, but first, she will be starring in Liason, an upcoming British-French television series developed for Apple TV+, as well as the Netflix film, The Strays, which sees her dip her toe into comedy for the first time. The latter, she says, really pushed her outside her comfort zone. “I never watch the stuff I do, but I’m going to watch The Strays because it was really hard for me playing such an outlandish character.” It’s just one of many challenging roles that Bakray will be taking on, and while each may be different, the thing that unites them is her unwavering sense of vision and confidence. “Everything’s really feeling like one big story of someone who keeps on changing and growing,” she corroborates. Old soul or not, Bakray has her eye on a future that is looking very bright indeed.