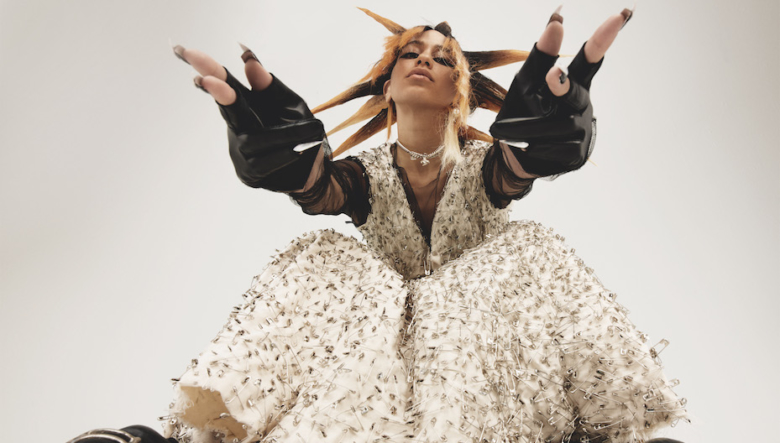 Hailing from the Cayman Islands in the Caribbean (for those in need of a geography lesson, their neighbours are Jamaica and Cuba), Arianna Broderick picked up her first guitar at the age of 15, a moment of teenage experimentation that would change her path for ever. From that point on, she was, quite simply, obsessed with music, spending her summers on Grand Cayman singing to tourists in hotel bars and performing at open-mic nights. Now, after a decade of honing her skill – including at London’s Institute of Contemporary Music Performance – she’s ready to take on the industry with her pop alter ego, Maeve.

Melding brooding vocals with sharp, narrative-driven lyrics that cut like barbed wire, Maeve’s music is alive with contradictions – and that’s no bad thing. Releases such as the folk-tinged single “Empty”, mythology-inspired EP Beasts and soft boy-skewering “Manic Pixie Dream Girl” draw on everything from shitty relationships to the Bible, skilfully mixing the sacred and the profane, lacing universal truths with hyper-specific details. Rejecting the glossy, uncomplicated bangers dominating the charts and earnest indie bubbling in the underground, the rising star is repping a new brand of pop that doesn’t shy away from the messy realities of being a young woman in 2021.

Of course, Maeve has her antecedents, from the chilly atmosphere of Banks’ dark pop to the grandiose edge of Lorde’s songwriting, but her skittish, self-produced beats and larger-than-life video concepts – in “Manic Pixie Dream Girl” she appears as a small cut-out dangling from a car’s rear-view mirror – make her vision uniquely hers. Self-made and self-produced, unafraid to resuscitate listeners from their social media-induced torpor, Maeve is the kind of artist we urgently need right now. After releasing her latest EP, Caravaggio in a Corner Store, a collection of some of her most challenging and emotive songs to date, she speaks to HUNGER about self-expression, inspiring others – and where she finds inspiration. 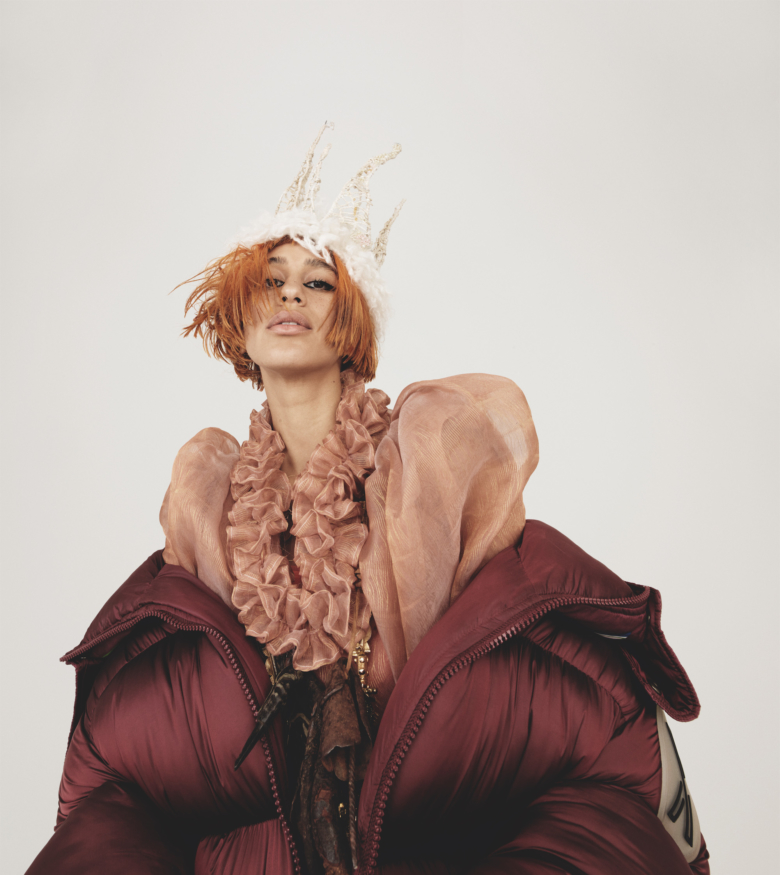 Maeve wears dress by SUE GIVES A FUCK, coat by XUMU, hat by GUCCI, crown by RYSIA PIERZCHALA and necklace by PEBBLE LONDON.

Megan Wallace: Let’s start at the beginning. When did it first click for you that music was your passion?

Maeve: I’ve been singing for as long as I can remember, but I got a guitar for my 15th birthday, and since then I’ve been obsessed with writing songs. I performed my own music anywhere that would let me – bars, restaurants, hotels – and got immersed deeper and deeper.

MW: You’re now based in London but were brought up in the Cayman Islands. Has growing up in the Caribbean had an impact on your sound?

M: The contrast of spending my childhood in Cayman and then moving to London has definitely played a role in my music. [Growing up on Grand Cayman], I became aware of so many diverse sounds and listened to a wide variety of genres. That bled into my sound as it created this clash between the natural and the industrial in what I was producing. Fusing and bending genres is what I love to do, just putting things together that aren’t supposed to be.

MW: That approach of ripping things apart and putting them together is what makes your music unique and hard to pigeonhole. I’m curious though, where do you gather your inspirations from?

M: When I write music I draw from loads of different inspirations, from film and poetry to people I have conversations with. A piece that changed the way I write music was Vangelis’ Blade Runner soundtrack. I’m also obsessed with lyricists – I love Tom Waits and Patti Smith. I listen to a wide range of genres and usually like the greats from each. 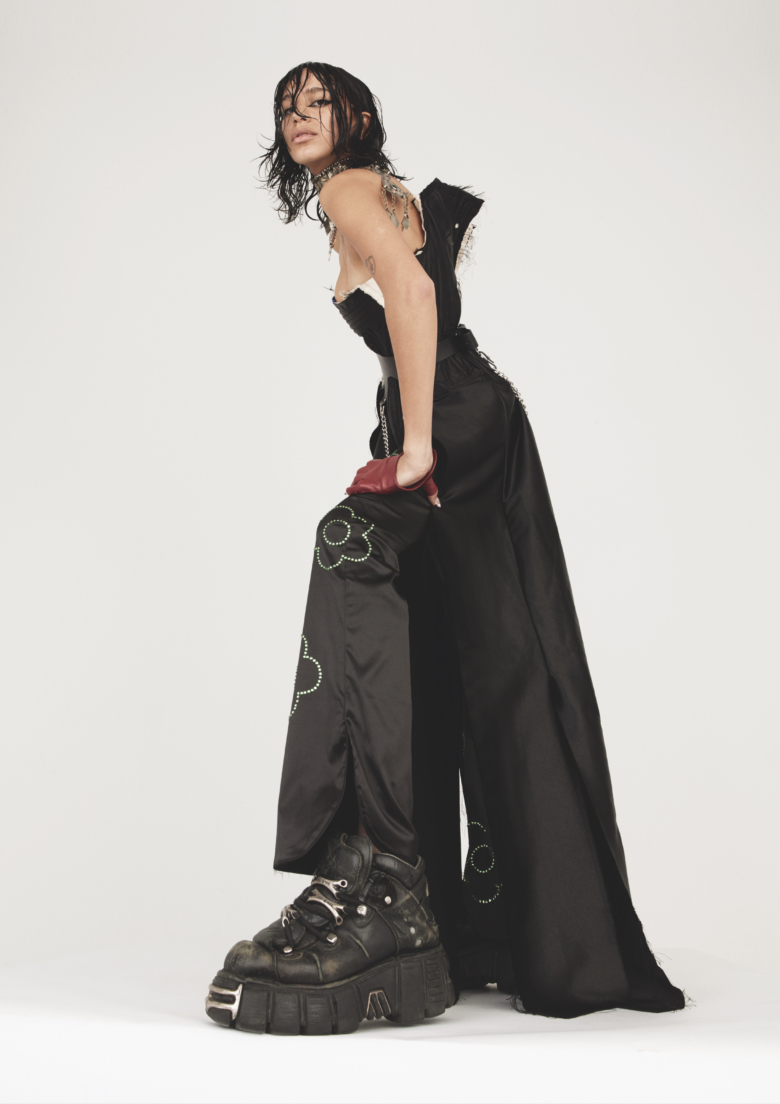 MW: There are so few pop artists making their own beats right now. Why did you want to learn to produce your own music?

M: I’m so particular about what I want to do that there was no way I could afford not to learn about production. I learnt it out of necessity and then fell in love with it. Now I walk around London sampling things off my phone, like coins falling on concrete or train sounds.

MW: As well as your approach to production, I’m really struck by your songwriting. What does it take to be so raw?

M: When it comes to lyrics I just write with brutal honesty from my own experiences. I get inspired by a lot of different sources, from conversations with people to a new word that I’ve seen on a billboard or a sign. I’m just continuously writing lyrics on my phone and laptop and in the countless notebooks that I have thrown about. The internet is also a massive inspiration to me lyrically. I feel like being a part of this whole generation that was raised online has made me have this love-hate relationship with the internet.

MW: A song of yours that really seems to be resonating with your fans is “Manic Pixie Dream Girl”. Were the lyrics also inspired by real life?

M: Yes. I wrote this song because I was feeling like a manic pixie dream girl in my own life. That character’s only purpose is to help lonely men solve their problems while lacking in substance themselves. This song is about rejecting that and becoming the main character of my own life. I was tired of being hung next to rosary beads on men’s car rear-view mirrors and making sure they wouldn’t crash while I was really the one crashing. 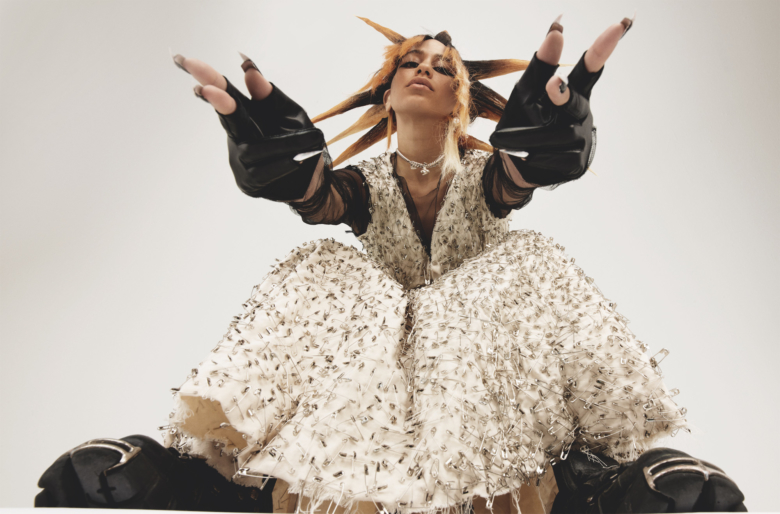 MW: I never would have guessed you went through that, your work projects such an empowered image. Is there anything else people would be surprised to know about you?

M: I like to carry a book to read with me everywhere. Even on nights out, just in case!

MW: A bit of a bookworm, I see. How do you seek the kind of adventure and freedom we read about in books in your own life?

M: What I do is quite adventurous and never gets boring. No week is the same as the next and that’s how I’ve always liked it. Freedom, for me, means being free to be who you want to be, do what you want to do and express yourself the way that you want to.

MW: Self-expression and creativity are obviously really important to you. Outside that, what are the issues that matter to you?

M: There’s a lot that I care about, but climate change is an issue I give a lot of my energy to. Growing up by the ocean made me always feel emotionally connected with nature, and the current state of the world makes me really upset. It gives me hope that more people are starting to get involved with the conversation, though we’ve got a lot of work to do. 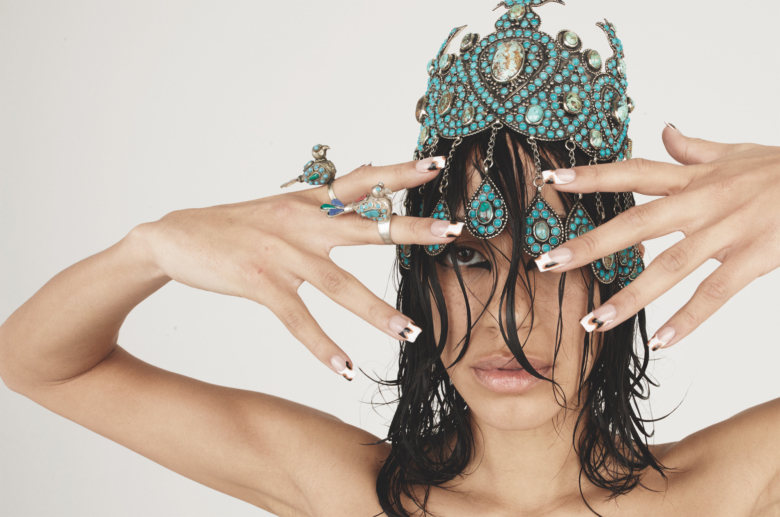 MW: Where do you want to take your career in the future? Would you ever think of combining your creativity with environmentalism?

MW: Melding different worlds inside and out of music, I love it. What’s one thing you want people to know about you?

M: I don’t really care what the world knows about me personally. I just want to create art that people can get lost in but also [be inspired by to] question themselves and the world around them.

MW: It seems like you’re already beginning to create a real community of fans. What do you want your listeners to take away from your music?

M: I only want to do what the artists I look up to did for me. Make them feel like they are seen and hope that they find themselves in my music and become part of my club. We are all trying to make sense of this falling-apart world, so it’s better to be doing that together. 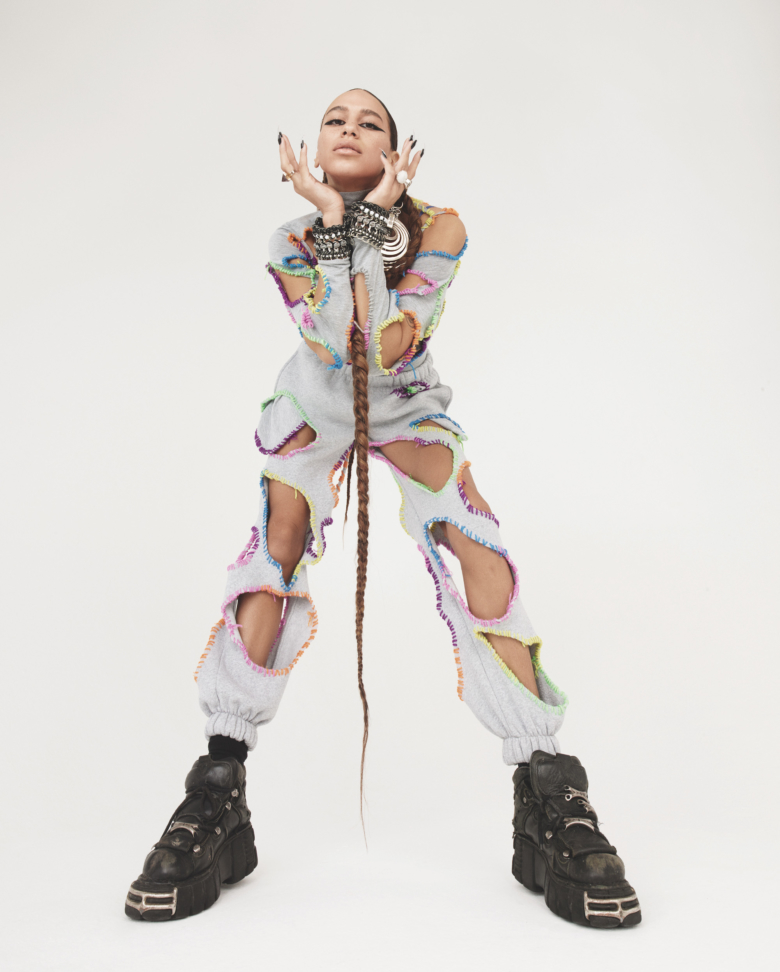 Maeve wears top and trousers by SATION, jewellery by PEBBLE LONDON, and shoes by NEW ROCK.

MW: What are you most looking forward to as pandemic restrictions lift?

M: I can’t wait to start playing some shows again IRL. Nothing beats seeing the immediate connection of a room full of strangers. It’s a very special energy that you can’t find anywhere else.

MW: Let’s talk about your new EP – how has it evolved from your previous releases?

M: My last releases were babies. In this new EP, Caravaggio in a Corner Store, you can see the growth. A lot has happened since those last releases, and most of last year I spent on my own, inside, solely making music and writing. I’ve arrived now.

MW: What’s next for Maeve?

M: I’ve spent a lot of this year writing music and creating art and now I can finally share it with the world – there’s a lot of it coming.

Caravaggio in a Corner Store is out now. 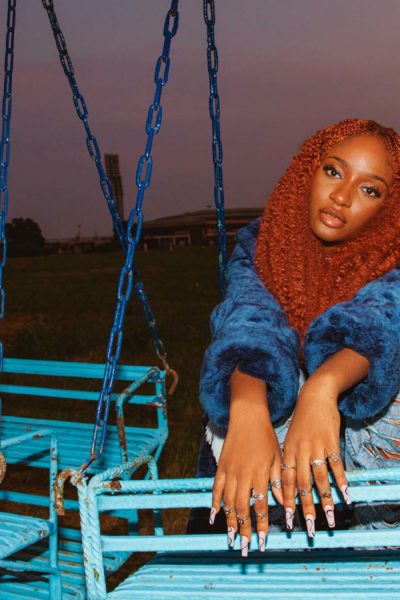 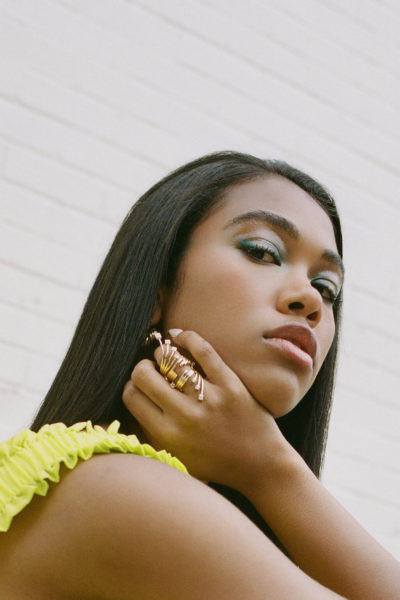 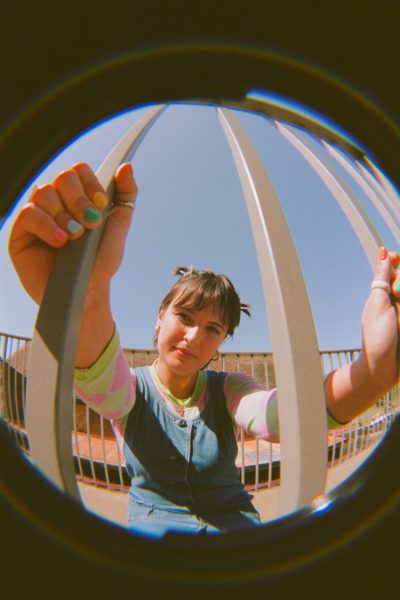 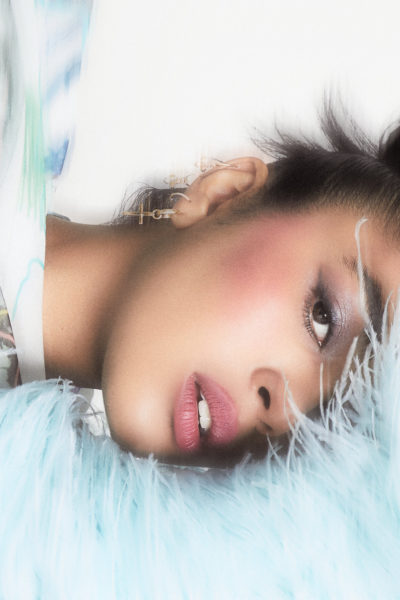 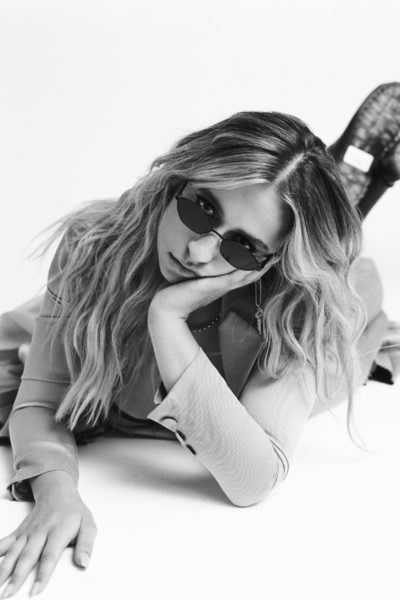