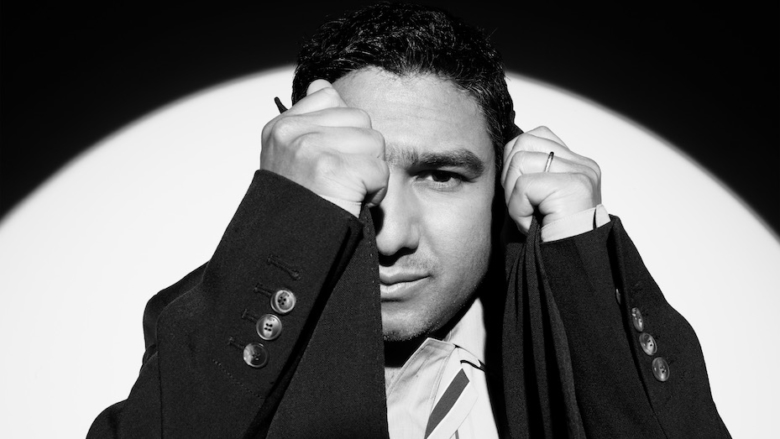 “Should I book Pizza Express?” computer analyst Joseph Harries asks minutes into Intelligence, the GCHQ-based workplace comedy written and created by Nick Mohammed, who also plays the role of Joseph. A US National Security Agency operative – Jerry Bernstein, played by Friends’ David Schwimmer – is due to join the team, and by Joseph’s reckoning, a trip to the chain restaurant’s Cheltenham branch befits the occasion. With the idea soon dismissed, the meeting wraps as erupting pagers announce a database breach at the Bank of England. “How do you get yours to just beep?” cries Joseph, whose device is blasting out “The Ketchup Song”.

The scene, which introduced the first series in February 2020, is a marker of the reference-heavy comedy that commands the show: rich in modern pop culture and loyal to the one-liner, it leans into the landscape of Brexit Britain while examining the inevitable culture clash of Jerry’s arrival.

“I did watch a lot of comedy growing up, a lot of it classic sitcoms,” Mohammed says over Zoom, coincidentally on the morning of April Fool’s Day. “I loved the physical stuff and I remember watching Dad’s Army, Fawlty Towers. When I started to really appreciate comedy I adored French and Saunders, Reeves and Mortimer, The Office and Spaced, which felt slightly more avant-garde when I was a student.” The writer, actor and comedian says, back then, he “supplemented” this TV diet with episodes of Friends and Frasier, while today he veers more towards “obscure Scandinavian drama” (Fleabag and Mae Martin’s Feel Good are recent exceptions). 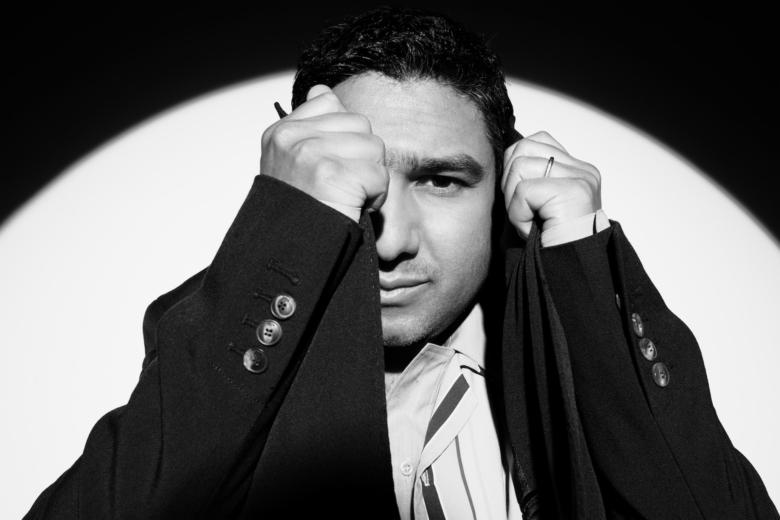 Nick wears jacket by AMI PARIS and shirts by QASIMI.

A former member of the Cambridge Footlights, Mohammed has been a regular on screen for much of the past decade, often embodying characters familiar with the British high street. He’s played a letting agent in Jamie Demetriou’s Stath Lets Flats, the manager of a carpet shop in BBC3’s Uncle, and appeared opposite Russell Tovey as the in-house psychologist in The Job Lot, while also securing parts in Bridget Jones’s Baby and Absolutely Fabulous: The Movie. More recently there’s been Ted Lasso, the football comedy-drama for which Jason Sudeikis made headlines in March, when he wore a tie-dye hoodie to the virtual Golden Globes to accept his gong for his performance on the show. Arriving almost in tandem with Intelligence, and with a similar American-in-British suburbia storyline, in it Mohammed plays Nathan Shelley, the sweet-natured kit man who finishes the season on a high. As with Intelligence, a second series is on the way.

In addition to his TV work, Mohammed is a member of The Magic Circle. Having taken up the discipline as a child, he continued practising while at university, performing in hotels and the like, later introducing his alter ego, Mr Swallow. A camp egomaniac loosely based on an old English teacher, when Swallow isn’t dressed in his staple oatmeal knit jumper and “I heart my violin” badge, he’s usually wrapped in a silk cape performing Houdini stunts or restaging Dracula at the Edinburgh Fringe. It was as Mr Swallow, dressed in his uniform beige, that Mohammed went viral in 2018: the video of a bit he did on 8 Out of 10 Cats Does Countdown, putting lyrics to the Jurassic Park theme, has had 8.9 million views, while Mohammed continues to hear about it on social media. “People tweet at me saying, ‘Jurassic World’s on the telly and I can’t watch it because all I hear is these lyrics,’” he laughs. “It must be really annoying, but I’m secretly quite proud, in part because it’s so daft.” 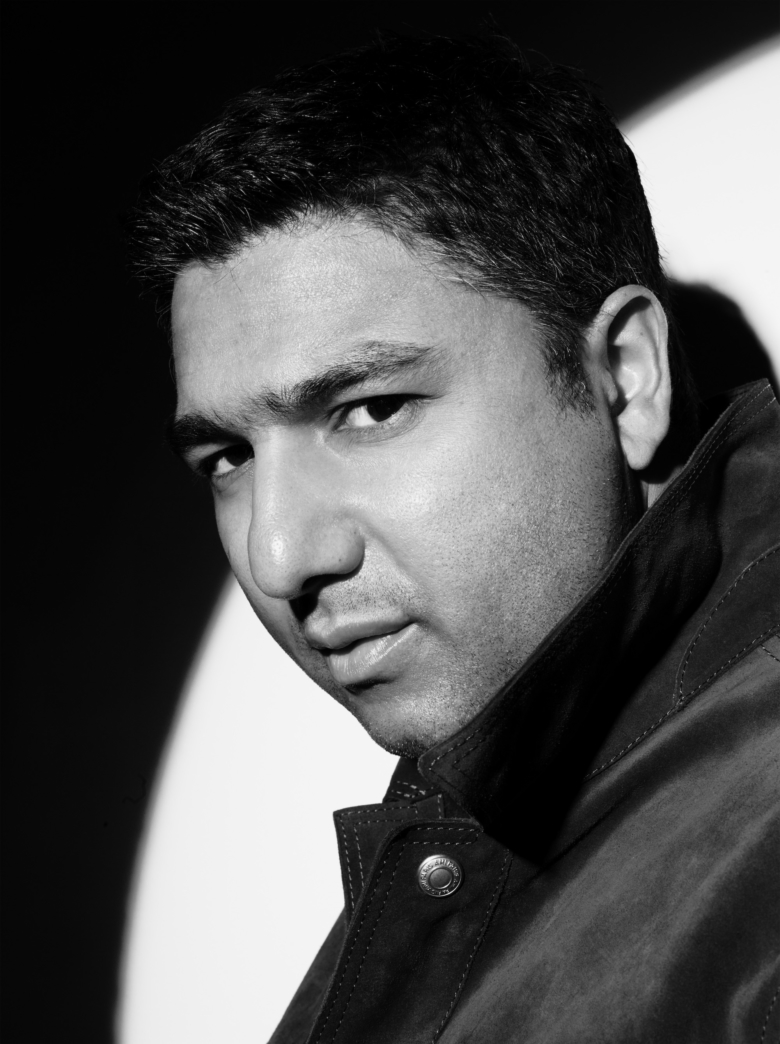 “I feel very comfortable writing all the stuff to do with race because I feel I can own that, while, say, a white writer would have to justify some of the words. I have experienced racism and can offer a unique perspective”

With Intelligence, Mohammed marries the type of water-cooler culture lost to the pandemic with the agency element of shows like 24. Partly inspired by Mohammed’s own experiences – after university he worked for Morgan Stanley in a job “somewhere between the trade floor and IT. I honestly didn’t know what I was doing or how it worked” – it’s essentially about “a bunch of misfits who have quite mundane, silly conversations, but with decisions that are incredibly important for the survival of the planet.” David Schwimmer, who is also an executive producer, plays a Donald Trump type with an antiquated vocabulary. “I don’t think he’s a nasty person, but he’s clumsy and deeply politically incorrect,” Mohammed explains. “He’s got a limited world view.” The two became acquainted while working on an unreleased pilot; later, when Mohammed realised the show he was putting together justified an American in an English workplace, Schwimmer came on board.

Wholly misogynistic, Schwimmer’s Jerry Bernstein has a glaringly obvious problem with race, too, the issue primarily manifesting itself in the relationship between Jerry and Joseph. “I feel very comfortable writing all the stuff to do with race because I feel I can own that in a way, while, say, a white writer would have to justify some of the words. I have experienced racism and can offer a unique perspective,” says Mohammed, whose father is from Trinidad and mother is from Cyprus. “I’ve not really ever talked about race – [in my stand-up] I’ve never done a show that relies on the fact I’m not white, but this is the first sitcom I’ve written on my own. The more I started writing dialogue for these characters it just felt quite a fun area, particularly the dynamic with Schwimmer.” 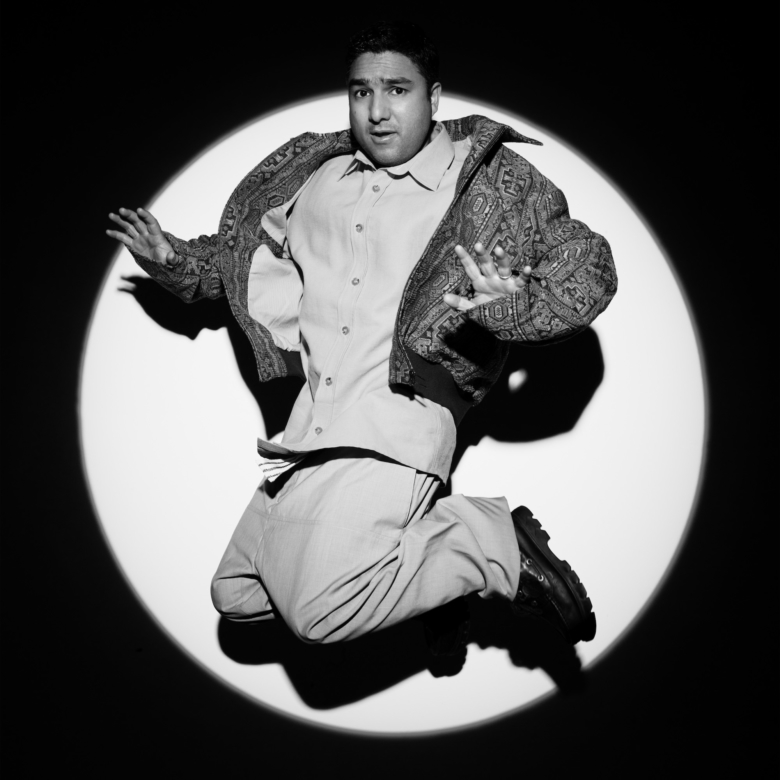 Nick wears jacket by QASIMI, shirt by NANUSHKA, trousers by QASIMI and shoes by KICKERS.

This new territory was highlighted in an interview with Channel 4’s Krishnan Guru-Murthy last summer, where the pair explored authenticity in comedy. “Ownership is very important, and part of that discussion was, where do you draw the line in comedy in terms of what’s offensive? I think the simple answer is there’s no single line, it varies depending on who you are,” Mohammed asserts today. “That line is also blurred, it’s transient as well, so there’s no easy answer. Ultimately, it’s about being able to tell and craft a very original joke – anyone can do something that sounds or feels gratuitous for a cheap laugh, but if someone can shine a light on a particularly sensitive or raw topic, while owning it and making a valid point, that’s a good thing. It encourages people to look at things in different ways.”

In its second series, Intelligence will be going in harder on multiple fronts: episode four, for example, sees the ensemble attending a workshop on harassment, bullying and discrimination, mirroring the work that public institutions do in their annual review, Mohammed says. “It does tread a fine line, some of that material, but we really stand by it,” he notes. The comedian Morgana Robinson, in character, will lead the session, while Diana Morgan also guest stars in several new episodes. If this sounds like the beginning of a new, more earnest approach, however, fans needn’t be alarmed: Little Mix and Pom-Bear crisps are both given a comedic platform in the series opener, while certain events of 2016 are called into question. 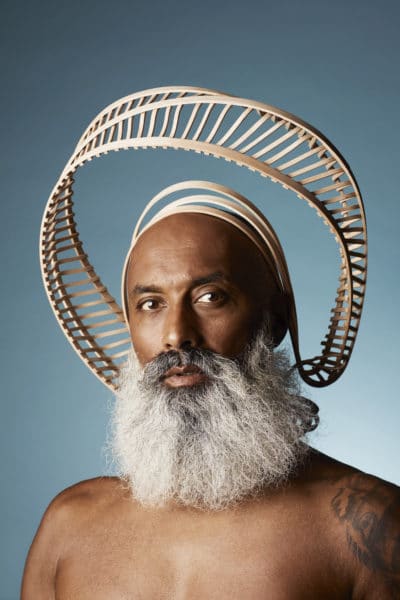