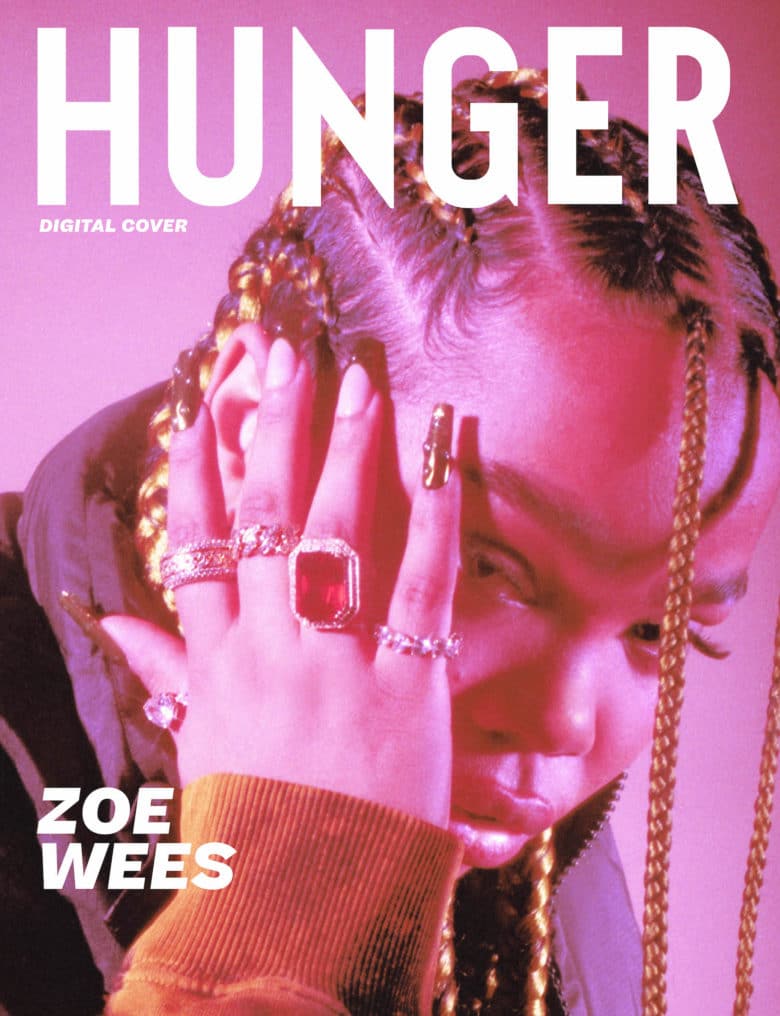 Jumper and trsouers by DIESEL at ZALANDO, vest by WEEKDAY, sunglasses by GENTLE MONSTER, shoes by ADIDAS and jewellery by ICEROCKS.

If you don’t know Zoe Wees yet, you will soon. For those not yet in the know, here’s the recap: the 19-year-old musician, lyricist and singer spent her childhood in Hamburg, listening to the uplifting strains of pop powerhouses like Jessie J — the influences of which can be heard today in the vocal intensity of her emotionally charged pop songs. Lyrically, however, she’s a much closer fit to the likes of Billie Eilish, with a candid and diaristic approach to writing that sets her apart from her Gen Z contemporaries. Indeed, it’s when she’s most personal that she strikes the most resounding chord: whether it’s her struggles with benign rolandic epilepsy on debut “Control”, sexist beauty standards on “Girls Like Us” or fake friends on latest track “That’s How It Goes” featuring 6LACK.

Already bagging over 800 million global streams, she released her debut EP Golden Wings last May — a space for her to demonstrate a lyrical and vocal maturity beyond her 19 years. A contradiction of emotional softness and vulnerability underpinned by steely talent and ambition, Wees is demonstrating the multifaceted realities of being a young woman today, bravely speaking her truth to a worldwide audience which takes inspiration from her triumphs.

Below, we catch up with the rising musician to talk about her entry into the music industry, the importance of self-love and latest single “That’s How It Goes” featuring 6LACK. 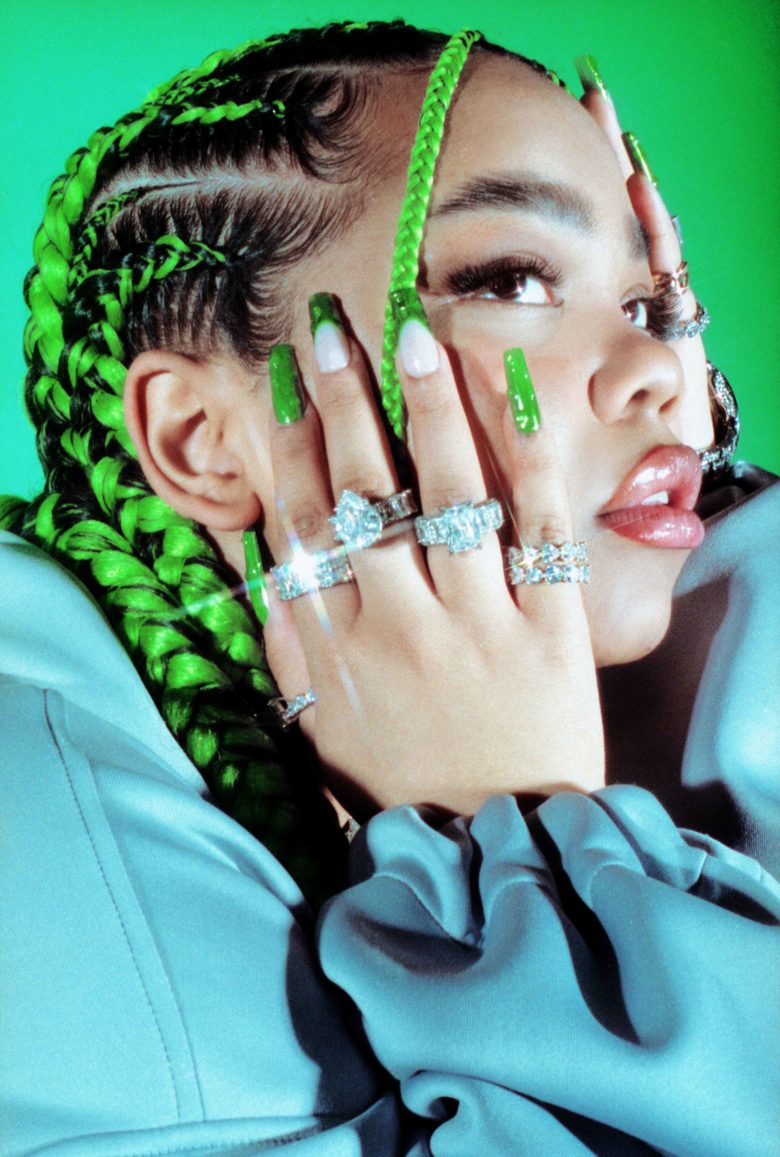 Jacket and trousers by SF1OG, jewellery by ICEROCKS and shoes by ADIDAS. 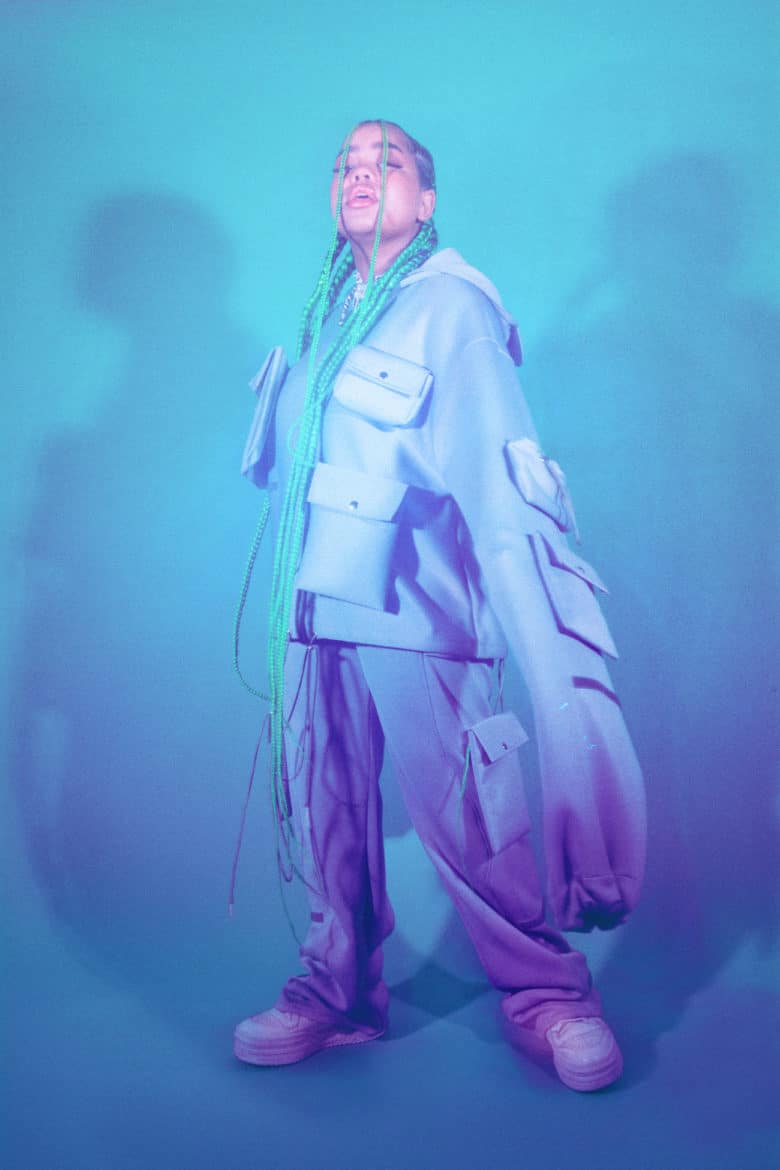 Jacket and trousers by SF1OG, jewellery by ICEROCKS and shoes by ADIDAS.

"There are so many emotional ups and downs that come with being an artist."

What sort of music did you listen to growing up and how has it affected you musically?

When I grew up I listened to Jessie J songs a lot because she and her songs have a real message. For me it was always nice to listen to artists who inspire me in a way that affects my life…in a good way. Also Michael Jackson inspired me a lot in this way.

And what was your entry into the music industry like?

At school one of my teachers met me at a concert and asked me if I was interested in working on my voice. We had some sessions at school until he introduced me to his friends – producer-songwriters Patrick Pyke Salmy and Ricardo Muñoz. They invited me over and we instantly started making music together. We spent around 2-3 years getting to know each other before we actually released my first song “Control.” So here we are…. The music business is tough but it can be a lot of fun, too.

You’ve become influential on TikTok and Instagram, in what ways do you think social media is changing the music industry?

I feel like social media is changing the music industry in a good way. It’s also getting more real, people open up a bit more, and especially artists are showing themselves in a more authentic way and even showing themselves without makeup. But it can also be overwhelming for artists and the fact that you have to take care of it all the time can be very exhausting. It’s certainly not good for any artist’s mental health or for their creativity. We still belong in the studio and on the stage.

There’s a candour and honesty to your lyrics — why is that something that’s important to you?

For me it’s always important to write lyrics that I really feel. I don’t ever want to write songs about something I haven’t actually been through. I need to feel every single word and I need to feel the pain. And I mostly write about bad things that happened in my life as it helps me to get over them. That’s why I really want to be honest and I feel like honesty is the most important thing when it comes to songwriting. 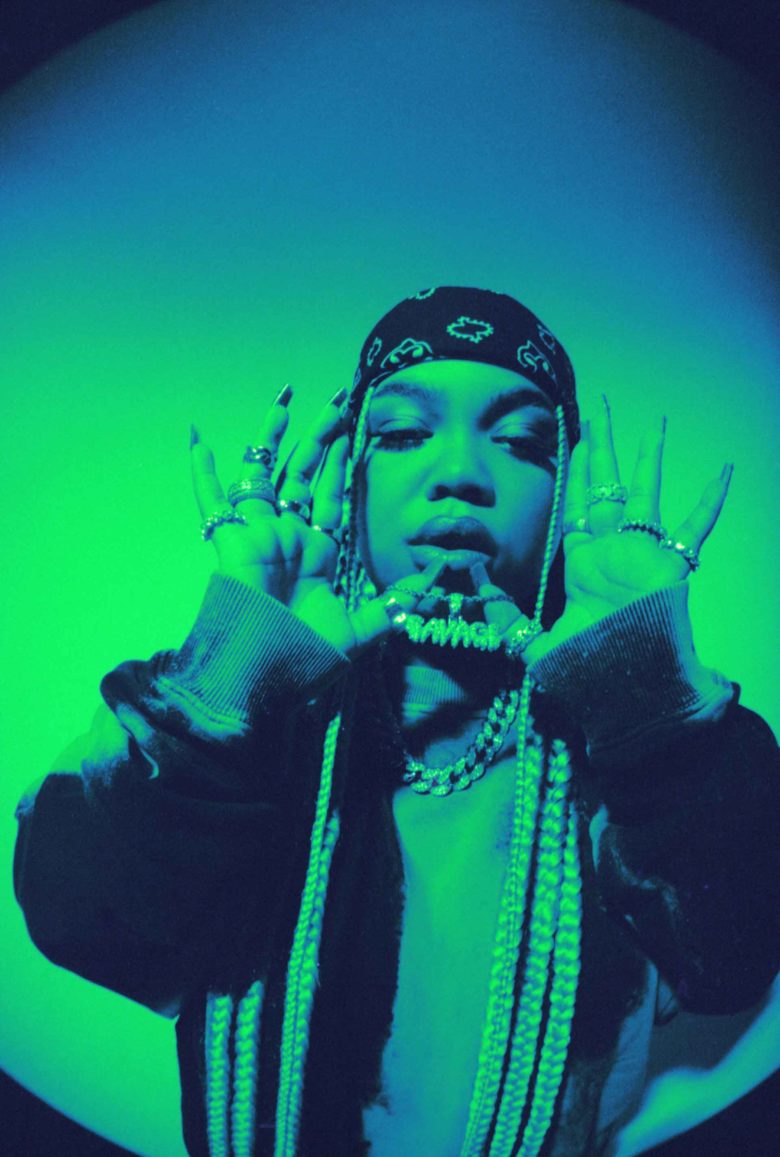 Tracksuit and top by HEMSLEY LONDON and jewellery by ICEROCKS.

You’ve been outspoken about your mental and physical health through your music — do you think there is enough of a conversation around how artists can look after their mental wellbeing?

I think artists tend to be more sensitive. Almost every artist I know is really sensitive and many of them have struggles with their mental health. And speaking from my side: being a 19-year-old Black girl in the music industry can be tough sometimes. When you enter this business at such a young age you kinda skip the part of finding yourself and being you. And there are so many emotional ups and downs that come with being an artist that you really have to be careful about your mental health. So this conversation is important and definitely needs to continue. People need to talk about it more often and more open.

What’s been the biggest moment of your career so far and why?

The biggest moment of my career so far was probably when I got the news of reaching Gold-status in the US with my debut single “Control”. This is a big deal for me since it’s one step closer to coming to the US where I’d like to work. Another big moment was playing my first live show because this is what I’m missing the most, just being on stage and performing my songs in front of people.

With your track “Girls Like Us’ you spoke out about oppressive beauty standards — what’s been your journey to finding your personal style and celebrating yourself?

Finding myself took me a while and I’m not at the end of this journey yet. I’m still not at the point where I love every single thing about my body. But at one point, I looked in the mirror and realized that it doesn’t make sense to hate myself anymore. And I didn’t want to waste any more time on this. I got to stay in my body for the rest of my life so I better start to enjoy it. Saying “I love you” to yourself really is the best thing you can do. 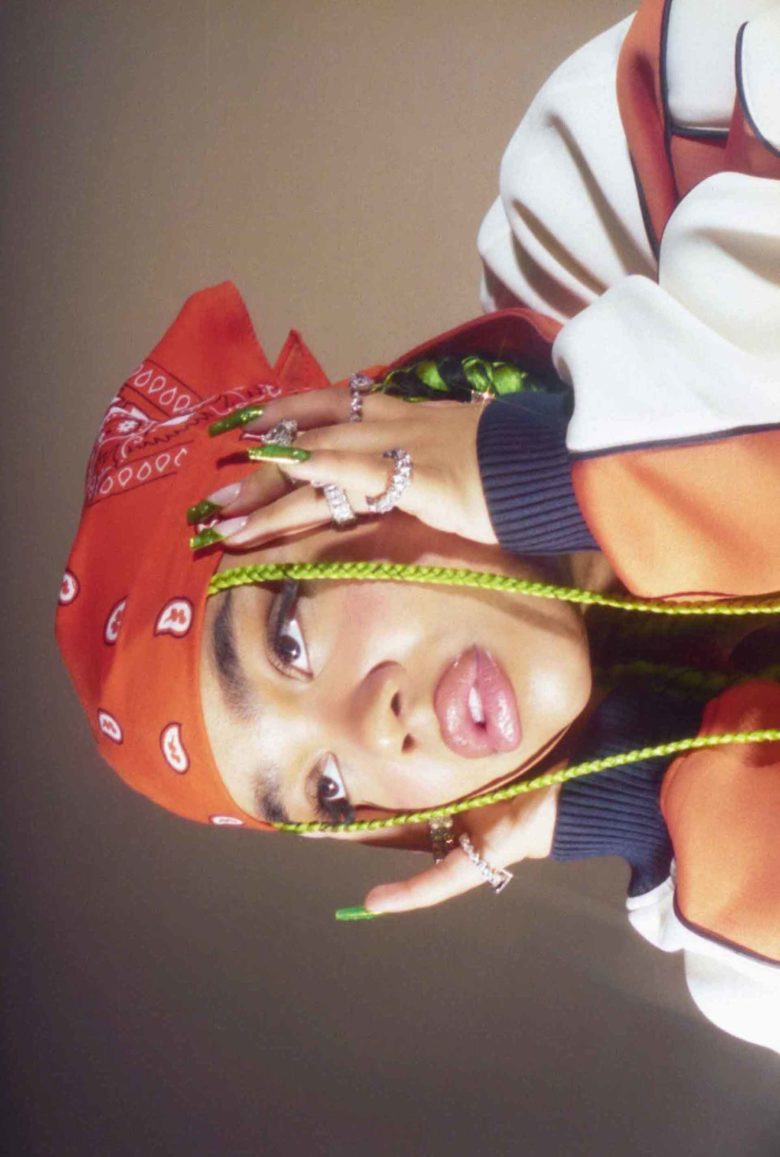 Tracksuit and top by HEMSLEY LONDON and jewellery by ICEROCKS. 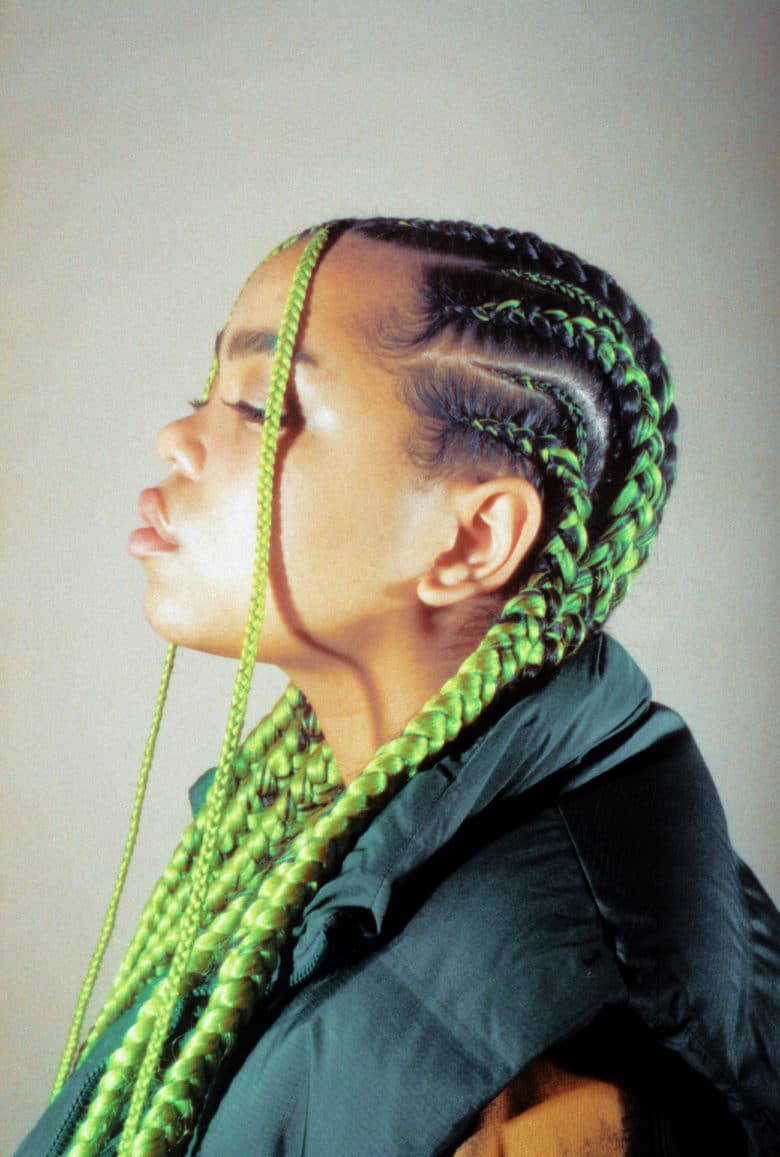 Jumper and trsouers by DIESEL at ZALANDO, vest by WEEKDAY, sunglasses by GENTLE MONSTER, shoes by ADIDAS and jewellery by ICEROCKS.

"Saying 'I love you' to yourself is the best thing you can do."

You released your debut EP Golden Wings this summer, what did the release represent in terms of your artistic growth and expression?

The release of Golden Wings was a huge step since it was very important for me to finally share more songs and more stories. It’s a great feeling to show people something so personal you worked on for a long time.

Let’s talk about your latest single, “That’s How It Goes” — what does it mean to you and what message does it put across?

“That’s How It Goes” is basically about friends leaving me alone when I’m feeling at my lowest. And with the song I just wanted to say kind of “Fuck you all, I decide my vibe, I do my thing and you do yours but don’t come crawling back to me”. And I kinda started to get in touch with this darker side of me which I get along with pretty well actually.

On the track, you work with the Grammy-nominated artist 6LACK — what was the collaboration like and what other artists would you like to work with in future?

It was so nice working with 6LACK. He’s extremely talented, very humble, really down to earth and just amazing at what he’s doing. I feel so honored to be able to work with him. For future collaborations I’m pretty open as long as there’s a good vibe between us.

As a final question, what’s next for you?

I’m always working on new songs and thinking about what to release next but for now we’re working on our first US-trip which I’m super excited about. I’m also preparing for my first tour through Europe in March and April next year with my band. And finally meeting my fans in person is the most important thing for me that hopefully comes next, too.

Zoe’s new single with 6LACK, “That’s How It Goes”, is out now. Check out Zoe’s UK and Europe tour dates here.

Nominations for the BRIT’s Rising Star Award have been announced 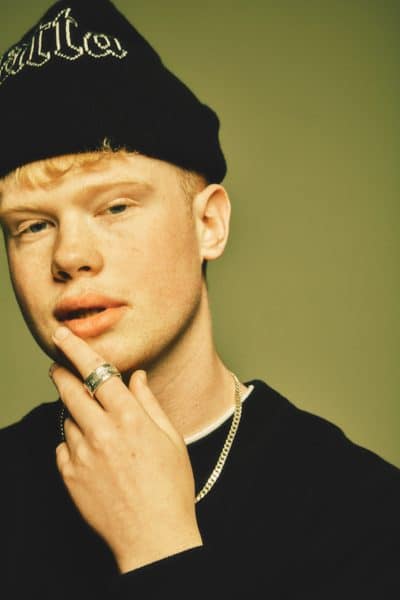