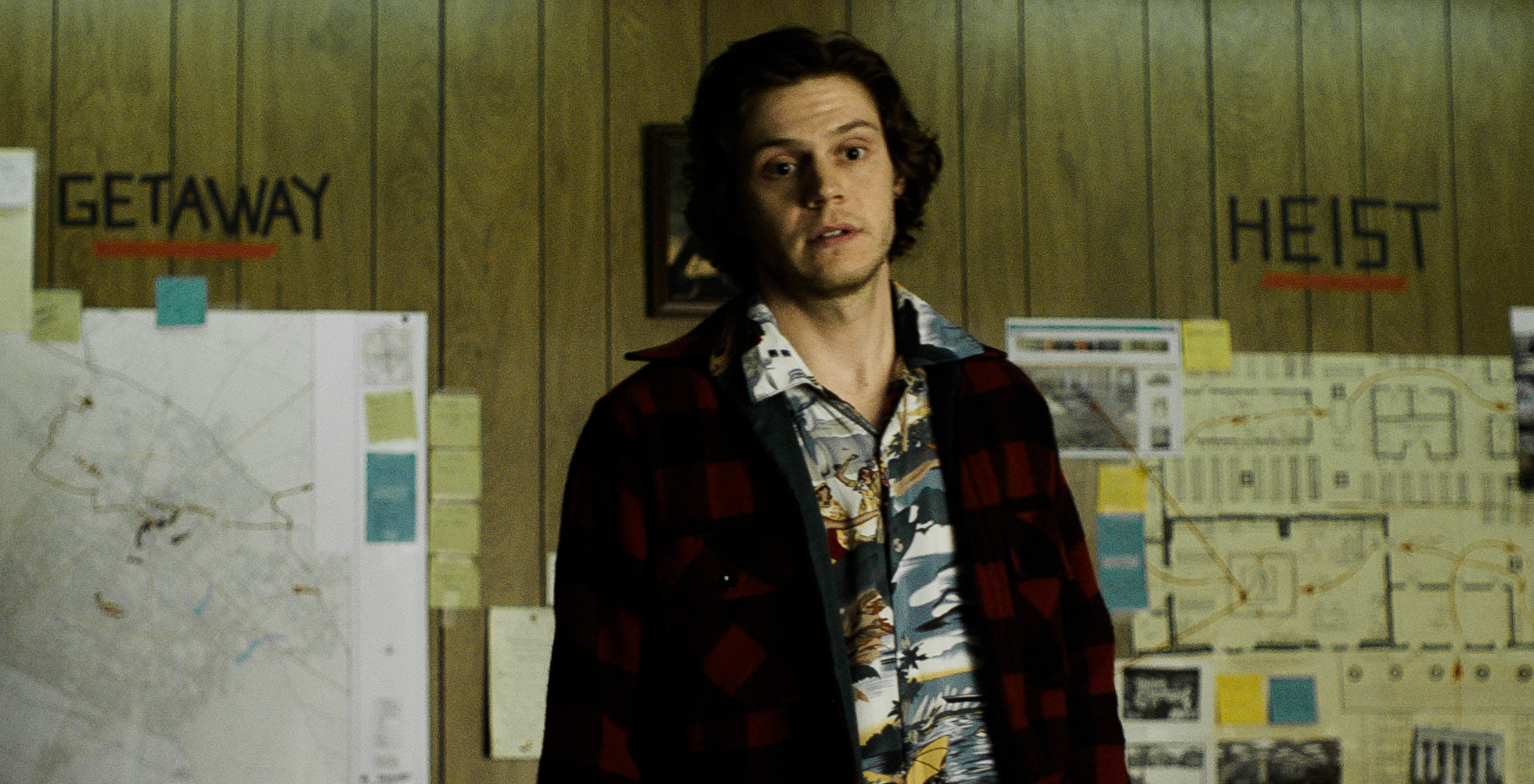 Having put his all into his projects since the breakthrough role of Tate Langdon in American Horror Story, Evan Peters has become an actor renowned for his intensity. At just 15, he found a dedication and desire unlike many of that age do, for acting: deciding to throw himself into that future from the get-go, his passion has brought him down an exceptionally intense path.

For his latest, Evan’s stepped into another potent world: Bart Layton’s debut feature film crosses the boundaries of cinematic expectations, and draws us into a story told unlike any other. American Animals merges the smooth glamour of heists, the harsh grittiness of documentaries, the sharp wittiness of comedy, and the emotionality of drama. Evan Peters does the same: as snappy as he is calm, as frivolous as he is meaningful, Peters’ Warren Lipka becomes almost more lifelike than his real-life, on-screen counterpart. We caught up with the dexterous actor to find out how he got to where he is, and how he got inside the mind of who he’s become… 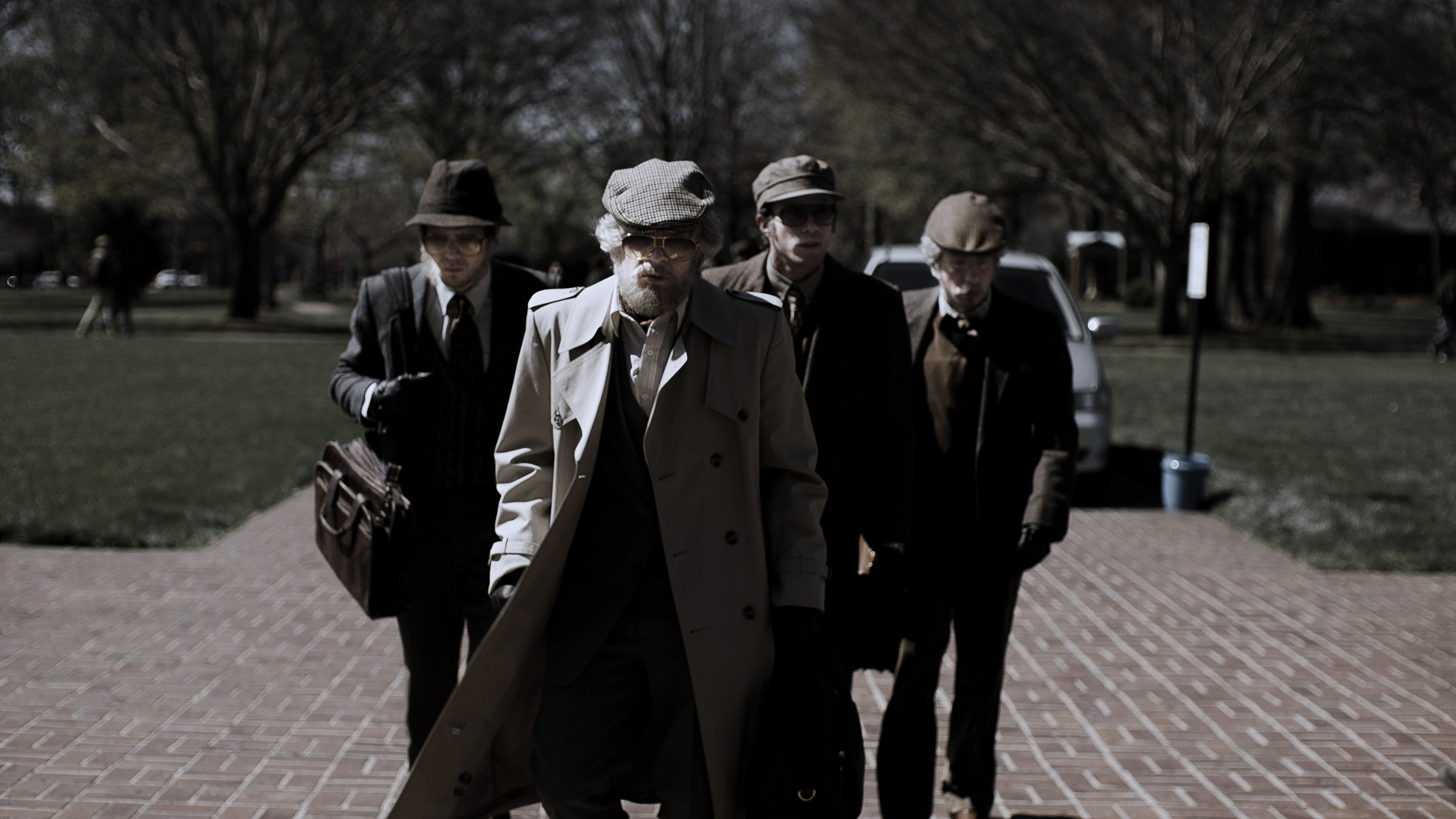 Do you remember the moment that you fell in love with cinema?

Oh man, yeah. When I was a kid around 3rd grade I can remember how I was just so in love with coming home after school, getting on my bean bag chair munching on some Pringles and a ham ‘n’ cheese sandwich then just sitting and watching shows. That then went into SNICK nights, where I got really into Are You Afraid of the Dark and would watch The Secret World of Alex Mack, and that block of TV. But when the TV shows weren’t on I’d do the exact same thing but would put on movies. I’d put on Tommy Boy or Forest Gump or Ace Ventura, I loved being transported into their worlds and loved emulating the characters: doing what they did, telling the jokes they’d tell, eating what they were eating. I would definitely try and be the characters in my favourite movies like a lot of kids, but I was always a little bit more obsessed than my brother, for example. My brother would be like “Ugh are we watching Tommy Boy again”, but I would just love watching the same movies over and over.

I’d put on Tommy Boy or Forest Gump or Ace Ventura, I loved being transported into their worlds and loved emulating the characters: doing what they did, telling the jokes they’d tell, eating what they were eating.

That’s interesting considering Warren’s obsession with movies, to emulate movie heist robbers in his favourite movies. Did you relate to that?

Oh, yeah, definitely! It’s a little scary really, I mean Tommy Boy isn’t always doing the best things… (laughs) Obviously they are pretty harmless, but it’s definitely true that you pick up traits like that, especially when you’re young and easily influenced. People start to emulate what they see people doing in movies, it’s no wonder people worry about what their kids are watching.

American Animals really looks at how we get so immersed in cinema and why we become so obsessed.

I was thinking about how it’s such a fine line between enjoying cinema and being aware that it isn’t real, that it’s an alternate reality. It’s quite odd to be on both sides of that, where you have to be aware of the influence you’re going to cause as an actor, and both going into a film and not being influenced by it. 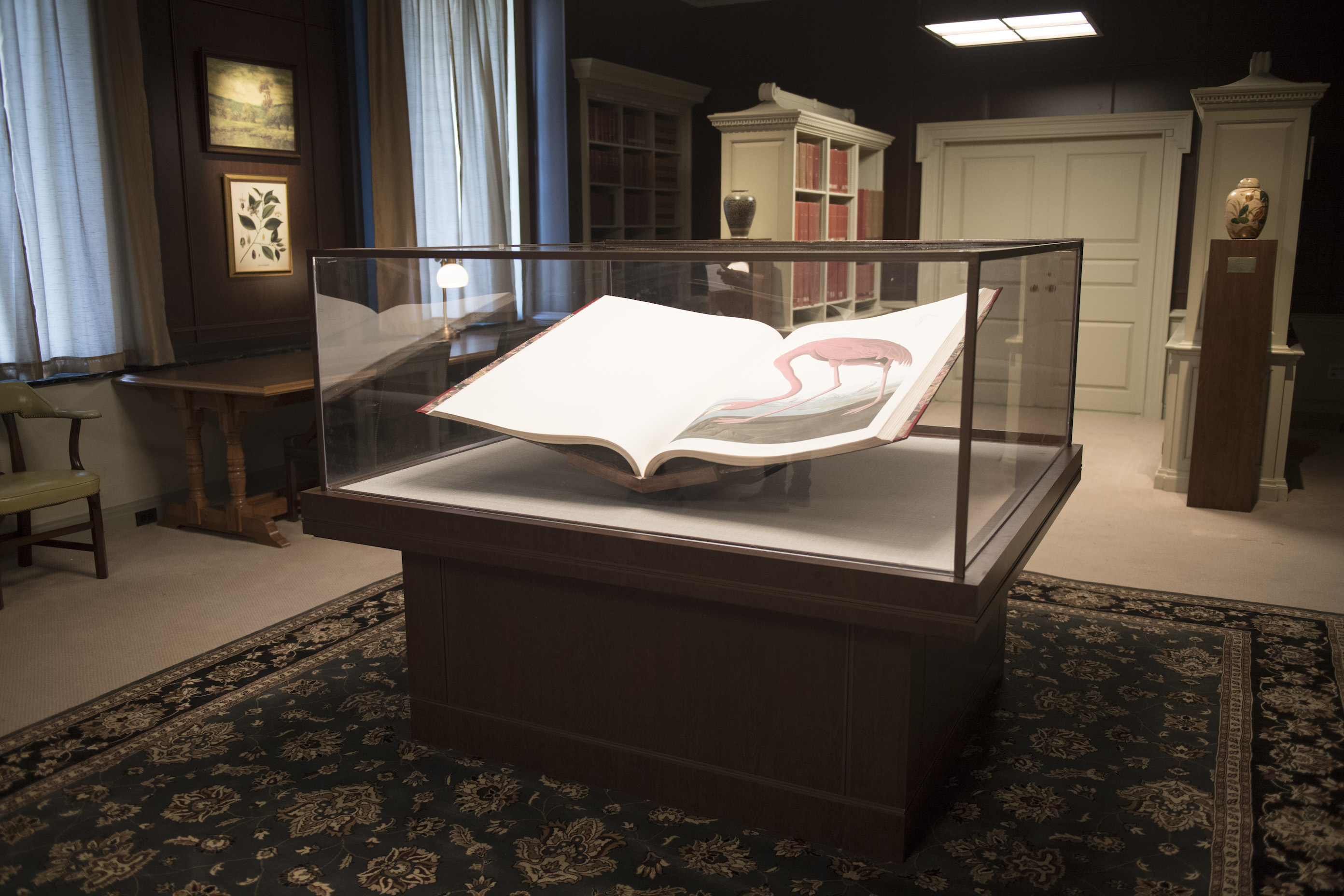 There’s also a play with fantasy and reality in American Animals, where there’s a contradiction between what people think is happening compared with what actually is…. How did you find acting out a real story whilst keeping that fictive distance at the same time?

Right, that’s what happens to these guys! They step out there and they cross the line of fantasy and reality. “It’s a fantasy, it’s a fantasy”, they tell themselves. Then BOOM the moment that they pull the trigger on the heist it becomes very real, and it doesn’t work out the way that it does in movies. It becomes absolute chaos. Frankly, if I got some harbouring idea to do this, this is definitely how it would turn out. (laughs) I’m not qualified to be a criminal by any means, and I would totally panic and run and it would all be a mess.

Right! There’s a humour like that in the film, as you’re watching them recount it, you act it out… It’s not really a genre film at all.

You got it. I think when I read the script I saw that: it was written as it appears on the screen with the documentary elements within, pretty much word for word. I fell in love with that, it made it so real and exciting; it gave it so much more gravity, but also really raised the stakes. As it goes you really can’t tell if it’s going to succeed or fail, if you should root for them or not, it was such an exciting script to read that I just sort of approached it with awareness that I wanted to get the reality of it right. I really wanted to reach out to Warren and the rest of the guys and get to know them, talk to them, get in their heads, but Bart [Layton] from the offset said we shouldn’t do that.

How did that change the process for you?

I think it sort of made the film feel like two movies in a way: ones a documentary and the other is almost a re-enactment. Well, a bit better than a re-enactment hopefully (laughs). Simply, it is sort of a movie version of what they’re talking about, and I think that as a viewer you get swept up into the fantasy of the slickness, of their dream heist. There’s the smooth Ocean’s Eleven style heist and as a viewer you’re like, oh yeah “that’ll be how it goes down”, but then you’re in the fantasy like they are. So instead, Bart cuts that right down the middle with the harshness of their reality, hearing the stories from them and from their families, slowly finding out as the reality unfurls. I think that what makes the film affecting is the real guys, so I wanted to make my portrayal as real as possible. We saw some of the documentary footage which really helped, I managed to get into Warren’s head and try to understand why he was doing what he was doing. 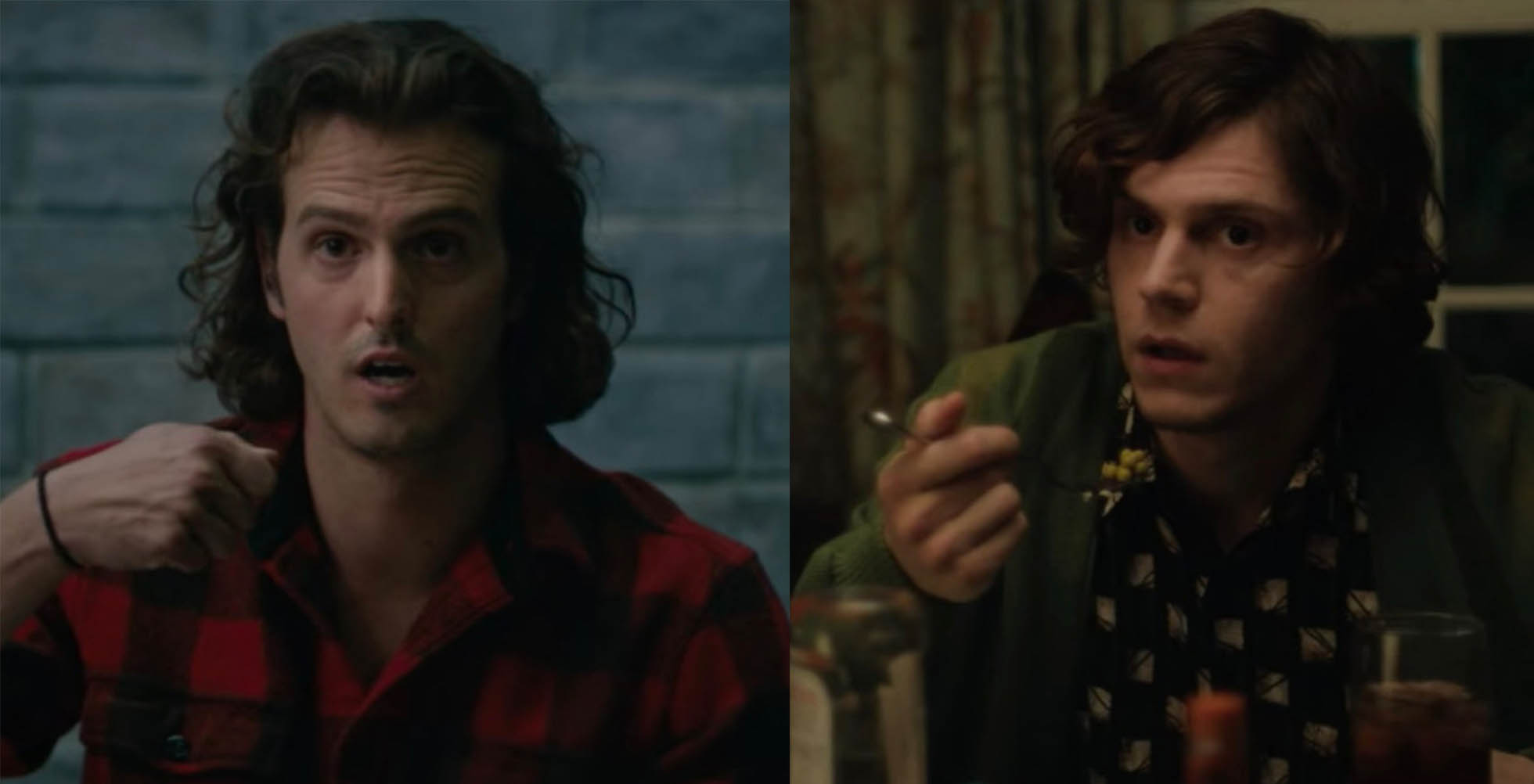 Did you relate to Warren?

In a weird way I did. Obviously I don’t feel like I’m anywhere near as drastic as Warren, but in some ways. I mean, when I was 15 I got this hare-brained idea to become an actor. (laughs) I was like “I’m going to do it I’m going to be in movies and TV shows and it’s going to be great”, at fifteen! I didn’t know what that meant, what that would entail, I didn’t know anything! My mum was so great and came out with me, and my father was too, they were so supportive which was awesome. But I felt inside this notion that I wanted to get the most out of this life – not sure if I was having an existential crisis at 15, but I felt like I wanted to just go for it. I didn’t want to go down the path that I saw everyone else going down, I felt a yearning for something exciting and so I went for it. I think that doing that gave me a feeling alike to what Warren felt, sees that everyone around him looks at the world in a certain way, and wants something different. He wants to get millions of dollars and retire early to go live on a yacht in Bali, so he can get out of it and do something different. I get that, that “Why are we here?” question that makes you want to do something, anything, that’s not thought out and probably not realistic.

I get that, that “Why are we here?” question that makes you want to do something, anything, that’s not thought out and probably not realistic.

It’s one of quite a few emotionally intense projects that you’ve taken on now, do you feel that it takes its toll on you?

Yeah I think so, I love every thing that I’ve ever worked on so much that I put in 120% so I think I lose track a bit. But it can take a toll on you, some of it is so intense and you have to protect yourself and be careful sometimes. I’m not done with intense roles because I love performing them and being a part of them, but I think now I’m craving something a little lighter, a comedy maybe. Something goofy. Actually, in the next season of American Horror Story I have a more comedic role which has been really fun, it’s been good to play around with it and to laugh on set. It’s made me find that there is a lighter side to acting, that comedic side, but I do love doing both. I think that just now I’m excited to do something lighter right now, and then go back to intense roles.

Is there something you look for in a role?

I’ve been pretty all or nothing in acting, I look for something that I can give my all. I just did a show called Pose where I dove in headfirst, and I found it so enlightening. I feel like I grew a lot as a person from that, which is exactly what I want out of it, I want to go for roles that will enlighten and educate me, I want to come out the other side as a stronger and improved person. I love doing research on my projects and characters, I mean you dedicate 6 months or whatever the character for an hour and a half film, so you want to do it justice. It’s great to be able to work with incredible directors, crew and cast, I’ve learnt so much from everyone I’ve ever worked with and that’s so important to me.

Oh man, this is something I should really have prepared isn’t it! (laughs) You know who I’d love to work with right now, who I’m such a fan of and admire his work and career path, is Ryan Gosling. He’s kind of the man: he does comedy incredibly well, he does drama incredibly well, he’s directed a film, he’s just a nice guy and I’d love to figure out how he does what he does.

What five films have shaped you as an actor?

I absolutely love Tommy Boy and Forest Gump… In my later years I love Drive, I love Never Let Me Go – one of the saddest movies I’ve ever seen. And then finally I love Dirty Dancing, it’s a classic, it makes you feel love at the end of it.

How do you feel as an actor right now in the social media age of film?

It’s hard to say, I think it can be positive and negative. So many careers have been hurt by social media, by Twitter especially, the list of people is endless. But then again, it’s such an incredible way for people to interact with their fans and see what everyone’s doing, what’s in the zeitgeist. So it’s just something you need to be aware of and careful about, to be smart and not abuse it. It can be easily abused and it can easily abuse you.

I’m just looking for some new projects, to find new people to work with and learn from. Make some great experiences making movies and TV. Keep on keeping on.

American Animals is in cinemas now.