“I’ve got some bad news… the worst news,” I tell Tom Coll, the drummer of Fontaines D.C. “Oh no, who is it?” he laughs. “You clash with Diana Ross,” I wince, as I look up from the Glastonbury Festival 2022 Clashfinder on my phone.

We’re at the band’s HUNGER cover shoot at Hangar34 in Liverpool, where the Dublin band will be playing an intimate gig later that evening, and the timings of the Glastonbury line-up have just dropped. I’m sharing the news that the band will be playing at the same time as the Sunday legends slot – hands down the most popular show of the whole weekend. They’ll be playing the next biggest space, the Other Stage – which is no mean feat to pack out on a good day, let alone when you clash with one of the most famous people on the planet.

“Ahh, we’ll be OK,” Coll says with another laugh. And I believe him, especially if their last visit to Worthy Farm, in 2019, was anything to go by – the band ended up playing five times across the long weekend, starting with a “big break” performance on the John Peel Stage, when they stepped in for an absent Sam Fender. “I think that was a pivotal moment for us,” Coll says. “It kind of led on to the way the latter half of that year, and I suppose the first record, went. It felt like a real time of change.”

Grian Chatten, the five-piece’s lead singer, recalls the show. “We got that spot, but I can’t really remember being nervous for it. I just remember being aware of what a big deal it was, you know? But everything about the way we felt, the way that we performed – I felt like we rose to the occasion.” 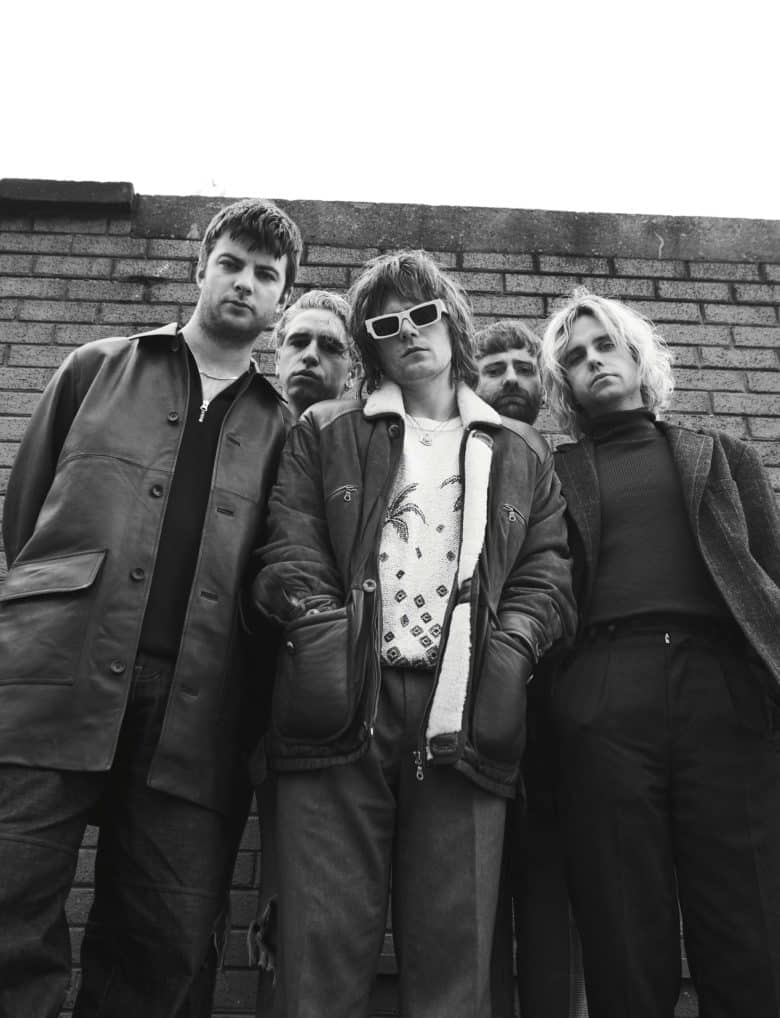 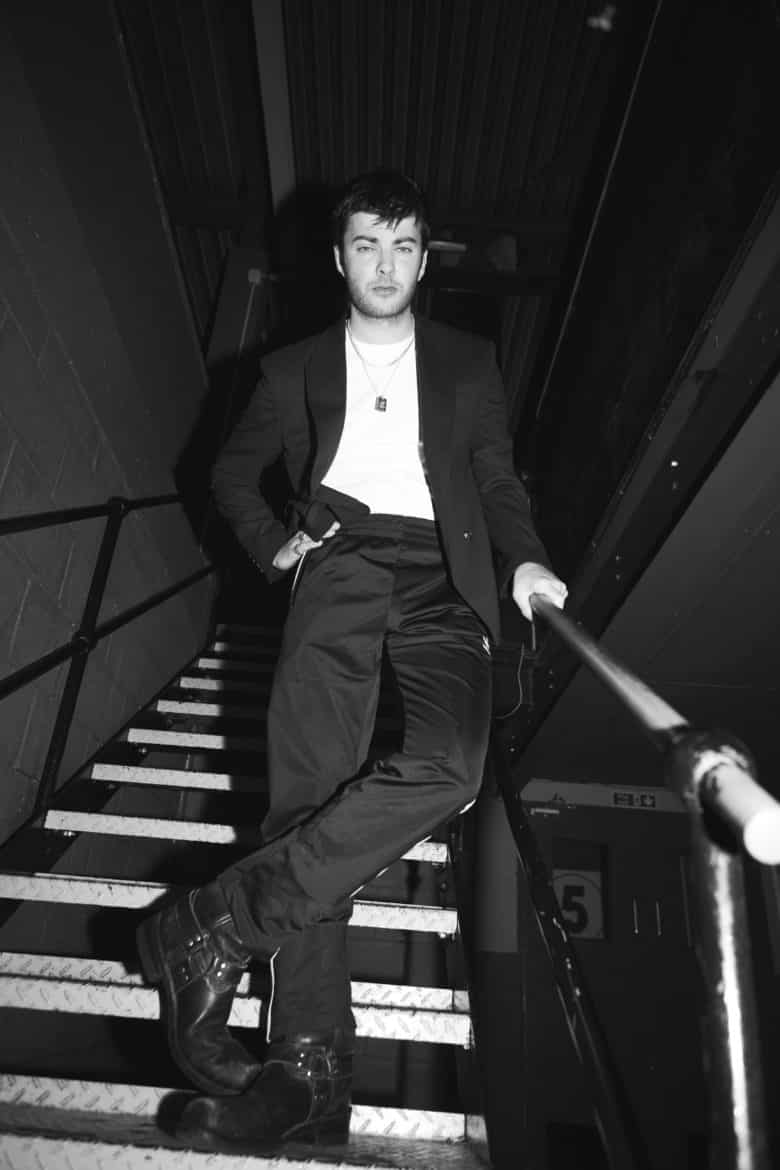 They certainly did. In fact, that gig is exactly where I first discovered the band, which comprises Coll, Chatten, Carlos O’Connell and Conor Curley on guitar and Conor Deegan III on bass. I was instantly smitten and went to see them again later on during the festival. And I have followed Fontaines D.C. from those early days of releasing their debut album Dogrel in 2019 to critical acclaim and being nominated for a Mercury Prize later that year to being nominated for a Grammy for their second album, A Hero’s Death, in 2021 – and oh, being nominated for best international band at the Brits in 2021 and winning the NME award for best band in the world this March. They also celebrated their first number one album with their third, Skinty Fia, released earlier this year.

The last time I saw the band was at a 10,000-capacity sold-out gig at Alexandra Palace in October 2021, and it’s been quite the trajectory since then, especially considering there was an almost-two-year standstill for most of the world during the pandemic. The band had just finished writing their second album when Covid hit, and after touring so hard with Dogrel they had to accept a quieter promotion for its successor. Coll admits that the lack of feedback from a live audience was difficult. “I think a lot of the creative validation that exists is obviously right in the room when you play live,” he says. “You’re kind of feeding off the audience. When you don’t have that it’s hard to gauge where you’re at or how it’s going, you know?”

Chatten is more positive about the touring hiatus. “I think it might have been good for us, in a way, that we weren’t saturating the terrestrial airwaves all the time

in terms of, like, filmed performances and festivals and stuff, because we did that heavily for the first album,” he says. “Maybe leaving the second album to be more of a private experience for people to listen to at home or with their earphones was kind of a nice move, almost spiritually, for the band – to just be a bedroom band a little bit for people.” 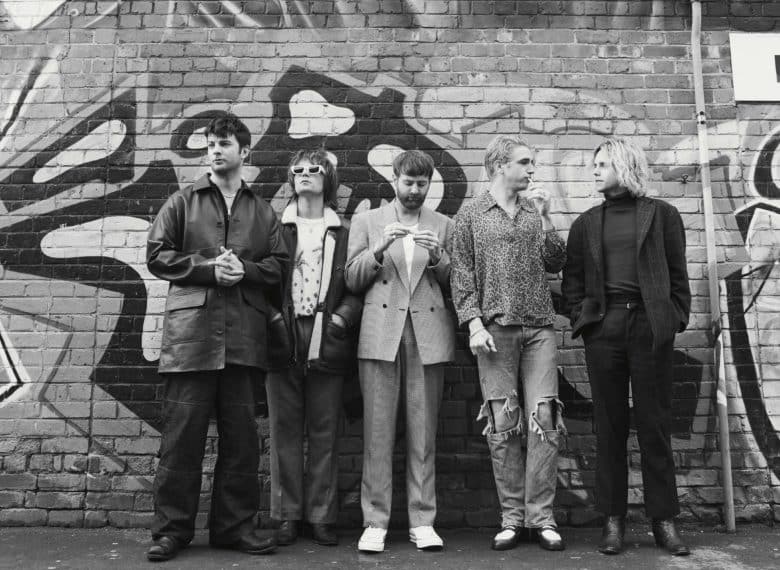 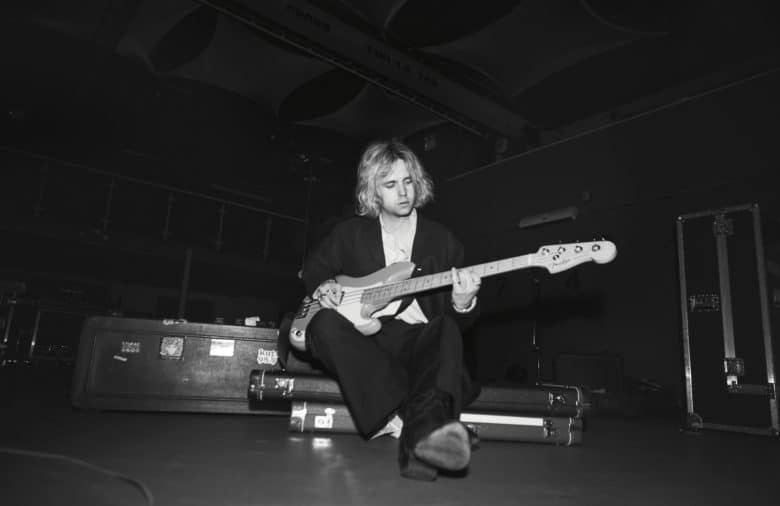 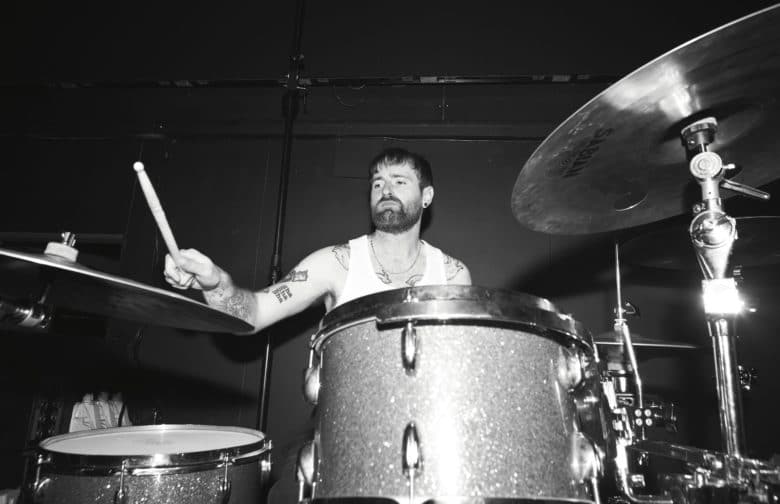 Conor Deegan III wears shirt and blazer by SAMSØE SAMSØE, trousers by HELEN ANTHONY and their own shoes. Tom wears stylist’s own vest. 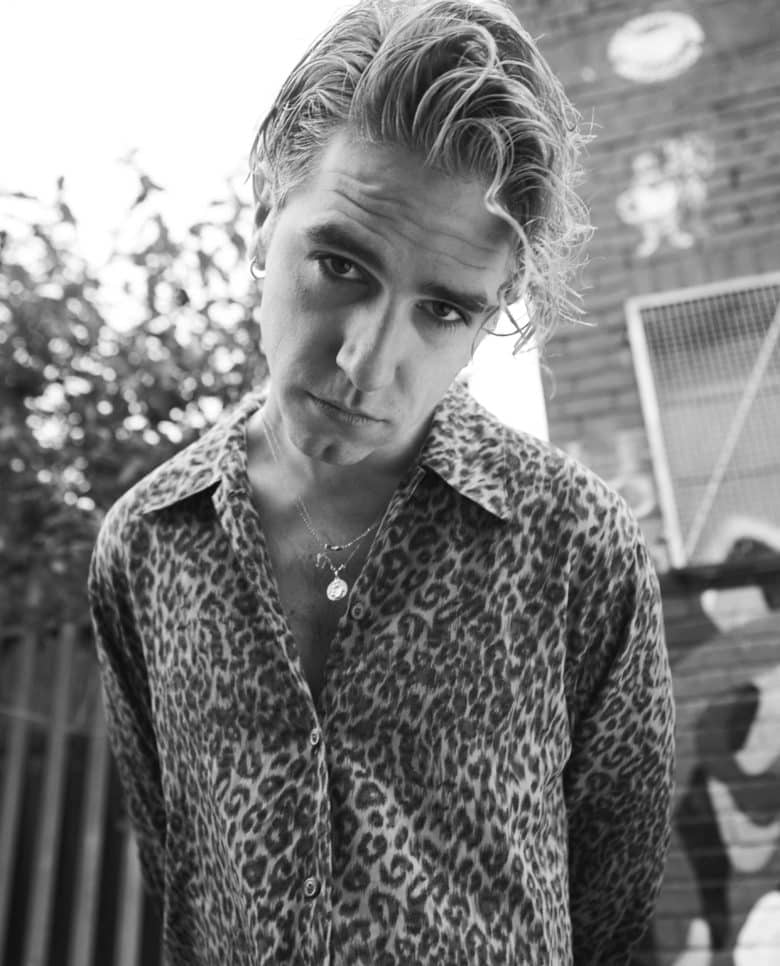 Carlos wears own shirt and jewellery.

But touring is in the band’s DNA and they haven’t really left the road since Covid restrictions lifted. When I meet them, they’ve just stepped off a tour bus from a show in Brighton the night before, they are visibly tired and an Instagram post of theirs from a week earlier explains why – they’ve played 47 shows in two months, across the UK and US. After Liverpool they have a day off before heading out on a heavy rotation of worldwide festivals, followed by UK and Ireland dates until December and then an Australian tour in the new year. It’s relentless.

“Touring is incredibly important for feeling a sense of
legitimacy. It makes us feel like we have a job, you know, in a positive way. It gives us a sense of purpose,” Chatten says. “And in this day and age that amount of touring, unless you’re a big pop star, it’s just necessary. I also find it quite creatively inspiring to move around all the time and never really let the dust settle.” He goes on to add: “It renders you sensitive towards experiences, like just being wrecked, being really tired, or kind of dirty and without a home per se. It makes you very emotional. And it can make you write yourself into a better mood.”

This particular round of touring is to promote Skinty Fia, which is a step in a new direction for the band – a cleaner sound that’s less raw punk and more considered.
Despite being called a political band from the outset, the band do feel like they have a voice with the new record. “When we started off, we kind of hadn’t realised we were political – we were spoken about as being a political band, and some people kind of said that was simply down to the fact that we were Irish,” Chatten says. “I think with slightly more confidence in our voice we’ve started to embrace it a little bit. We’re affected by things as much as the next person, you know? I mean, we’re affected by the news and I think, yes – we probably are political now.”

So what has inspired the change in sound? “I feel like we’ve grown more than changed,” Chatten says thoughtfully. “I mean, I think the capacity to write this album was probably within us when we wrote Dogrel, but we needed to write Dogrel – we needed that kind of simplicity to work with what tools we had and get that out of our system, but there was always the capacity within us to branch out. And the second record was written by a bunch of people who were very, very lost and wanted to be found. This new album was a joy to make because I felt like there was an extra level of confidence within the band and we were pushing the boat out a little bit more. Also, just the confidence to realise our vision fully, like we ran Tom’s drum track through a guitar amp for the song ‘Skinty Fia’, because that was the sound in our heads when we wrote it and we didn’t want to lose that sound in the studio.” 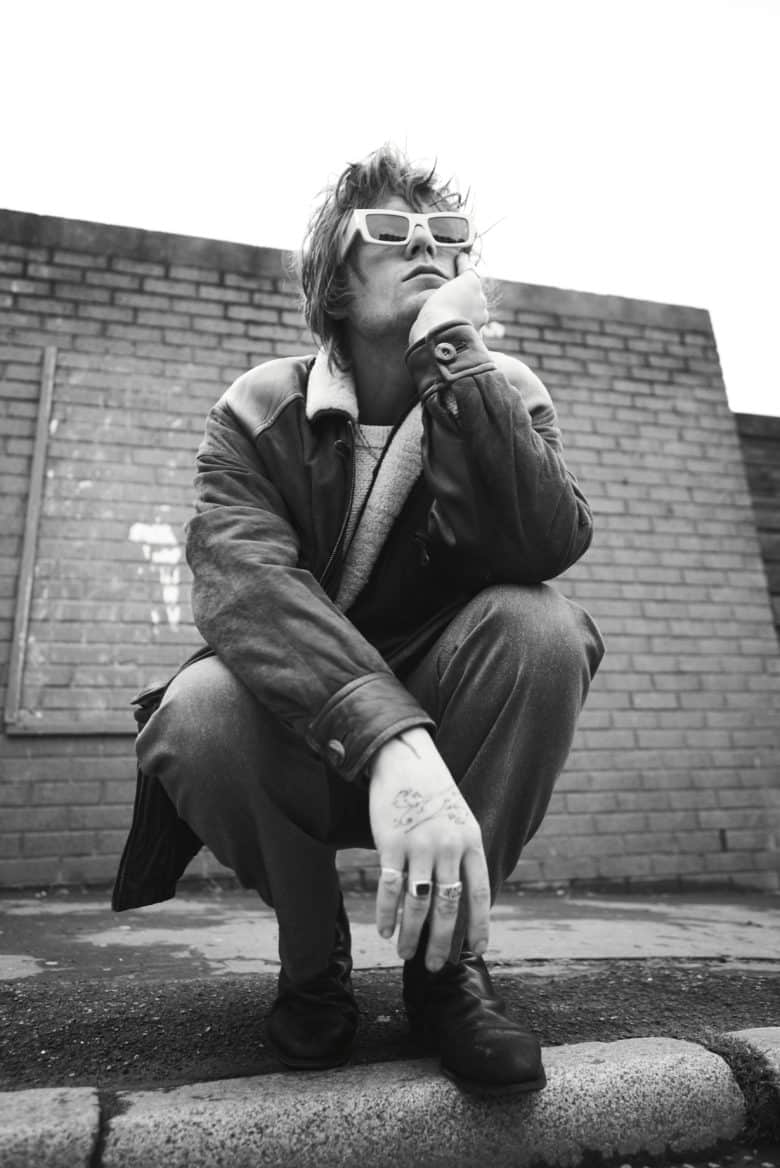 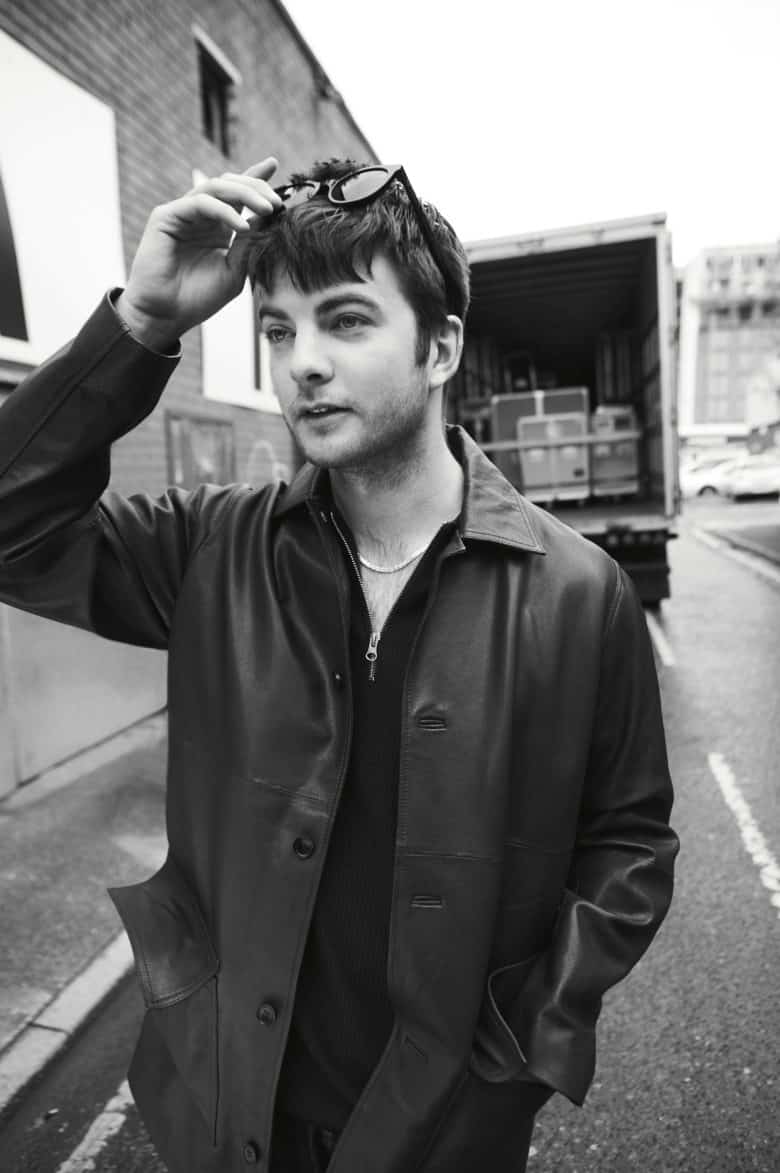 I ask Chatten where this confidence comes from. “I think age, for sure, and also we’ve been doing this for over three years. We’ve had the time to really settle into experimentation and not feel too rushed into doing anything, we’re not second-guessing. It definitely comes with experience.”

And it looks like the band are up for more experimentation with future projects: reports have them working with the British rapper Slowthai and the band have been listening to rap music for inspiration. So have their tastes changed? “I think a few of us were always listening to it and it’s become the majority now, and whatever we find ourselves listening to all together and enjoying as a unit, we kind of celebrate by using it as a glue to stay happy with each other,” Chatten says. “We have a lot of song ideas for the next album. I don’t really know where it’s gonna go. Each of us has a new, wide-eyed idea as to how the next album should sound every day. We’ve also been listening to a lot of early Korn backstage – there’s not one person in that band doing things by the book, and they just really knew what they were from the beginning. Apart from a couple of dodgy fashion decisions, but you know, they were different times,” he laughs.

And is fashion important to Fontaines D.C.? Seems so: the band spend a fair bit of time on the shoot doing an excellent job of teaming the stylist’s options with their own looks. I ask Curley where his vintage-looking shearling jacket is from. “I grabbed it while getting a coffee this morning – there was a little shop next door to the café.” They’ve nailed the rock-star look but how are the band, who made their third appearance on The Tonight Show Starring Jimmy Fallon earlier this year, taking to a life of fame?

“I used to fucking hate it because I felt like all my favourite things to do in Dublin were gone and all I could do was stay inside, and so that was really hard for a while,” Chatten says. “I hate the idea that people have the knowledge or the half-knowledge of me to have conversations about me – that’s very anxiety-inducing. I’ve become slightly more OK with being stopped on the street. It happens a fair bit in London, where we live now, and to be fair it’s starting to happen regardless of what country we’re in, but I don’t really feel famous at all.”

Coll adds: “I think my mom thought we were famous when we put out our first tunes and that’s all that really matters to me. And even the awards thing, it’s kind of more for other people than for us. Really, I feel like we don’t put that much importance on it.” But a Grammy nomination must be nice, right? “It was great,” Coll admits. “It was one of those real pinch-yourself moments, one of those things that I never thought was a possibility or a world that we would ever be in. But once the dust settles, it kind of doesn’t really mean that much either.”

So what does matter to the band? “I’d love our eighth album to be our best album,” Chatten says. “When our eighth album comes out, I’d like for everyone to be, like, ‘Oh, they’re only getting started.’ That idea really excites me. My greatest fear is just falling out of love with music. Like the poet Arthur Rimbaud – he quit poetry by the age of 21 and moved to Africa to become, like, an arms dealer. Yeah, I really don’t want to do that. Imagine how miserable and disillusioned he was.”

Well, the passion and desire to keep writing, performing and producing incredible music is still strong here, and we can’t see Fontaines D.C. swapping touring for life as mercenaries any time soon. We have no doubt this is just the start of many great albums and, whether they want them or not, a long list of awards and accolades. 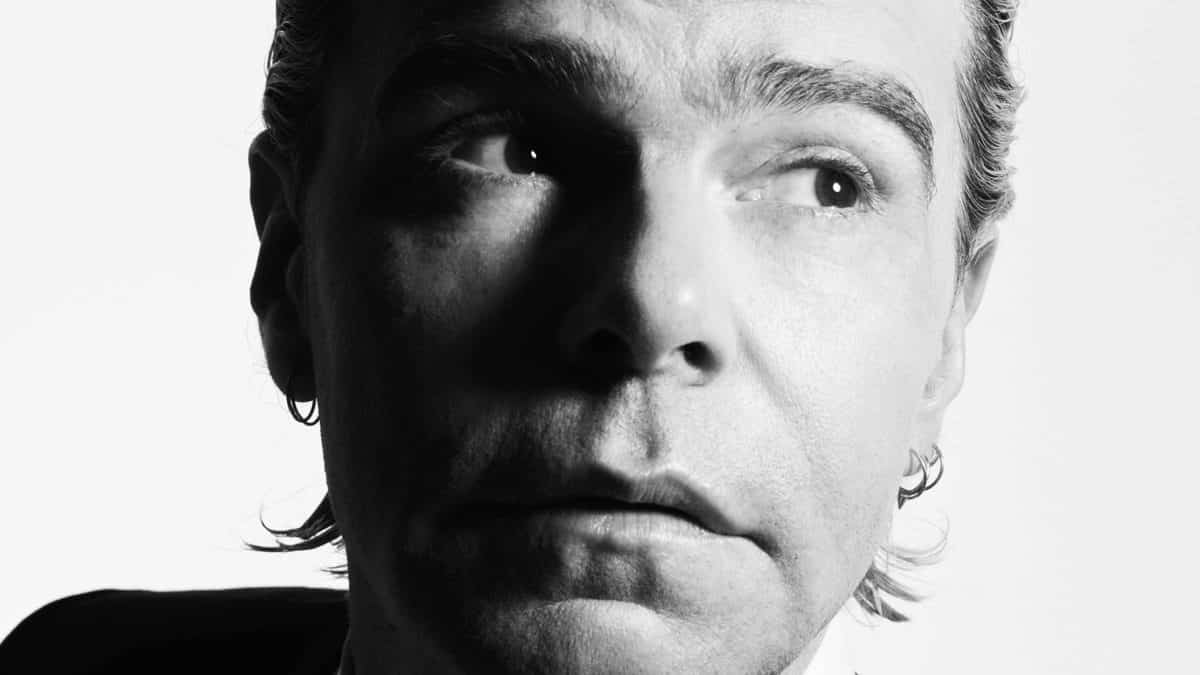 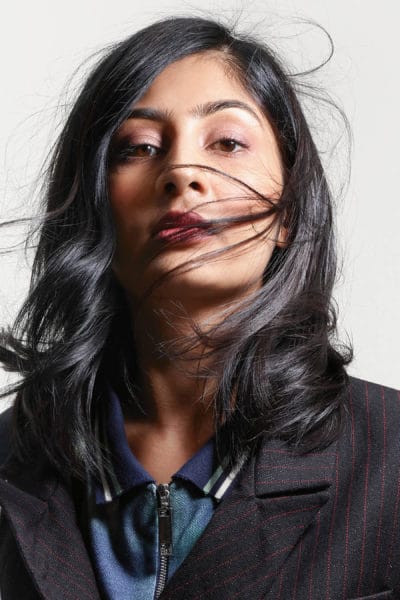 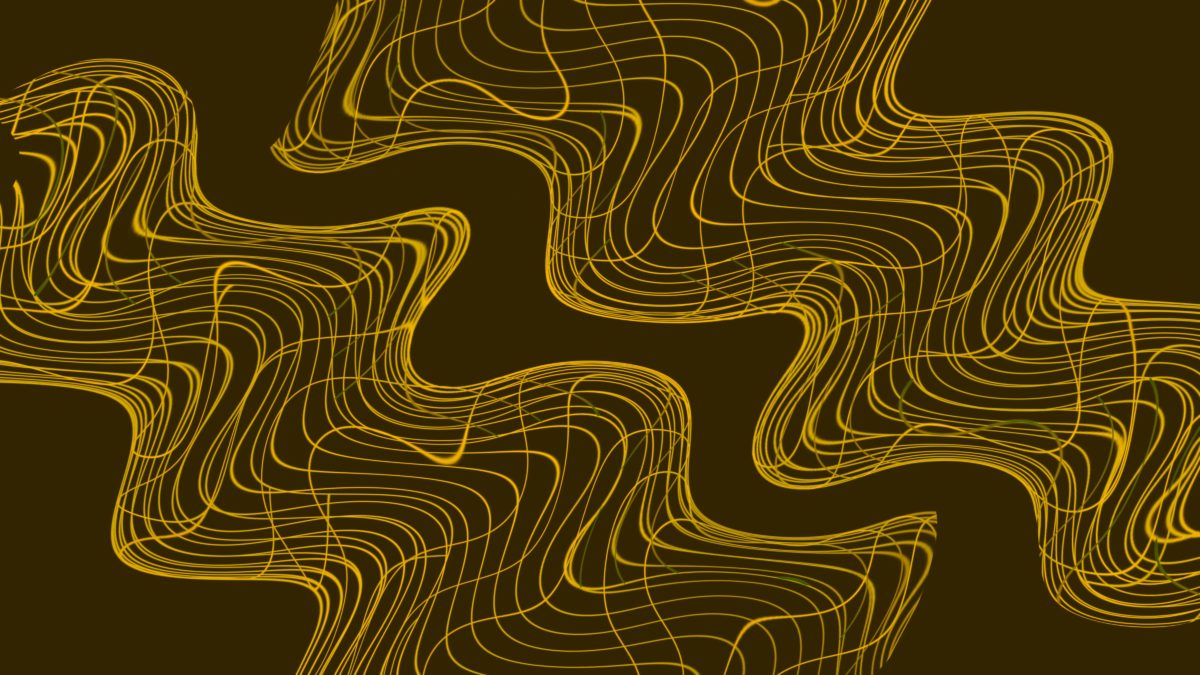 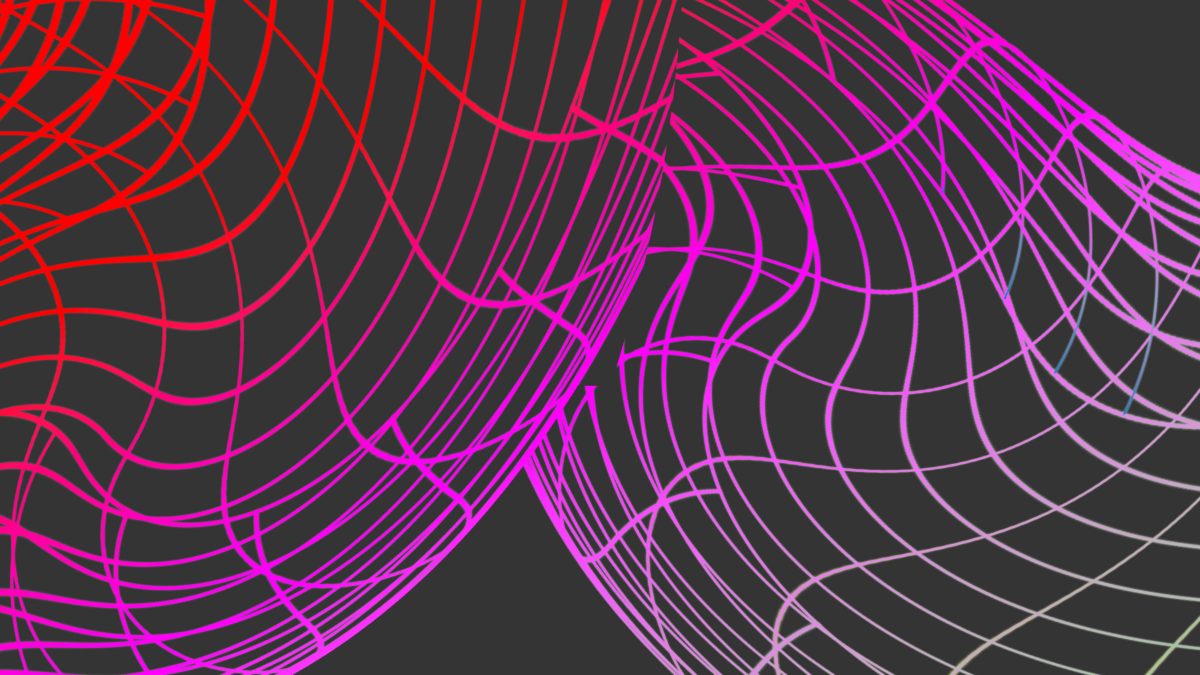 Sex in the metaverse isn’t all fun and games 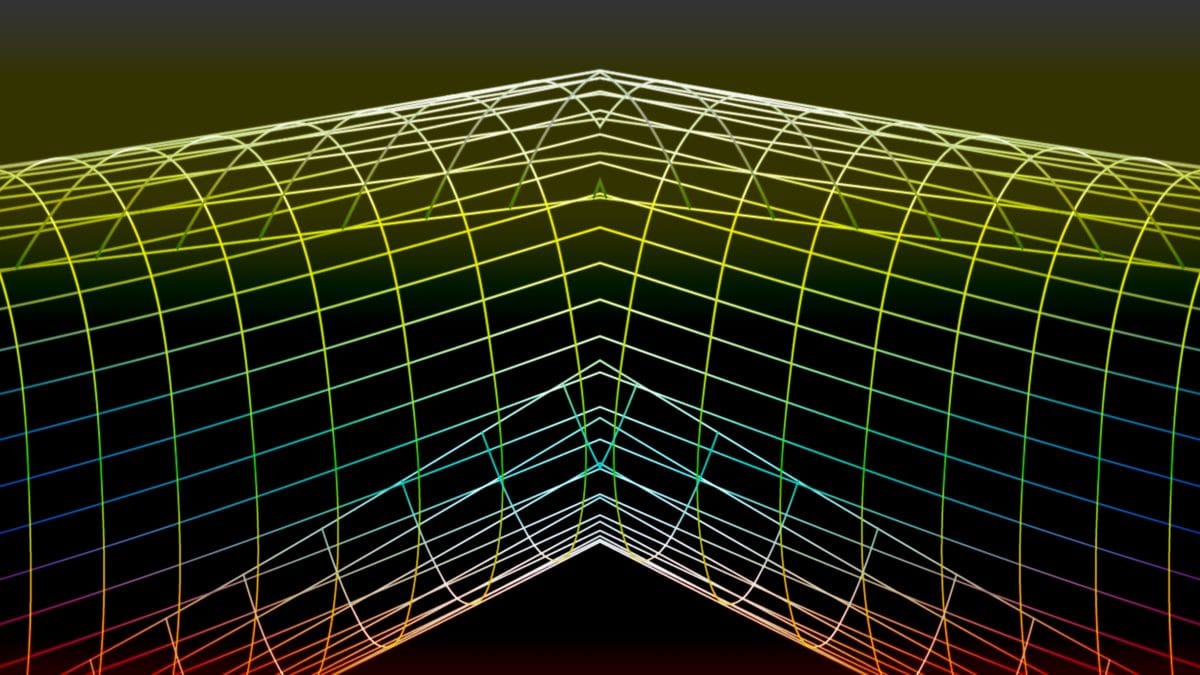