It’s nearly 10.30am and Hak Baker is still in bed. We’re chatting over Zoom and, with his duvet pulled up to his shoulder, he says with a laugh that no, he’s not hungover. Yesterday he was in the studio working on the highly anticipated follow-up to his 2019 album, Babylon – then, with mock sheepishness, he admits there may have been a few pints down the local afterwards. Before you make any assumptions, him taking our interview in bed isn’t unprofessional, Baker is a consummate professional – he just doesn’t do pretence. What you see is what you get. As he tells me later, “I’m an independent artist living in a council flat. It’s all about connecting with people over normal shit.”

Born to a Jamaican mother, Baker grew up on the Isle of Dogs in east London. This part of his identity is in everything he does. It’s laid bare on tracks like “PC Plod” and “Thirsty Thursday”, which evoke the hustle and bustle of London’s East End with equal parts nostalgia and cynicism: it’s there in the odd bit of cockney rhyming slang, and it’s there in his devotion to his local pubs. If you’re curious, Baker is a regular at Bethnal Green’s Marquis of Cornwallis and The Star by Hackney Downs, where he likes to sink pints with his mate and fellow musician Jamie T.

Despite labelling his impressive tolerance for alcohol as a “gift and a curse”, the 32-year-old is candid about his appreciation for boozers. He is concerned for their future amid the Tories’ crackdown on the capital’s nightlife, which has seen stringent alcohol licences enforce early closing times in a bid to appease finger-wagging, middle-class homeowners. Some places, like Dalston’s legendary Dolphin, are facing closure altogether. “They’re a massive escape, pubs, and people need them,” he says. “I grew up with old boys telling stories, which taught me about hierarchy and how to respect your elders. Now they’re eradicating those communities where will working-class people congregate? Where can people of different classes and races come together and find things in common? Middle-class people walk past me and think I’m weird – we can’t find no understanding no more.” 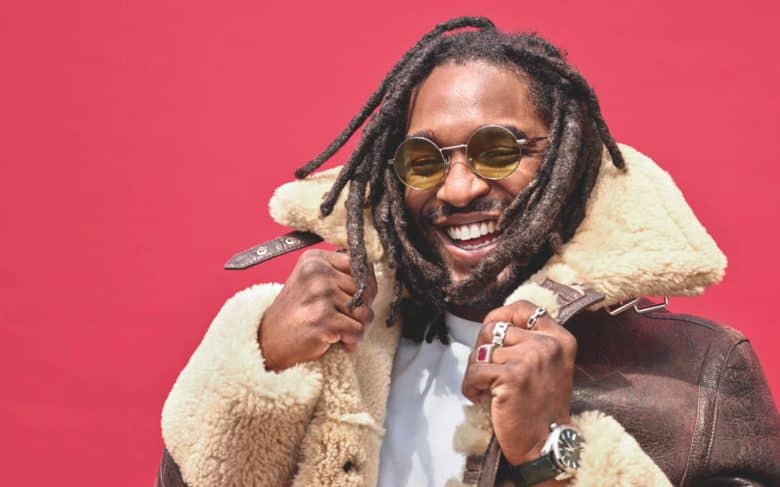 Hak wears jacket by AMI, top by SAMSØE SAMSØE, sunglasses by ARNETTE, watch by OMEGA and his own rings.

This is why, in May, he embarked on the Bricks & Mor-Tour, a series of pub gigs around the nation. Happy without a stage, Baker likes to be on the ground with his audience and eye to eye. At festivals he and his team don’t just move between the VIP areas and backstage – after a performance they jump straight into the crowd: “We go in and have a laugh for a day or two. It’s important to be on the same playing field as the listeners.”

Baker grew up spending a lot of time in pubs, but he was also surrounded by the rich music culture of the East End. At home and on the streets, he was exposed to an eclectic fusion of R&B, soul, rap and grime. After singing with the Southwark Cathedral Choir as a boy, he found his feet in the industry by joining the grime collective Bomb Squad aged 14. It didn’t last and what followed were some self- described “wayward” years, punctuated by time on the streets, with Baker eventually landing himself in prison at the age of 19 – he doesn’t delve into his past charges. It was while he was there, though, that he started taking the guitar seriously. “It was like my name just got picked in a hat to play it,” he says. “It was like coming back to my soul. I looked at it and I remember thinking that that thing was gonna change my life. I said it openly, out loud, and listen, it did change my life.”

Strapped for cash after prison, Baker was bought his first guitar by a stripper he was dating named Eliza, who he’s still in touch with. “I think she’s amazing,” he says. “She had a drug dealer’s frame of mind as a stripper – I used to deal so I know. It was mapped out with tenacity and beauty at the same time.” Armed with his instrument of choice, he secured a spot in the Skepta-headed Levi’s Music Project, which trains aspiring musicians. His breakout single, “7AM”, led to his acclaimed EP Misfits and thus a new star of the East End music scene was born, although Baker didn’t exactly fit the mould of a Black musician. Influenced by the likes of Fleetwood Mac and Kings of Leon, he fuses folk, grime and rap in poetic kitchen-sink vignettes that detail moments of quiet introspection amid the politics of being a Black man on the streets of east London. It was, in its difference, touted as radical. “People have always been afraid of Black people being something other than rappers or sportsmen,” Baker comments. “I’ve never been a sheep or a follower anyway, so if I was ever gonna make music, it was gonna be exactly what I wanted.” He was clearly in on the joke, later coining his genre of music G-folk or “guv’nor folk”. 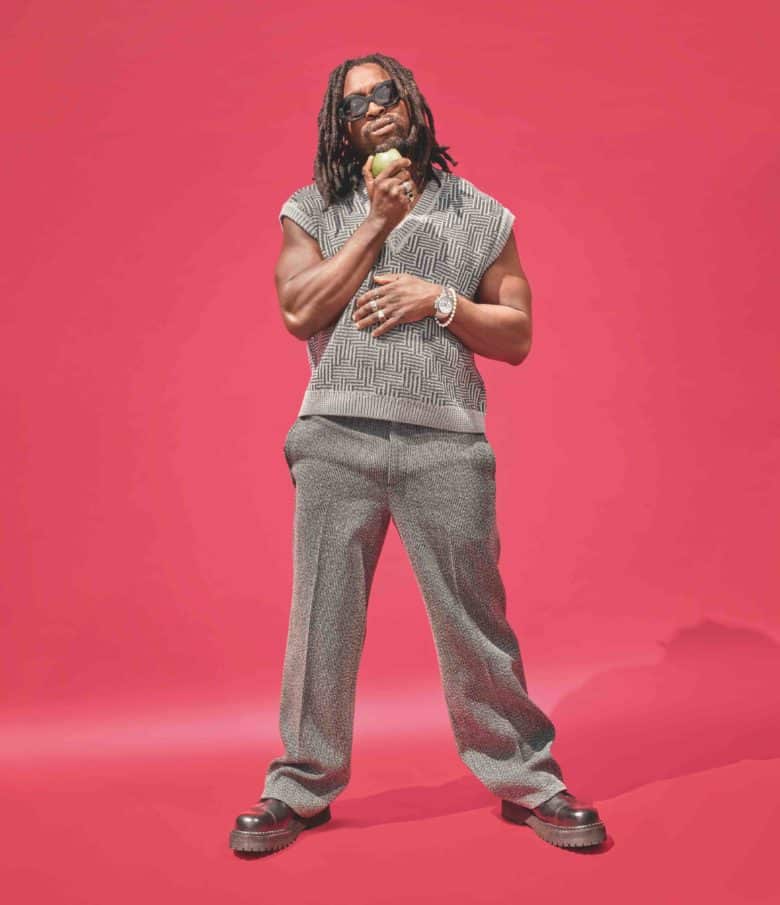 Hak wears top and trousers by EMPORIO ARMANI, shoes by UNDERGROUND, sunglasses by VERSACE, rings by PAWNSHOP and his own rings, bracelet and watch.

As his success grew, was he ever worried about certain narratives following him around, like his time in jail? Baker deliberates: “Yes and no… But I try to let my music do the talking. I’ve tried to step back and not go to the places where people are going to judge me. I’ve stopped going to industry events. I definitely got tarred with a negative brush, but I don’t really give a shit. I’m making songs for the people who can see themselves in me because I’m a normal man who makes mistakes.”

His latest single, “Bricks in the Wall”, continues the political theme. The deceptively up-tempo track evokes the endless loop of working- class life in a gentrified city, and it’s something that Baker has become increasingly disillusioned with. As he sings on the track “Babylon”, “There are no fairy tales in east London” – well, at least not any more. “Back in the day I said I’d never, ever leave east,” says the musician, who currently lives near Shoreditch. He speaks about his teenage years and spending time in youth hostels, with staff who cared and would go out of their way to ensure the kids weren’t going hungry. Now it’s all orientated around money, he despairs. “They don’t care about the people that built this community and they wonder why it’s so fucked. They wonder why kids are running around being crazy. We used to do it too, but not like this. We had bases we could go to, we had pubs, the youth club, where the elders could pull you out and chat to you. That’s eradicated now because they take the money and put it in their back pocket. Wherever you look rich people are destroying the Earth in every possible way.”

Now the artist wants to create his own home. He tells me several times of his dreams of forming a beautiful commune, away from alcohol licences and gentrifiers, where he and a thousand-odd people could just have “the best time in the world”, but that, of course, isn’t realistic. What is, though, is going back to his Jamaican roots, more specifically Jamaica itself. It’s a bombshell that Baker drops nonchalantly – but it’s been in the works for a while and his mother is already there, “sorting out the land”. It’s about wanting some “slow life”, he explains, plus, as we keep coming back to, east London just isn’t the same any more. “The old boys are dying, my best friend died, and it breaks your heart. You walk down Brick Lane and think, ‘What is this tourist show?’” But before you panic, Baker is only planning on spending half the year there and the new record is still on its way. He can’t tell me much about the album, it’s early days, but it’s on a subject he knows well: juxtapositions. “It’s a forecast of the world and being happy in dark places,” he says. “Musically it’s another step up, and again, eradicating and staying out of those boxes and just expressing myself more fearlessly than I’ve ever done before.” 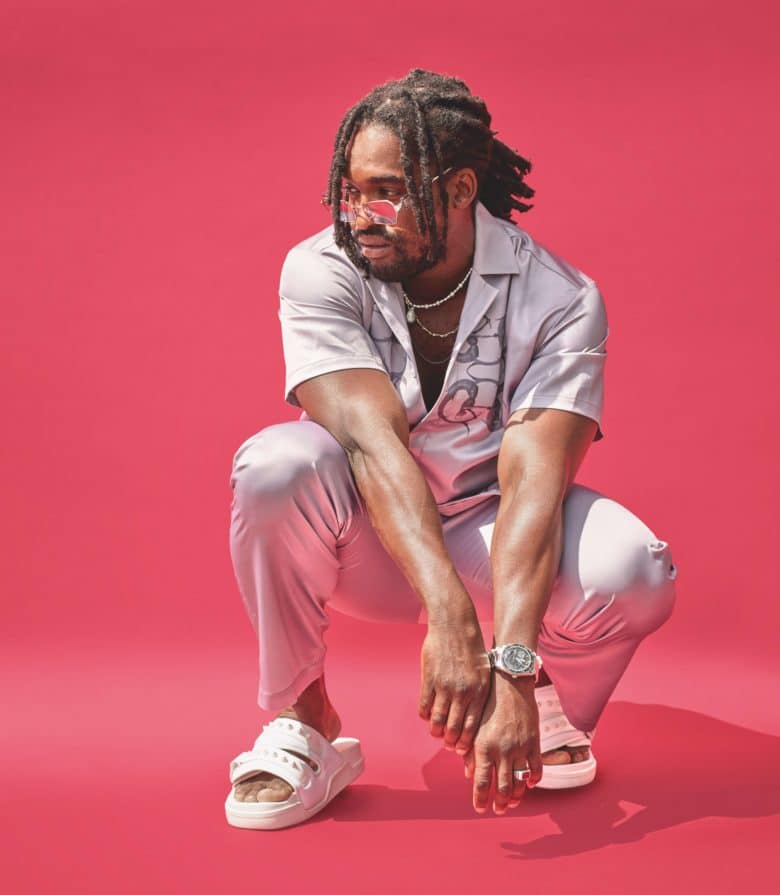 Hak wears shirt and trousers by RUIRUI DENG, slides by CHRISTIAN LOUBOUTIN, glasses by MIU MIU, pearl necklace by A SINNER IN PEARLS, watch by OMEGA and his own chains and ring.

Days later, after sending a thoughtful thank you for our chat, Baker turns up at the studio at Rankin HQ bang on time. He’s charming and makes every person on set laugh, before sinking several bottles of Stella Artois to psych himself up for the live performance for our socials. Hak Baker is a people person, he loves to entertain and make people feel seen. It’s why he cherishes pubs, too. It’s not so much about the drinking as it is a place for people of all backgrounds to come together and forget their differences, even just for one night. As he told me a week previously, with a twinkle in his eye: “It’s all about this, you see? When I sing on a track that I snogged a bird that I shouldn’t have and got in trouble – that makes the guy in the corner laugh. Another person elbows their mate in the ribs, they roll their eyes, and they feel good because they don’t feel lonely no more about something they did. Look, that’s my job done.” 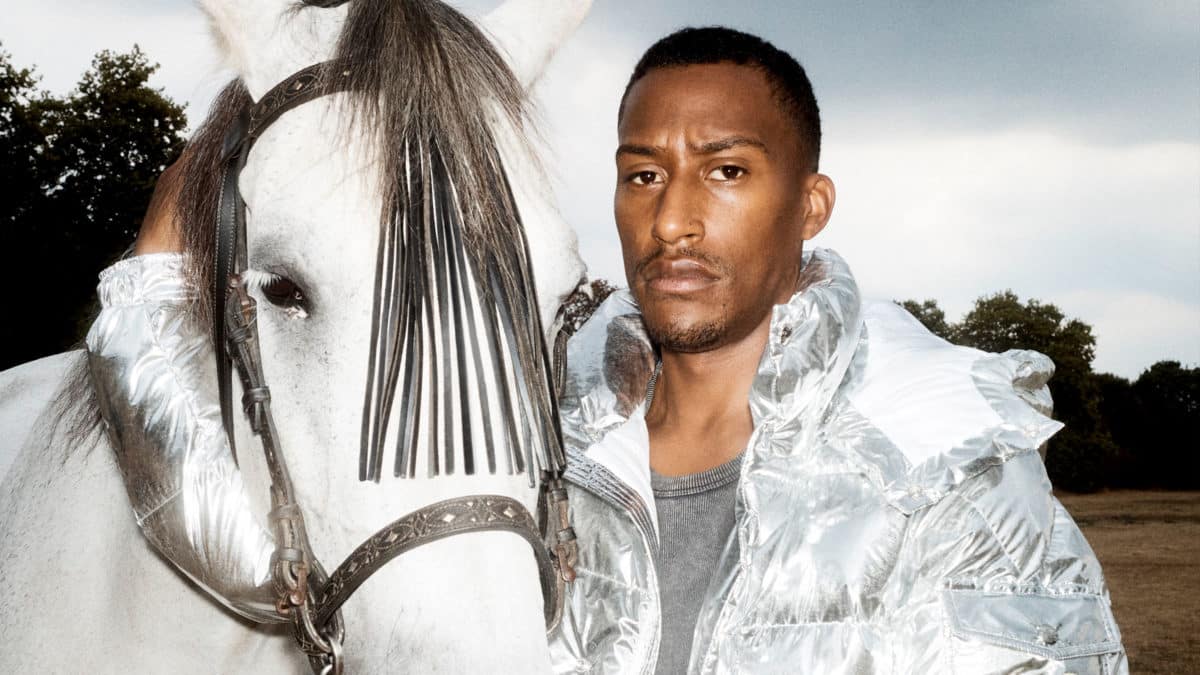