Football shirts are now firmly established as part of many a fashion lover’s wardrobe – a statement that would have been met with much raising of eyebrows as little as a decade ago. The culture itself was born on the terraces in the 1980s, when football fans went over to Europe and brought the fashion back from brands like Sergio Tacchini, Kappa, Stone Island and CP Company. The football shirt itself was more for practical application, literally for playing football, and for collectors like me to obsess over. There has always been an affinity between it and the music community, with the likes of Motown legends The Three Degrees wearing West Brom shirts when they played in the town in the 1970s to Bob Marley famously sporting a Santos shirt for a kickabout. In the 1990s the Gallagher brothers were often photographed wearing the baby blue of Man City, increasing the football shirt’s migration onto the street. And the pop culture bible The Face even had a football-shirt-adorned Kate Moss on its cover for Italia ’90 – the jersey’s first steps into the high fashion world – but the trend didn’t kick off (if you’ll excuse the pun) and the football shirt as a style piece went into a cultural hiding of sorts … until now.

So how did the jersey find its way permanently into the fashion world? Like all change, it started with subcultures. In about 2016 skateparks up and down the country started embracing the football shirt – for reasons aligned with style rather than allegiances to a team. These skateboarders were a minor feature in my first book on football shirt obsession, The Football Shirts Book: The Connoisseur’s Guide, which looked at the garment from a cultural perspective but also included chapters on its connections with music, politics, design and fashion – it was a real struggle to fill those sections.

If I were to write the same book today, those sections would be bursting at the seams. The world of football shirts, and quite frankly, football off the pitch has changed beyond recognition. The beautiful game and fashion are now inextricably linked. Don’t get me wrong – being a former 1980s football casual, I’m well aware that on the terraces there were fans who took their personal style very seriously, but in 2016 it was the denizens of the street, and indeed the connoisseurs of streetwear, who led the way. In part, this was steered by the “new world” of football territories – the US, Australia and South Korea – which maybe didn’t have so many of the old world’s tribal hang-ups about the whole scene. Football garms became fashion garms – to be interpreted as one saw fit.

Shortly afterwards came the own-brand football streetwear labels such as Nowhere FC, Nivelcrack and my very own Lover’s FC. And it was only a matter of time before the idea of football shirts as fashion items was picked up by more mainstream designers, the high street and, of course, high fashion: think Balenciaga’s AW20 £700 jerseys, Gosha Rubchinskiy SS18’s oversized shirts and Koché’s AW19 patchwork dresses. In fact, these brands pushed the movement so far that football clubs started switching on to the idea of conceptualising designs that might appeal on a more commercial, fashion basis. Venezia FC are a prime success story: Bureau Borsche and Kappa recently redesigned the club’s logo and shirt, embracing their 115-year history. The rebrand has had them being hailed the coolest club in the world, showing how even an obscure, down-on-their-luck football club can start making global sales with a great design, aspirations, high-level photoshoots and treating the club jersey as more than an afterthought. This leads us to the sweet spot where the clubs, manufacturers and talent all come together – Paris Saint Germain with Nike and Jordan, for example, or AC Milan with Puma and Off-White. It’s a sign of how far we’ve come from the days when nothing more than the colours of the home and away shirts mattered. 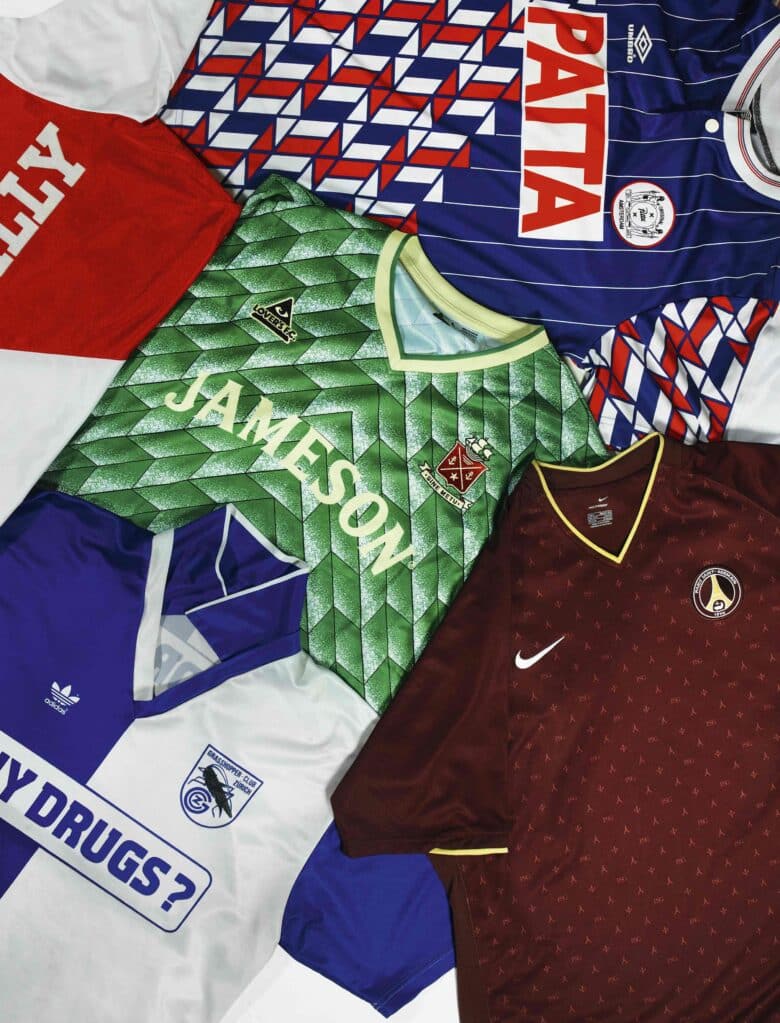 And this is just the start. How do I know? I’ve been here before. In 2003, I authored Sneakers, one of the first books on trainers and the culture around them. At the time people would laugh and ask why I was writing about something so niche. Football shirts are on a similar trajectory. Some day in the near future, every club will have official off-the-pitch and on-the-pitch athleisure ranges – even official team shots will be styled.

Football clubs are becoming more than objects of traditional fandom, they are basically the new streetwear brands. It’s something the Americans have known since the 1950s. Stand on any UK high street and you’re only ever a few feet away from an NY cap. Football is playing catch-up: look at the rebranding of Juventus’s club badge in 2017, when their more traditional emblem was swapped for a refined J, in many ways echoing the ubiquitous simplification of brand logos, including those of Celine, Saint Laurent and Burberry.

Americans are somewhat behind the push: Venezia and Roma are US-owned, as is nearly half the Premiership. What I crudely term the “basketballisation” of football is in full swing. And what the hyped-up icon wears off the pitch or onto the pitch for warm-up is as important as the result.

Now, the planet’s coolest brands, such as Palace, Daily Paper, Off-White, Aries X New Balance and Patta, have football shirts as part of their latest drops, some of them catching the World Cup momentum, others having long championed or even spearheaded the trend. And one thing is for sure: even when the last player has left Qatar, the football shirt in its fashion guise will still be a winner.