Moët & Chandon are continuing to spread cheer this holiday season as their festive celebrations continue to take place around the globe. On Monday evening, the French fine winery pulled of the most spectacular bash of the season, when A-listers and the media descended on New York to celebrate the unveiling of Es Devlin’s new sculpture, ‘Your Voices’, which was gifted to the city of New York by Moët & Chandon.

The evening — which was attended by the likes of sporting legend Roger Federer, as well as renowned actors, Jessica Chastain and Daniel Kaluuya — took place in New York’s Lincoln Center, where guests, including HUNGER, were further entertained by a surprise appearance by the Christmas icon herself, Mariah Carey.

The Lincoln Center’s Josie Robertson Plaza is the current home of British artist Devlin’s illuminated, kinetic sculpture, which was unveiled on the night. ‘Your Voices’ celebrates New York as the most linguistically diverse location on earth, where more than 700 languages are currently spoken: from Algerian Arabic, Alsation, Azeri and Ashanti to Zapotec, Zarma and Zulu. With over 700 glowing cords representing the many languages spoken in New York, Your Voices shines bright even in and amongst the city’s infamous hustle and bustle. 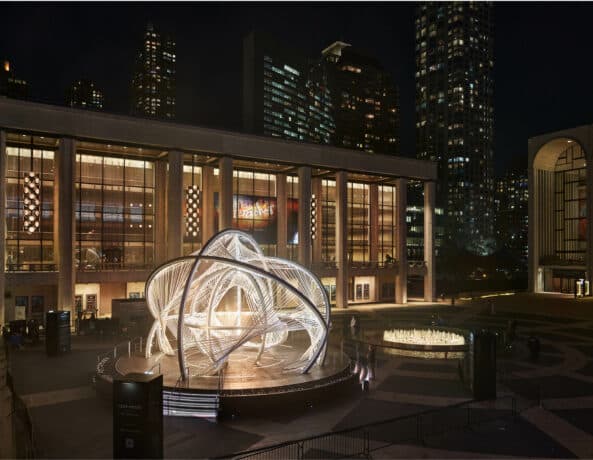 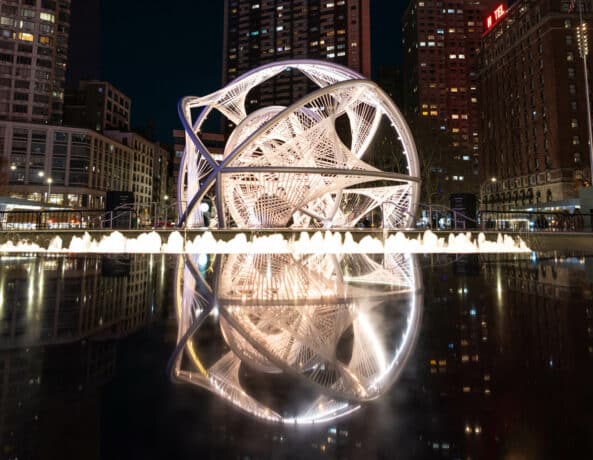 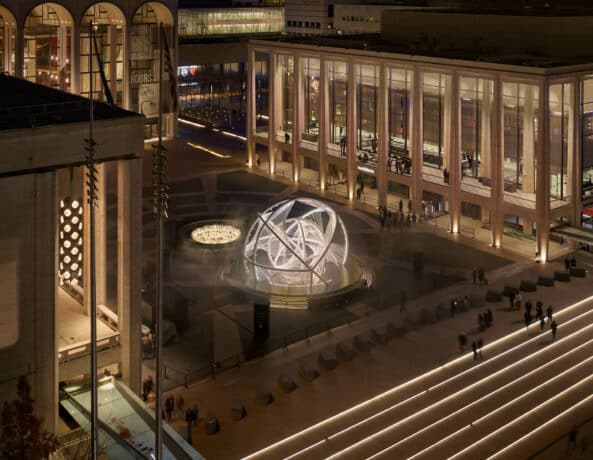 Devlin was commissioned by the winery in 2020 to make a public sculpture for their end-of-year celebrations in New York. Ever since she first visited the city in her early twenties, Devlin says she has been “moved by the range and breadth of diverse human cultures overlaid on
this small patch of the planet.”

“As the sculpture revolves, it acts as a lens between the viewer and their surroundings,” continues Devlin. “The viewer’s perspective is spliced and framed by the shifting strands of the sculpture as it turns, evoking the way our perspectives are enriched and shaped by experiencing the linguistic structures and identities of others.” Devlin conceptualised the sculpture in association with the Endangered Language Alliance, and Moët & Chandon will be making a donation to the alliance, in an effort to preserve global languages spoken in the city.

For those already in the big apple, or hoping to make a trip this Christmas, ‘Your Voices’ is available to view from now until December 18. And to add further festive gloss to the event, there will also be performances from New York-based choral groups on Friday, Saturday and Sunday evenings at 6pm from within the sculpture. 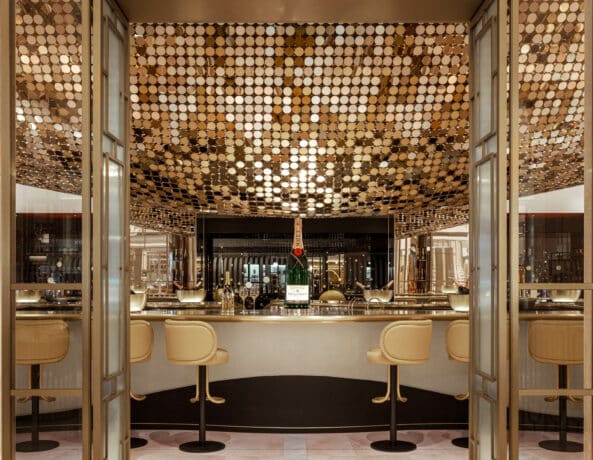 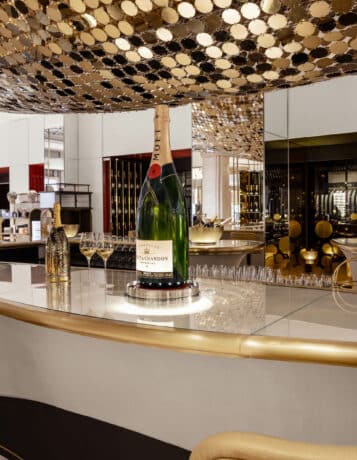 Now, for those who can’t make the trip over to New York, not to worry, because Moët & Chandon are bringing their effervescent experiences to London, too. Tucked away in the city’s iconic luxury retailer, Harrods, is where you’ll find the Moët & Chandon Champagne Bar — the brand’s largest standalone bar in Europe. The luxurious, cosy bar offers a wide selection of rarities, vintage and signature wines and is sure to birth some of your most heartwarming festive memories this year. Also launched this season is the bookable Champagne Tower experience under the bar’s shimmering chandelier, which is inspired by the effervescence of the famed champagne. The tower can accommodate two to six people and features a magnum of Moët & Chandon Impérial Brut presented in a specially designed case, which then cascades into a mini pyramid of glasses. 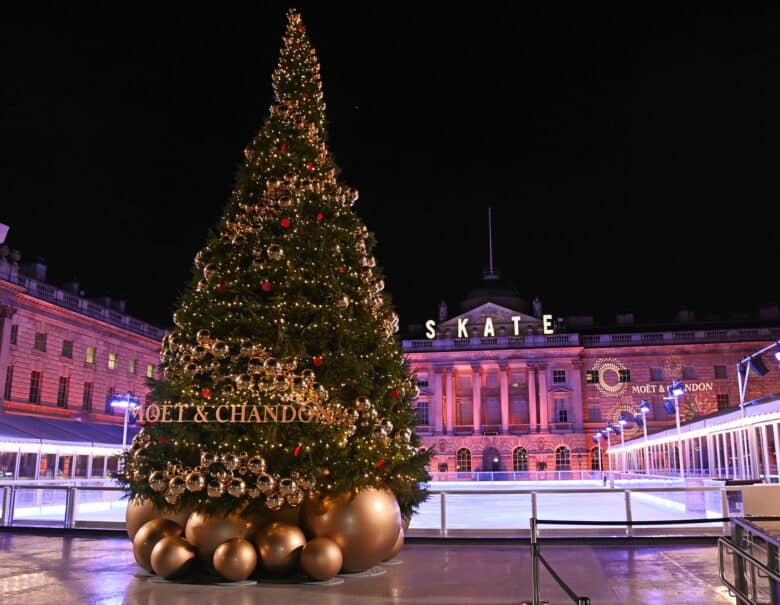 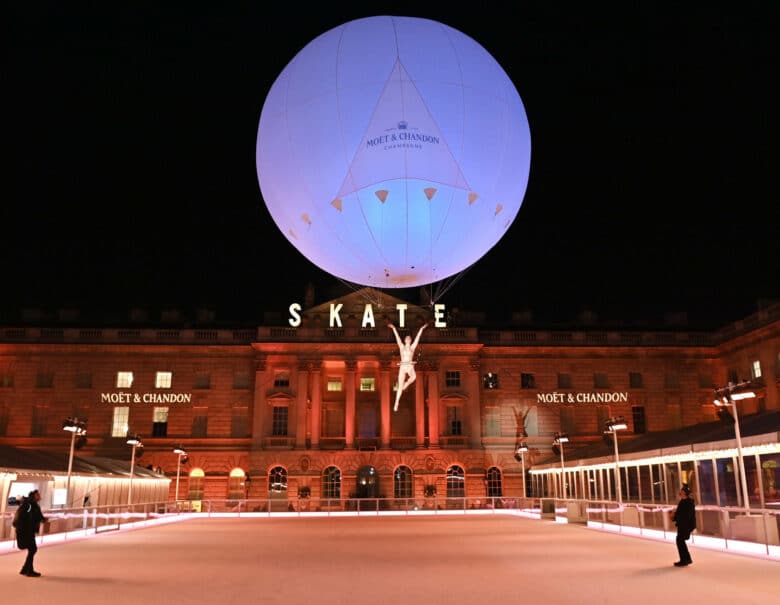 If you’re on the more adventurous side, Moët & Chandon have you covered there too. For the second year in a row, the iconic champagne house is the official partner for Skate at Somerset House. And as we all know, there’s no better celebration of the holidays than embarrassing yourself in front of all your friends as you helplessly cling to the side of an ice rink. Luckily, you’ll more than likely forget about the whole ordeal thanks to the Skate Lounge, where you’ll find a welcome offering of Moët & Chandon Impérial and Fireside Royales cocktails. Skate at Somerset House with Moët & Chandon is available to book until January 15th, here.