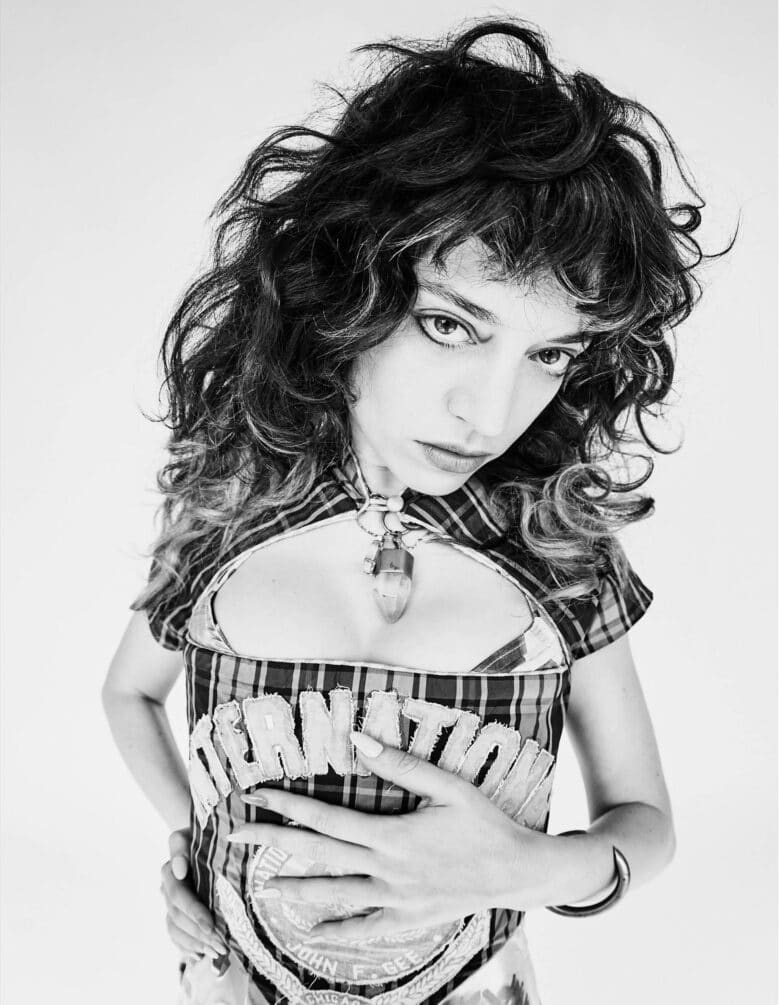 The Israeli designer Itiya Stawski finds inspiration for her two-year-old eponymous label in the most unconventional of places: “I’m really inspired by two main things – my parents’ divorce when I was a kid, which made me obsessed with collecting things, and the army [Israeli Defence Forces] that I was forced into for three years.” Stawski’s designs span efflorescent and cinched dresses, corset shirts and silhouettes that implore you to show a little skin. Now based in London, the 27-year-old fine art graduate is keeping sustainability and playfulness at the heart of her creations: “The clothes are mixing child aesthetics with adult [style] – it’s like a kid’s perspective on adults.” 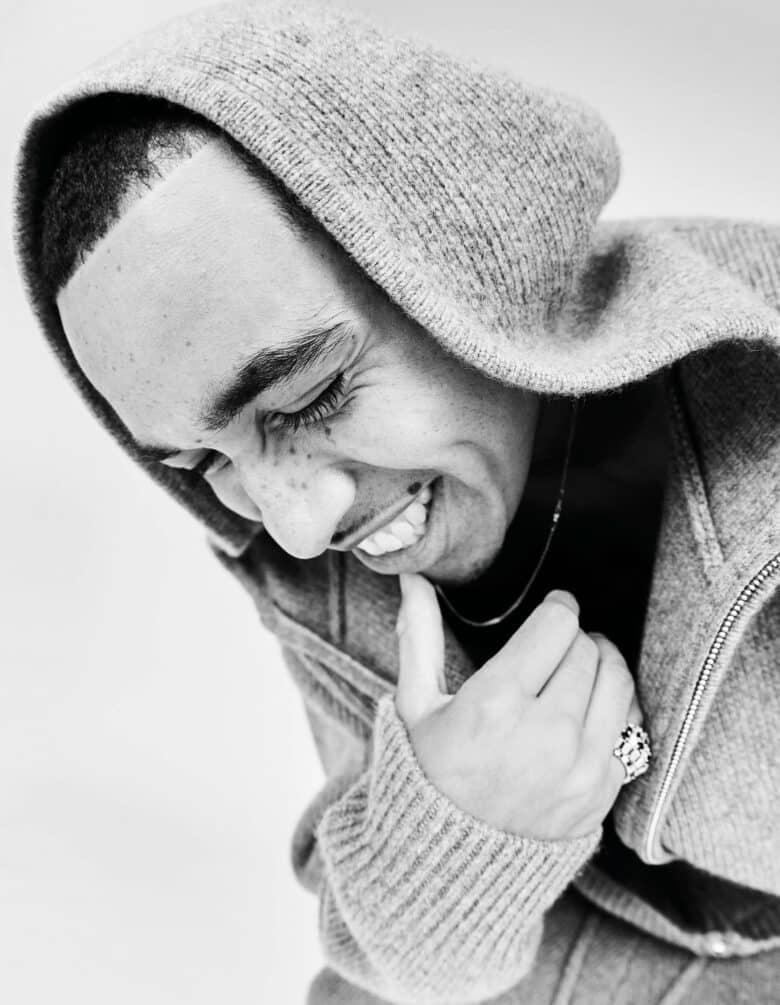 “I remember when I first started acting, I was 18, I said to my mum, ‘Give me five years and I’ll make it happen.’” It didn’t take long for Ezra Elliott, now 24, to start landing roles in the likes of the Sky One series Bulletproof, this year’s The Batman (with Robert Pattinson) and Prime Video’s new TV drama about UK rap/drill culture, Jungle. In this, his proper breakout performance, Elliott appears alongside the artists M24, J Fado and IAMDDB. “What I want people to know is that Jungle is an experience of London that no one’s seen before.” And there were certain aspects of the show that made it easier for Elliott to slip into the skin of his character, Gogo, like his growing up in Peckham, living and breathing London life. “When I first got the audition, I read it and thought, this is so funny, this would be me if I chose to take a different route in life.” 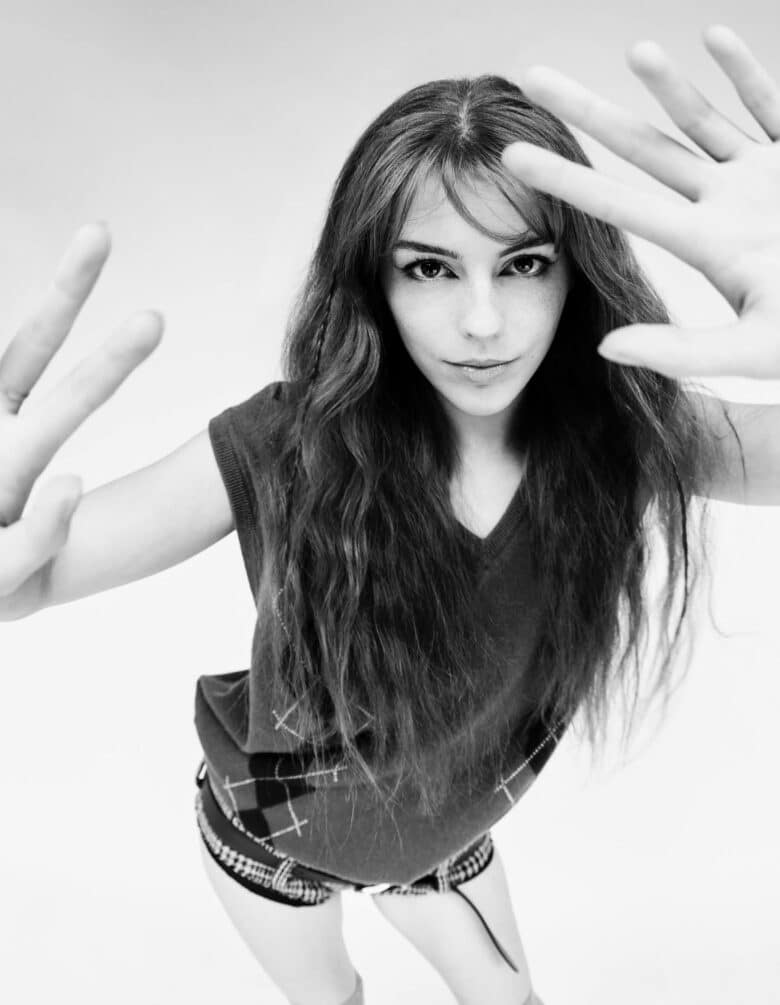 There are few 23-year-old writers with the same accolades to their name as Amelia Gething. Kicking off her career when she was a kid, she would create videos and sketches in her free time. Her rise from amateur storyteller to BBC writer is one to behold. “I wasn’t expecting anything, I didn’t have any contacts in the industry,” she says. Initially she found popularity online, with the BBC comedy The Amelia Gething Complex, where she cemented herself as a comedic force to be reckoned with. This year Gething also appeared in the hit film Emily, about the life of the English writer Emily Brontë. So if her success proves anything, it’s the need to follow your dreams: “I dropped out of sixth form not long before I finished to pursue online content full time. My parents are actually the ones who advised me to drop out.” And aren’t we glad they did? 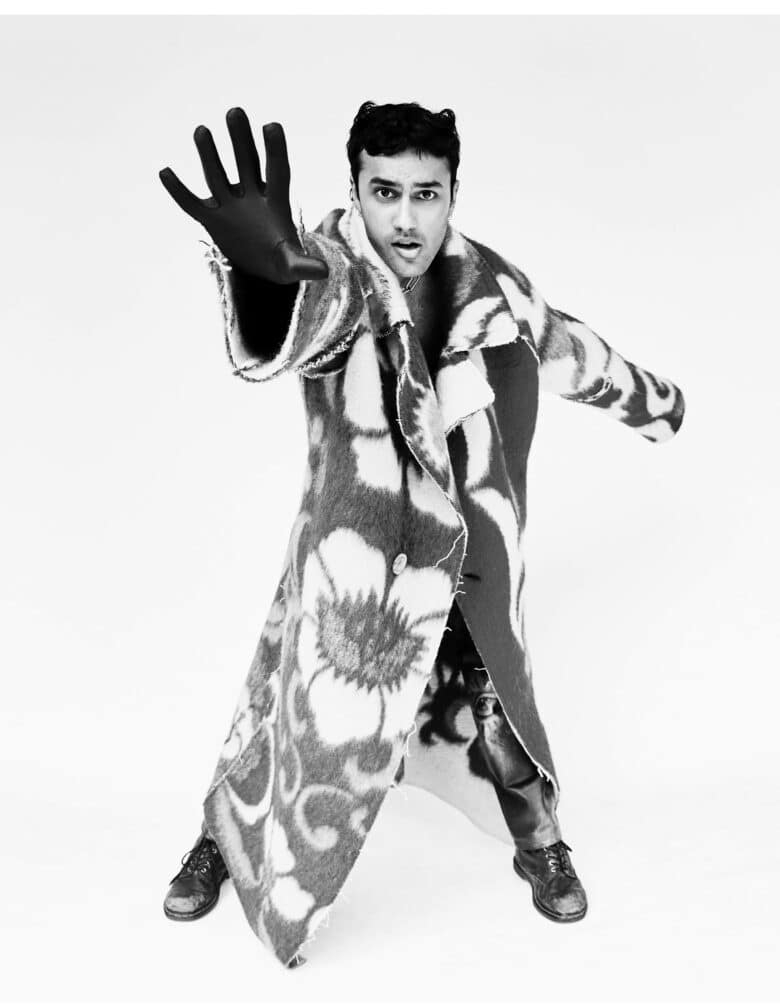 For 21-year-old Ray Laurél, the pandemic signalled a turning point in their creative career. Until then, Laurél’s life had been all about performing. There were times when the artist wanted to be a ballet dancer and then an actor, but when 2020 hit, that’s when their attention turned to music: “I got my guitar out and got to work.” And tired of being branded an R&B artist because of how they look, Laurél has a lot to say. “[The music is] slightly to do with how I’ve been told to be my whole life, whether it be [about] queerness, culturally or what I’m allowed to do being Indian. I’ve never had a lot of people to look up to, or who look like me, and that really pissed me off. So I’m just reclaiming that.” Tracks such as “Hunter Schafer” sit like jewels on the blossoming discography of this young, Dalston-based musician tracking their identity through music. 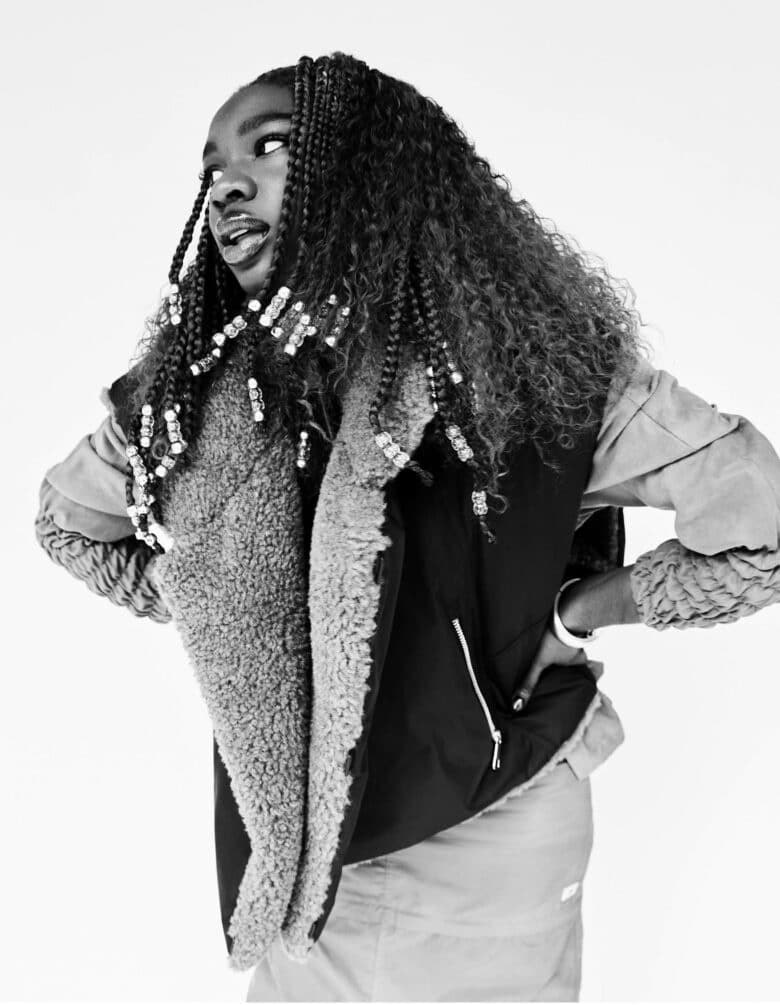 Is Vivian Oparah an actor who makes music or a musician who acts? The answer: “I’m an artist, a creative.” And the 25-year-old Londoner has already had a pretty good run in both worlds. Oparah has appeared in the hit Michaela Coel show I May Destroy You and the Doctor Who spin-off Class, and has two new projects out soon: Rye Lane and Then You Run. “When I got my first acting job, I didn’t realise the scale of it and I asked if I could keep my old job at Carphone Warehouse,” she laughs. You’d think a busy schedule like that wouldn’t leave much time for other artistic endeavours, but Oparah has been spinning her “scary, electronic, experimental” music at numerous shows and festivals this year. The word “multihyphenate” is thrown around a lot these days, but Vivian Oparah is worthy of the description. 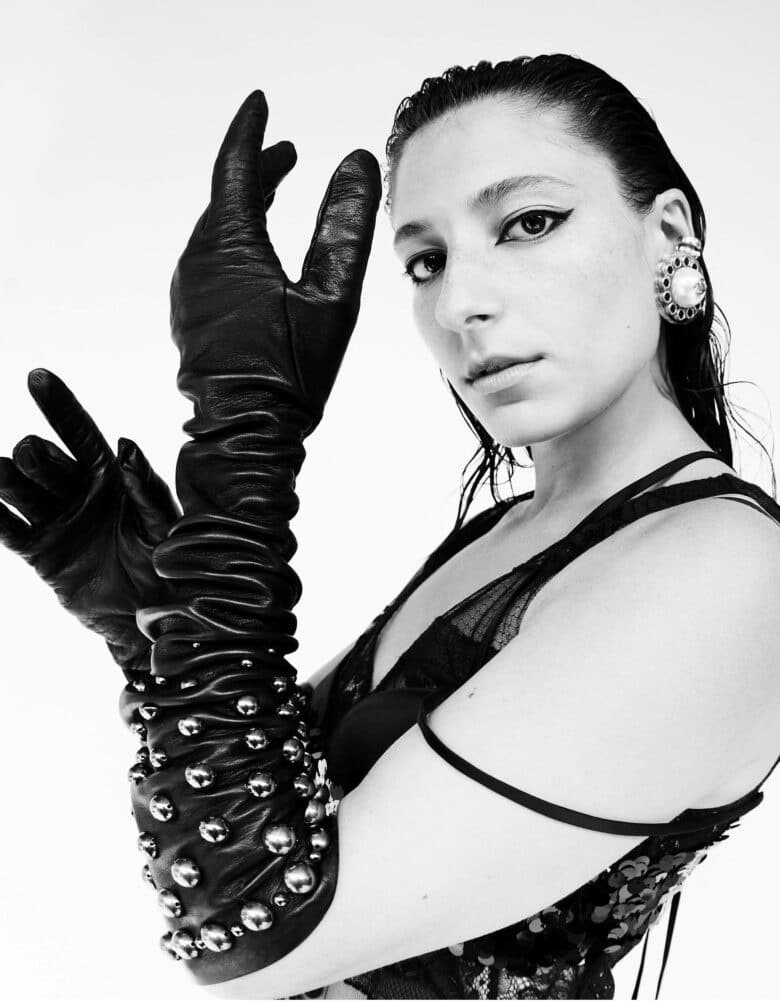 Ever since she was five Elisha Applebaum has dreamt of becoming an actor. As the stars started to align for the Essex-raised 27-year-old, she landed on our screens in the Netflix teen drama Fate: The Winx Saga, portraying the introverted Musa. “The character is pretty much me when I was in school – headphones in, not listening to anybody, just in my own world,” she admits. As a self-confessed film geek, Applebaum is setting her sights on big roles behind the camera as well, writing and directing – helping to bring stories to life in a different way. And it’s her work mantra that keeps her on the right track: “I think if you doubt yourself, you won’t do your best work. You’re in this position because you didn’t doubt yourself before and you wouldn’t have got to this place if you had. So I tell myself I can do this one more time.” 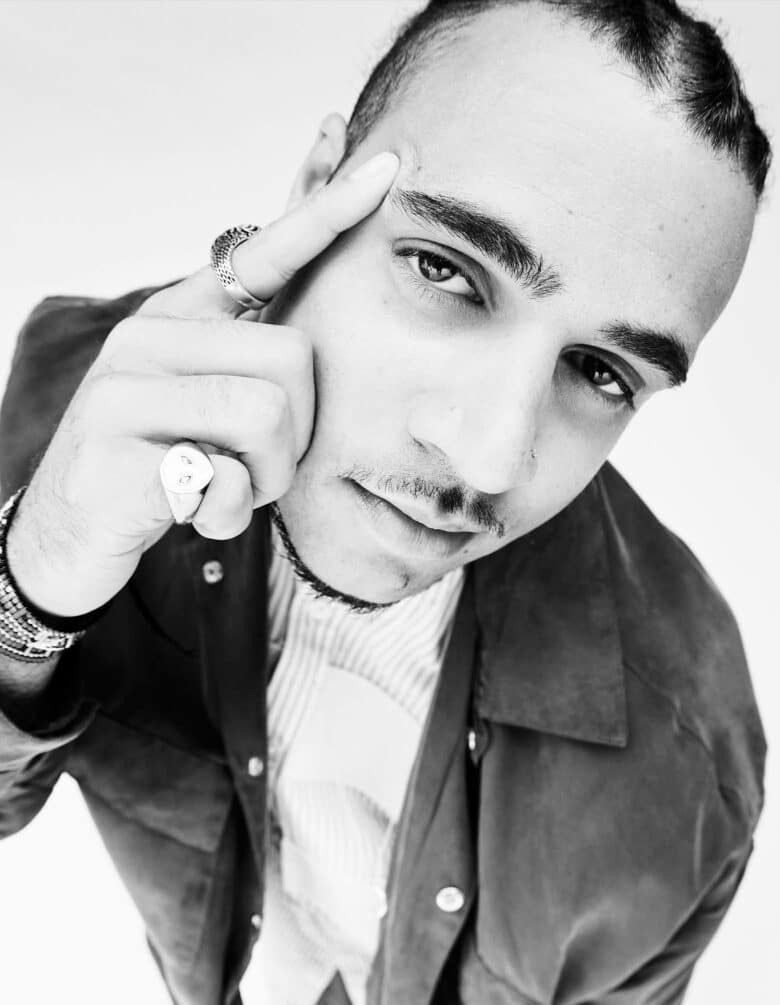 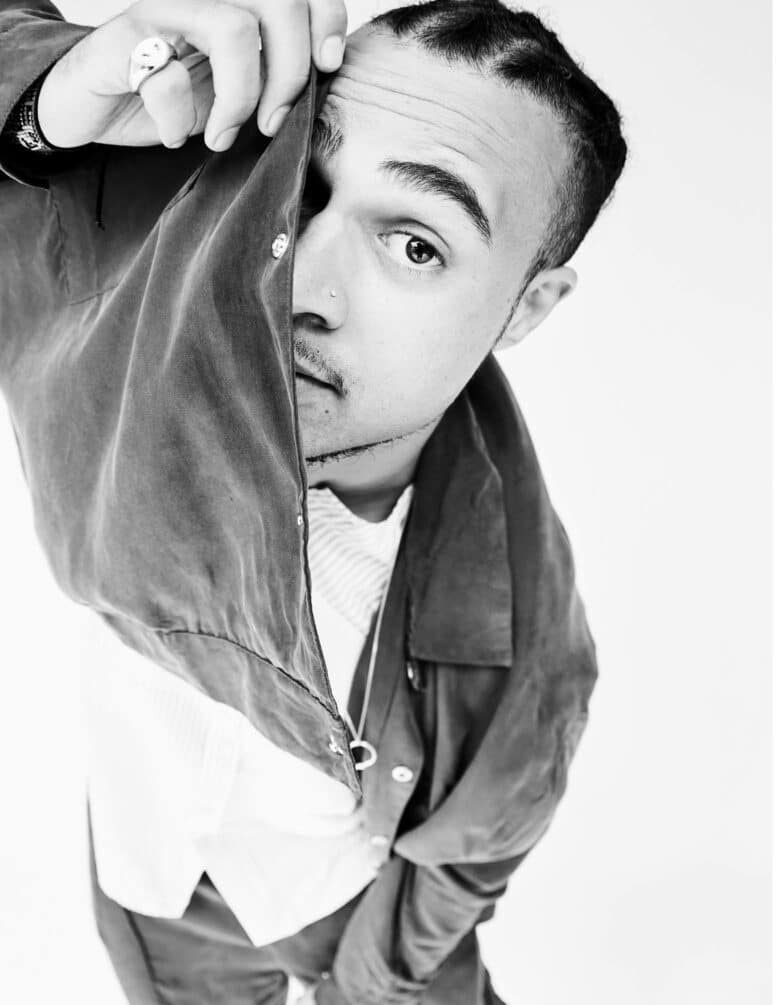 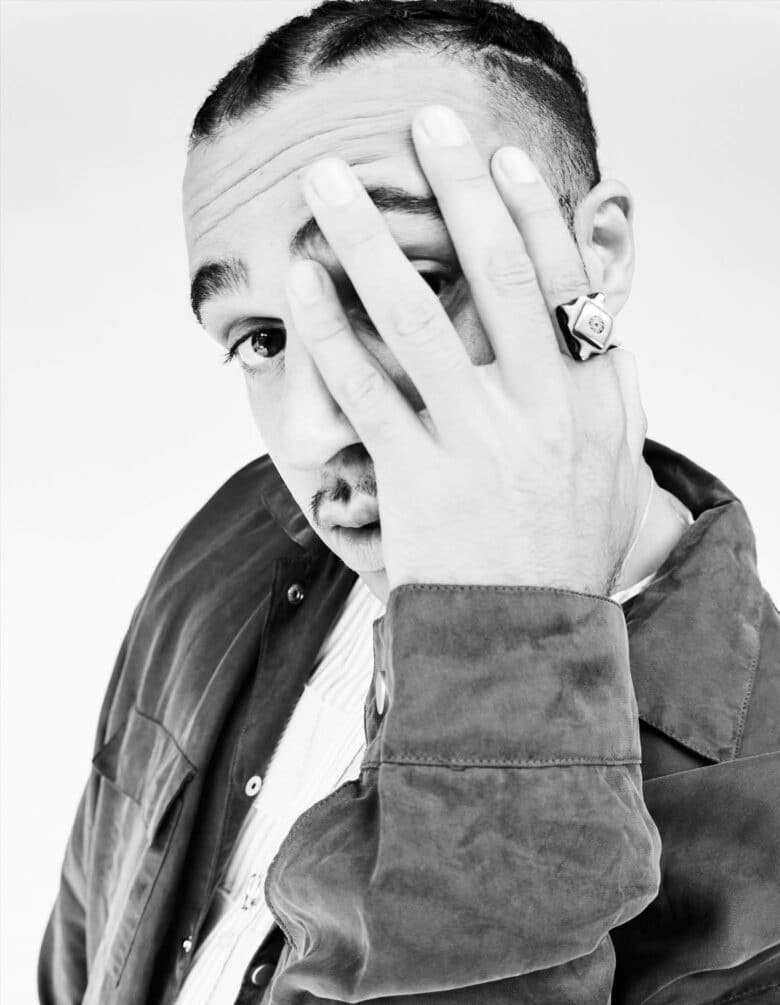 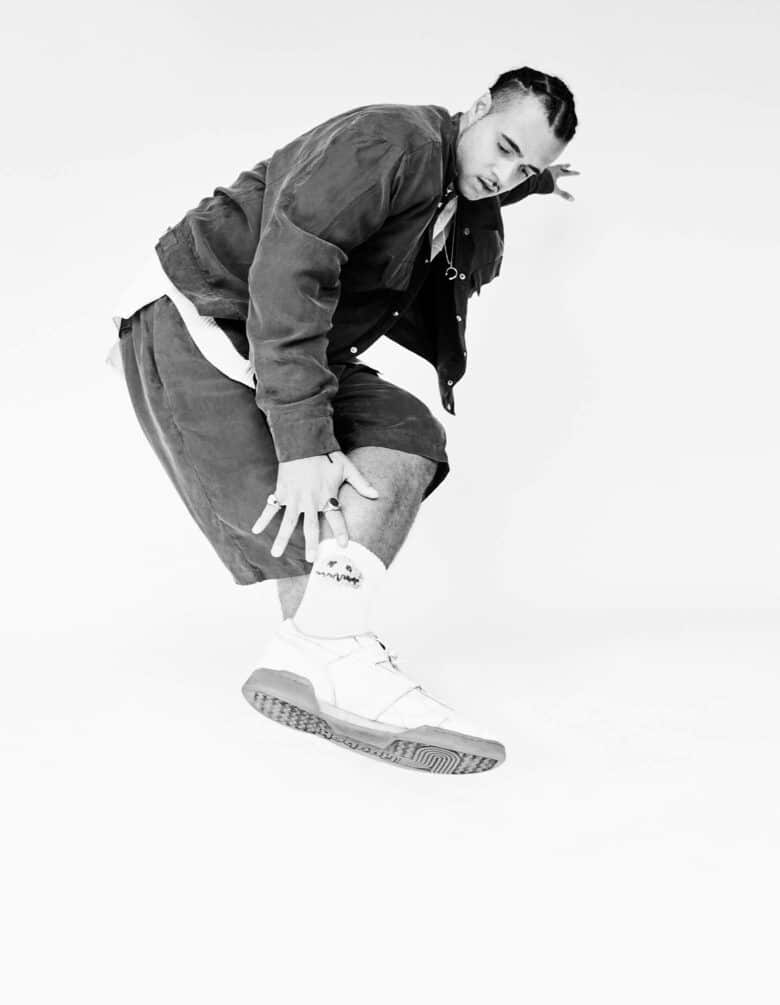 North Londoner Louis VI delivers climate activism and discourse around race and culture packaged up in a unique take of jazz-infused hip-hop – though he started making music to escape his troubled home life. “Music was a real distraction from a lot of the madness going on in my life,” he says. “I had grown up around domestic violence.” One of the things that is as important to him as music is nature, and his next album focuses on that – parts of it were even recorded in the Amazon rainforest. Though it’s still early on in his career, Louis has already had the pleasure of working with Mick Jenkins and Jelani Blackman, and was also present in the studio while Frank Ocean was making his 2016 album Blonde. He has played a string of sold-out headline shows as well as opening for the Chicago born and raised rapper Saba in London. 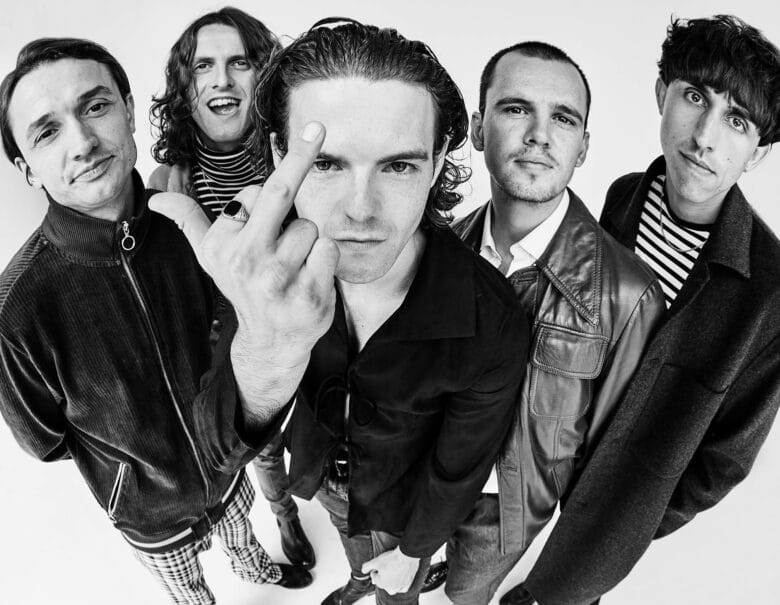 The Blinders – Thomas Haywood, Charlie McGough, Thomas Castrey, Eoghan Clifford and Johnny James – hit a fork in the road when their original drummer decided to leave a few years back. “We were left in limbo, thinking, ‘Fuck, where do we go from here?’” says lead singer Haywood, 25. Nevertheless, the Doncaster band trudged on and searched around Manchester, where they were at university, plucking the best musicians they could find to form the band we know today. Now the Blinders have racked up millions of streams and performed at major UK music festivals, including Reading and Leeds. Music is so much more than just a career choice for Haywood, who admits he would “probably be dead” had he not had the therapeutic outlet his songs offer him. Now the band’s success grows by the day, with them signing to a major record label as we go to print. 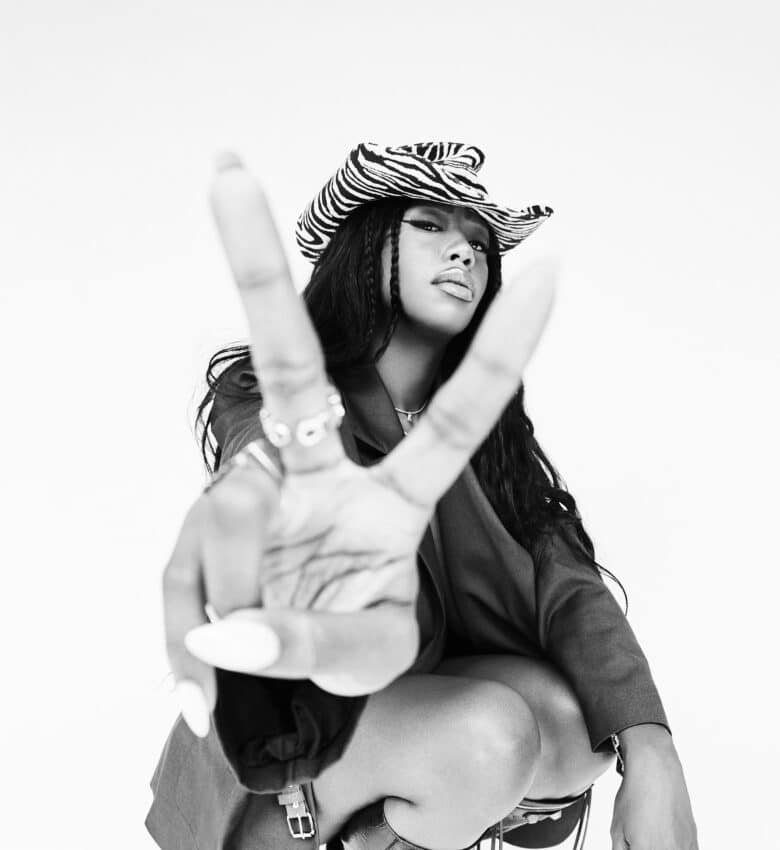 Singer-songwriter, producer, record label boss and Grammy winner Kamille is ready to take her vast list of accolades to the next level. The 33-year-old began her career penning hits for the likes of Jessie J and Little Mix and even knocked herself off number 1 in the UK charts in successive weeks, which she counts as one of her biggest successes. “I can’t believe I managed to do that, especially as a Black female in the UK. It’s kind of unheard of.” She has also caught the attention of none other than Beyoncé, who listed her as one of her favourite UK artists. Now, Kamille is shifting her focus towards a solo career, which is where you’ll find her at her unapologetic best. “I think the thing that threads my music together is my honest lyrics, vulnerability, openness and just my empathy for women in particular.” 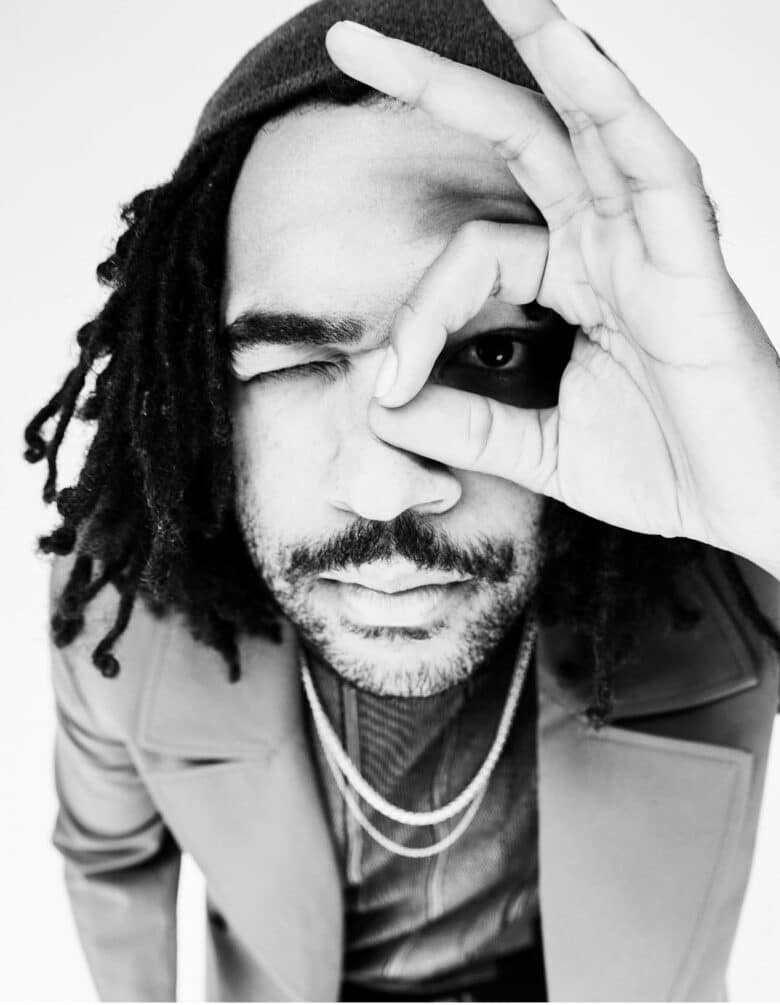 “I learnt to be a musician by being in bands and having that semi-chaotic energy bouncing off each other all the time,” says 25-year-old Fitzroy Holt. The Wolverhampton-born musician started his career as a solo artist, before building Fitzroy Holt into a band with no fewer than ten members. “Pulsing, psychedelic rock with hints of soul and blues,” is how Holt describes his current sound, although he wants to push the boat out in the future and even give disco a go. When quizzed on what’s most fulfilling about making music, he simply replies: “When you can connect with people you’ve never met before on a deeply personal level.” Holt considers himself a bit of a fashionista too, describing his style as “[if] Tom Waits and Bob Marley had a baby and it was styled by Vivienne Westwood”. 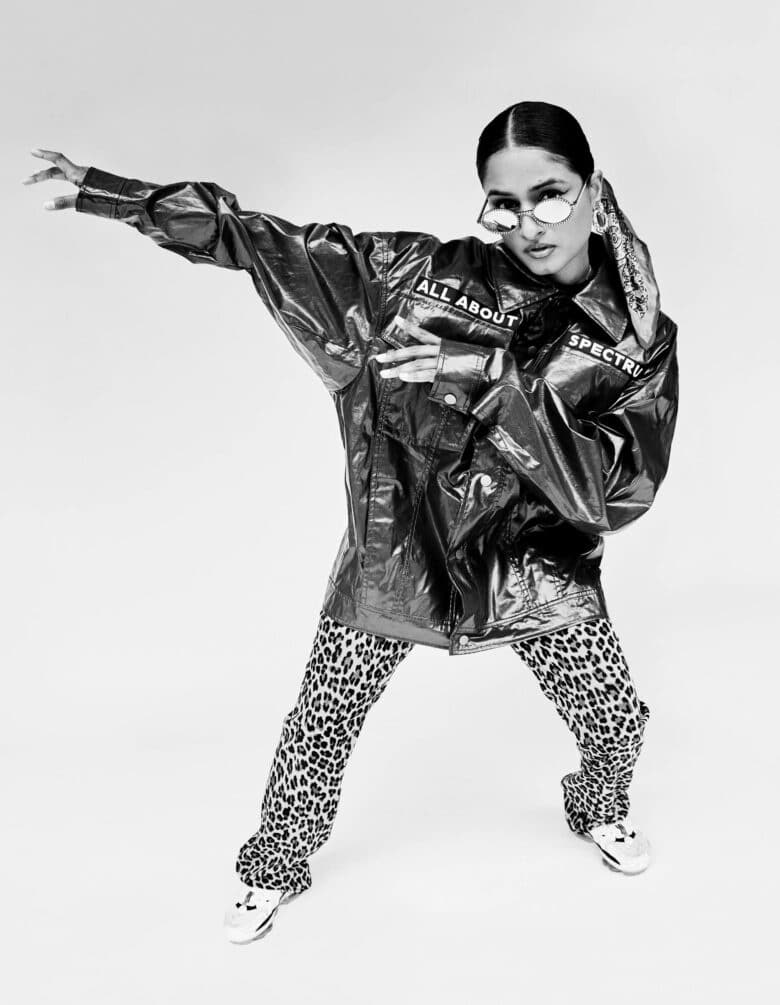 When Priya Ragu decided to concentrate on music, her parents weren’t exactly over the moon, but the success she has enjoyed since her change of path from being a technical purchaser of aircraft parts to full-time musician has seen her Tamil-Swiss family get on board. In fact Ragu, whose R&B style combines hip-hop with her South Asian heritage, has her brother, Japhna Gold, on hand to help create her sound. “That’s the legacy I want to leave behind, a family project,” says the 36-year-old, who is spending her time on the road between tour dates writing new material for her millions of listeners. And as the whirlwind of popularity continues, Ragu admits that “everything moved so quickly, now we have to come up with the new project as quickly as possible to keep up that momentum”. 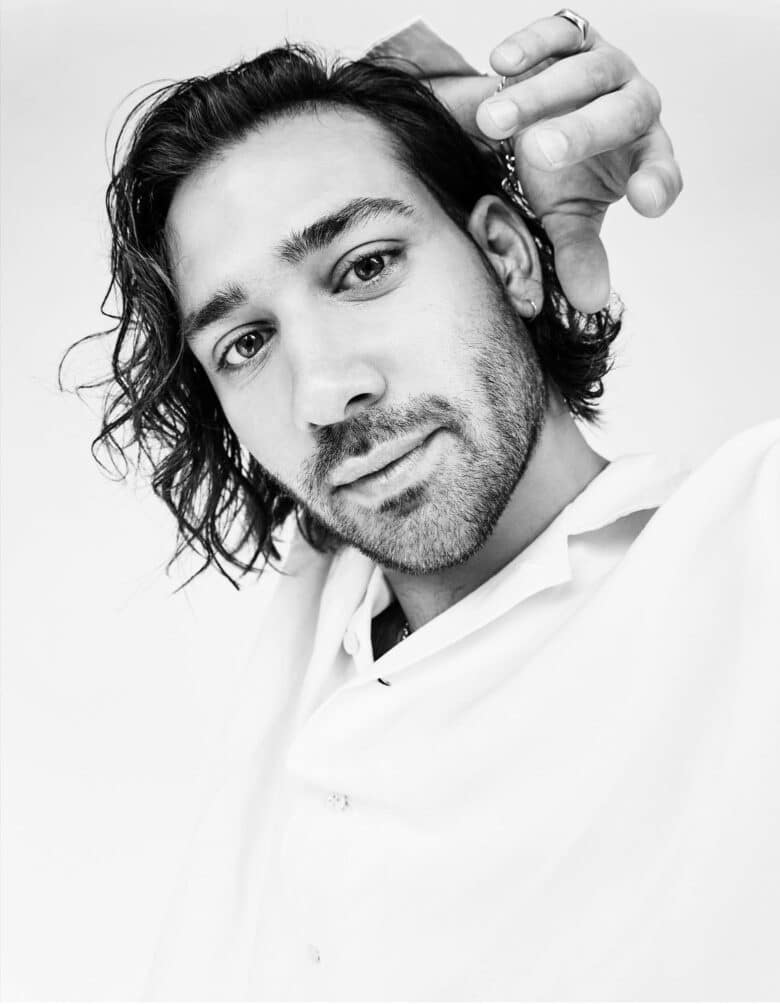 Even though he’s 26, has grown a beard and got long hair, Maxim Baldry still gets recognised for his childhood role in Mr Bean’s Holiday. “My career peaked in 2007,” he jokes. Since then, the London-based actor has enrolled in, and dropped out of, studying English literature at university and returned to the world of entertainment. As well as being the lead vocalist with the alternative indie band Terra Twin (check out their track “Eastern Boy”), he gave a moving performance in the Russell T Davies show Years and Years (2019) before returning to our screens this year to navigate “deep, philosophical, existential themes” in The Lord of the Rings: The Rings of Power. “I love playing outsiders,” says Baldry, who has always felt like one too. “As long as I can stay true to being a misfit in some way that’s my entry point to any character.” 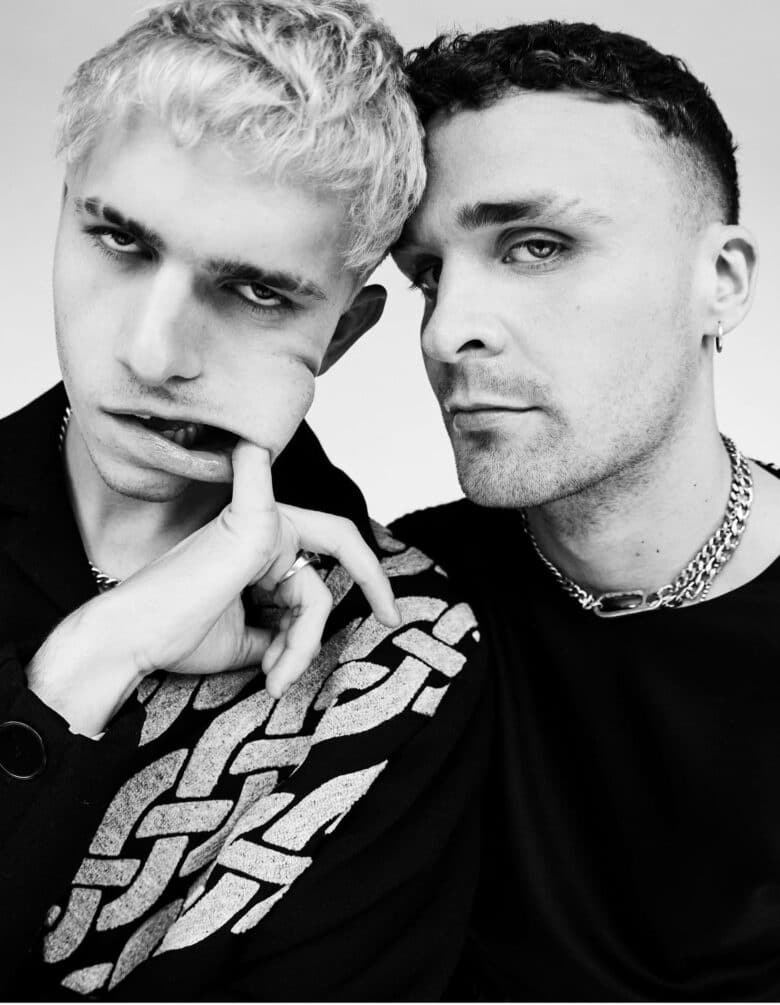 It took just two years for Sad Night Dynamite’s Archie Blagden and Josh Greacen, a pair of 24-year-olds whose style replicates their dark, electronic sounds, to grace the stages of Glastonbury. And this year’s appearance was extra special as the world-famous festival takes place in their hometown. It was one of the highlights of a 30-festival run this summer for the boys, who have been friends for more than ten years. “The best gigs we do are the weird ones in places that we weren’t expecting,” Greacen says. “We did one in Romania which was crazy. We didn’t have any expectations and it ended up being the most incredible show.” The pair started making music in school and now their sound and words pull on the heartstrings of hip-hop lovers, dub fanatics and lyricists, as well as finding fans in FKA twigs and Damon Albarn. 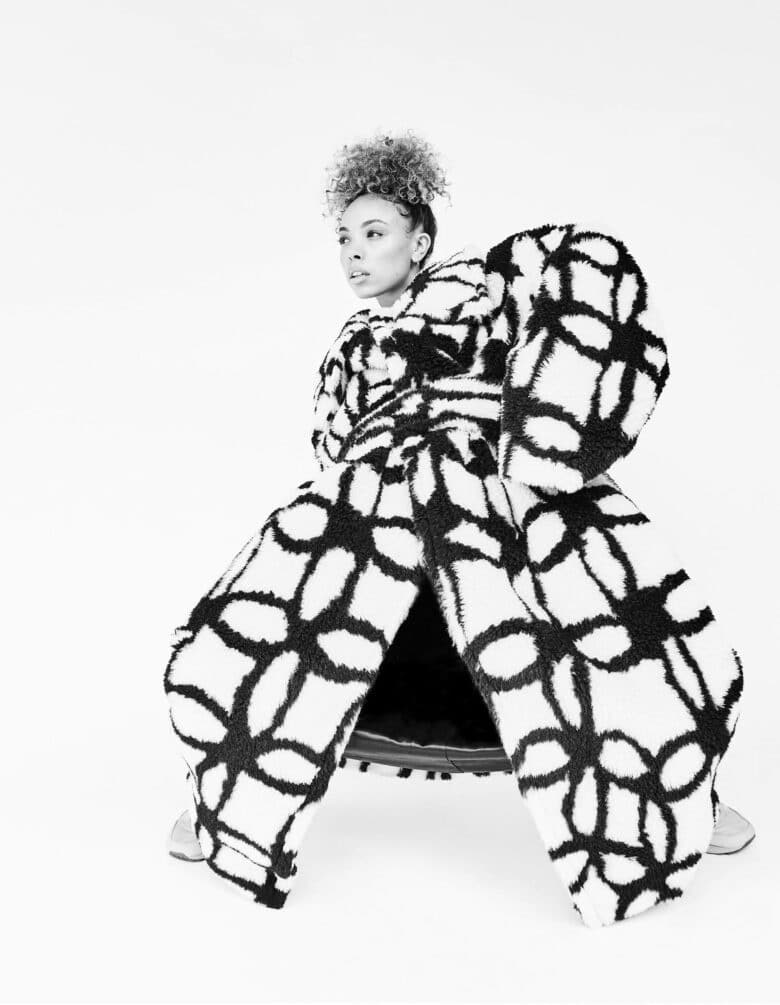 “I come from quite a conservative Muslim background. My parents weren’t very encouraging for me to pursue music.” Despite not having the support she hoped for at first, the 26-year-old “dark blues” singer Areej set out to make music her chosen career straight out of university. The history degree was to please her parents, but the music is for her, with “raw, real, honest and vulnerable” tracks like “Divided by Your Love” and “Bloodshed” – Areej holds few emotions back. As the singer from west London finds her feet with her soulful R&B, her sights are set on making music – and the freedom that will allow – her sole goal. And her parents are now behind her all the way.