“My body is not someone’s legislation — my body is my own,” yells Rakel Mjöll of Dream Wife as she performs their hit single, ‘Somebody’. These lyrics have been added for their Saturday performance at BST Hyde Park (remixed from the speech by Samirah Raheem) and it’s an electrifying sight to behold given recent events. Just a day before, on Friday 24 June 2022, the Supreme Court voted to overturn Roe v. Wade, plunging abortion rights into jeopardy across the US. At the time of writing, eight states have now banned abortion, and others are expected to follow suit or impose severe restrictions.

“If you have a stage, you have to use it,” Mjöll tells HUNGER after their support set for The Rolling Stones. “It feels like we’ve just walked into a glass window.” The band’s bassist, Bella Podpadec, who identifies as non-binary, corroborates: “It felt particularly alive performing it at this moment in time. Music can really convey things that you can’t put into words. It really holds space for collective feeling in a powerful way. Being able to be with other bodies and feel that anger and grief is powerful. I mean, all three of us were welling up and crying in response to Roe v. Wade, which is an attack on people with bodies like ours.” 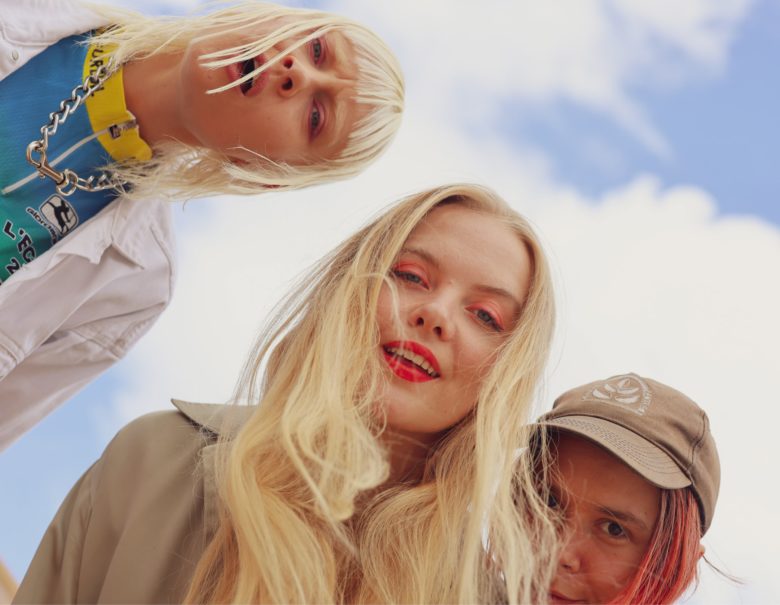 Formed in 2014, the London-based punk-rock trio, comprised of vocalist Mjöll, Podpadec, and Alice Go on guitar, have sought to create a “safer space” for those who don’t feel comfortable in traditional gig environments. They operate a “bad bitches to the front” policy at their performances, allowing women and non-binary people to experience a comfortable mosh pit, potentially for the first time. Of course, the term “bad bitch” doesn’t solely apply to those who identify as female, as Mjöll stresses in their BST Hyde Park set: “All you have to do to be a bad bitch is support your fellow bad bitches”.

Still, as Podpadec, explains, creating a truly safe space is complicated. “It’s a utopian vision. We’ve spoken a lot about the idea of working towards a safer space. We print out posters, we put rules up around the venue, for security, and via the way Rakel speaks to the crowd. But there’s only so much we can do. We invite the crowd to co-create something that is safe and that takes everybody. You can hope that everyone will work together, but you can’t guarantee it.”

Mjöll continues: “Everything we do is community-based. If we get any attention, we need to uplift our community. We need to get more bands involved that can lend their voice to what we’re about. Even being invited to do this show with the Rolling Stones is a big deal because we can say these things on stage. But we all need to be having this conversation about reproductive rights. It has to be held by everyone, it can’t just be a certain group or minority — it has to be every gender.”

Speaking about subjects like abortion or rape culture, the frontwoman adds, is quite a traumatising thing for one person to bear alone, and hence Dream Wife gain a sense of solidarity through being united as a trio. “Being able to present those topics within a unit and feeling safe to express that on stage takes a lot of trust. And at the end of the day, a good marriage, whether it’s platonic or romantic, is about feeling safe in order to build a better version of yourself and the world.”