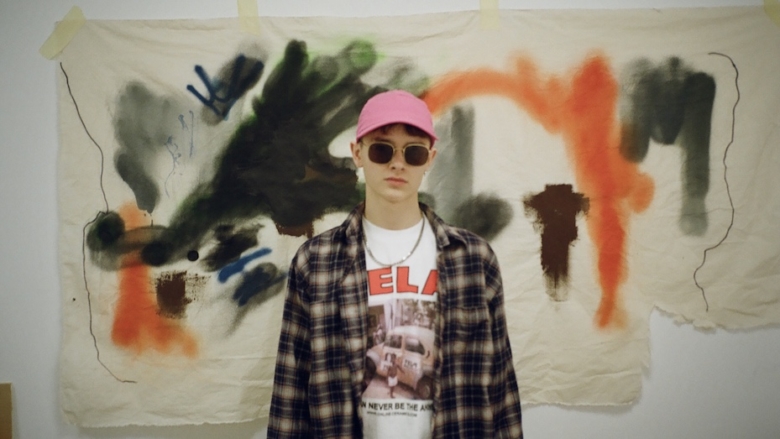 Given the current (dire) social climate, it’s little surprise that creatives feel a responsibility to use their platform to advanceconversations around inequality. However, artists jumping onto the bandwagon with feeble political conviction could learn something from Isaac Andrews – the 18-year-old artist whose as outspoken on Instagram as he is in multifaceted work across painting and collage.

From running his first exhibition in March 2018 as nothing more than a fresh-faced kid with a vision, Isaac has quickly developed a unique artisticdirectionconsistently underpinned by an earnest focus on social commentary. Drawing on everything from abstract expressionism to street art, he uses the canvas to shed light onissues like mental health and masculinity with an astuteness that exceeds his years. But it’s this youthful perspective, paired with a well-informed voice and natural ability, that has allowed Isaac to cement himself within the London creative scene: releasing his first art book last year, seeing his work on billboards across London in collaboration with Footlocker and gaining esteem from the likes of Denim Tears founder Tremaine Emory.

To delve deeper intoIsaac’s work and find out what the hype is really about, writer TJ Sawyerr pulled up to the artist’s Southbank studio to talk Instagram, ageism and privilege.

What’s good bro? Tell the people who you are and what you do.

So when did you first start making art?

I’ve always loved making things my entire life but it wasn’t until I was 15 when I found my love for art through school and realised there was something there to explore. Then I just started creating pieces from a place of boredom –and I loved it. That’s when it all started.

How would you describe your art and what is its purpose?

I don’t really go about trying to make beautiful images, aesthetic attributes always come second to meaning for me. In so far as its purpose, art has the power to change the world – good art that is, because most art is terrible. This power is different to any other medium.You can read an amazing book or listen to an incredible album and that can make you feel something, it may even change your outlook, but visual art can do something deeper than that. If just 1 person can take value from a piece of mine and reconsider their views on the issues that my work grapples with, then my craft is successful.

What’s been the biggest pinch me moment for you so far in your career?

Seeing my work on billboards across London. That was special. 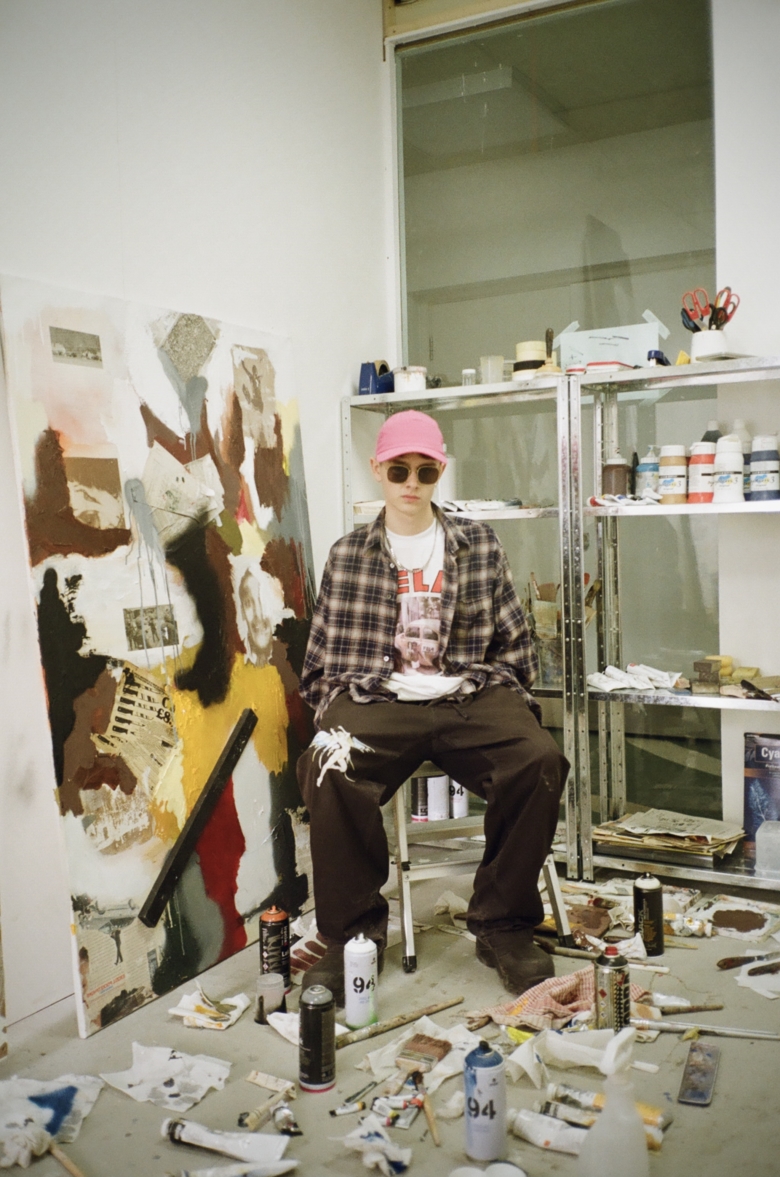 "I’ve tried to disassociate myself from the norms of the industry as much as I can."

How has it been for you breaking into this industry at such a young age? What were some of the challenges you faced?

When you’re a young kid, it’s hard, to begin with, to get people to take you seriously. [When I started this work] I was a 16-year-old kid and a lot of people questioned why they should place their respect and trust in someone as young as myself. I was very naive at that point but as I’ve matured I’ve tried to disassociate myself from the norms of the industry as much as I can because I’ve discovered the art and fashion industries to be somewhat boring. With social media it’s easy and acceptable to displace myself from those norms and I’ve realised that I don’t need to be involved in trends to find success. I’ve learnt over time to not worry too much about that external scrutiny.

When did you realise that your art would be your means of projecting your voice?

When I first started posting my work on Instagram and people started to take notice, expressing appreciation for what I was doing. That’s what made me believe that I could really use this platform to get my voice heard and start building a legacy.

Earlier, you alluded to your ideas around good and bad art, but can art really even be categorised in that way?

I completely accept the fact that art is subjective and I’m not one to say what should and shouldn’t be classified as art. I personally look for pieces with purpose and meaning, work that tells a story or evokes a familiar feeling. A lot of the art that I would class as “bad” are pieces that fall short in their significance, coming from a place of inauthenticity. Obviously I can appreciate a well-executed drawing or painting, but, when looking at the work across history that has changed the perceptions of art as we know it, all of them are purposeful, all of them make you feel something. If art doesn’t make you feel any type of way, there’s no real point in it existing at all.

Racism is one of the topics that you’ve addressed extensively through your recent work, what motivates you to be vocal on this issue?

Being a well-off, privileged white man, there’s nothing stopping me here, there’s no-one telling me what I can and can’t do in life. That’s not the same as for someone who’s not white and wealthy and, for me, having that privilege, I will never know what it’s to like to step out of my house and feel scared, or to doubt that I can achieve something because of racism. I’m never going to experience that, so people do often ask me how I can make work that centres around something that I cannot fully understand. I’m aware that it could be easy for my work to be misconstrued as tokenising or following a trend but for me it has never been that. Racism cannot be solved by Black people alone, white people have as important of a role to play in combatting this problem, and we need to do our part. If you’re able to help, then why can’t you? That’s the sentiment I always carry forward. 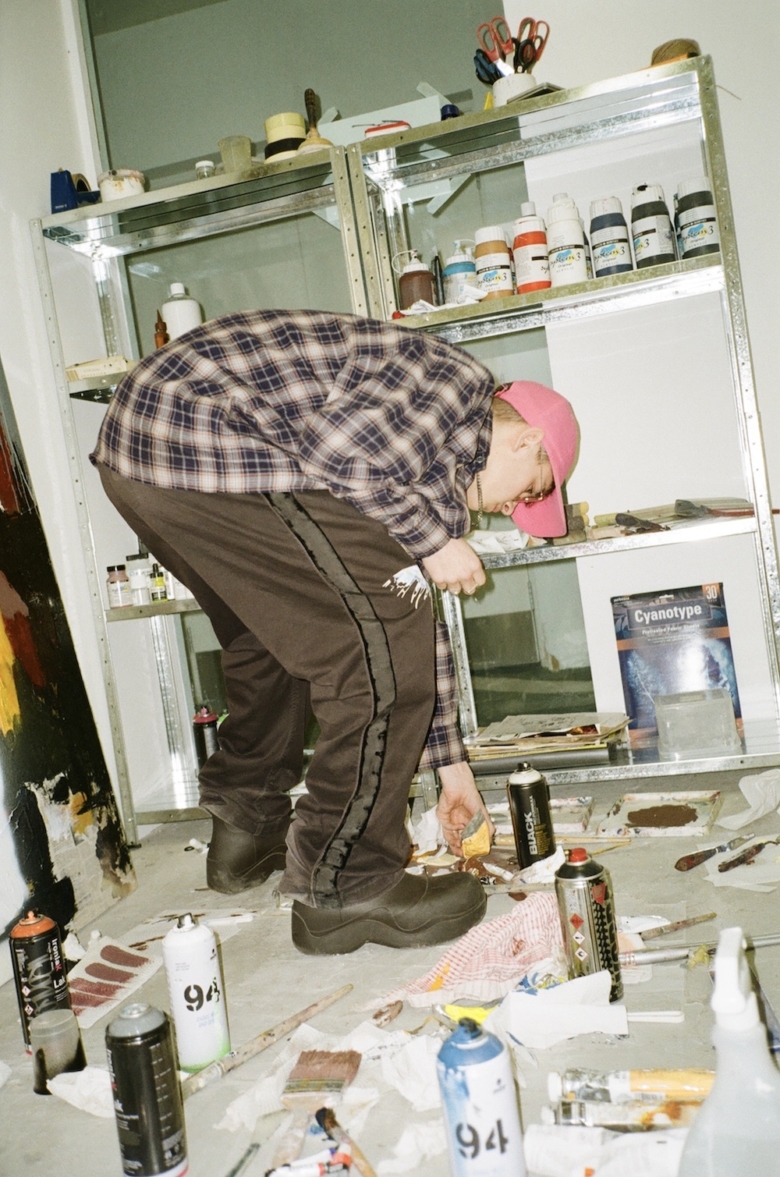 "If art doesn’t make you feel any type of way, there’s no real point in it existing at all."

On that topic, one of your politically-fuelled pieces Yet They Still Walk gained a large amount of traction amidst the explosion of the BLM movement last year. What can you tell our readers about that piece?

Initially I had planned a piece showing the Black people that had died at the hands of the police, but then I decided that it wasn’t my place to cover that. Instead, I thought I should shed light upon the white people who are killing these people so freely. I wanted to look at the police officers responsible for the murders of Black people over the past decade in the U.S. who were either acquitted or never charged in the first place. When I was researching, the list was horrible to look at, because there were so many names, and they just kept coming. I was intrigued by the idea of placing these police officers upon a wall, in this heightened position of authority, as a direct reference to the overriding power that they possess in society due to the corrupt nature of the U.S. policing system.

You’ve also released a shoe collaboration with Converse on the theme of mental health. Tell us how that came about and what it meant to you.

Converse London reached out to me, telling me about a project they’d been running through the lockdown that involved giving young creatives the opportunity personalise their own Converse shoe. Quickly I noticed that I could create a smiley face from the Converse logo, with two of the stars as eyes and a single arrow as the mouth. This project came around just after Mental Health Awareness Month and it was at the height of the first wave of Covid, when many people’s mental health had been deteriorating as a result of lockdown, so I decided the smiley face could become representative of that struggle. Nothing was originally meant to come from this opportunity, but having showed them what I came up with, Converse proposed that we run the shoe as a very limited collaboration, so I raffled a dozen pairs off and decided that all profits would go to the charity Mind.

Covid has really shaken things up across creative industries, how do you think the creative world will look once the pandemic is said and done?

Post-pandemic, the world will be completely different and I think that the people best fit to adapt to that world will be our generation, the youth. We need a new start, we need brands to be more considerate of environmental issues and social issues, and I think our generation will be the one that makes that happen, hopefully. I think amongst the youth there’s been a shift in ideology, we bring a completely different perspective. We’re the first generation to properly grow up with social media and the internet and I think it’s hard to say yet what that has done to us in terms of our outlook, but there are certainly a lot of new ideas that will come out of it.

What’s next for Isaac Andrews then? What can we expect?

I want people to see my art. That’s it. I want people across the world to see it, as every artist does, but I don’t really care for success or clout or fame. That all seems quite pointless to me, because I want my art to serve its own purpose. In terms of what’s next, as soon as it’s possible, I want to have a big retrospective exhibition. Otherwise, what happens, happens.

Love what you’ve seen so far? Check out Isaac’s work here and via the gallery below.  Follow TJ here. 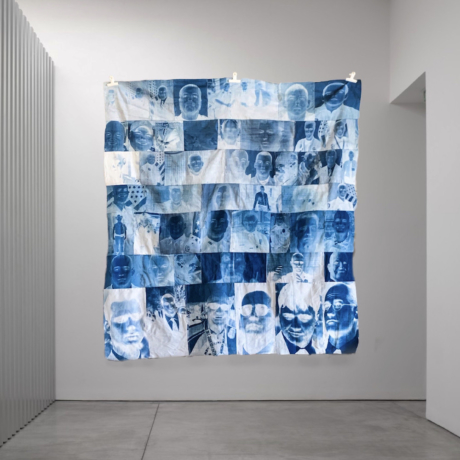 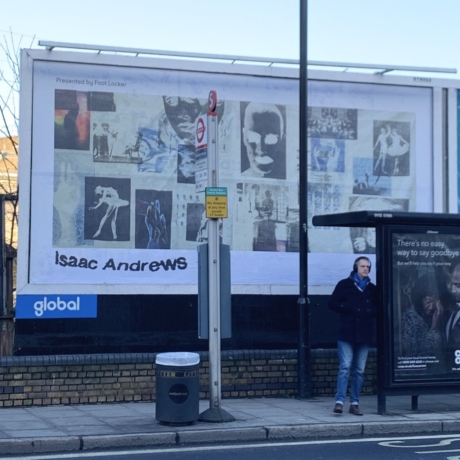 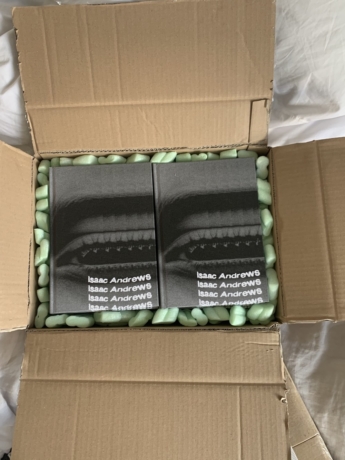 'Yet Still They Walk' by Isaac Andrews

'6507' by Isaac Andrews, among a selection of Isaac's work presented on London billboards by Footlocker