On 14 October this year, the climate activists Phoebe Plummer and Anna Holland of Just Stop Oil – a coalition of groups putting pressure on the government to end oil contracts and production – caused a media frenzy after launching the contents of a couple of cans of tomato soup at Van Gogh’s Sunflowers (1888) at London’s National Gallery. To say it was divisive was an understatement: it cued mass debate and an outpouring of worry and speculation about whether the artwork had suffered any damage. But the painting was protected by a sheet of glass, rendering the act not destructive but peacefully provocative – perhaps the very thing we all needed to remind us of the rising severity of the climate crisis.

Since then, Just Stop Oil, which was formed in early 2022, has made numerous headlines for protests after activists targeted Johannes Vermeer’s Girl with a Pearl Earring (1665) at the Mauritshuis museum in The Hague and sprayed orange paint over UK government buildings including those of the Home Office and MI5. As Plummer says, “33 million people in Pakistan have had their lives ruined by floods”, but it’s food thrown at a painting that will get the world talking. In the wake of these protests, and as Plummer and Holland continue to work to maintain mass attention, HUNGER caught up with the activists to uncover why soup was chosen to help wake the world up.

Hey, Phoebe and Anna! To kick us off, please tell us how you first got involved with Just Stop Oil.

Anna Holland: I joined Just Stop Oil in June of this year because I have tried everything else. I’ve spent years of my life organising marches and petitions, but it got us nowhere. For years I just felt like I was yelling at a brick wall – with Just Stop Oil, using direct action, we are finally breaking through that brick wall.

Phoebe Plummer: I joined Just Stop Oil in August because it was the first thing to really give me hope about my future. Before Just Stop Oil, I was terrified about how much pain
and suffering was in the world, but in Just Stop Oil, surrounded by brave, beautiful people, I feel like finally we are making a
real difference.

What specific acts are you campaigning for?

Why did you throw soup on Van Gogh’s painting?

AH: Because we are in civil resistance against our criminal government who, by attempting to push forward more than 100 new fossil fuel licences, are putting all of our futures in jeopardy. Right now we are fighting for our lives, and we must do that through any and every non-violent means necessary.

Why soup? And why specifically Van Gogh’s work?

PP: We chose Sunflowers by Van Gogh because it is so iconic and so beloved. Everyone has a special connection to it. So when we threw the soup it made everyone pause for a second
to really consider not just what we did but why we did it. We chose to throw soup rather than paint to symbolise the link between the climate crisis and the cost of living crisis, as they are both one crisis driven by our government’s greed for
fossil fuels. 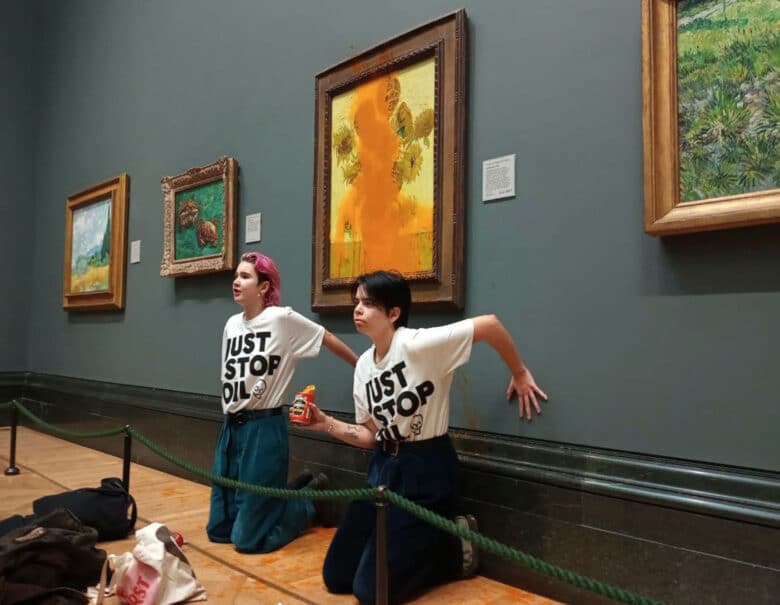 I imagine platforming the protest via art irked a lot of left-leaning people in the creative industries – a group climate activists don’t always target. What are your thoughts on that?

AH: The climate crisis transcends all divisions, political and social, because we will all suffer as a result of it. Because of this, we all need to fight together against our genocidal government, which is fuelling this crisis.

Do the reactions to one protest inform where to go next?

PP: As a peaceful protest group, we take our inspiration from those who came before us. Movements such as the civil rights movement, the suffragettes and queer liberation were all met with controversy and backlash, but they are looked back upon as those who stood on the right side of history.

AH: We are in civil resistance against our unlawful government and we have to do that through any non-violent means necessary, so we will be escalating our actions until our demand for no new oil is met.

Just Stop Oil is protesting daily at the moment. Are you finding high frequency is affecting public response/apathy, or is it a “more is more” effect? What do you think is the key to creating impactful non-violent direct action tactics?

AH: The key is determination. Stepping up to take action against a government that has been found guilty of failing us by the high court is one of the scariest decisions a person can make, but what is scarier is the future we face if we don’t fight. We need to be fighting consistently, regardless of the hate or legal pushback we receive, because it is only through sustained non-violent action that we will win.

PP: Thirty-three million people in Pakistan have had their lives ruined by floods, but after just two young people threw soup at a painting, more people than ever are talking about the climate crisis and the cost of living crisis. We are fighting for our lives – why would we stop?

Where do you draw the line with non-violent direct action tactics? Is there one?

PP: We are a peaceful group, so we draw the line at any action that is not non-violent.

AH: In this fight for our lives, we have to do whatever is non-violently necessary.

There has been a rise of environmental campaigning over the past few years – do you feel that activism has had to get louder and more prominent in the public domain to be successful?

AH: In April and August this year, we took our fight to the heart of the oil industry, to oil terminals and petrol pumps, but it made no difference. No one knew about it. As a result, we have to make our fight public-facing, otherwise we wouldn’t get the conversation or pressure on the government that we need.

PP: We will only consider ourselves successful when the government meets our demand for no new oil, so until that point we are going to keep fighting and keep escalating.

Why do you think there is often a generalised and stereotyped idea of climate activism? Is the media to blame, or is there an argument that many climate activists go about protests in the wrong way?

AH: We are fighting not just for our lives, but for your lives and the lives of those in the global south. The only reason people don’t understand that is because we have been misrepresented by journalists and reporters who are failing to report on us fairly for the sake of whichever headline will make them the most profit. If the journalists did their job and genuinely reported on us fairly and objectively, our fight could be won tomorrow.

PP: In just one day there was more morning-news coverage of Jeff Bezos flying to space for ten minutes than there was of the climate crisis across all of 2020. Why does the media care more about one overcompensating, planet-destroying billionaire than they do about the biggest threat we have ever faced?

AH: I want the general public to know that if you are scared about your future, or the future of your children, or if you are angry about the fact that our government is forcing us into food banks and fuel poverty while [its members] continue to live in luxury, you are not alone in that. We feel the same fear and anger, and that is why we are fighting. Join the fight, act in civil resistance with us, and this could be won tomorrow.

PP: Anna and I are not the criminals here – we’re two scared little kids acting because we are being denied the right to grow old. The true criminals are our government, who care more about insulating billionaires’ pockets than they do about insulating British homes.