It’s 11 am on a Wednesday morning and I’m pacing around Kenley Aerodrome, a former military airfield in south London that played a key part in the Battle of Britain back in 1940. Today it’s the backdrop for a gliding school and picturesque dog walks on sleepy Sunday afternoons. It’s also the place where actor Kit Connor learnt to ride a bike at the tender age of six. A nasty fall left him too traumatised to cycle again for years, but thankfully he’s put his bicycle-related trauma to one side to meet me here on what is possibly the windiest day of the year. Perfectly on time, he emerges from a grove of trees, clad in Carhartt and towering much taller than I’d anticipated at more than 6ft. He gives me a friendly wave and a reassuring smile before joining me on a walk around his former stomping ground. “I’m so sorry I brought you somewhere so windy!” he says attentively, pushing his messy chestnut curtains out of his eyes. There’s a hint of facial hair growing through and it’s clear that the last of his teenage features are starting to fall away. Manhood is impending.

The 18-year-old grew up just down the road in Purley, with his advertising exec parents and older siblings – a brother and sister who are currently at university. Connor, being the youngest, was somewhat reserved growing up, but it was actually this timidness that led him into acting. “My parents signed me up for Stagecoach [Performing Arts School]. I think it was just to get me out of my shell. I was quiet, especially around new people, so I was very much in need of something to help me become more confident.”

He was eventually signed to the Stagecoach agency, where he secured an Xbox commercial. “I was like, ‘Oh my God, this is so easy! You just go and then get the job.’ Obviously, that streak didn’t quite last, but it was really fun. I signed with a different agent and I think I was about nine when I did my first film, and by then I was realising that this was more than just a bit of fun.” 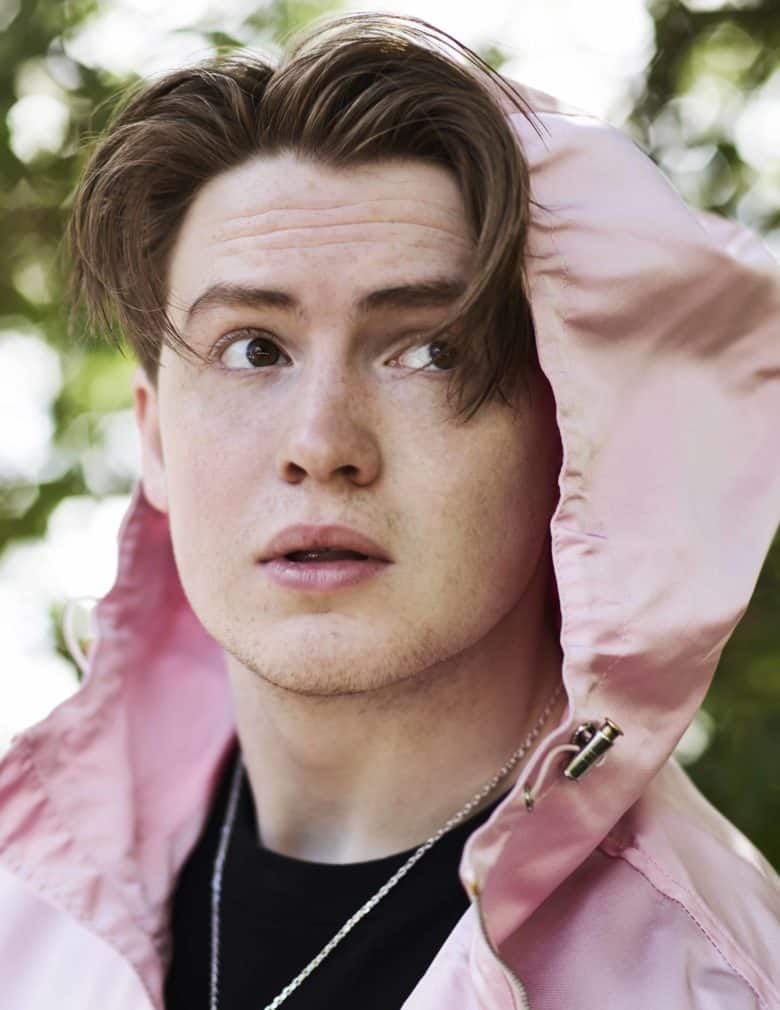 Trying to break into the entertainment industry at such a young age is not easy – it’s intense, gruelling and requires a thick skin. Connor admits that his work as a child actor took its toll. At one point, he was attending three auditions a day, five days per week – taking him away from school and the chance to live a life that resembled that of his peers. “You have to deal with rejection quite quickly. If you can’t, then it’s going to be tough for you,” he says frankly. “There was a film that I was really excited about doing, I really liked the director, I really loved the script. I got down to the last two kids for the role and then I actually got told by the director that he wanted me. I thought, ‘This is my Steven Spielberg ET moment,’ and then we did a screen test and I think the studio decided I didn’t quite fit with the role. I was definitely very upset. Since then, I’ve never taken things for granted until they tell me officially that I have won the part. I almost always expect to be rejected, which is a good mindset. It’s a slightly sad mindset, but it’s a good mindset.”

Despite a string of minor roles in films including Ready Player One and Slaughterhouse Rulez, it was his part as a young Elton John in the biopic Rocketman that solidified his rising-star status. “I first directed Kit when he was 14,” Rocketman director Dexter Fletcher tells me over email. “We shot an ad in South Africa and I was very impressed to see him writing Japanese calligraphy in his spare time. He was the first actor I thought of when it came to casting young Elton John, as he has a strong sense of self, a quiet intelligence and a quick natural instinct for the craft of acting.”The coveted role, which sees Connor blasting out a rendition of the Elton classic “I Want Love”, was the first time that Connor started to see a shift in his relationships. People who until then hadn’t given him the time of day suddenly started to pay attention and he began to question the intentions of those around him. “There were definitely a few people who I felt were only speaking to me because of my career. As an actor it’s something you’re always warned about if you ever get successful. I think for me, it’s helped by the fact that I’ve had a slow uprising. It means I’ve been able to make friends who I know aren’t there because of the acting,” he says with a shrug. “It also means that I’m latching onto those friends and not letting them go, because I don’t know who I’ll meet in the future. It is difficult, that idea of second-guessing people. I suppose if there’s one way to get trust issues, it would be that!”

With the success of Rocketman, what seemed like it should have been a career-defining moment for Connor was shrouded in uncertainty when the pandemic closed down film and TV productions internationally. At a time when roles should have been pouring in, the entire industry came to a standstill, and Connor was faced with the reality that he might have to look at other career options. “During Covid, there were certain points when I was like, ‘I might never work again,’” he tells me candidly. “I always felt that acting was so much about momentum in the industry. Rocketman came out in 2019, and I was like, ‘This is great,’ and then Covid hit and I was like, ‘OK, this break is going to be a lot longer than I thought it was going to be.’ Getting Heartstopper was the biggest sense of relief because everyone was asking me about going to university, and I was like, ‘I don’t know. If I get a job that is good enough, then great, I probably won’t go, but if I don’t get that job, I suppose I might have to.’” 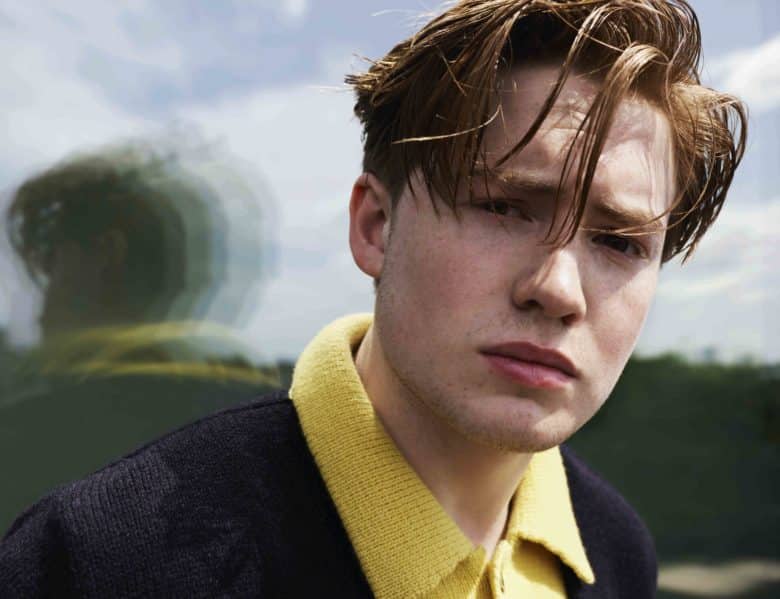 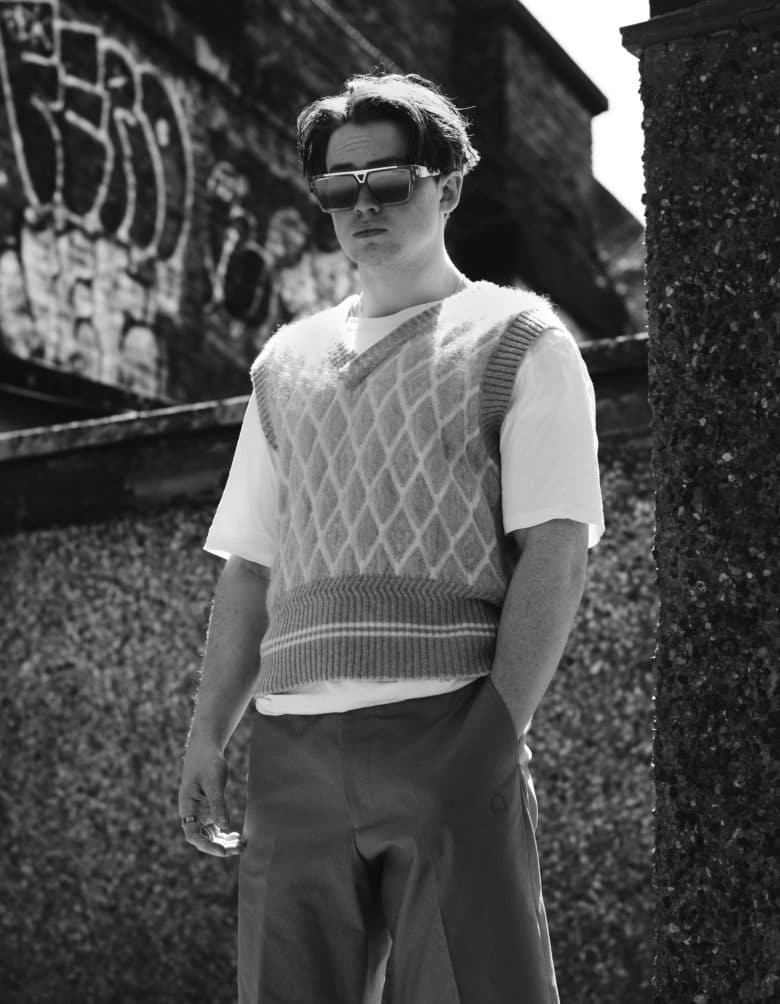 Kit wears vest by S.S.DALEY, shorts by MAXIME, sunglasses by LOUIS VUITTON, stylist’s own t-shirt and own rings.

Heartstopper is why we’re meeting today. I see Connor smile a bit when he mentions it. Based on the webcomic by Alice Oseman, the series follows protagonist Charlie Spring as he falls in love with his rugby player friend Nick Nelson (played by Connor). Together, they navigate the queer experience throughout school alongside a string of vibrant and familiar characters.

It was in late 2020 that Connor found himself submitting a tape, surprisingly for the role of Charlie. “I look nothing like him, so I thought I probably wouldn’t get it, but I thought I’d give it a go and I think they realised that I am a lot more suited for Nick, which, honestly, thank God!” As Nick, he’s charming, affectionate and emotionally vulnerable. Some of these traits shine through in scenes with his on-screen mother, the Oscar-winning actress Olivia Colman. In the final episode, there’s a scene where Nick tells her he’s bisexual. It’s heartwarming, honest and a conversation that many openly queer individuals will be able to relate to. “Kit is that magical mixture of beauty, gentleness, wit and presentness. He was a joy to work with. I wanted to adopt him,” Colman tells me, adding context to their powerful chemistry.

Joe Locke, his on-screen love interest who plays the role of Charlie, echoes the sentiment, saying: “Working with Kit was so great. He made my first job so much easier, with his great professionalism and work ethic. He’s such a kind person, and has the unlearnable skill of making all those around him comfortable without even trying.”

The series has already been renewed for series two and three by Netflix. “After all of the amazing love and support that we got from the first season, of course the whole team was hoping that we’d get renewed and be able to do it all over again, but the fact that we got two more seasons really just showed us how much Netflix value Heartstopper as a story and that was so wonderful to hear,” Connor beams. 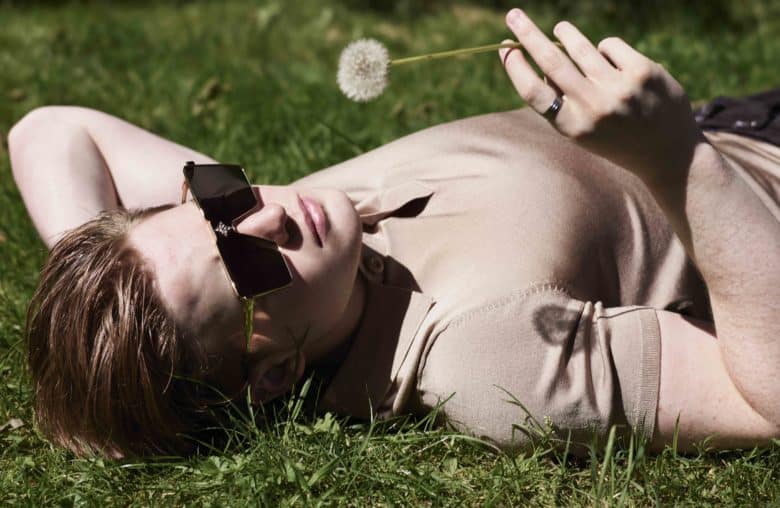 Kit wears top by SANDRO, sunglasses by LOUIS VUITTON and own rings.

The feverish fan following has been an unexpected symptom of the show’s success, with Connor’s Instagram following ballooning from about 200,000 before transmission date, to nearing four million at the time of writing. The response on Twitter has been particularly loud, and the curiosity around Connor’s sexuality has been top of the agenda. He nods pensively when I mention a particular tweet where he vented at anonymous fans guessing at it. “That tweet I posted pressed the importance of respecting people’s own journeys and I think it highlights the risks of outing someone and making someone feel uncomfortable,” he says. “For one thing, I am not a big believer in labels. I believe that they are extremely helpful for some people in terms of self-understanding and self-realisation, but I prefer not to think too much about labels. I don’t feel like I have to tell the world about my sexuality. I completely understand that many fans want queer representation to be authentic and they want to know whether it is authentic, but at the same time you shouldn’t make someone feel uncomfortable to the point where they have to tell a stranger about their sexuality.”

We’re reaching the end of our walk and we decide to take a seat. We’re both positively dishevelled – which is to be expected, given we’ve been walking for almost two hours in high winds. Despite our short encounter, I’ve already formed a pretty well-rounded picture of who Kit Connor is and what he stands for: despite his ultra-rapid rise to teen heartthrob, he remains a pretty normal teenager. He’s anxious about his impending A-levels, and, like many other 18-year-olds, he’s ready to grab life by both horns and see where it takes him. In his downtime, he watches Modern Family and when he’s sad he’ll curl up and watch About Time – “I love a rom-com!”. Friends and family are at the centre of his universe, and he often mentions his desire to make his parents proud and include them on this wild ride. He allocates a lot of time to the gym, which he says centres him, and helps him gain some composure while he navigates life as one of Britain’s next big acting talents. But the most compelling thing about Kit Connor, and perhaps the thing that separates him from other 18-year-olds, is his ability to express warmth in a way that transcends any sort of physicality. In his nature, how he engages in conversation, in the way that he plays his characters, there’s a compassion to them, and to him, that offers a unique sense of reassurance. He’s here to make sure others feel seen, and seen we feel.