The actor Lili Reinhart looks relaxed at home in the San Fernando Valley. She’s sitting in her kitchen wearing only an oversized grey T-shirt while her miniature schnauzer mix Milo sits solemnly at her feet.

It’s still early morning but she’s been awake for a few hours, a side-effect of what she describes as being “a ball of anxiety”. Not one to shy away from open conversations about mental health, she candidly explains how her open summer has left her feeling a little uneasy. She’s so used to being back-to-back with projects that sitting in her boredom feels almost alien to the 26-year-old. “I am trying to not run away from the fear of being bored and sit in the stillness of having time off because I constantly work,” she says. “I am going to take the opportunity to travel and to push myself to be more social than I normally am. I tend to isolate myself, like a princess in her castle.” A few seconds later and we’re already sharing coping mechanisms for our respective mental health endeavours. It’s instantly disarming and she seems totally at ease with being vulnerable – not something you would expect from the next generation of Hollywood’s talent. 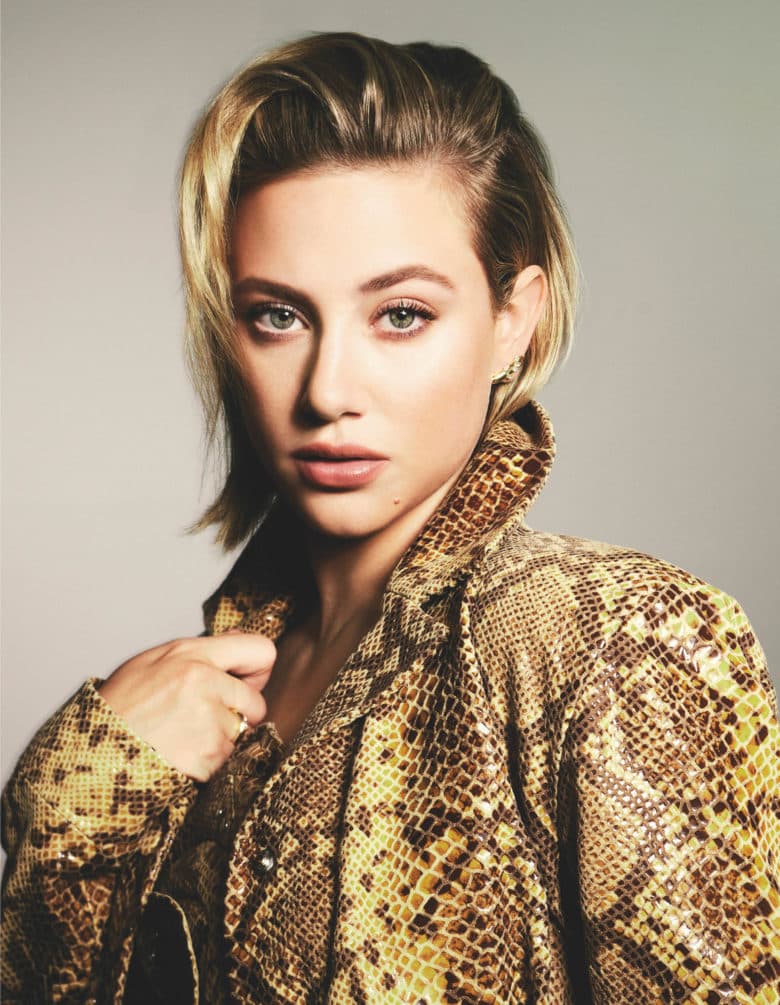 Lili wears jacket and top by SAKS POTTS and earrings and ring by GRACE LEE.

Born in Cleveland, Ohio, Reinhart started acting at the age of 12, but it wasn’t until she was 19 that she received widespread recognition for her role as Betty Cooper in the CW hit Riverdale. Some five years later, with filming about to start for its seventh and final series, Reinhart is a household name. She has a string of acting credits under her belt, including Hustlers, in which she starred alongside Jennifer Lopez and Constance Wu, and Chemical Hearts, the Amazon Studios rom-com that she also executive produced. She has also amassed an impressive Instagram following of more than 28 million – a testament to her likeability. “I genuinely don’t see myself as famous though,” she says when I start to quiz her on her rise. “In fact, I hate that word. I [also] don’t like the word ‘celebrity’ because it doesn’t feel true. It’s a little bit of imposter syndrome, but I also think it’s dangerous to start identifying with that word. I don’t want to start navigating my life through that lens. That sounds very treacherous to me.”

Her upbringing back in Cleveland alongside her steady career path has meant that she has been able to stay grounded. For the first two series of Riverdale she lived in a modest studio apartment, somewhere that felt worlds away from her appearances at Comic-Con, which she confesses made her feel like a “fucking rock star”. “I think I’m very good at keeping the ego in check. As soon as you start to lead with your ego, people can smell it from a mile away. You’re an actor, get over yourself! It’s just so cringey when people think that they’re so incredibly interesting, like more interesting than the average person.” 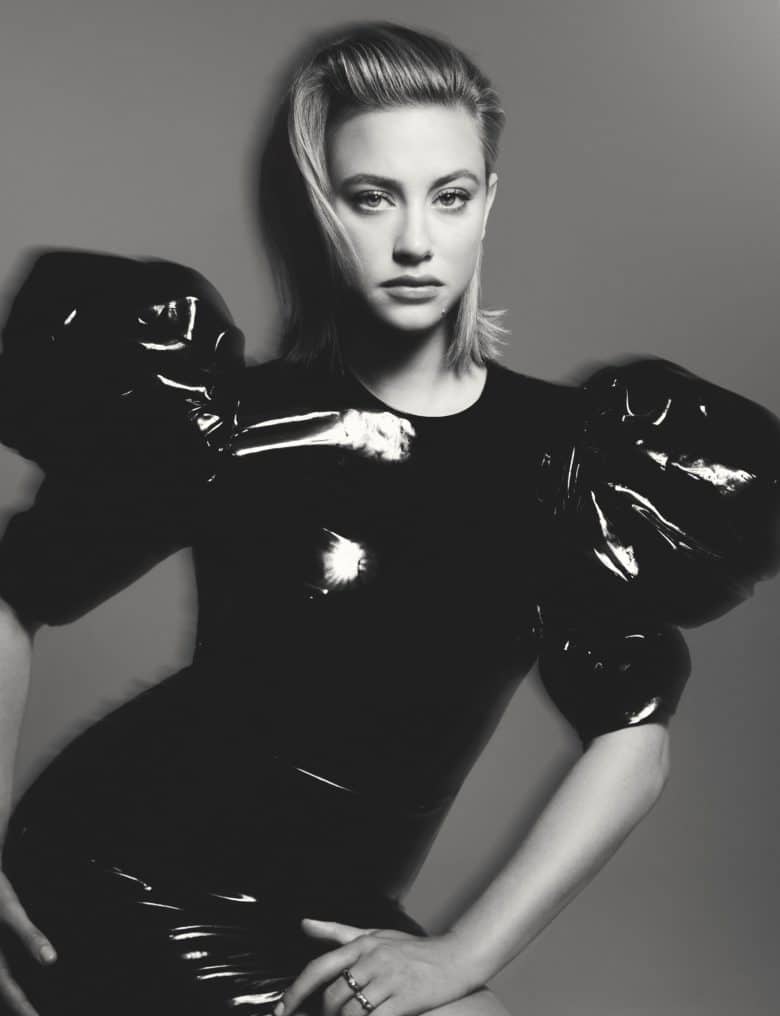 Despite shunning the idea of “celebrity”, she clearly still has to handle some of the downsides of being a public figure. She tells me that during a recent search through tagged photos of her on Instagram, she found some paparazzi shots that she had no idea had been taken. “I did a double take, like, ‘Is that my front door?’ It was me picking up my food delivery. That feels incredibly invasive. I’m talking about feeling like a princess trapped in a castle and it’s, like, can I go outside or is this dragon going to fucking eat me?”

It’s not her first case of unexpected and unwanted attention. Earlier this year she went viral after speaking out in response to news that Kim Kardashian had allegedly lost 16lb in three weeks so that she could fit into her Met Gala gown. The result was hordes of Kardashian fans bombarding her social media, alongside a string of news articles drawing further attention to Reinhart’s polarising comments. “You’d think I would have learnt my lesson by now!” she begins when I ask her about the media frenzy that ensued. “I don’t want to sit back and have young women and men think that that is normal. I was someone who at that point was, and still is, dealing with disordered eating, and it was just very triggering for me. I stopped myself and said, ‘I really fucking hope this shit doesn’t turn into 30 articles because people already think I’m this annoying girl who has shit to say all the time.’ Why was I the only one? That is absolutely infuriating and pathetic. Me? No one gives a shit about me or what I think.” 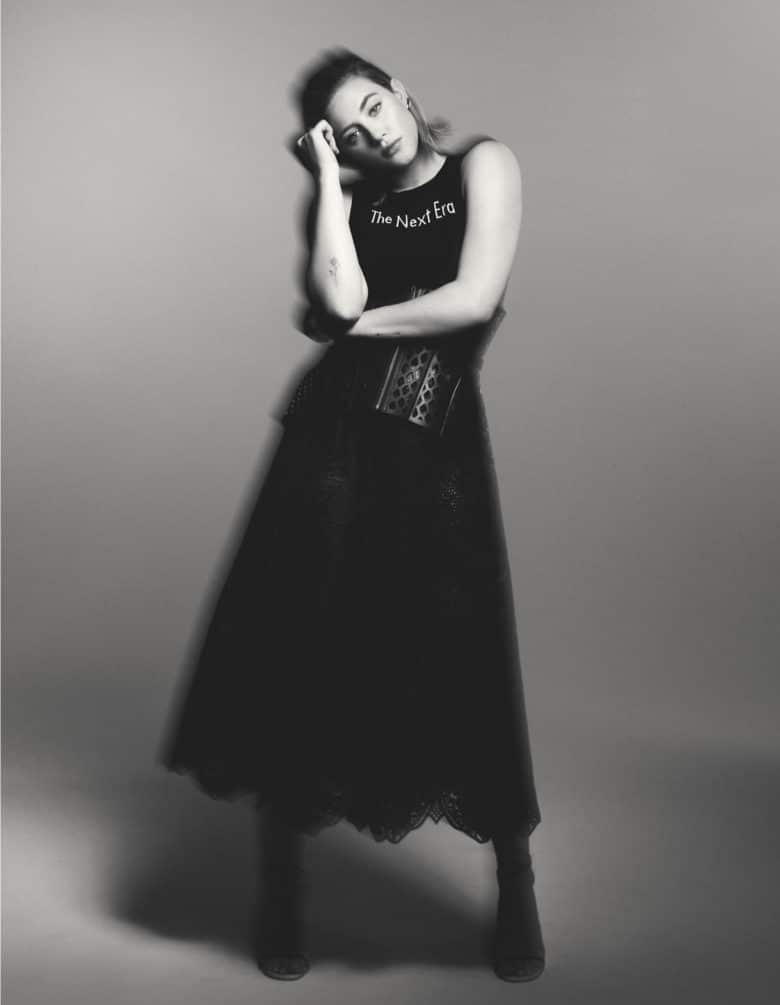 She was further frustrated to see that a number of well- known names were popping up in her inbox to applaud her for speaking out. “Famous people replied to my Instagram Story and said, ‘Thank you so much for saying something.’ I’m like, ‘Yeah, it would have been really nice for you to say something too, but I guess I’ll just take the blunt force of Kardashian fans for the sake of all of us.’ It was disappointing to see so many people thank me, but not do it publicly because you’re afraid of people attacking you. I get it, it’s not easy. The worst thing in the world is to see your name trending on Twitter. It’s the scariest thing you’ve ever seen in your life.”

Despite the controversies, she has not let the media storm hinder her acting prowess. In August, she starred in the Netflix film Look Both Ways, a joyous rom-com that follows protagonist Natalie, played by Reinhart, as two versions of her life play out before us: one where she has a baby, and one where she doesn’t. As well as taking top billing, Reinhart took on production duties, overseeing the casting, script edits and the search for a director. She eventually decided upon Kenyan filmmaker Wanuri Kahiu. “We really wanted to have a female director who was a mother to tell this story, and we found such a beautiful filmmaker [in Wanuri]. We ended up shooting in Austin, Texas, and had the best time.” Reinhart says. “I hope [the film] evokes a sense of comfort, especially for young mothers, in knowing that your life can look a million different ways and there is no right or wrong way.” 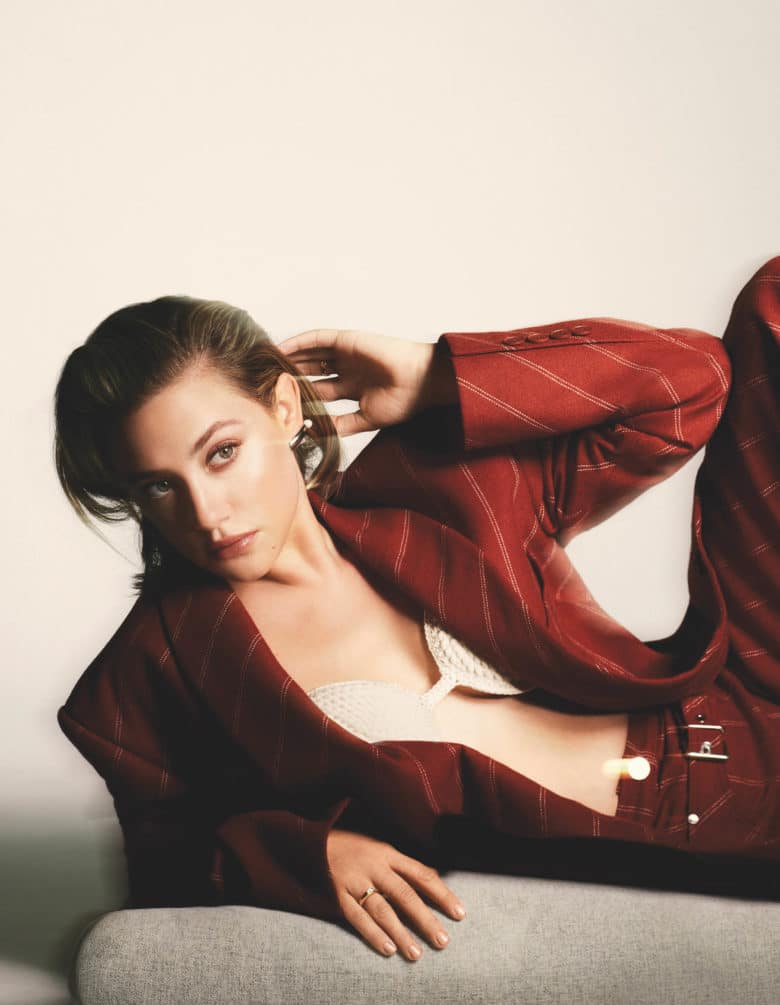 In October she heads back to Vancouver to start filming her final series as Betty in Riverdale, the show responsible for Reinhart’s breakthrough. While critically acclaimed, the show has had its fair share of criticism over the past few years owing to eyebrow-raising plotlines and dialogue. Reinhart describes the impending series wrap as “bittersweet”. “We [the cast] want to enjoy these final moments being in Vancouver together, and rejoicing in the craziness that is our show because it is crazy and we all know it!” She laughs. “I think I dread the wrap day because I know that I will be sobbing. It’s like a break-up or graduating from school. It’s this monumental thing that is ending. You’re so thankful for the experience and you’re so fucking excited for what is on the other side but there’s going to be a period of mourning. I’m such an intense person and I feel so deeply, I know it’s going to be extremely difficult.”

Speaking to Reinhart, I’m taken by her need for normality. For the duration of the call she speaks freely without a publicist hovering over her every word, and spends the conversation blissfully chomping on a breakfast pastry. I ask her what she was up to the day before and she tells me that she met a friend for lunch before cosying up with two pals to watch the horror film The Babadook accompanied by a selection of Domino’s pizzas. It’s the life of your everyday 26-year-old rather than that of a critically acclaimed actor. Despite being at the forefront of Hollywood’s next generation, she doesn’t strive for the high life and she’s quite content going to work and living in her own little bubble, ensuring she makes time for her tight-knit inner circle. She laments her friends having normal 9-to-5 jobs as it means she has to wait for them to finish work each day. Of all the glitz and glam that her career affords her, comfort is key. 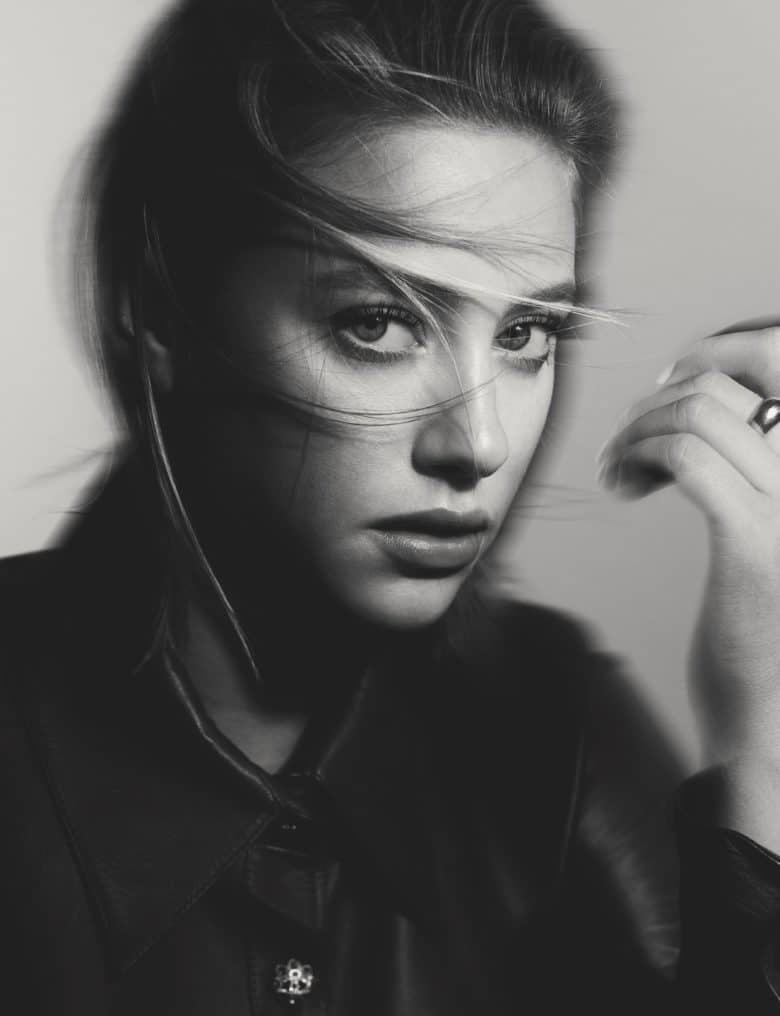 Lili wears jacket by CHANEL and ring by YARA SOPHIA.

Despite spending her time chasing normal, there’s no denying that Lili Reinhart is nothing of the sort. Her acting mastery alongside her burgeoning production company, Small Victory Productions, show that she has got a firm future ahead of her, and her fearlessness in speaking out against things that matter to her prove that while she might feel like a princess in a castle, Tinseltown’s new queen is firmly in the making. Chloë Grace Moretz on fame and social media: “I basically became a recluse” 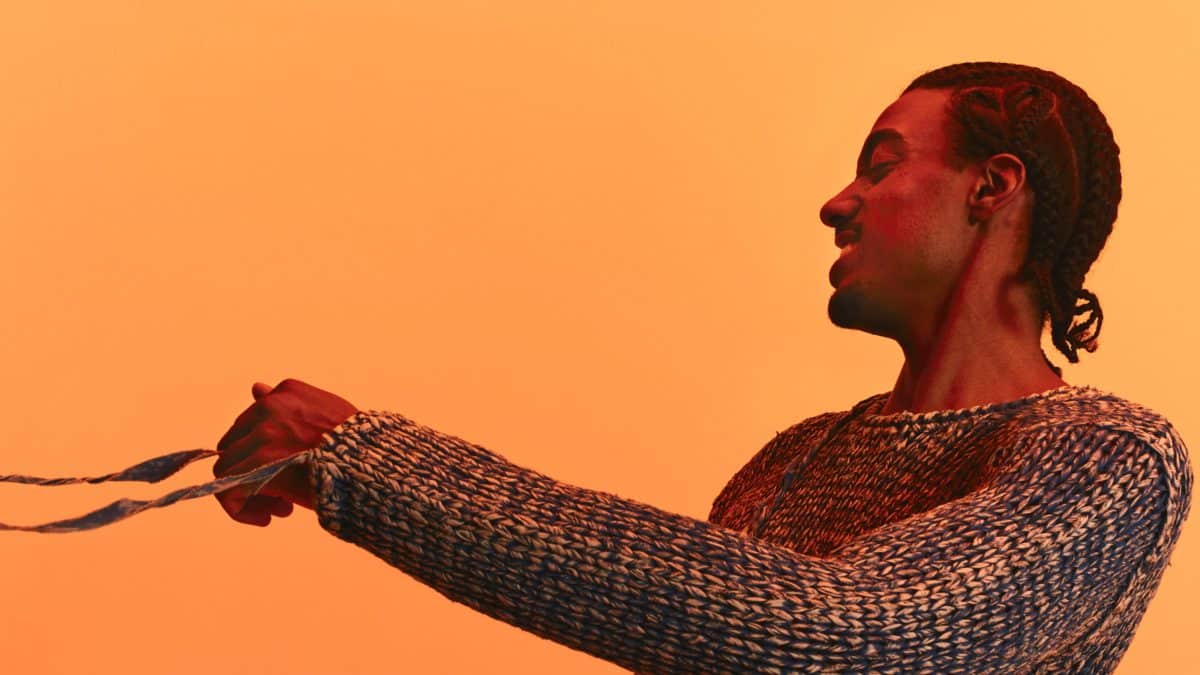 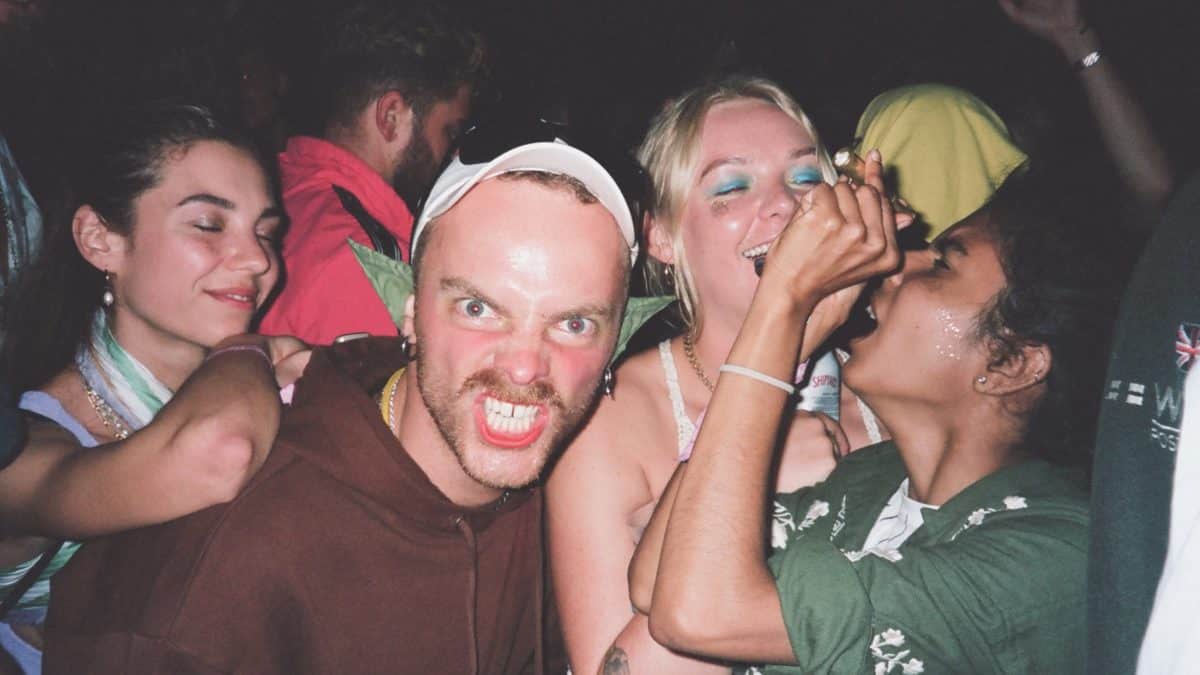