“It was an electric time… there was really something in the air in that college,” Mac Wetha tells HUNGER over Zoom, with a tangible sense of excitement when looking back on those days. He’s talking about the time that he met the rest of the NiNE8 collective – a group of multi-hyphenate musicians that joined forces in the name of collaboration and like-mindedness – a college project that blossomed into something that maybe none of them really quite anticipated. After the first song they released together, Lil’ Bic Lighter, garnered over 10,000 listens in a week, the members realised they might have something special on their hands.

Alongside Lava La Rue, Biig Piig, Nayana IZ, LorenzoRSV, Bone Slim, Nige, and L!BAAN, Mac Wetha started to find his feet as a producer in the “family-like” group, whilst also playing “hardcore, heavy” music as the frontman of his other band. But now, whilst NiNE8 is still alive and better than ever, his band have since separated.

With the need to perform, to command the stage as a frontman, and to satisfy the cravings of musical limelight during his band days, Wetha set out on solo endeavours for the first time – a creative change that, as he explains, was nothing short of a challenge. 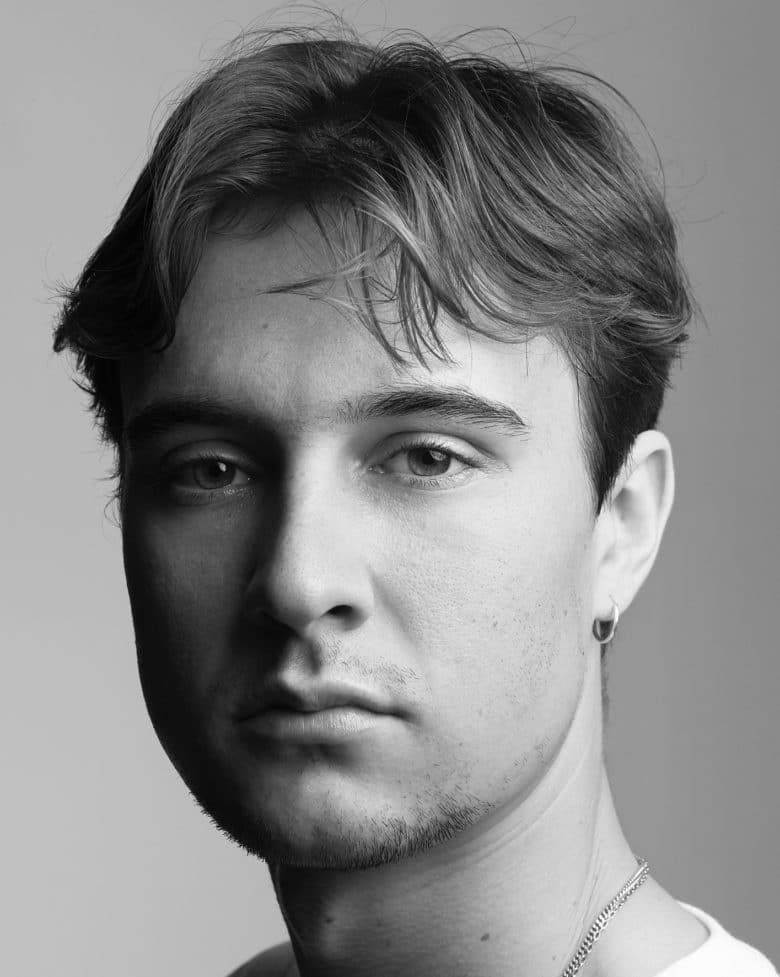 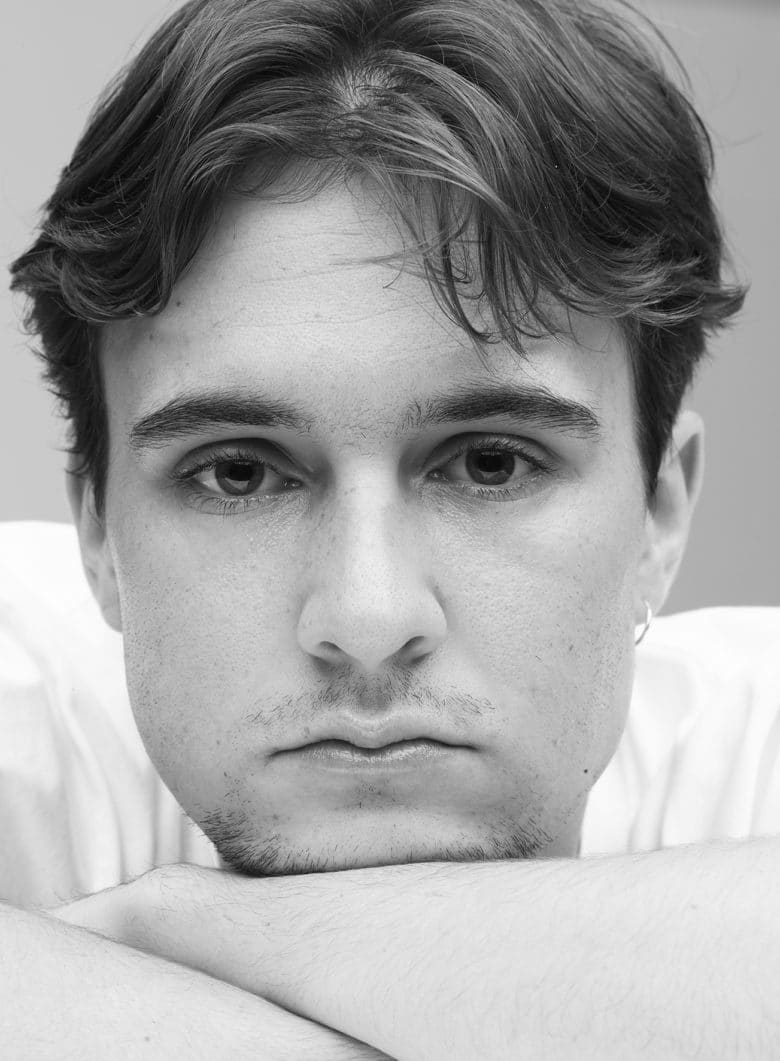 His most recent release, IDONTBELIEVEIT!!, is a translation of Wetha’s eclectic musical influences into his own work; a grungy, big and bold take on falling in love that taps into our inner-emotions, all wrapped up in upbeat production.

His early tracks as a solo artist and his sold out headline show in mid-November have just been the start for Wetha, now he’s eager to continue exploring wherever his music wants to take him. But, he says, as long as he’s able to keep on making music, collaborating with friends and performing, he’ll always be successful in his eyes.

HUNGER sat down with Mac Wetha to discuss the obstacles of venturing into the solo world, how his early years in the NiNE8 Collective helped shape him as an artist, and what success means to him.

What role has NiNE8 played in helping you to find your feet as an artist and grow around other musicians who are also blossoming in the industry?

I suppose just general support; always being hugely supportive of me singing and getting more in the forefront. Watching them do what they do, I definitely learnt a lot. Really and truly, I feel a bit like I’m in on this on my own, this solo stuff. And it’s the first time I’ve ever felt like that and I think that’s because it’s the first time I’ve ever had a first solo project. Maybe a lot of artists tend to feel like they’re on a boat, stranded in the sea. With NiNE8, and with friends and family and other collaborative peers, it makes me feel a lot more like I’ve got a handle on things.

In light of your collaborative work, what does your recent release of both IDONTBELIEVEIT!! and Make It Thru mean to you as an artist, then?

I’ve got complete control. Naturally, when you’re collaborating you settle on things. But with the solo stuff I can really sit down and have as much time as I want to think about it. I have been, traditionally, making the beats and engineering, and giving ideas and stuff like that, rather than actually writing what the song is about. There’s this thing that I kind of know what I want to make in my head, I just need to sit down and do it. Sometimes with collaboration, I feel like it might get muddled a little bit. But the collaboration work throughout my life has deeply impacted my solo stuff – all the stuff I’ve learnt and the ideas that have been fostered from learning from other people.

Why is now the right time for your solo endeavours? What made you want to go it alone?

Firstly, my band broke up, so there was this lack of an outlet for me to write as a singer and to be involved in songwriting in such a way that I’m going to be performing it with the band. And then when I used to play with them, I was quite an extreme frontman. I did a lot of crazy stuff and really enjoyed it – that had been cut out of my life and I had this hole; I needed to be on stage, to be looked at, to perform. I really wasn’t coming up with anything great for a long time, but I was really trying. It was weird, I was a singer in a band, I’d recorded with them many times, and then suddenly I’m in my own little studio and I know what to sing but I can’t really sing it. It was like starting anew.

Were there any standout performances or emerging artists when you were younger that pushed you and inspired you?

Lava (La Rue) took me – I still look back on this with such fondness – to this night called Steez, an open mic jazz night kind of thing. That’s where I first saw Puma Blue. I was so in awe of his performance and his band. I’d never really listened to much jazzy stuff or solely or funky, I mean I had, but not like how he was doing it. Watching him really inspired me to check out the music and bring elements of it into my production. I tried to start learning jazz guitar because the incorporation of this was so important, and that hugely impacted the beats I ended up making for Biig Piig.

Is your solo work the kind of music that you’ve always wanted to put out, or is there still a lot more you want to explore?

There’s always going to be more stuff I want to explore. Looking back on my first project, Make It Thru, I really love the project, but even this project I’m about to put out, I feel like it’s just a taste… I’m still trying to figure it out. I’m making music that means a lot to me, and I am putting everything into it. At the same time, I know I’m yet to explore loads of different ideas and get to certain places.

You’ve mentioned in the past that you don’t want to be pigeonholed as an artist – how will you make sure that doesn’t happen?

I guess you just keep people on their toes by just making whatever you want to make. That’s kind of what I’m trying – to just find this balance. But something needs to tie all this music together. Maybe it’s just the presence of my voice being there that ties it all together. And my production style, which is way more evident in this next project I’m about to put out than my first one. Again, I’m still learning. I’m still figuring it all out.

And what can you say about this next project?

It’s gonna be a little longer. I think it’s a lot more fun and takes itself less seriously. There are more songs I’ve collaborated with other writers on, and friends, which is cool. Otherwise, I want to keep it a secret…

Just as myself hopefully. I’m not massively into doing the social media stuff and all of that, and that is how you get yourself and your personality across. I hope people see me as what I am: just a guy, trying to make music. I think about that [question] a lot, but I don’t really know.

What’s your barometer for success as an artist?

I’m successful now. Not to blow my own horn… I’m already so happy with where I am. The fact I’m just making music with my friends and having fun and being able to perform, and people come to watch – that’s been my dream my whole life. So I’m successful now in my eyes.