“NSG is a lifestyle. It’s the way we live, and our level of success proves that,” says Papii Abz, one of the six members of the NSG collective. Occasionally the toil and effort of work produce real results to be celebrated, and in the case of NSG — the group consisting of Papii Abz, Dope, Mxjib, Mojo, Kruddz and OGD — they have reliably created their stage for all to view their musical forte since 2013,  and the results are evident.

The group are best known for not shying away from embracing their West African culture and identity in all forms, with credible accolades to validate this. Their breakout moment was in 2019 when their song ‘Options,’ featuring Tion Wayne, saw them grab their first top 20 on the UK charts. Since then, they’ve given us a long string of hits from ‘OT Bop’ to ‘Airplane Mode,’ which featured on Nines’ chart-topping album Crabs In a Bucket. 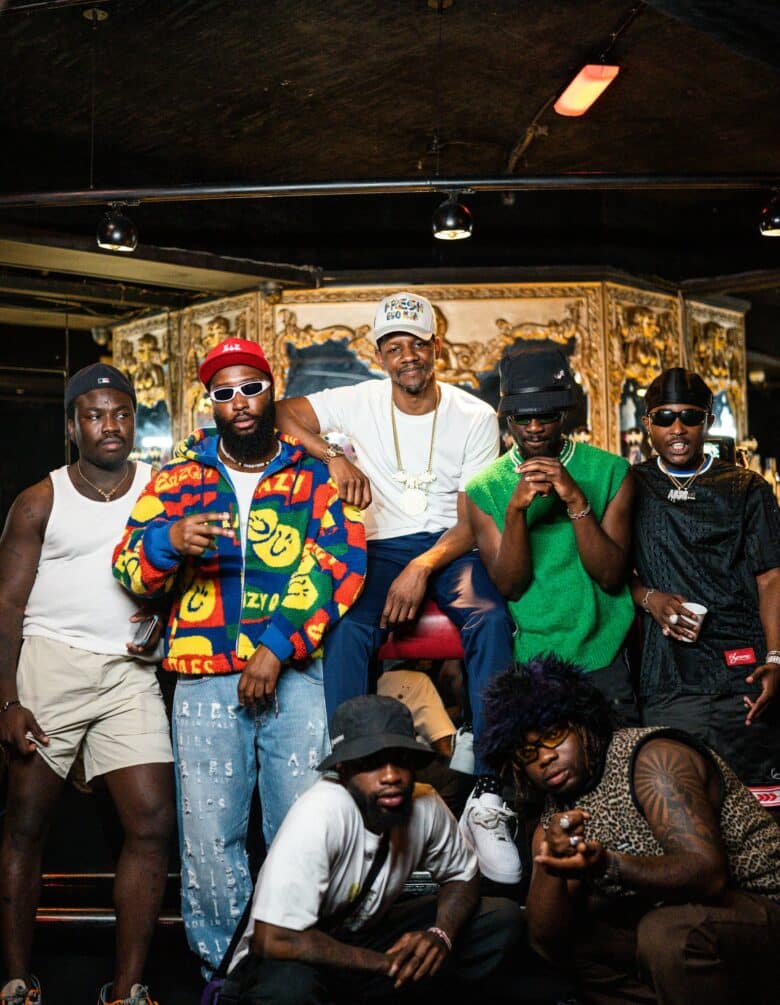 A couple of weeks ago, the group went viral on social media (with blogs and tweeters discussing their influence) after performing for the first time in Uganda at their headline show, NSG Block Party. “We are doing this independently; touring Africa and having our first show in Uganda is big,” says Mojo.

Sitting on The Rooftop of One Hundred Shoreditch Hotel in the same London borough of Hackney that raised them, the boys reminisce on their brotherhood. “Growing up in the same area and going to the same school – we played football together, did stuff together, went partying together, all that stuff,” Kruddz says. “I think that the foundation of it is our culture. The fact that we’re proud of our heritage, it was our similarities and cultures that brought us together.”

Chiming in, Papii Abz says: “The days when being African wasn’t cool, we represented regardless.” It was African melodies that knotted their alliance as a group together. Whether through the percussion rhythms of afrobeat, the amalgamation of African-infused melodic rap hooks found in afro swing or the fusions of sounds in and outside of the African continent, which is found in the afrofusion genre, the group find value in their companionship through the umbrella that their heritage and music provide. “It could be subconsciously or consciously, but our western African heritage has always played a part in our friendship, and it’s mostly showcased through music,” says Mojo.

We live in a world where individuality is hard to come by, with many artists adopting what it means to be mainstream. However, NSG is not spellbound to the status quo — with their very appearance deviating from the norm and going against the perceived notion of what physical attributes make up being a Black male. From Dope painting his fingernails black, Papii Abz having tribal marks on his face and cowrie shells in his hair, to Kruddz growing out his fingernails, NSG is painting a very different picture of what it looks like to be a young Black male. Their appearance is assertive, political, and distinctive from their peers. “Whether it’s down to our dressing or our tone of voice, just us using our cultural lingo – I feel like it makes us stand out and being a collective makes us stand out even more,” Papii Adzz comments.

Many people would label NSG on what their investigative ears think their sound is, but for NSG, they’re not that fussed about the labels. “You can label it whatever you want, but the foundation is African,” expresses Kruddz.

When your professional life is engrained in enjoyment, pleasure and desire, life can feel much more liberating, something not too often granted to people from deprived working-class areas, stripped of government resources, such as the environment where NSG were raised. But with the privilege and blessing of being able to enjoy the benefits of their career at their leisure, NSG has also overcome any hindering blocks that may obstruct their brotherhood. “We don’t necessarily get sick of each other. We have the same goals – our job is like a hobby and it’s fun. You don’t get tired of having fun, do you?” Majo asks confidently.

But what is clear from their friendship, as discussed at the restaurant, is that each of them brings their individuality into the collective, allowing them to sustain their unified strength. “Everyone delivers their uniqueness to the table, and everyone delivers their best because we’re brothers. We don’t compete with each other,” Papii Abz says. “What’s best for one of us is the best for all of us.”

With the group aiming to release a batch of follow-up singles before the release of their next upcoming album, Areaboys – NSG is sure to be cultivating a presence that people will look forward to hearing about. In the meantime, you can only speculate how far the group’s reach will take them this time. “Expect the unexpected,” concludes Mojo.