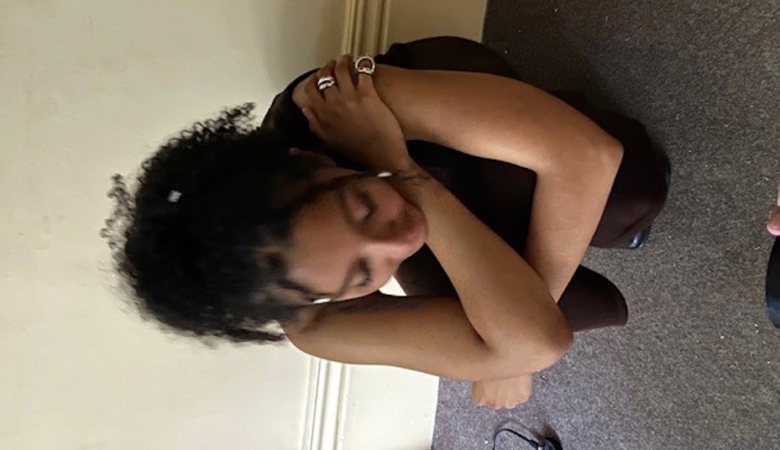 With over 130,000 TikTok followers and 2.1 million likes, PinkPantheress is TikTok’s latest breakout musician, standing out from the majority of her peers because she’s, well, talented. With her dulcet tones,  and stream-of-consciousness writing style (think: Courtney Barnett, with a sweet pop twist) songs like “Attracted To You”, “Passion” and “Break It Off” were crafted off the back of all-nighters in her university accommodation, only to grow into viral hits. Now the 20 year-old “new nostalgic” artist is poised to takeover, with over 50 million streams on Spotify and a collab with Goldlink already under her belt off the back of a handful of releases.

@hungermagazine: When did you start making music?

@pinkpantheress: a few moons ago when i was a wee bairn.

@hungermagazine: How would you describe your sound?

@hungermagazine: What’s your favourite song you’ve put out so far and what does it mean to you?

@pinkpantheress: sonically it would be “noticed I cried”, oscar scheller is amazing with his 808’s. In terms of meaning, probably “time with me”.

@hungermagazine: Your music draws on the 90s and 00s – as well as being musically inspired by these decades, are you influenced by them fashion-wise as well?

@pinkpantheress: i’d say yes for sure. for sure. off topic, but if i could curate a wardrobe it would be stevie nicks meets sharon stone in basic instinct.

@hungermagazine: Before your music started to take off on TikTok, were you much of a fan of the platform?

@pinkpantheress: a big one, it’s actually so funny, plus i love the fusion of everyone’s international humours it’s so interesting to be in one space and see what makes everyone laugh.

@pinkpantheress: one of these three, starting my first fan account on tumblr, making a vine or writing my instagram bio with lock hearts after all of my friends’ names and them removing these lock hearts when we fell out.

@hungermagazine: What are your most used emojis?

@pinkpantheress: 🤫 contrary to popular belief this one fits most texting situations perfectly.

@hungermagazine: You’ve switched to private mode on Spotify, what are you listening to?

@pinkpantheress: a fever you can’t sweat out by panic! at the disco or “let me hold you” by bow wow and omarion, both heavy rotations for the past year.

@hungermagazine: Do you use dating apps?

@pinkpantheress: i don’t, and because i don’t care to, respectfully. i’m an admirer of their services though.

@hungermagazine: Have you ever been blocked?

@pinkpantheress: yes i’m pretty sure i have, don’t know by who but there’s no way i’m not blocked by someone.

@pinkpantheress: if i told thee i’d have to kill thee.

@hungermagazine: And your most-used app?

@pinkpantheress: these apps called rusty lakes, look it up please and yes, pay for the full versions.

@pinkpantheress: i’m not sure and i don’t know how to check on my iphone but if i had to guess i’d guess 6hours but i’ll tell you for why, it’s cos of my most-used app, rusty lake

@hungermagazine: How long could you go without your phone?

@pinkpantheress: not long, i love the game rusty lake too much i don’t know if i mentioned that already but i do. i now realise it looks like i’ve been sponsored by rusty lake by the way but i haven’t i just really love the game.