Growing up in a world of inherited fame brings with it a unique vantage point. Yes, there are undeniable privileges, but what is often overlooked is a true sense of self. There is always a question mark that comes with hard work: was it you? Really you? Or was it because of who you are and who you come from?

Two young people well versed in this construct are Raff Law – the son of Jude Law and Sadie Frost – and Cora Corré, granddaughter of Vivienne Westwood and Malcolm McLaren. Law, 25, is one of those multitalented types. Model, musician and now actor. If you haven’t seen him on a billboard or in a magazine, then you may know him from 2021’s Twist, starring alongside Michael Caine. He’s also about to appear in Steven Spielberg and Tom Hanks’s upcoming miniseries Masters of the Air, from the team behind Band of Brothers and The Pacific.

Corré, 25, is also a model, as well as punk, fashion and lingerie royalty – her parents founded Agent Provocateur. She and Law have been friends since childhood, with a unique and sensitive understanding of each other’s situations, so we asked Corré to interview Law about finding himself, that latest Spielberg project and how his parents are his role models in different ways. 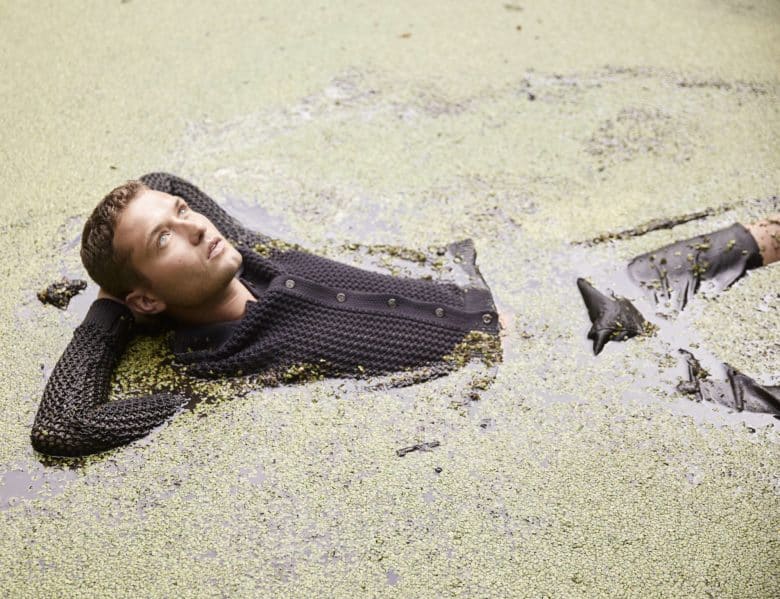 Raff wears cardigan by DEVEAUX from YOOX and trousers by PRADA.

Cora Corré: Hello Raff. I know you were filming for [Masters of the Air] for a lot of last year – what else have you been up to?

Raff Law: I finished filming it in December 2021, then I went and spent Christmas with my family. Having had such an amazing year on set, working with so many great actors of a similar age to me and learning from each other, I wanted to give myself some time in January to get back into the London rhythm. It was quite weird, because I’d been in an American accent for so long, I needed to give myself a month just to reset.

CC: You mentioned then that you spent a lot of time with actors of your age and then also took time out with your family. With that in mind, do you think you would say that your role models are formed through your day-to-day life and experiences?

RL: Definitely. I think “role model” is such an interesting label. Some of the people I worked with on Masters of the Air definitely became like role models, but I have all sorts of people who have played really important parts in my life at different times. My mum has always been a huge role model to me in how she treats people and her outlook on life… She’s very patient. My dad’s always been a huge role model, too. He’s like a best friend. We spent a lot of time just me and him when I was growing up – we’d go on all sorts of adventures. I think he really instilled imagination in me, which then made me want to tell stories and be able to create that human connection. 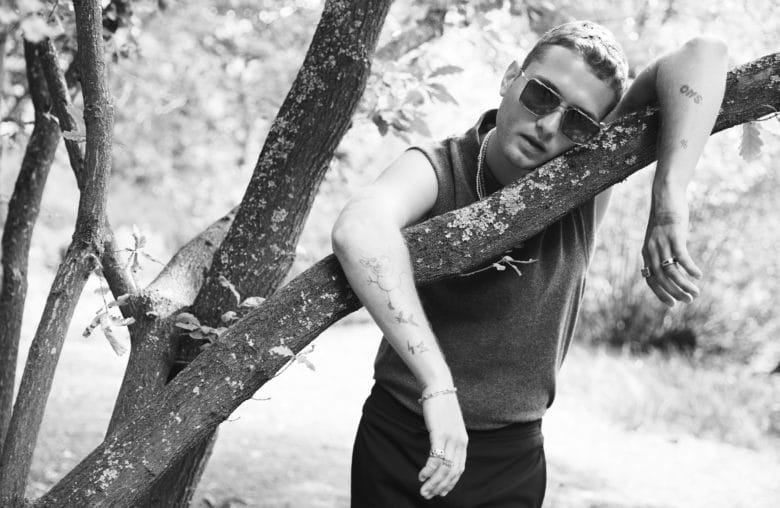 Raff wears Hera in Silver and Blue Crystal sunglasses by AKONI, top and trousers by SANDRO and his own necklaces, bracelet and rings.

CC: As we grew up together, you were the main part in every play at school. Is that a memory from your childhood that has always stuck with you?

RL: Yeah, there’s a few. Our school [Bedales, in Hampshire] had this amazing facility called the Olivier Theatre. And I think the first play I ever did – I was about five or six, you probably remember it – was Pinocchio. I was so excited. Another memory that stayed with me was when I played Long John Silver when I was 15. I’d read Treasure Island as a kid with my granddad, so I was in love with the story. I really wanted to be “in character”, so I shaved my head, pierced my ears and learnt to walk on a peg leg. We had a parrot as well, who came in with a parrot handler. We went all-out. I think that was the moment that I really believed in myself. I remember the feeling of the first night, with my parents and all my friends watching. It’s the same thing that happens when I go and see my friends perform – that excitement afterwards. When I’ve seen someone who I care about do something and smash it, I felt that energy. It’s easy to admit when you’ve made a mistake, or you screwed up, but it’s also really important to turn around and pat yourself on the back. That was when I realised that acting was something I really wanted to do and take seriously. 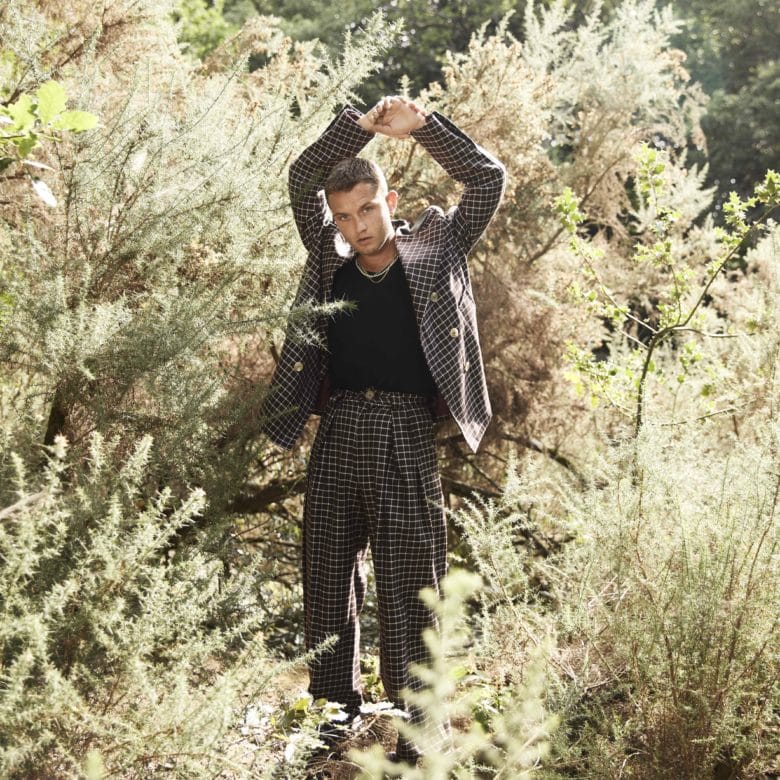 Raff wears jacket and trousers by SS DALEY, vest by NO21 and his own earring, necklaces, bracelet and rings.

CC: You spent a lot of time in that theatre at school, in rock shows. Is music something you see in your vision for the future?

RL: The past few years have been a real learning curve for me in so many ways. I’ve always been someone who throws myself in 100 per cent when I’m really passionate about something. But then I would be the first to admit that sometimes I’ll shy away from things that I’m not so good at, or think that I have to work really hard to get. Music is something I’ve always done, almost as therapy. I love writing. But having put so much time into music originally, I really missed auditioning and acting. That made me realise how passionate I am to act, really do the work and audition, and try my best to see how far I can push it. Music is slightly different. I see it more as a hobby, something that started in my bedroom or at home. My band, Outer Stella Overdrive, aren’t together any more, but in the past it was a really great time. You can’t hold onto loads of dreams at once, you have to make a decision, and acting is where I want to be. 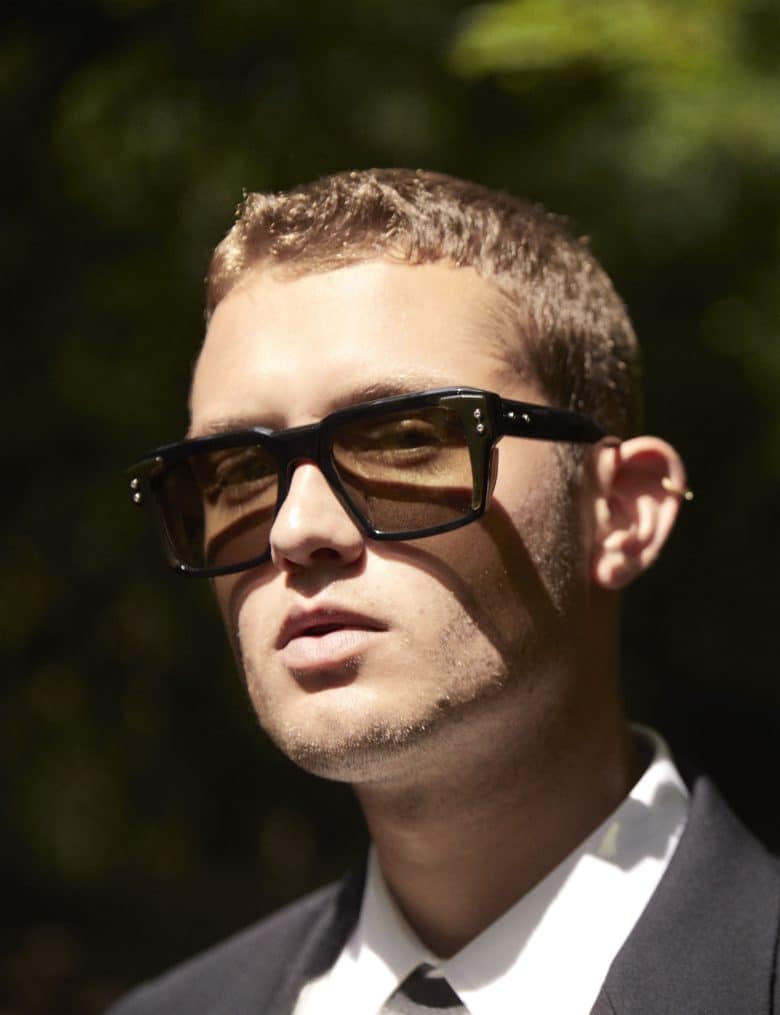 Raff wears Hercules in Black Crystal sunglasses by AKONI, jacket, shirt and tie by DUNHILL and his own earring.

CC: You talk about music more as a somewhat therapeutic love of yours. We had two years going in and out of lockdown – did it make you lose focus? Or is it something that has driven you to work harder and find yourself?

RL: No, it was a really weird one for me. I went into lockdown coming out of my first film, Twist. I felt so inspired, like this was the start of my life. Having finished my first feature film and being really excited by the experience I’d had, it felt like that plug had been pulled all of a sudden. Now, looking back, I’m glad that I was able to spend some more time with my family. But it took me a while to say, “OK, I can’t just sit around and wait for this lockdown to finish, there are things to do.”

I was writing a lot of music because there weren’t any auditions. I wrote and recorded an album, which I haven’t put out, and I’m not sure I will. Whether people hear them or not, those songs really helped me get through that time. Lockdown made me realise how grateful I am for the opportunities I’ve had, but also how driven I am, to show people what I’m capable of and share my opinions. I’ve got a lot to say. In the past I felt like I was slightly defined by my family. And now I want to break away from that and focus on myself. 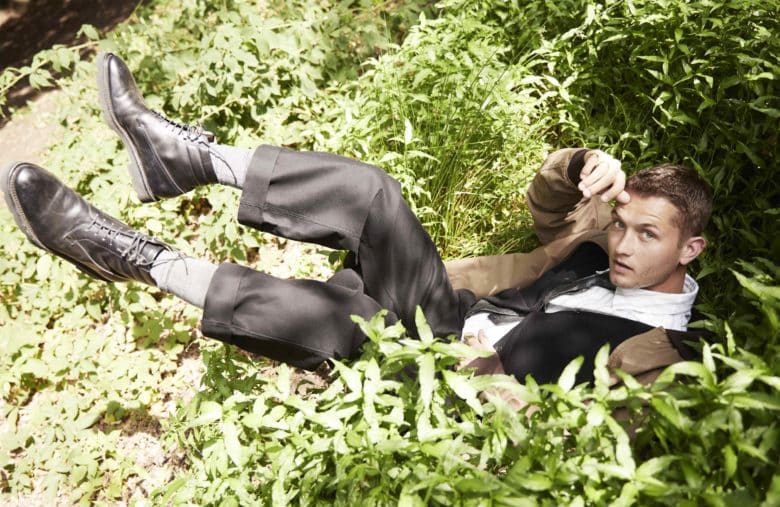 Raff wears coat, jacket, shirt, tie and trousers by MARGARET HOWELL, boots by JOHN LOBB, socks by FALKE and his own earring and rings.

CC: You’re such a loving person and you’re so proud of all your friends’ achievements – what’s your proudest achievement so far and why?

RL: My proudest achievement so far is definitely the [Masters of the Air] series. Twist was also a really great moment for me, but getting this latest role was so different. I remember when my agent called me – you know me, I’m never lost for words, but I literally couldn’t breathe. I rang my dad and I was just over the moon, because I’d done so many auditions. It felt like it was the perfect timing. The whole thing was amazing – going into the training bootcamp and putting in the hours, perfecting the accent… I found the family of the guy I’m playing on Facebook and we were messaging back and forth. I learnt so much about him and I fell in love with him. He’s a hero. I’m so excited to be able to share it with people.

CC: We touched on this earlier, but everyone is always their worst critic. It’s not often that people give themselves a pat on the back for their good work. Throughout all of the interviews, is there ever a question that you’ve always wanted to be asked?

RL: For me, I felt like in the past, I got asked a lot of similar questions. I understand why that is. But, now in my life, I’m really ready for people to start hearing my voice, if they want to hear it. I feel like I’ve got a lot of clarity when it comes to who I am as a person. Like you say, I do care a lot about other people, and I want to make them feel comfortable and good. But I think there’s also a point where you’ve got to start thinking about yourself. And, moving forward, I feel like I’m ready to to show a bit more. 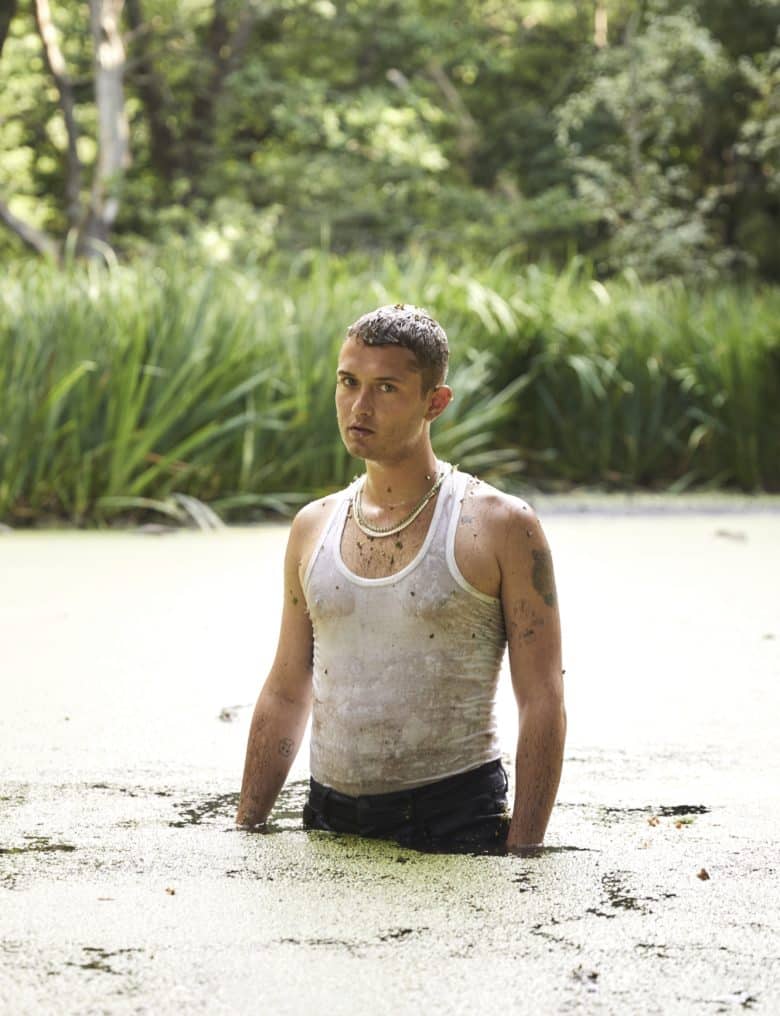 Raff wears vest by SUNSPEL, trousers by GUCCI and his own earring and necklaces.

CC: Completely. So leading on from that, what’s next for you?

RL: I’m excited for the next few years. In the past six months especially I’ve been going through a chapter in my life where I’ve become very interested in healing and working on myself. I’ve been seeing a shaman. It’s really good to be dedicated to work, but I also think there’s a fine line between being dedicated and a bit obsessed. You need to look after yourself and find that balance. And now I’m just really eager to land another role. I’m ready for it.