Stefflon Don has been one of the UK’s most successful artists ever since she burst onto the scene with her 2016 mixtape Real Ting. The MOBO award winner made history on Sunday as she performed at the first-ever UEFA Women’s Euro final show, in collaboration with Pepsi MAX, as the lionesses won their first-ever major women’s championship.

HUNGER caught up with the Birmingham native ahead of her groundbreaking performance to discuss what the success of women’s football means to her, as well as her upcoming album, and her relationship with the late Punjabi rapper, Sidhu Moose Wala. 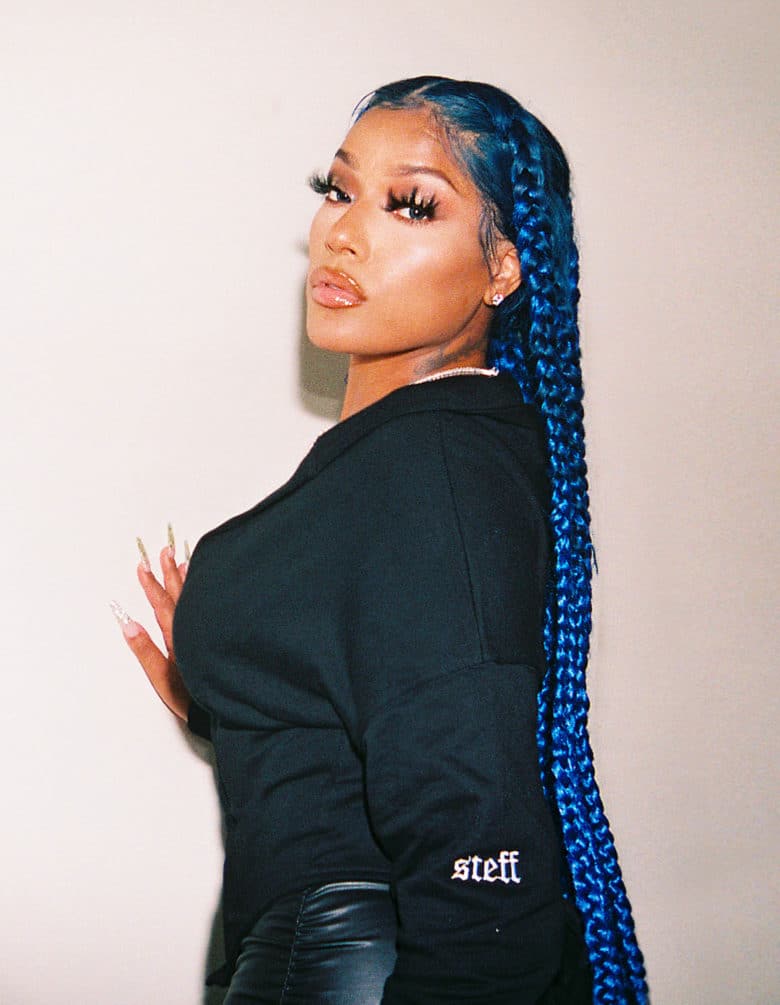 How does it feel knowing you’ll be performing at the first-ever Women’s Euro final show in collaboration with Pepsi MAX? Are there any nerves at all and what can we expect from you?

I’m not nervous. I actually never get nervous before I go on. I’m always excited to perform. First of all, we’re in Wembley in a sold-out stadium. I’m going to be on one of the best stages, which is the Pepsi MAX stage, which is incredible. Alongside two amazing women. I’m just raring to go and I can’t wait for Sunday. We’ll be bringing it home.

Is women’s football something you’re passionate about? Are you pleased to see it getting the mainstream recognition it deserves?

Yeah, it’s really amazing. I feel like young girls growing up can now look at this as even more of a real recognised sport, because I felt that before we had to fight to be really recognised and be on a level with the guys. I feel like it’s definitely getting there. Now there could be more young girls deciding to choose football as a real profession because there’s a lot more people taking it seriously, which should have been done a while ago.

I think a lot of UK artists struggle to break into the US and international markets. But you kinda seem to be one of the exceptions. How did you make that possible for yourself?

Well, coming up in the beginning, I feel like my sound was and is very international. I come from a Jamaican background with Jamaican parents. Jamaican music travels very far outside of the UK. I feel like with the UK sound before it was very niche unless you’re a fan of grime but the sound has changed a lot since then. When I go to different countries, I now hear a lot of UK rappers, more than I used to before, I think it’s a good time. I think TikTok has had a big part to play in that.

What are some of the differences you see now compared to when you were coming up? Do you think the UK is a lot more accepting of female hip-hop artists now?

I feel like it’s evolved a lot since grime but a lot of rappers still have that grime element. The whole grime thing stems from Jamaican culture anyway, you know like the clashes and the words they use. I feel like they’ve just now incorporated that in a little bit of a slowed-down version, a little bit more rhythm and it’s more relaxed. I feel like they’ve intertwined it all and now it’s just one big melting pot of amazingness. I just feel like everyone’s now getting the recognition they deserve. I feel like the UK as a whole, the artistry, to me, is a 10. When I listen to a lot of other countries’ music, I feel like a lot of people are now heavily influenced by the UK market for sure. You see it with Drake, he’s hopping on drill and it’s all meshing together. I’m super excited and super proud of all the people coming up and really doing their thing.

You recently shared tributes for Sidhu Moose Wala online who sadly passed away, what relationship did you have with him and what impact did he leave on you?

Rest in peace to the legend Sidhu. Our relationship came about from Mist. He had a song he previewed online, he had like an Indian sample and when he dropped a few bars everyone just went crazy. I remember hearing it and thinking ‘this song is dope, like, what is this? do I need to be on this?’ He said ‘yeah you need to be on this and I’ve got this amazing Indian artist on there,’ which was Sidhu Moose Wala. That’s the first time I’d heard of him. Steel Banglez was the guy behind it all. We then shot the music video for the song, which was amazing and super successful. Then he came over here and we performed at Wembley Arena. We also did other songs so he’s about to be on my album as well. He’s such a super cool guy. I think we’ve done three songs since then and he’s just an amazing person.

I know you’ve got your debut album coming out later this year, what can we expect from that and how does it differ from your previous projects?

Yeah, it’s called Island 54. This is gonna be my first album, all the other stuff that I made like Secure and Real Ting, were just mixtapes. So, with this project, I’m taking it a lot more seriously. I just spent more time on it and thought what do I really love? And what do my family and friends really love the most? We’ve been working on this for a good two years so I can’t wait to let it out to the world. It’s just a vibe.