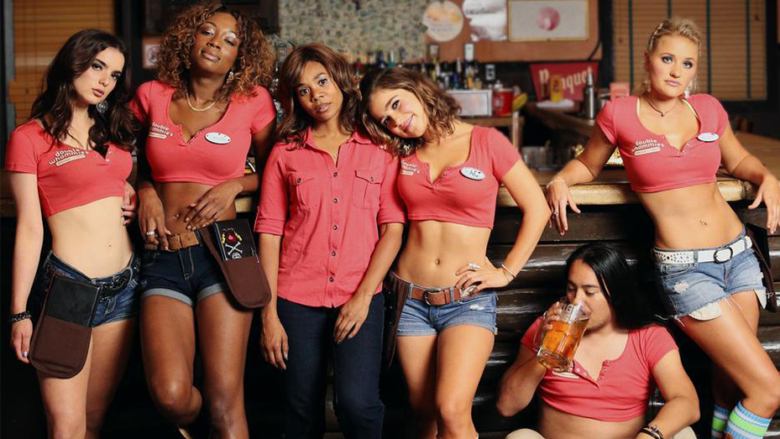 Early in 2017, Haley Lu Richardson headed to a breastaurant, and she left with a new job. Taking on the role of Maci in Andrew Bujalski’s Support the Girls, Haley entered a world so unlike her own, but filled with as much love. “It’s a family place, which means a lot of families come here, and it also means that we’re all family,” Regina Hall’s character Lisa tells trainee employees, and starts the film off as it means to go on. A subject so easily judged, so easily satirized, the Double Whammies establishment may represent a “weird and uniquely American product” to Bujalski, but it also is the ideal grounds for capturing a unique fragment of women’s lives. From maneuvering workplace sexual harassment (which has an actual zero tolerance policy in Lisa’s eatery, unlike most offices, filmsets or studios around the world); to developing deep friendships; to balancing work, family and personal lives; the film follows a very real story, a moving snippet into what it means and is to be a woman. And who better to take on the task than the full of life, compassion and talent 24-year-old actor Haley Lu Richardson.

Following the indie appraisal of Kogonada’s Columbus, and the worldwide success of Five Feet Apart, Haley has navigated the worlds of arthouse and Hollywood with grace and skill, and there’s a lot more to come yet. We caught up with her to celebrate the release of Support the Girls, now out for everyone to access on digital platforms, and talk about how the film gave her a cathartic awakening, and hope’s it will give you one too…

How did you become involved in Support the Girls, what drew you to the film?

First off, I just loved the style of Andrew’s writing, but there were a few particular angles to the story that drew me to it. There’s the exploration of that very specific female experience: although each woman in the restaurant has a different experience, they’re all connected with this underlying sense of being a woman. Scene wise, specifically, I really wanted to do that final screaming scene. When I read that I was totally sold on wanting to do it: I just got so excited imagining acting that and feeling that cathartic energy. Playing Maci, my character, was so exciting too: I’ve been able to play a role like her before. It was scary, because it was such a character role, but I was really intrigued by the idea of playing someone so new to me.

Did you relate to Maci at all? Do you have to find a way to relate to your characters?

Yeah, I feel like I’ve got to kind of relate to any character I’m going to play on some level if I want to figure them out. Even an evil person, or a person the complete opposite of me, I have to try and find out a way to connect me and that person. Maci could’ve been me, honestly, in another life if I hadn’t grown up where I grew up, if I hadn’t become a dancer and an actor. Specifically, I connected the moments that I feel when I’m really positive, even in really tough times, and when I’m like really bubbly and kind of obnoxiously energetic – which I am a lot, you can ask my friends – (laughs). But I connected that feeling and that energy that I have in me, to turn that into who Maci is a lot of the time.

Where did you draw inspiration from when developing Maci?

Sometimes when I read a character, I picture someone that I know specifically, but other times I’m just creating it out of my mind. For Maci there were a lot of inspirations that I drew from when I first read it: it said in the script that she had a specific accent, and it was obvious in the way it was written that she had more of a heavier, sort of southern accent than any of the other girls. I had just finished watching a season of The Bachelor, and there was this girl on it named Raven, she was from Arkansas and I was absolutely obsessed with her voice and her accent. When I was reading the script, I was also watching the show, and I was automatically merging ‘Maci’’s voice with hers. It helped me to figure out how to talk like her: I just watched a bunch of The Bachelor and interviews of her. So, yeah, I’m a really serious actor right now, exposing all of my very deep and artistic inspirations… (laughs) But also when also Dylan [Gelula] and I were in Texas before we started filming, we went and shadowed at a Twin Peaks – which is the same restaurant type of idea [as Double Whammies]. We put on the uniform, had our boobs taped up and everything. (laughs) It was honestly extremely fun: I got to see and experience what it’s like on the day to day. To understand what it’s like to have people that come there who have this expectation of who you are, and what they need from you. It was definitely interesting living and actually feeling that dynamic in real life, before we got into all of it.

How did you find creating this film during the current socio-political climate in Hollywood? Did it feel like a positive time to be creating?

It was interesting because I really don’t think Andrew [Bujalski] set out with the goal of making a movie with an intense agenda: it was just exploring a day in the life of this very specific workplace. I really like when stories are so specific because then they start feeling extremely real. It’s easy to act in them, to make them feel lived in and actually make someone feel like they are watching someone’s story, as opposed to watching actors read lines. What these women go through, everything that happens in that one day for them and how they’re changed by that, it’s powerful: it almost felt like a documentary when I watched the movie afterwards, even for me.

Definitely, that’s Andrew’s realm isn’t it – stories from the everyday lives of all types of people.

For sure! The movie was very every day. The character traits of Regina’s character, Lisa, and all these girls could be perceived from the outside as like “Oh wow, a bunch of ditsy girls working at a restaurant”. But then you see into that world and see what their experiences are like, how smart they have to be, how they’ve learnt to be able to succeed in that environment and stay sane. It’s really powerful, that kind of everyday life that a lot of people wouldn’t really think about or try to empathise with, now has its own movie.

What do you feel like you learnt from making Support the Girls?

I learnt a lot, I learn a lot from everything I do, acting is always really a learning experience. I didn’t go to college, but I feel like I have learned so much from acting in the last few years… Personally, being able to play a character I was scared by: I had to be an open book, I had to wear a costume which looked really intimidating for me, I had to commit to the role. Knowing that I could do that, that I could just let go and have fun with it, was honestly a really personal accomplishment for me. I was like “oh wow, I can challenge myself and get to the other side somehow”, so that was cool. Working with Regina and being around all the different personalities of these incredible women that this movie brought together, I learnt from them and we leant on each other through the trials of an independent film. I left feeling stronger, it just felt so good.

I think you can tell that from the film, it feels very cathartic as a film.

Yeah, I was definitely happy with the experience. We filmed that final scene on the room last, and so acting that was extremely cathartic. It honestly felt as good as it looks, as good as it feels to watch. It was so cleansing, for me as a person and as a character. I recommend everyone does that at some point in their life, go to the beach or a bridge or something and just scream.

What I really wanted to ask, if the audience could take away one message from Support the Girls what would you want it to be?

I think any movie that makes you feel some sort of empathy, or some sort of connection to people who you wouldn’t normally connect with, is powerful. What we were talking about earlier applies, because a lot of people judge a book by a cover, they judge what these women in this workplace would be like, or what their sole purpose is in the world, you know what I mean? When we were in the Twin Peaks restaurant, Dylan and I were talking to all of the girls that worked there and some of them are paying their way through law school, or some of the women have kids and are supporting the family with all their tips. To be able to have that resilience and strength to go and do something that isn’t necessarily what you want to do with your life but something you can make a lot of money with and you can also be in a safe protective environment, its not like there, there are very strict rules and laws that these restaurants stick to, so they are safe to a certain extent. Maybe just being that kind of workplace, and seeing those women from a different perspective and more kind of into their lives and what they deal with and go through.

What films do you feel like have shaped you as an actress or as a person over your life?

Wow, that’s an interesting question because it’s not like what your favourite movies are, it’s what do I feel like has changed me… I watched Mister Rodgers a lot when I was little, so that probably shaped me a lot as a person. My favourite movie recently, which honestly really affected me, was Inside Out, a Pixar movie. It was such a beautiful message, and such a good reminder that you need to let yourself experience all the feelings and addresses mental health for children so well. I wish I had seen that movie 15 years ago. I’ve gotten into a lot more meaningful movies recently, but I don’t know if they’ve shaped my life in the same way, yet.

Where do you feel Support The Girls has lead you to, what’s next for you?

Well I’ve done a couple of things since then as we filmed it in 2017; I’ve just had this movie come out that is completely different from Support The Girls called Five Feel Apart. I also worked on this movie Colombus, which was maybe my favourite thing I’ve ever done, because mostly I got to work with the South Korean filmmaker Kogonada: he wrote, directed and edited it, and I got to be in his next film too which we just finished filming in New York. I’m really excited about that.