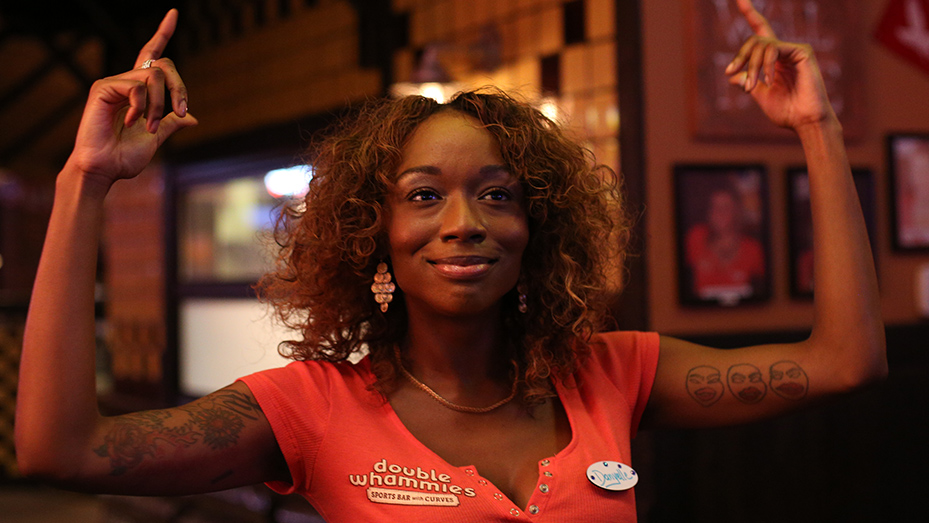 When you’re an independent, female rapper from New York, it’s a very exciting and wondrous prospect to navigate. You’re a legacy to some of the greats in the game. With an industry, still  so typically male centric, in 2019, a female revival is taking heed- in a major way at that. So when Shayna McHayle, commonly known as Junglepussy decided to step away (only for a split second) from performing to crowds near and far to try her hand at acting, it came as a welcomed surprise to herself, but mainly her fans.

Straight off of the Australian MainStage, Shayna returns to her home in New York, with a purpose. Rest and replenishment on the agenda. Basking in the New York heat, bare bodied and determined to revisit solitude, which, unfortunately isn’t long lasting, but, with a solid rotation of television shows that she’s left on the burner as her  career seeks new heights.

Support the Girls is a tender tale chronicling the day-to-day workings of a female- run Hooters-style sports bar. Five scantily clad women navigating woking life emboldened by misogyny and sexualization. Without the help of Lisa (Regina Hall), the General Manager, wrangling punters and staff, the bar would cease to remain.

Danyelle is headstrong: an unofficial, born-activist with sass and an unwavering sense of nonchalance. A single, black mother battling, race, gender and society’s draconian example of the family. Worlds apart, but not unfamiliar from the women that exist in Shayna’s life. Her friends, friend’s mothers, her mother’s friends, her mother. As the child of a single mother she was prepared to of the weight and responsibility in portraying a role that she so deeply identifies with. A role that cannot and should not be overlooked or dismissed. A debut role that was handled with care, portrayed with tact and excelled. 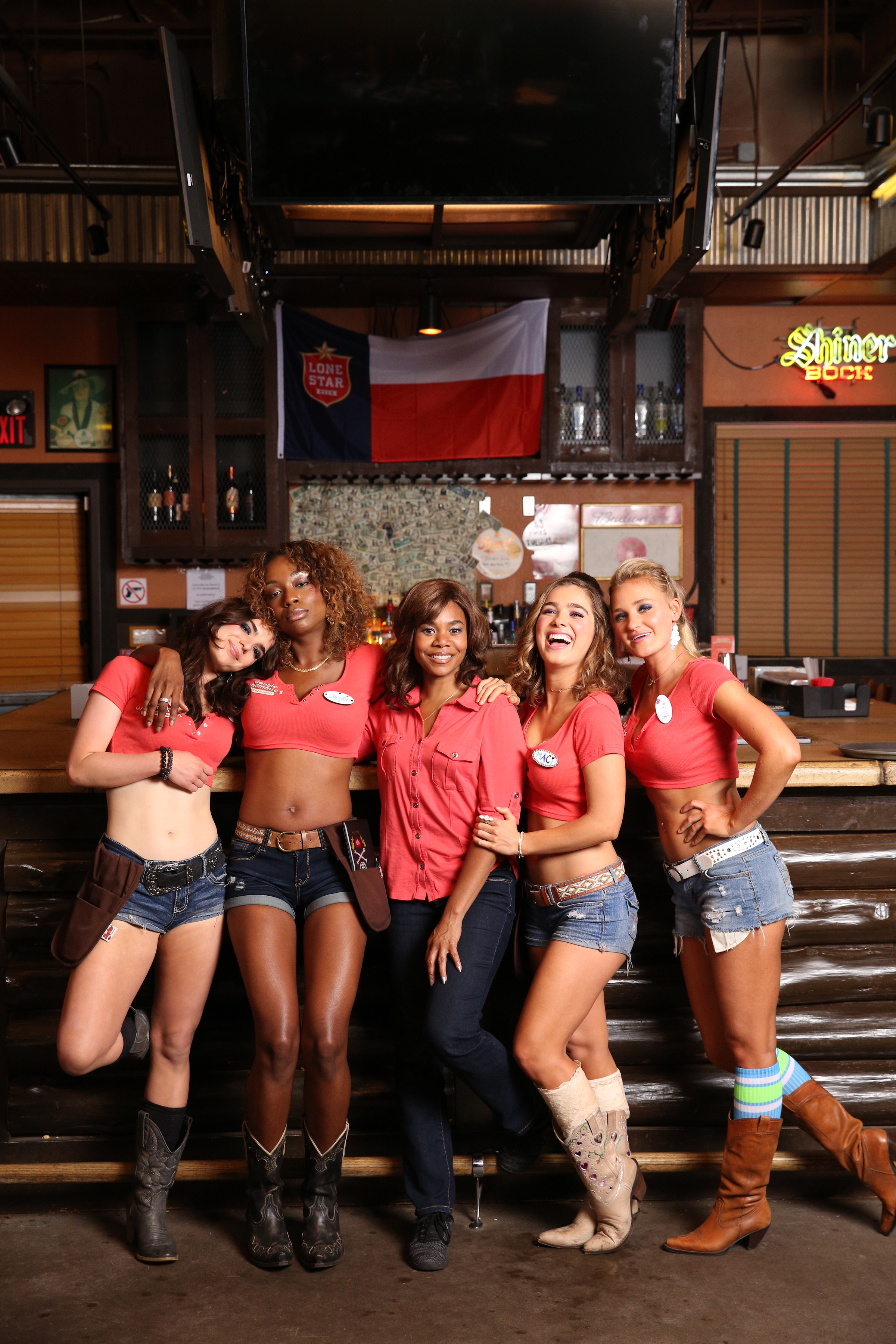 What was it like working alongside Regina [Hall] one of the biggest names in the industry?

Oh gosh, working with her is a dream, because I grew up watching her in so many classics; Scary Movie, Paid in Full and the stuff she does now which is super legendary like, Think Like A Man, Black Monday and Girls Trip. Just thinking about her entire legacy and at some point we’ve crossed paths an created something together that just inspires me to keep going because I’m sure when she was starting out in her career, who would have known, she probably didn’t even know herself that she was going to act forever but she’s doing really remarkable work and inspiring all of us.

There’s a black renaissance happening at the moment in television especially, but also in film. What characters do you admire today? You’ve mentioned the ways in which Moesha informed your childhood, but who do you see yourself most in today? As a grown woman, coming into your own.

Now, after growing up, all of these awesome women and characters who’ve come before, it’s me! We are seeing and noticing that we are all human and we make mistakes and nobody really knows the answers. We’re all winging it. None of it matters or means anything and I’m not trying to sound jaded or anything but there’s no longer a need to look up at someone. It’s more about realizing the power that we have within. It’s like,” damn” I want to, but you’ll freaking die… sooner. So, for me, there’s no one to really look up to besides my mum and all her awesomeness. How sh’e managed to that mother thing is just… but other than tat, no one. I don’t really see myself in any particular characters today. I am my own role model and in the current climate, just being a woman and seeing other women like me is what drives me.

Support the Girls is an all-female cast, who do you look to for support?

Definitely my mum and my sister. They’re my core, they’re my family. They’re just literally the ones who are there if something really goes down; it’s them who will be there for me no one else.

It’s varied from person to person. My favorite type of support is unconditional. Very little questions asked. No questions asked, but very little if so. A whole lot of lot. It doesn’t even need to be a lot of understanding; let’s just do it. I’m down. Just being down for that person publicly. I believe it should be publicly and it doesn’t have to hide or be undercover support. A lot of people don’t feel comfortable supporting things publicly. So i guess, it just varies, it doesn’t mean that it’s of any less value, but, I feel that true support, is no holds barred. True support is open and doesn’t care about terrible people with bad taste.

Was there a time where you felt that your support had greatly impacted someone else?

Everyday on the internet. I respond to all of my supporters. They’ll message me to tell me how much I’ve helped them and i’ll be like I’m just saying thank you, but I feel like people are always impacted it just depends on the scale. I feel like my music has impacted people, my journey, doing this independently without a label, without a manager, so i feel like that has definitely impacted a lot of young people- a lot of ;people who don’t want to take the conventional route.

You have a very diverse fanbase and I’m sure there must be a sense of pressure in representing them all?

I always feel misunderstood. I feel like when I started, especially at the beginning, I felt like black girls wouldn’t relate to me, but, then I started seeing different kinds of people. People who resonate with my experiences and that opened my heart and my mind to just look beyond and realize that you may think that people don’t understand you but what about the people who nobody else understands. You are and can be, a voice for those too. I love that because I feel like that makes sense to me. I may not feel understood, but so do a lot of people. That’s one thing that you’ll have in common.

"I just need to spread and be free…"

What should people take away from support the girls and your character Danyelle?

Well I come from that [single motherhood], but aside from the motherhood, like, many women can relate to Danyelle because we’re often, at our jobs, for survival we are accountable to ourselves, but importantly to others. We always have someone to take care of and be responsible for. So don’t let your workplace silence you. You have to be a good person and speak up.

Is that emblematic of the your stance on the political climate in the US at the moment?

What’s next? Are you going straight back into music or are you continuing auditioning?

So what’s on your guide right now? What are you watching?

POSE! Like everybody needs to watch Pose. We need to represent human numbers and they need to show that this show deserves as much budget and promo as every other show. So that’s the show that I really love to watch legally and consistently, but the other shows, you know, a bunch of web series on Youtube… I love watching all my JPTV that’s unreleased, that will be released soon.

JPTV deserves a half hour every week.

Right! Everybody needs to tell the networks. I’ll get there. JPTV is expanding; it’s just there and I just need to get these jokes out of me before I die.

In the vain of things to do before you die. What things would you like to achieve before we all leave this place?

I want to do like 3/4 more albums; I want JPTV to be just like a never ending network for all of you… every little part of me and more… like after I put my voice out there. I want to then allow other people’s stories, optimize voices to be magnified on this platform. So, I’m basically… it’s kind of like Oprah. I’m trying to have a platform for more perspectives because, oh my gosh, it’s basically what life has been about: storytelling. People telling their stories through music and a bunch of different things that have very much moulded our minds. Now I’m flicking and unlearning everything and I’m like, “oh Hell no, the is not how it’s supposed to be” so yeah, more storytelling.

Support the Girls is out now.