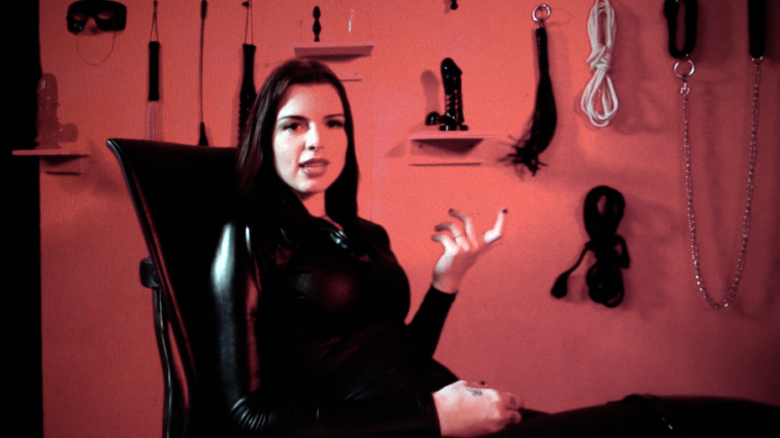 Speaking, fittingly, over webcam, director Ben Hozie admits that his leading character has had something of a polarising effect thus far; “Half of the people I show the film to say ‘he’s so repulsive. I wanted to get behind this movie but I can’t stand this guy.’” Yet Jack was never going to be a golden boy. Dialoguing with the shift in consciousness embodied by film noir’s post-war ennui, Hozie’s lead was always intended to represent the nihilistic turn – embodied by incels, conspiracy theorists and trolls – that men have taken in the internet age. “Jack is sad, lonely, alienated, perverted, morally ambiguous,” Hozie says. “To me, he’s actually a stand-in for so many people in my generation. A very online generation.” 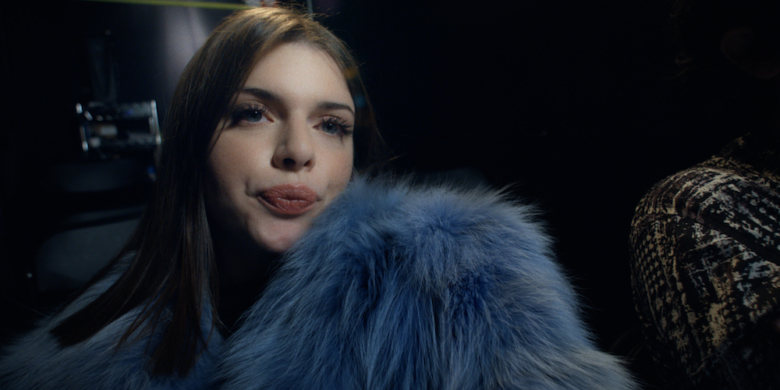 Hozie’s message on the descent of man via Facebook rings loud and clear as we watch Jack masturbate furiously and shove cheap, unseasoned noodles into his face, wearing the same dirty shirt for the film’s entirety. PVT Chat seems to revel in its male protagonist’s debasement, making it easy to see why Jack has provoked such a visceral reaction in some viewers – but what about the rest of the audience? “There’s always a weird swathe of people, even including straight women, who are like ‘I really relate to Jack. I am Jack,’” Hozie explains; “It’s easy to relate to a romantic fixation, I think everyone’s experienced that before.” Peter Vack, who plays Jack, sees his character’s romantic tendencies, and their ultimate futility,  as both his spiritual driving force and fatal flaw. “Even if Jack has a relatively nihilistic world view I think he is on some level just a hopeless romantic,” Vack adds. “At times he thinks he’s living a classic love story, even if the irony for the audience is that no, he’s not.”

Seeing through Jack’s eyes, we can also relate to his sexual infatuation with Scarlett, even if we don’t share his masochistic tendencies. Aloof, unattainable and dressed in a full leather catsuit, she’s framed as an irresistibly modern femme fatale. While she’s ostensibly in control, literally commanding Jack as her sub, Hozie is careful not to claim that scenes like these redress gendered power dynamics on screen. “Just being completely frank, I am a male director and I was the cameraperson as well,”  Hozie explains. “Any time I have the camera on my shoulder and I’m looking at Julia, it literally is the male gaze.” But by leaning into that male gaze, we’re also gaining some insight into Scarlett’s professional alter-ego. “Initially, Scarlett’s a total male fantasy but her character created that fantasy. That’s what she has to do as a sex worker,” he clarifies. 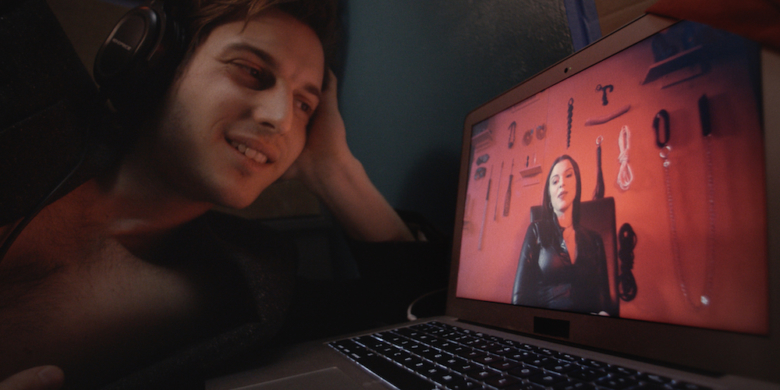 This illusion is disrupted when the film’s point of view roughly swings from Jack’s to Scarlett’s halfway through. “The rug gets pulled out from under the audience and they realise that Scarlett is a person who has problems of her own, choices of her own,” Hozie explains. Here, we learn that Scarlett is exactly as one might expect: not a one-dimensional fantasy but a real person, with the lacklustre long-term boyfriend and financial pressures that come with the territory. In this regard, by showing the perspectives of both client and camgirl, PVT Chat marks itself out from predecessors such as Isa Mazzei’s CAM and Numa Perrier’s Jezebel, which both aim to demystify and destigmatise online sex work.

Indeed while PVT Chat is certainly sex-positive – Hozie references Carol Siegel’s Sex Radical Cinema, admitting that one of his aims for the film was to “push the language about what sex can be in a film”  – it’s not clear whether it’s as committed to a sex-worker-positive stance as its predecessors. While Fox’s stint as a dominatrix factored into the casting decisions and she improvised and drew on some of her own experience for the role, the film is silent when it comes to issues that really do affect sex workers.  Namely, with so many women in Scarlett’s line of work experiencing stalking and harassment, it seems odd that the film places us within Jack’s point of view, tacitly leading us to empathise with his behaviour, as he does just that to Scarlett – even if she does (rightfully or wrongly) get her revenge later in the film. 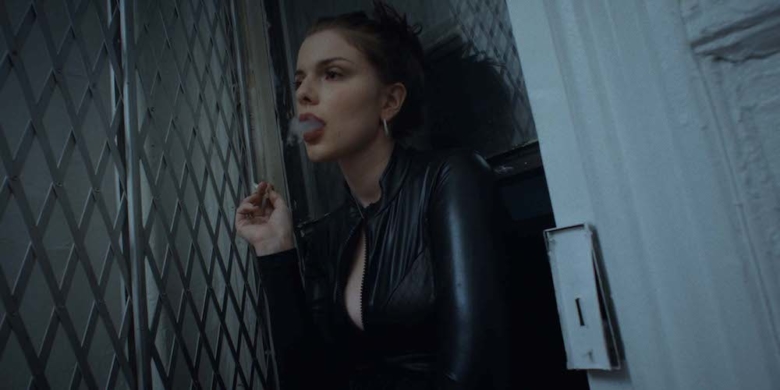 “There's something utopian about the internet, it allows you to find your people”

For Hozie, however, the film and this scene, in particular, shouldn’t be taken too literally; “I was thinking metaphorically. The idea of Jack following Scarlett isn’t too different to obsessively refreshing someone’s social media profile.” And it’s within this slippage between “real” and online where the film finds its thematic stronghold, with Hozie emphasising the parallels between Jack’s compulsive, gambling obsessed personality and our wider, social media-hooked society. “When someone likes your post, it triggers almost like the feeling of getting a 21 in blackjack,” Hozie explains. “Something about the gambling rush feels so relevant to life online right now.”

It’s ironic, then, that in this digital atmosphere of instant gratification, addiction and ephemeral pleasure, where both Jack and Scarlett lie about who they are, that eventually a genuine connection – evidenced in a tender final scene in a motel – is formed between the two. While it’s the detachment from reality afforded by the internet that leads to the characters’ more reckless decisions, having fantasy at their fingertips allows for a loosening of social scripts. As Hozie puts it; “There’s something utopian about the internet, it allows you to find your people.”  Indeed, it’s thanks to the digital world where Jack has enough distance from the disappointments of his real-life to shrug off his boundaries, open up and find some sliver of happiness. Or, as Vack describes; “It probably isn’t happily ever after but it’s two alienated people who do find some solace in one another,”

PVT Chat is available to stream from today (12 February)