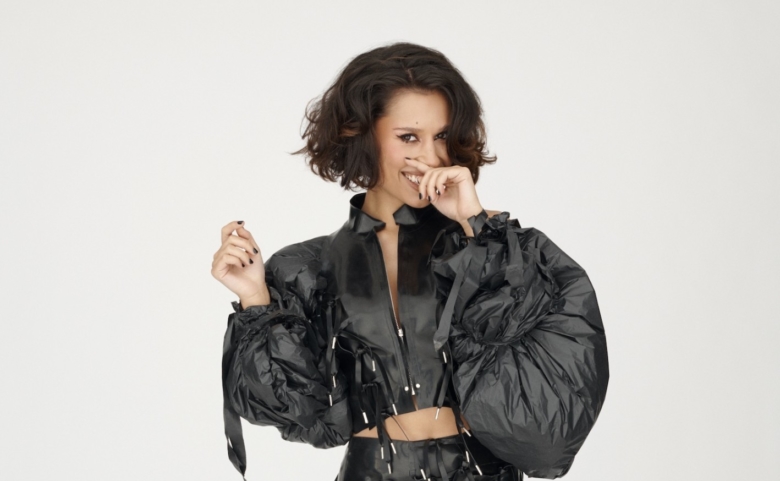 When Raye eventually arrives for our interview at HUNGER HQ, she’s got one arm outstretched, ready to hug me, and a drink from Starbucks in the other hand. She’s like a walking, talking version of that “me coming into work 20 minutes late with an iced coffee” meme, but considerably more low-key. You could never hold the singer-songwriter’s bad timekeeping against her, though: she personifies the age-old belief that creatives must exist in some kind of romantic, consuming chaos. You instantly get sucked into the vortex.

“I’m able to go into writing for myself and always have some emotional drama or heartache or bollocks that I’m dealing with,” the 22-year-old says with a touch of self-deprecation, rolling her eyes and scrunching her hair. Just four days previously, she texted her ex some “stupid, honest” message; she’s still reeling but happily telling me, a stranger, about it as though we’re old girlfriends catching up over Lambrini. “I’m like, ‘Why can’t I just keep my opinions and feelings to myself?’” she says, her south London accent – she was born in Tooting, bred in Croydon – now sounding stronger. “But it’s what makes me me.” Is she a serial drunk texter, then? “Babe,” she moans, “this is the worst part about it – it doesn’t matter if I’m drunk or not. I think I’m very emotionally led, for sure, very impulsive, so when ideas pop into my head, I’ll act on them almost immediately without thinking about the consequences – it makes for great music. I always have that excuse – like, ‘Oh, I’ll do it for the art!’”

Though she wasn’t encountering heartbreak when she first decided to write, the young Raye – Rachel Keen back then – was sweetly documenting what she saw around her, writing songs from the age of seven about “bullying in the playground and understanding why homeless people are homeless”. After deciding, at the age of 10, that she wanted to be a writer and performer, she set her sights on London’s Brit School, learning how to play the cello and flute to help her meet the entry requirements. Her dad gave it to her straight with some “very cold, hard truth”, and told her in the car one day that her chances of making it in music were about “one in a million”. But he built her a set-up to record in, with a “shitty mic” and a duvet taped up on the wall to soundproof the room, and when the time came, she was accepted at the school. 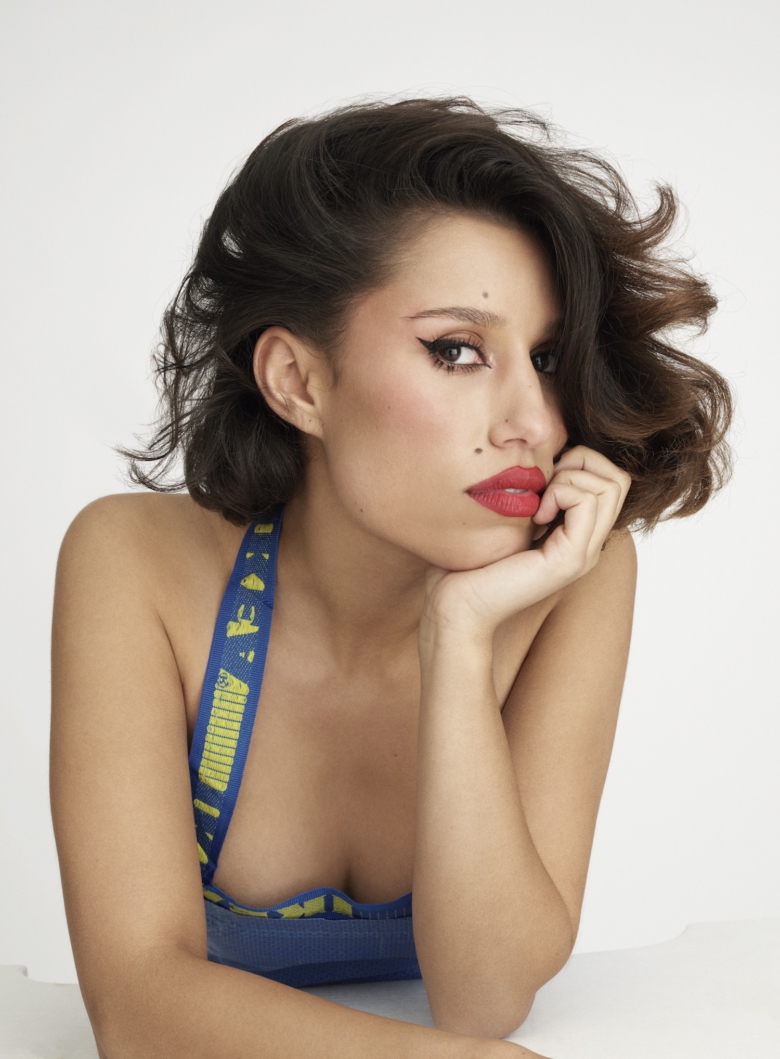 RAYE wears a DIY corset made from an IKEA bag. Her jeans are sustainably made by MARR LDN

Raye lived a life of two halves as a teenager, arranging professional writing sessions after early finishes on a Friday and every weekend from the age of 14, while still being “that stereotypical kid”. “The London I grew up in raised me,” she says. “It defines me – how I handle different situations, how I react to dramas, how I deal with confrontation.” Londoners, she says, are “bred” to express themselves, and she was writing poetry even on the night bus home after sneaking out to meet her friends on the high street, to “sit there, smoking cigarettes and talking about life”.

“I used to be on the street with my girls and our big earrings. We’d be starting shit on the street,” she says. “That rough-and-ready attitude made me who I am today. We don’t take shit in south London. If someone’s trying to steal your phone twice a week on Croydon High Street when you’re walking to the bus station, you have to be able to take care of yourself and you don’t feel weird or wrong being yourself.” As true to herself as Raye is, she is the first to admit she has not always been able to do things her way. Having signed to a label at 17, she has learnt the hard way. “It’s not just putting out music to make myself happy, I have 30 other people who have to approve,” she says. And one of her biggest realisations was that, while label bosses and execs might try to claim her victories as their own, nobody was going to do the work except for her. Now, as her sound matures, she’s learning to prioritise herself.

“I’m defnitely eight times more in my own skin with what I’m doing now,” she says. A case in point, her recent release, the effortless, angelic-sounding pop song “Please Don’t Touch”, leans into lyrical vulnerability – “But once you’ve laid a finger, it can’t be undone / So please don’t touch me / If you don’t mean it.” “I’m definitely progressing in the right direction,” she says. “It’s just such a tricky thing to get right.

If you were to hear my Dropbox, there are hundreds of dance songs, hundreds of ballads, 200 R&B slow jams, symmetrical mathematical pop. I have so much music. You are talking to a suppressed poet – that’s how I feel.”

It’s no surprise to hear she’s hovering across so many genres for future releases, having orbited multiple sectors of music already. She grew up in the Church, and gospel and soul were played at home, their influence crystalline in her room-filling vocals, but her features on dance tracks are what pushed her into the public consciousness. Jonas Blue and Jax Jones enlisted her as vocalist for their respective tracks “By Your Side” (2016) and “You Don’t Know Me” (2017), with both breaking into the UK Top 20. Last year, she featured on David Guetta’s sunshine- soaked “Stay”, a song that quickly found its way onto the playlists for St Tropez boat parties and Ibiza poolsides. 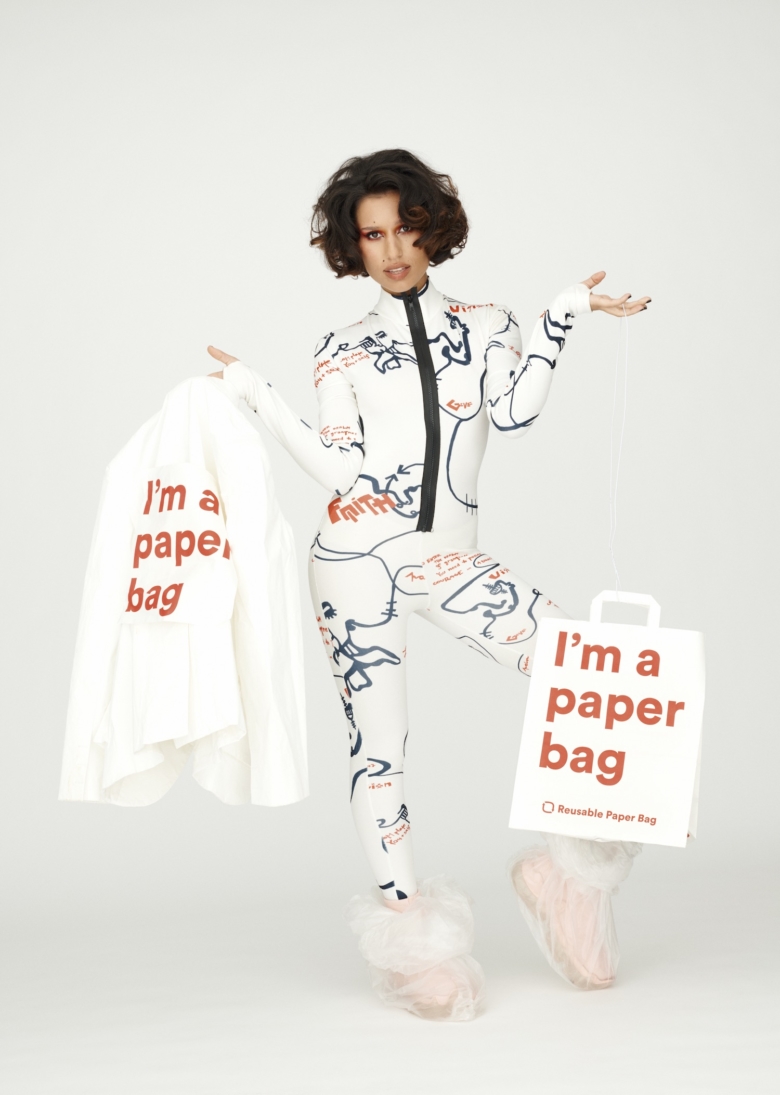 RAYE wears MARR LDN bodysuit made from recycled materials and shoes from SWEAR LDN, with DIY boot cover made from plastic bags. She also sports the must-have accessory of the season: a 15p paper bag from Iceland.

Behind the scenes, as a songwriter, Raye has credits on tracks by Charli XCX, Beyoncé and Quavo. Right now, she’s working with Normani and Pharrell. “One day I’m going to win a Brit award and I’m going to stand on stage and say, ‘This is for the songwriters who sit at home on the sofa while the artists go and receive the trophies.’ Because it is unfair – songwriters have it hardest. I’m an artist, too, so I’m fine, but something doesn’t sit right there,” says Raye. “I remember my first trip to LA, when I was 17 – I fucking hated it. You just have to earn your stripes, and now I’m in a place where I’m going to LA and most people want to write with me, which I’ve worked bloody hard for. I’m given that respect that I’ve fought for, especially as a woman. Walking into studios, people would be like, ‘Are you the girlfriend or are you the assistant?’ So now that I’ve earned that, it’s given me a sense of pride and reassurance, to go in with the artist and feel empowered to really see it through, to feel like I belong now.”

It’s hard to imagine being anything except entirely enamoured with Raye – her instant optimism is disarming, impossible not to reflect straight back to the source. As you would guess from her music, she’s a hardcore, romantic dreamer. But with so much on, it’s a surprise she can even t in dating. “I’m one of those people who, when I fall, I fall so hard,” she says. “I have the worst taste in love interests also. Maybe that’s to do with what I do, searching for something exciting. I find it hard to be with the average Larry or Sheila.” As a wonderful side effect of fame, she also now has the bonus of having to second-guess someone’s motives for being with her. “I’m not saying everybody wants to love me,” she assures me, “but I think I would be a good girlfriend to have – I’m earning money, working hard, I would look good on your arm. So, finding something is really hard. Right now, I’m so single that it just hurts my core. I’m literally Oreos and ice cream. I’m also, to be completely transparent, just scared of men at this point in time.” 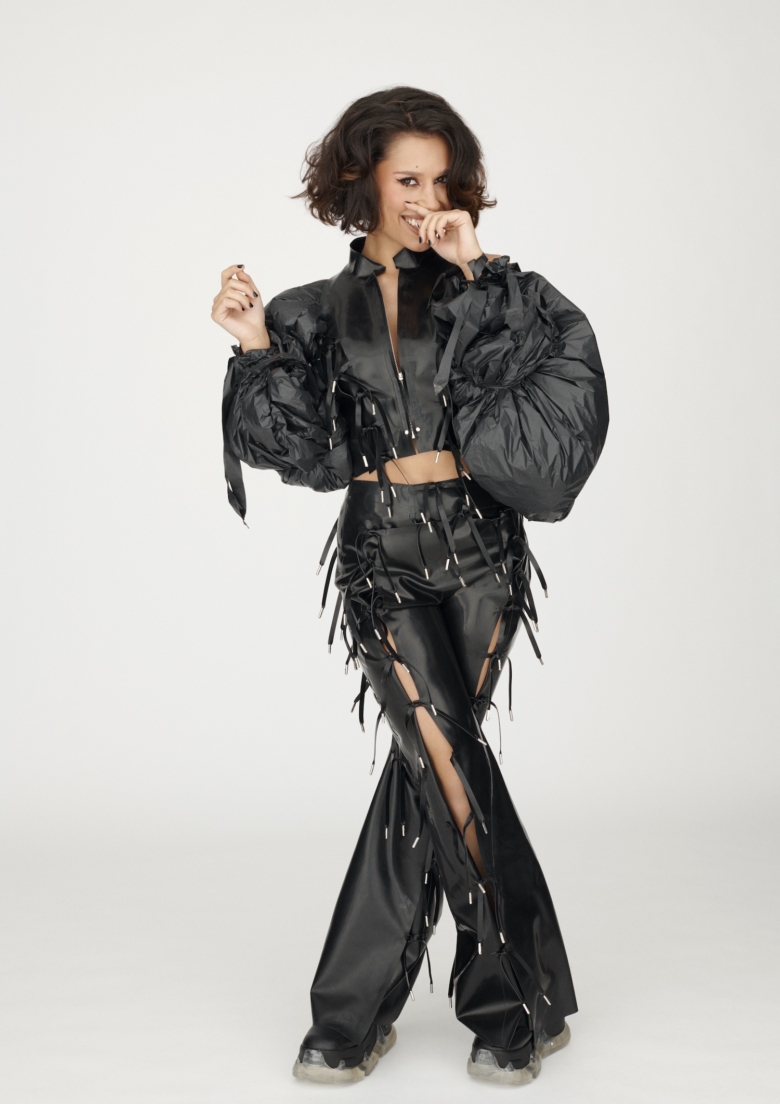 Proving she’s no ordinary bag lady, RAYE wears top and trousers in ethically made latex by HANGER INC. Her sleeves are made from bin bags and jumper cords and her shoes are by SWEAR LDN.

Things take a serious tone for the first time, as Raye goes on to explain that, after a tough 2019, she has started seeing a therapist. “I’ve been through some awful things in my past and with me being the happy, brush-it-off, it’s-fine, deal-with-it-later kind of person that I am, I didn’t realise until I went to therapy how I was dealing with something I went through when I was 17.” She had her drink spiked, she tells me. “I was very new to sex, it was very alien to me, and something happened to me when I was on holiday. And my God, it ruined me for a long time.” That’s why, she thinks, as soon as someone gets close to her, she runs away. “Sexual abuse is fucking traumatic and has ruined some of my best friends’ lives, and has ruined mine. That’s why I’m so passionate about talking about it. And I can’t wait to release some of the songs that I’ve written about those experiences when the time’s right, because it is uncomfortable.” For now, she’s still working out what she wants from someone. “I know God has got a plan,” she says breezily, back to her chirpy self. “I’m sure my one is out there somewhere. In the meantime, I’ll just be out here, making bad decisions and writing lyrics about it!” 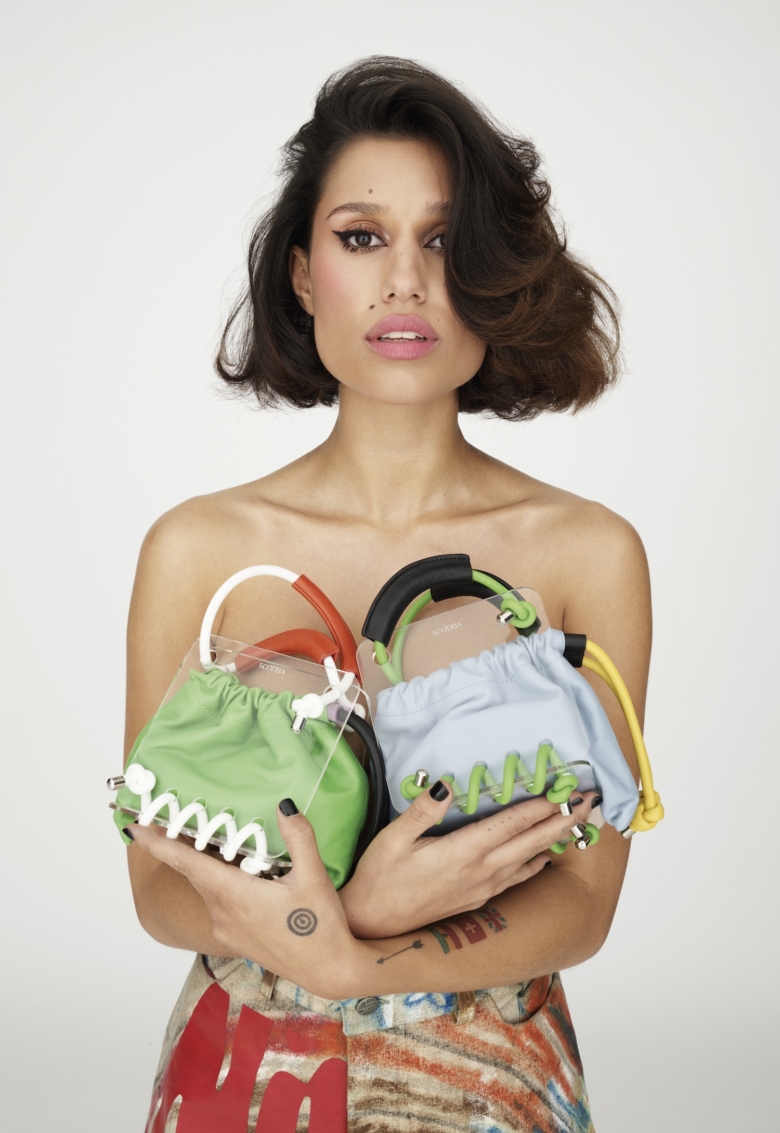 Raye plays peekaboo with bags by SCOTRIA. She wears jeans by ALIVE AND MORE.

After we’re asked to wrap up for the second time (we’ve been talking for so long someone else is needing to use the meeting room), I ask Raye what kind of woman she wants to be. “I want to be the best kind I can be,” she replies. “Last year was tricky for me – there was a lot of running away from some realities. Like I said, therapy is really, really helping me, and we’re losing so many incredible artists to drugs and all of these things. I got caught up in a whirlwind of that. Dark, dark, dark, dark times. It’s so easy to see the surface and see what Instagram shows you, but not to know what we’re dealing with behind closed doors.” In addition to everything else last year, she parted ways with her manager of seven years. With so many big changes, she admits she has found it a “very scary time”.

“I want to be the best me I can be, and the best me isn’t Raye fucked up in the crowd at some party, forgetting about her problems. The best Raye is the Raye who is addressing them – focused, working hard, but happy and making sure that my mental health and my brain are in a good place. This is a weird time to be alive, and it’s only going to get weirder – coping mechanisms in the 21st century are definitely unhealthy. I just want to make sure that we put the phones down, we turn the telly off, we put the alcohol in the cupboard and we sit and learn to process ourselves without all the distractions. Sorry to get deep with you!” And then she laughs for maybe the hundredth time and slings another arm around me to hug me goodbye. I feel reassured as I watch her leave: if Raye’s the future, we’re going to be just fine. 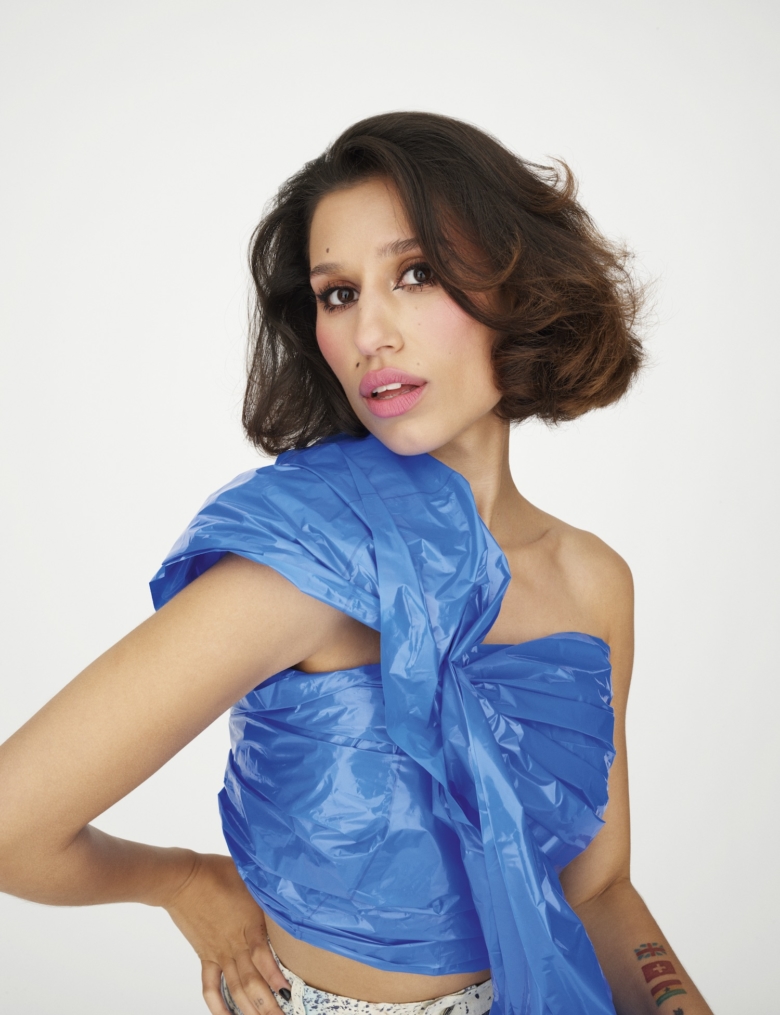 RAYE proves she can make even trash look good in a top made by stylist Roisino from a blue bin liner. Her jeans are sustainably made by ALIVE AND MORE. 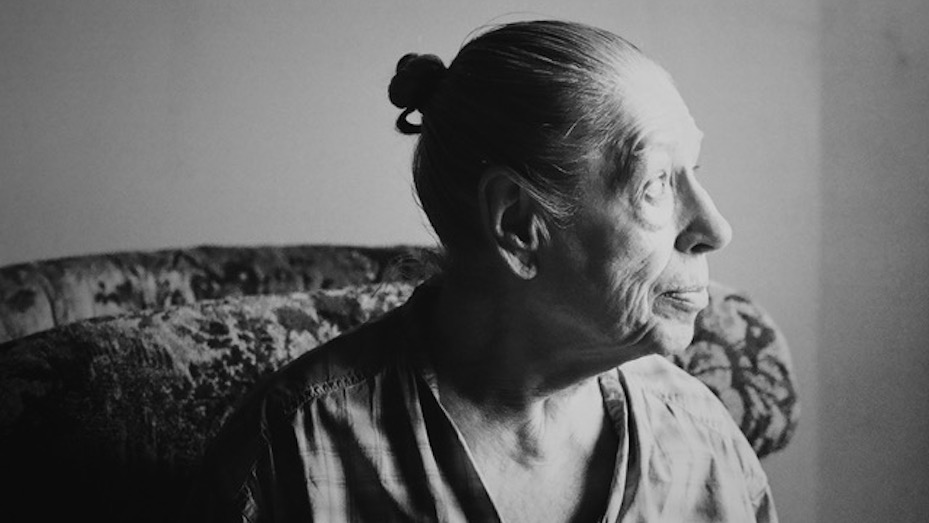 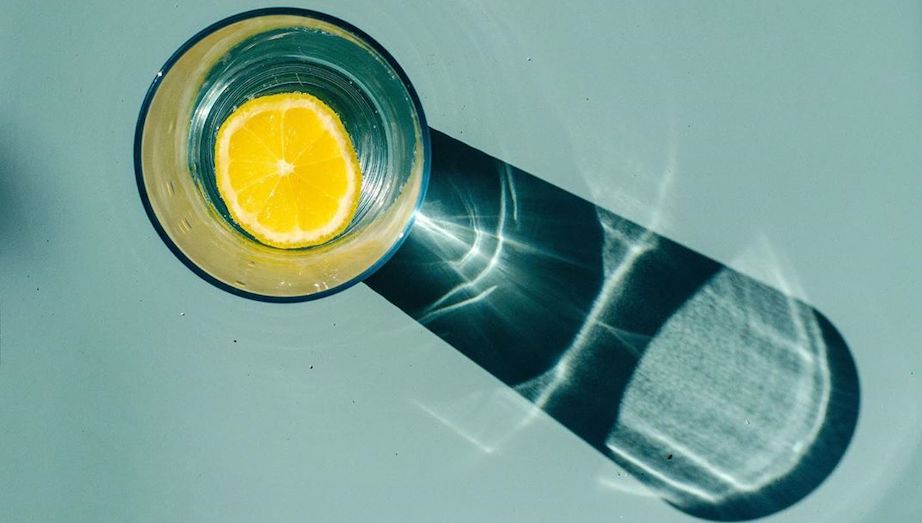 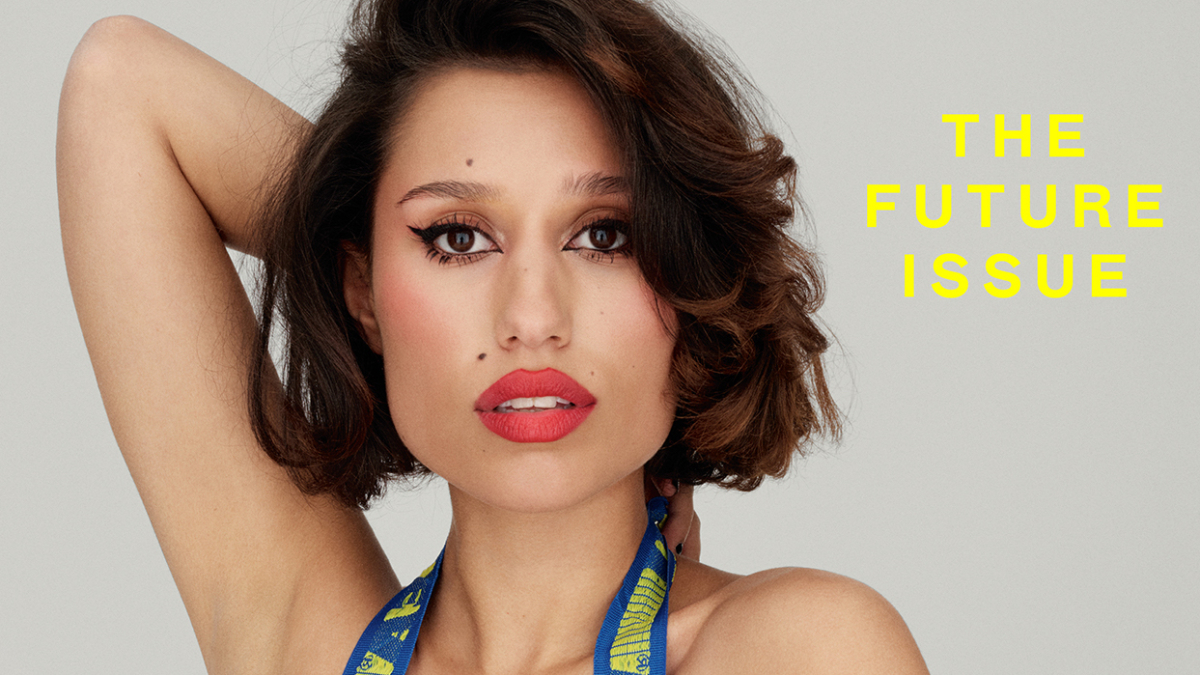 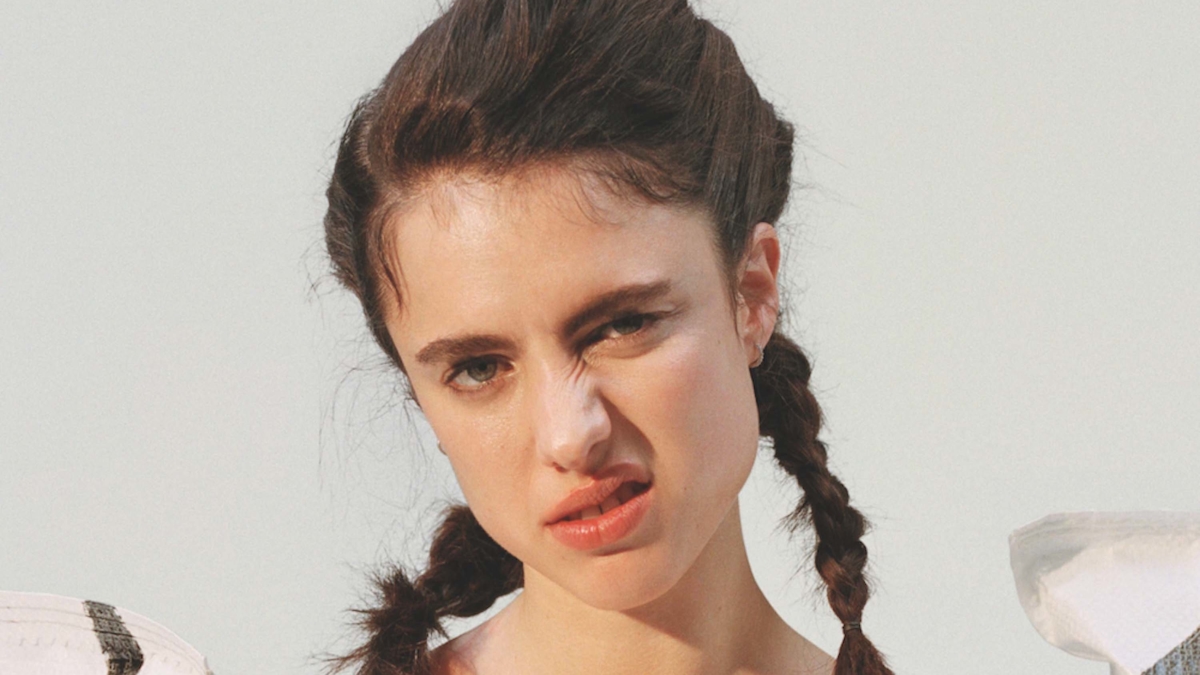 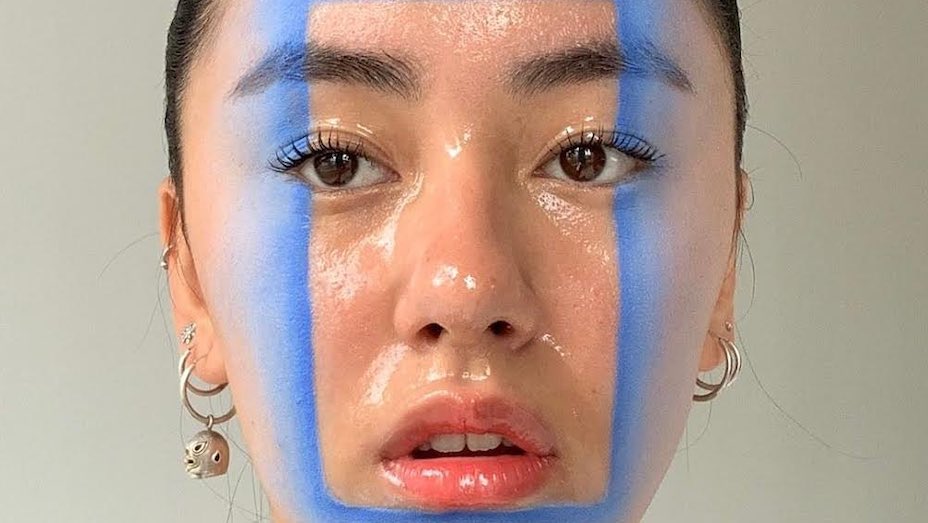