It’s about 2.30pm and Andres Felipé Barrientos, much better known as Yung Filly, joins me on the phone following a photoshoot he had earlier in the day. As always with technology, it never goes as smoothly as hoped for and Filly sits on the other end of the call talking to himself for, admittedly, far too long. With that out of the way, the viral sensation explains he’s now in the car and on the way to the mechanic to change a slow puncture. I suppose having legions of fans across the world (he currently has two million Instagram followers and more than a million YouTube subscribers) doesn’t exclude you from the mundane, day-to-day issues the rest of us face.

Born in Colombia, the 27-year-old moved to southeast London as a refugee with his mother when he was a child and has lived in the city ever since. His journey into online content began when he started producing comedic video content aged about 14 while at school, posting clips on the long-gone social-media app Keek – because he found himself “hilarious”. Filly’s content quickly began to gain traction, with his Asking Awkward Questions YouTube series gaining him lots of attention. The premise was simple – ask the public horribly embarrassing questions; and Filly’s infectious confidence and no-holds-barred approach to comedy made the series a staple for those looking for a laugh. He has now amassed nearly 50 million views on the platform.

Filly became one of the leaders of a new online revolution: a group of digitally savvy Londoners whose unapologetic authenticity has captured the humour of millions. In close vicinity to Filly is fellow social media celebrity Chunkz. The two have managed to transcend the digital world and become mainstream names, but Filly insists that online is still the best way forward. “A production company can spend a whole year trying to plan a great show,” he tells me. “But if me and Chunkz put a camera on top of our shoebox and film, I’m so sorry, but it’s gonna be ten times better than a TV show.” Don’t get it twisted, this doesn’t mean the Londoner wants to move away from the world of TV. In fact, he counts his appearance on The Great Celebrity Bake Off for SU2C (Stand Up to Cancer) as one of his greatest achievements. “Generally, people on that show say, ‘Hi, how are you doing, sir?’ We say, ‘Yo blud, wagwan?’ So the fact that I was on that show and they loved me for who I was let me know that I’m smashing it.” 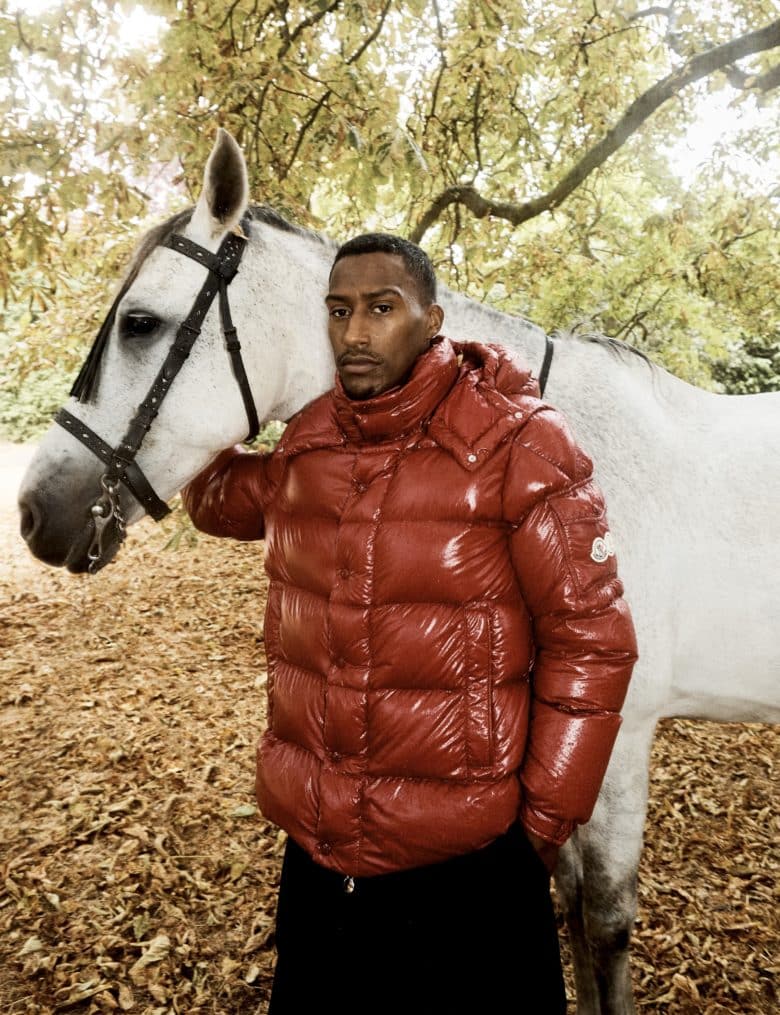 Filly wears MONCLER and trousers by NEEDLES. Available at SEVENSTORE. 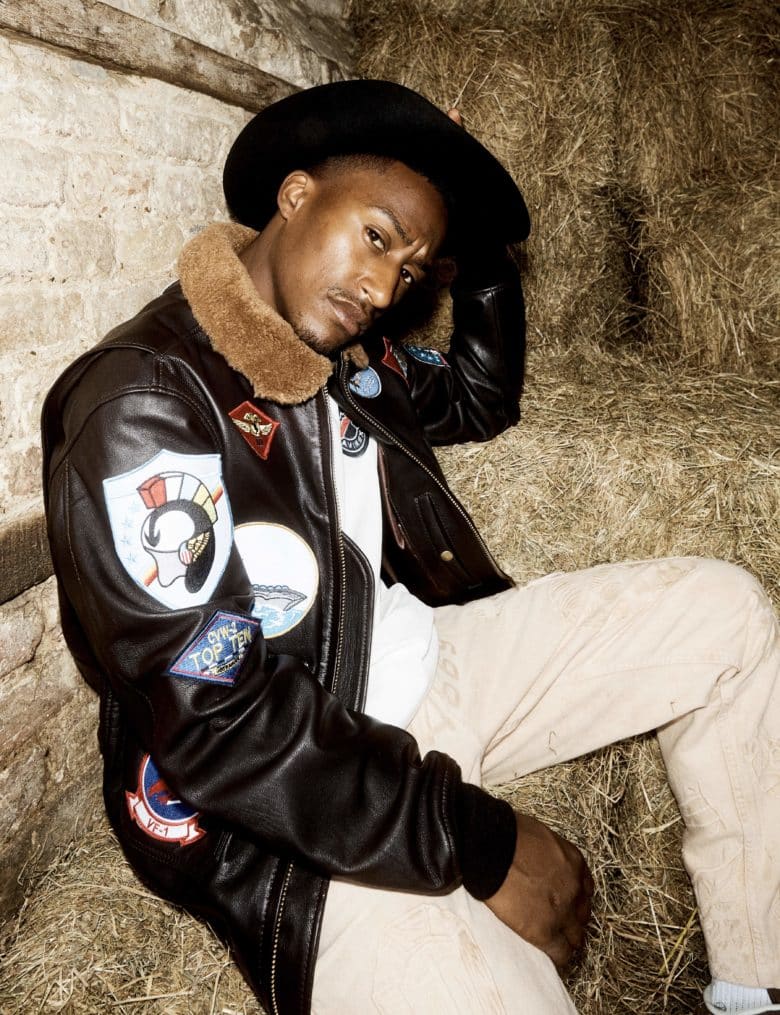 Filly wears t-shirt and jacket by AVIREX, trousers by SANGIEV and hat by GUCCI.

Although it may seem like he was born to create digital content, it was never Filly’s first love; that position is reserved for music. “I never sat down and said I wanted to be a YouTuber. I just did a couple of videos on my phone, uploaded on my social platforms and everyone laughed, so I just carried on. I wrote bars before I ever made a YouTube video,” he reveals. His most recent track, “Day to Day”, featuring the grime star Chip, is yet another clear example of Filly’s talents – and he is more than able to hold his own. As comfortable spitting a 16 as he is hitting a high octave, this isn’t just something Filly is ticking off his bucket list – it’s something he genuinely holds dear. “I think you just hear the music and you can just tell I am so in love with it and I understand it to such a high degree that you can’t compare me to no one else.” Filly’s love for the game is refreshing… and justified. I mean, we’ve all seen online celebrities and influencers release embarrassingly low-quality music for a quick buck, but Filly is in it for the long game, with a solo music release planned for later this year. “Yeah, right now I’m fully focused on this mixtape. Let’s finish this, get that out and let’s show everyone I’m an amazing artist,” he says excitedly. 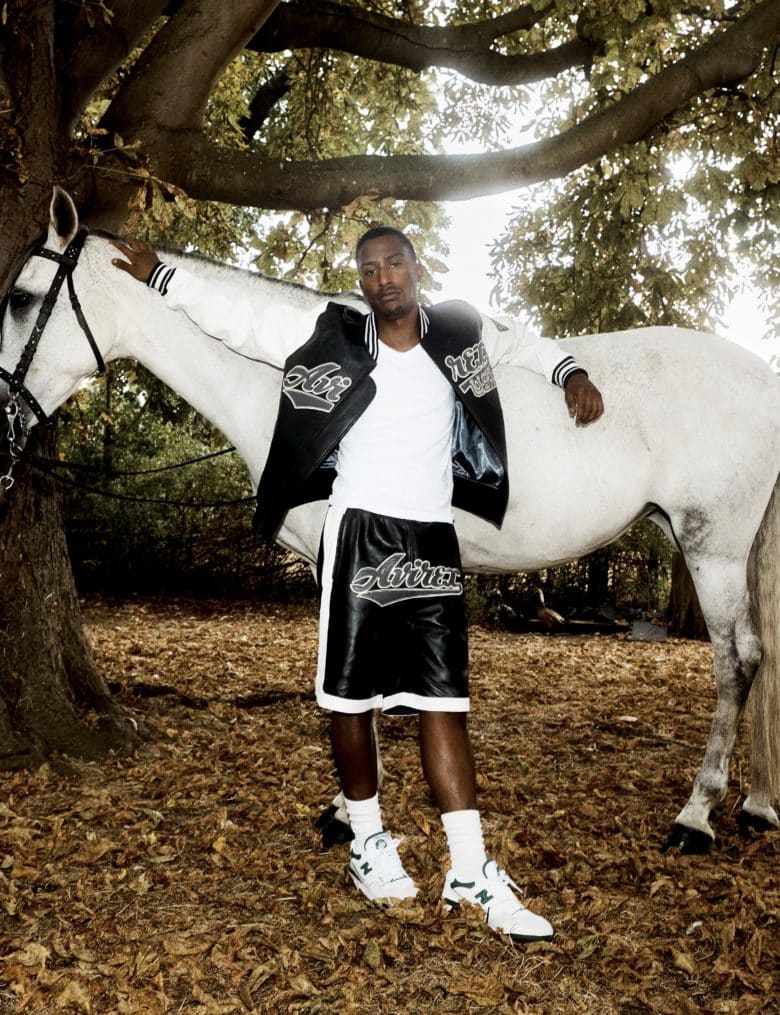 Filly wears jacket and shorts by AVIREX, shoes by NEW BALANCE and stylist’s own vest.

All of these creative avenues have amalgamated into the widespread fame Filly is now living with, and although that comes with financial benefits and exciting new opportunities, dealing with his celebrity is something he has had trouble adjusting to. “My mental health is crazy, man, it limits me so much,” he confides. “You’ve got to remember I’m not Drake, I’m only Yung Filly. The whole world doesn’t know me and that’s why it’s so annoying, because a lot of the time it’s all in my head. I’m human. I get sad. I get stressed. I cry. I’m happy. I have the same emotions everyone else does.” And the issues go beyond mental health: Filly’s growing fame has meant “people have tried to rob me” and fans have disrespected boundaries. “I remember I had a relative die and I was with my mum. She’s upset and someone came over to the house while my mum’s in tears. All these little things, they just stay in the back of my mind when I go out.”

While he may have built up a larger-than-life, gleeful persona in his side-splitting videos, keeping that act up can be immensely draining. Filly explains how he feels the world isn’t always getting to see the real him, that when he produces something more personal it doesn’t receive the same recognition. “I did an Amazon documentary and I’ve got my mum and my sister in it. Everyone’s crying, talking about how much they love me or the struggles I’ve gone through, but it doesn’t have more than half a million views,” he says. “You get me on a dating show, saying, ‘Let me get a kiss,’ and it gets millions and millions of views.” Still, he’s keen to show a more sensitive side to himself and tells me that it’s an attempt to get away from being a puppet forced to entertain the masses. Despite his seriousness, he still manages to lighten the mood by poking fun at himself – “This must be the easiest interview ever for you – I talk so much,” he laughs. 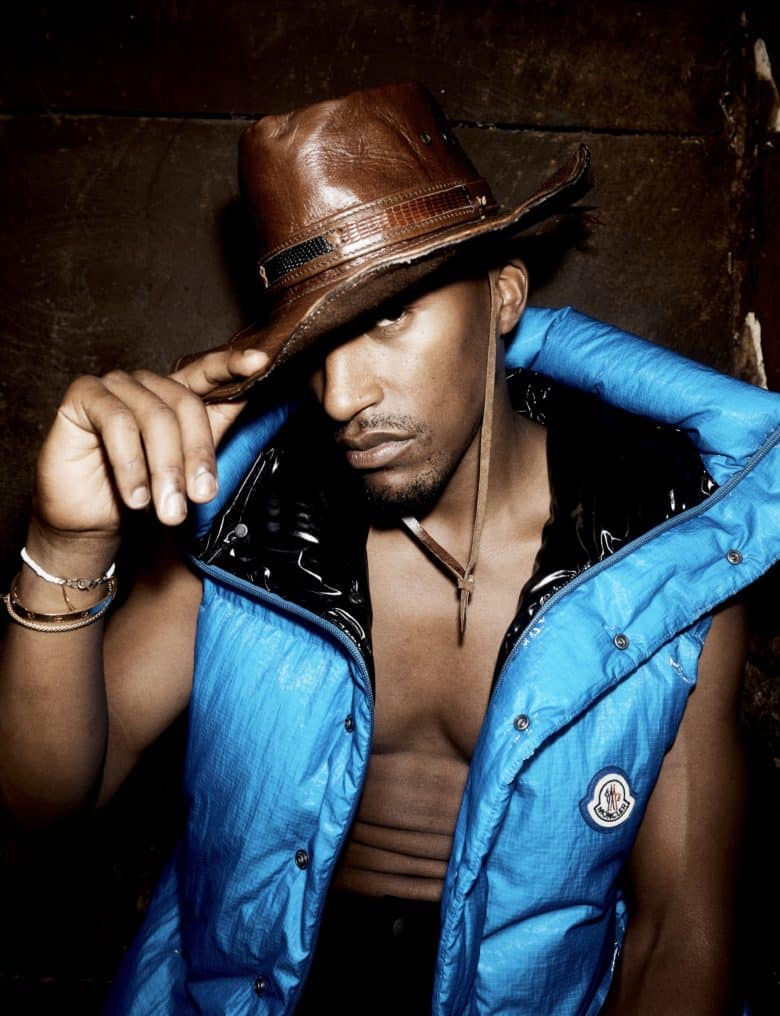 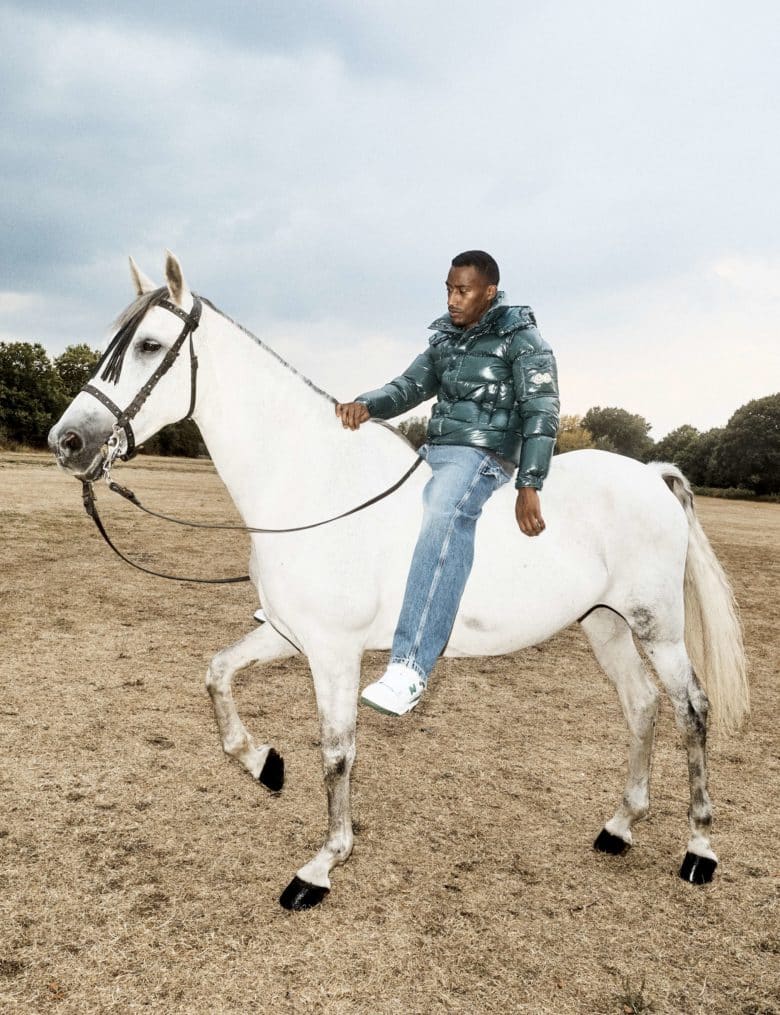 (Left) Filly wears jacket and trousers by MONCLER, own bracelets and stylist’s own hat. 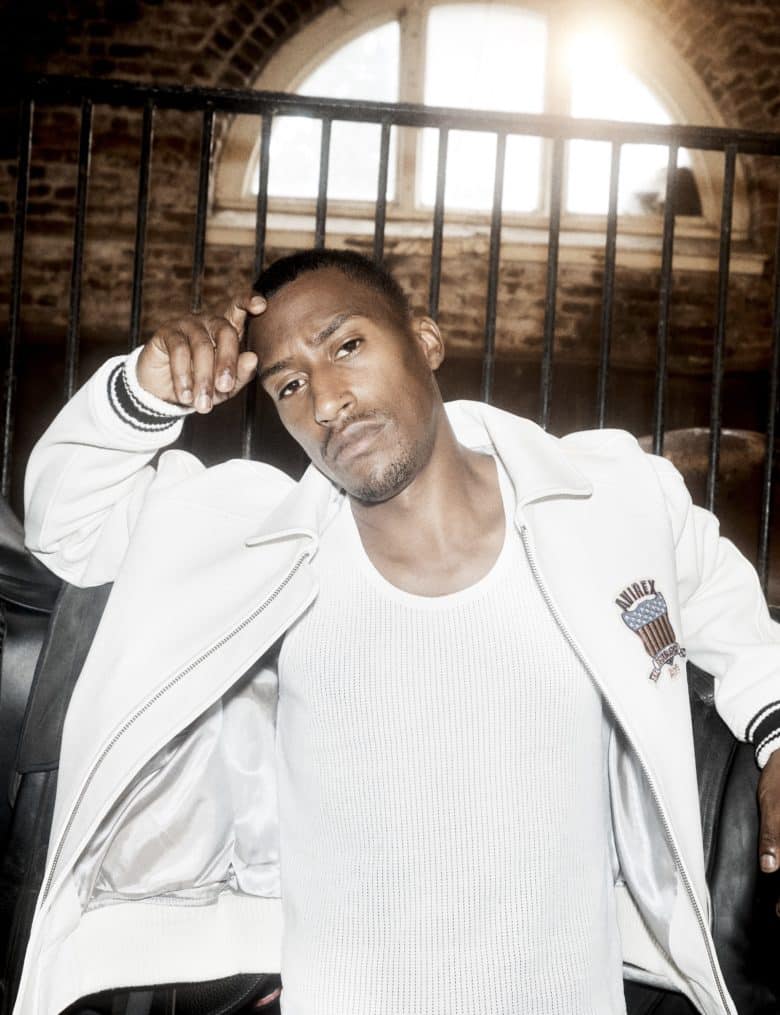 Filly wears jacket by AVIREX and stylist’s own vest.

Despite his issues with fame, Filly doesn’t take anything for granted and attributes his strong values to his mother, Maria, who he describes as his “biggest support system”. And like most of us, Filly wishes he had taken his mum’s advice a lot more seriously growing up. “Had I listened to my mom from the get-go I would have not made half of the mistakes that I did and I regret that so much.” And his advice to his fans is that you should “listen to your parents”.

Our conversation starts to a close just as he reaches the garage, and Filly excitedly tells me about his end goal in all of this, and it’s pretty simple: “I just want to be known as an all-round, great entertainer. That is my dream.” He has already built up more than a solid foundation for that with his jack-of-all-trades approach to entertainment. “I can’t think of no one that dominates YouTube, does TV and makes music in this country like me,” he adds, crediting the multihyphenate Jamie Foxx as the blueprint for his career, and if Filly is even half as successful as Foxx, he will certainly achieve his goal. “I want to be the greatest entertainer the UK has ever seen,” he finishes with conviction. And if there’s anyone who can do it, Yung Filly has us convinced it’s him.