[T]orture Garden is the largest fetish club in the world. The unique hybrid of straight, gay, industrial, hardcore S&M, post-goth and fetish fashion subcultures has carried it through 25 years of enduring success, notoriety and above all else, an air of mystery. Its reputation within the fetish community is legendary and has attracted famous faces such as Marilyn Manson, Alexander McQueen, Courtney Love and Dita Von Teese.

Torture Garden is not the kind of club you can stroll into on a whim with a leather dog collar hanging off your neck, if you want access to this world you need to commit – Adam Ant was famously turned away from the club for not adhering to the strict fetish dress code. With Torture Garden’s 25th anniversary fast approaching, we caught up with David Wood, the club’s co-founder, to talk about the impact of technical advances in the fetish community, tips for getting in and the challenges in maintaining such a large and underground club in London’s declining club culture. 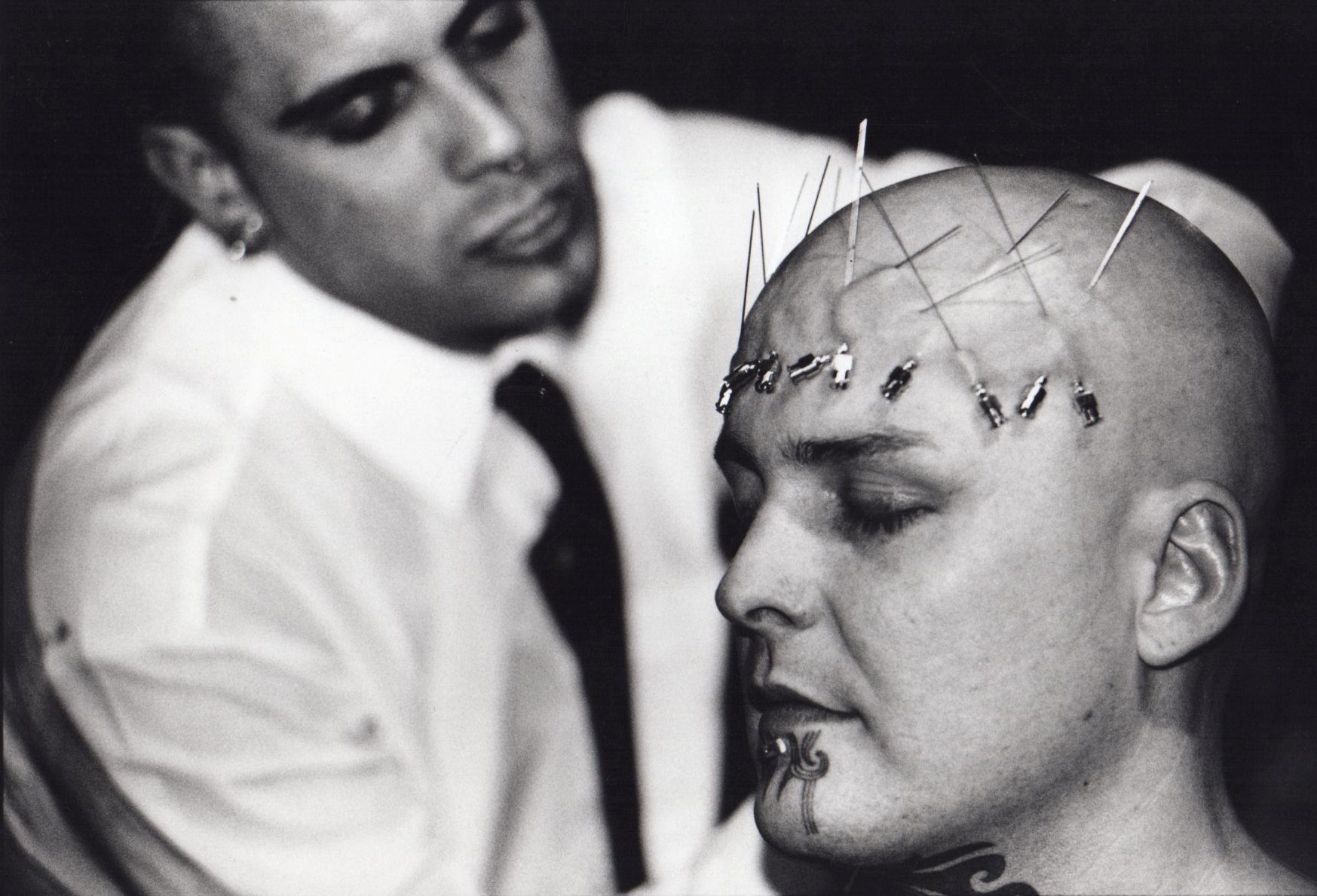 When Torture Garden first opened, how was the initial reaction? How would people even hear about a scene operating so underground?

We were the young upstarts of the fetish scene when Torture Garden first appeared in 1990. We wanted to create a new kind of fetish club for a younger and more edgy, arty and extreme crowd, as well as an alternative club that had a contemporary and progressive music policy. TG was immediately a much darker and more extreme kind of fetish club than the others that existed at the time, and elements like multi-screen visual projections, edgy performances, market stalls, installations and multiple rooms with eclectic music became the general club concept that continues to this day.

In those days events were promoted just with flyers given out by hand or placed in the few fetish and alternative shops that existed in London. Luckily both my business partner and I had quite a lot of friends that wanted a new event like TG, but still only 100 people attended the first event on a Wednesday night in Shepherds Bush at the Gay venue called Opera on the Green, and although it did have a unique atmosphere it didn’t look like it would last six months!

One of the things that transformed our crowd over the next few events was when we invited down all the leading characters from the new Body Art scene, and they were extremely supportive because we provided the first social events for this new evolving underground scene and it created a new edgy mixed crowd that didn’t exist at any club event before.

By our 6th event we had 500 people attending and it exploded into a new scene with a life of it’s own! 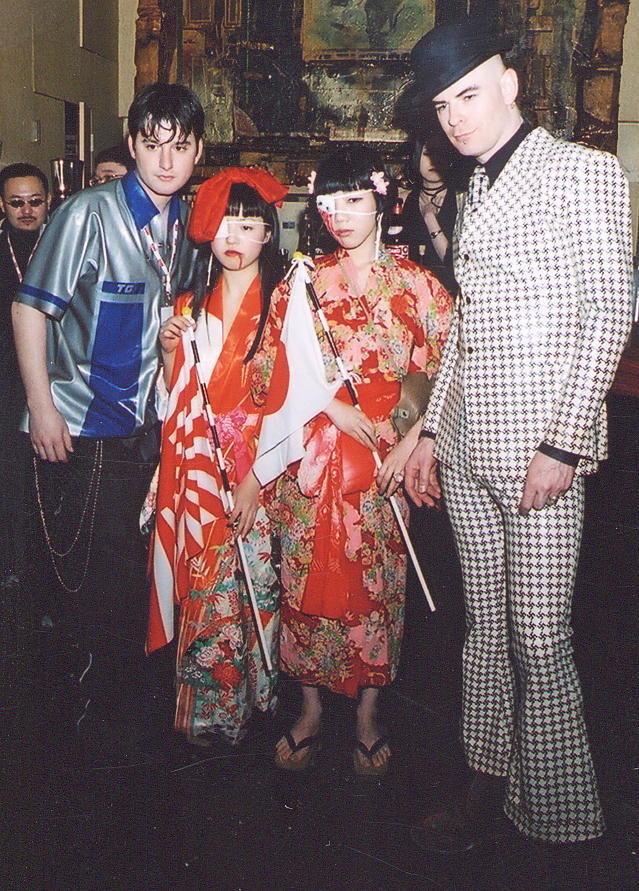 What has been the biggest challenge in keeping Torture Garden as the biggest and most famous fetish club over the last 25 years?

We’ve never tried or aimed to be big and successful, and we’ve always just done the club and event that we believe in and we want to go to. Like a giant private party. It’s essential that we still love and enjoy the party and want to be there with our friends, as the moment that you just treat it like a business and become detached and jaded it will show in the atmosphere. So the biggest challenge is keeping the enthusiasm and passion for new ideas, new performers, new music etc and keeping up to date with the latest clubbing and cultural trends. I still love to go out to whatever exciting new events I can find and I still love finding new performers. When we run out of ideas and excitement then the club will die.

How do you feel Torture Garden compares to other fetish clubs globally? What can make it stand out in a community of extremism?

Tokyo has been the only city where the costumes are as creative and as original as London at its best, but I’ve never found a fetish crowd that parties harder and has more fun than TG in London. 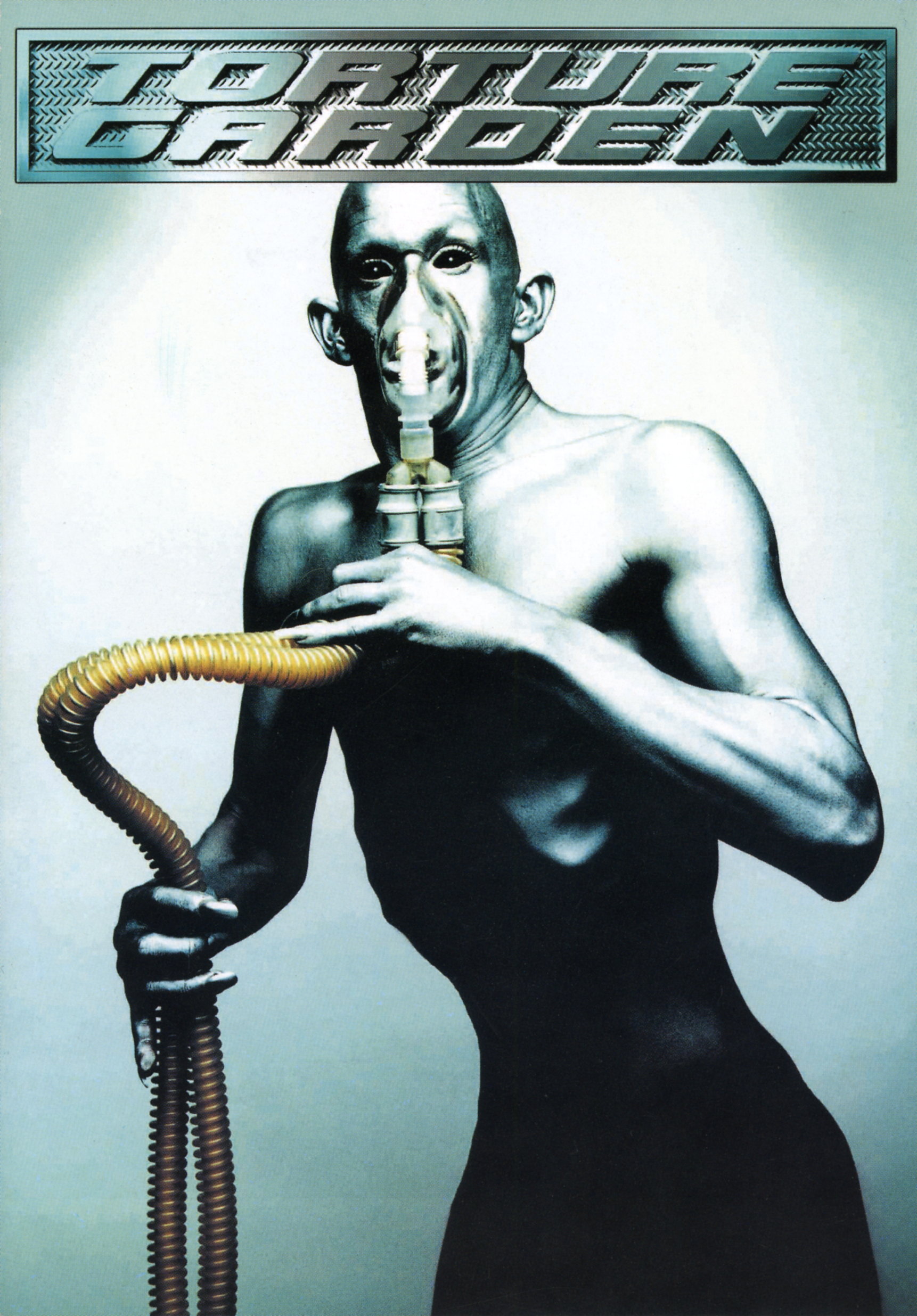 Poster for Torture Garden at the Complex Club, 1997

I see Whiplr is sponsoring the birthday event, how have social media and modern technology changed things for Torture Garden and its patrons?

The internet and social media sites have been a huge help in opening up the information about the fetish scene and clubs to a wider market. You can now live in a small village in the UK or anywhere in the world and find out about Torture Garden at a click of a button. It’s also helped create a global community and online scene of those that want to attend events or performers, designers, and artists etc, and everyone can check photos or videos of events. I’m as in touch with those that attend or perform at Torture Garden in Tokyo as I am of those in Manchester.

in 2015, less than half of teens said they identified as entirely heterosexual, and just recent studies in colleges have also shown a huge spike in sexual practices considered to be 'unusual'. How do you think the sexual revolution has benefitted fetishists and fetish clubs?

Again it’s made information easily available and given people confidence that they’re not the only ones and it’s normal. People have always had desires to explore their identity and sexuality, and to experiment and have fun. The information is now readily available and there’s much more of a knowledgeable, intelligent and open minded culture. Fetish clubs are safe and respectful environments where people have a freedom to explore their identity and how they want to look, and also explore diverse sexuality. As long as with respect and consent. 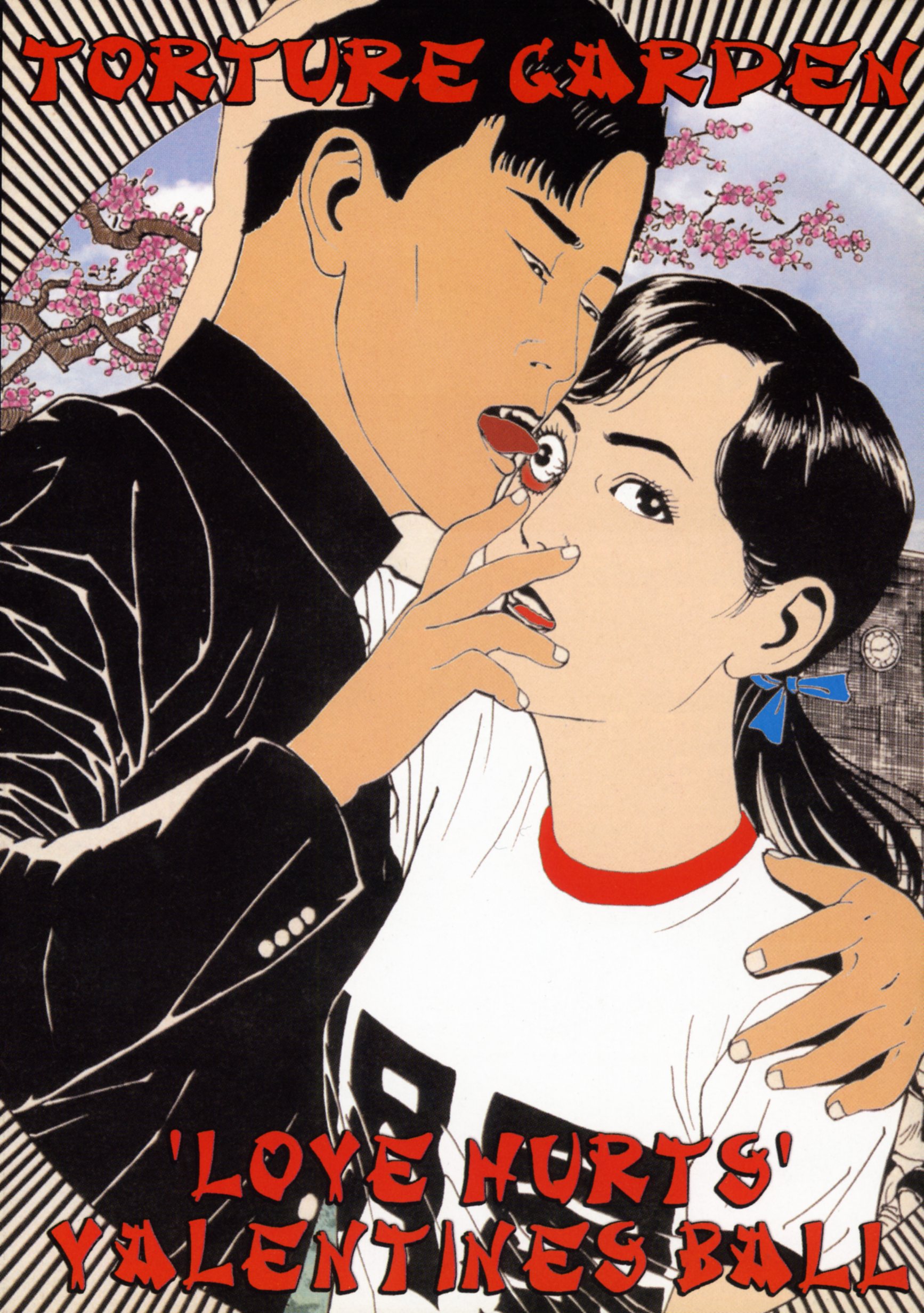 Is there anything you wish would change about the fetish scene as it currently is? What kind of culture is Torture Garden trying to promote?

Our biggest current problem is with too many curious men wanting to attend because there’s lots of sexy girls there, but wanting to get in with the minimum dress code effort. We already turn away loads of people not in full dress code, but If we could have a personality questionnaire for the 2000+ people attending we’d probably turn away a lot more for just being the wrong people for TG.

The other big problem is with the lack of interesting multi-room, large-scale venues in London. Venues are our biggest limitations to creativity. 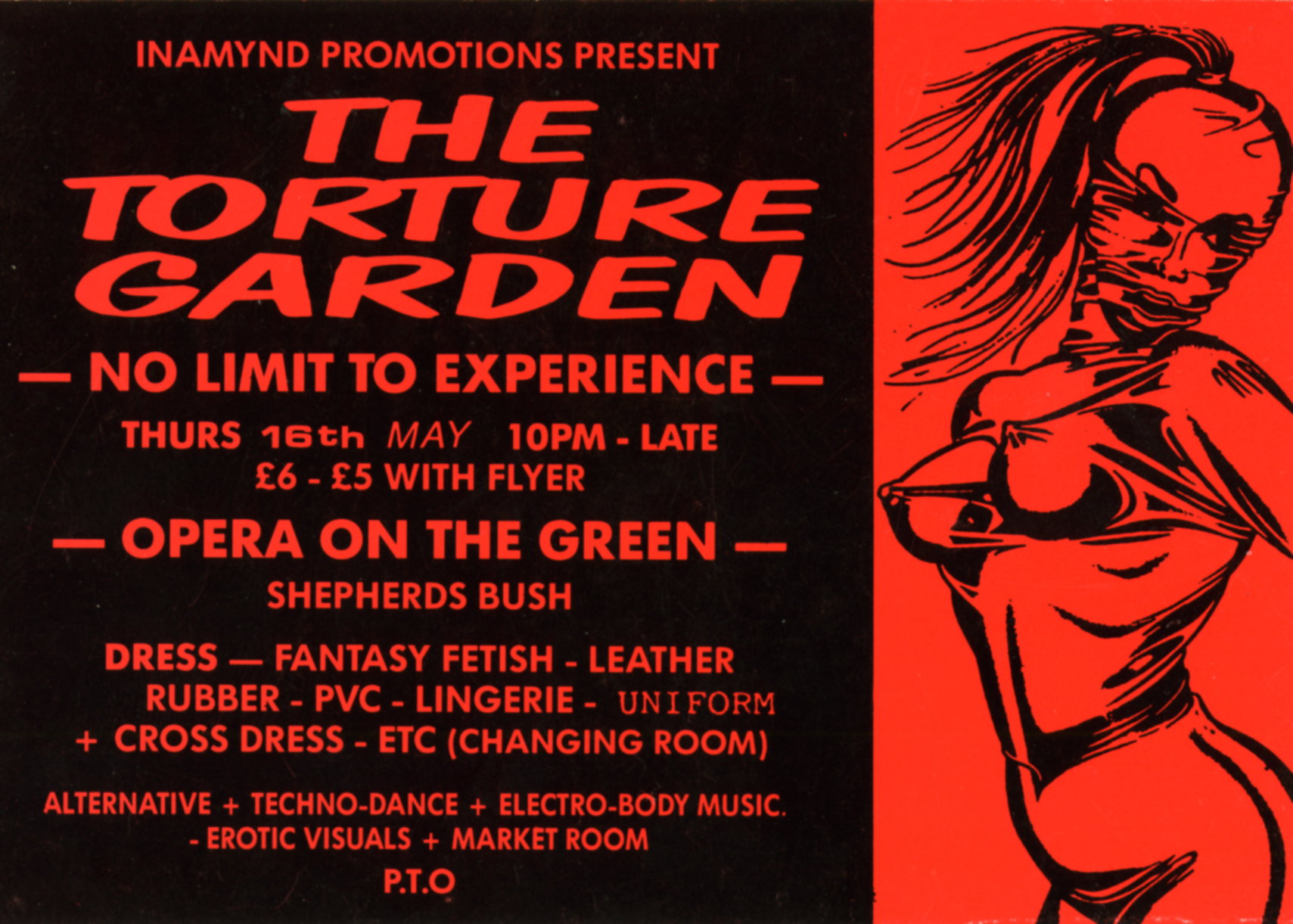 Torture Garden at Opera on the Green poster, 1991

Where do you see the future of Torture Garden going and how do you plan to keep it going?

Torture Garden is a concept and a scene that’s always been more than just a club night.

As a London club experience it can keep going as long as dressing up and exploring sexuality is still popular, and as long as we can continue evolving to make that an interesting experience and stay current for new generations going clubbing. If we lose interest or lose touch then it’s finished. Clubland is a changeable scene and three bad events in a row and you can be out!

It’s still my favourite club and still most of my friends’ favourite club and still very rewarding. Most of the time it’s a dream job and the best job in the world, and as long as I still love it and find it inspiring I’m excited to keep creating it. If we didn’t love it or believe in it anymore I don’t think we could continue and it would show. It’s more than a business or something that makes money.

The biggest danger to our future in London is almost every major large-scale, multi-room London venue closing down over the last eight years (SeOne, Mass, Colosseum, Bagleys and now Coronet in 2017). And even if we’re doing as well as ever in terms of numbers attending if there’s no 2000+ capacity venues left (there’s currently just two options) then that may kill us off or turn us into a cocktail bar!

But Torture Garden has been much more than just a London club for many years and we have regular events in Edinburgh, Tokyo, Rome, Toronto and all around the world, we have a latex clothing label franchise, a fetish fashion pop up shop – Le Boutique Bazaar, a performance art offshoot event called Body Probe, a performance agency and production company doing all sorts of corporate and private events beyond the fetish scene. So hopefully more of that and lots of new projects: books, films and who knows what else. We’re in a position where we could do anything.

Find out more about Torture Garden Events, productions and products, including the 25th Anniversary Ball this Saturday here.