[I]f you frequently suffer from feelings of inferiority or low self-esteem following a scroll through Instagram, Twitter, or Facebook, it’s likely that you could be struggling with Social Media Anxiety Disorder. It’s a new-ish, medically diagnosable condition that’s become increasingly widespread since the dawn of smartphone technology. The threat of the ailment (plus the negative impact of stuffing radio transceivers in your ears on the daily) are the price to pay for having a mobile device permanently to hand. Lingering concerns about the frequency and ‘coolness’ of what one posts on social media is something that most people can likely relate to—particularly Collina Strada designer Hillary Taymour who played with the concept for her Spring 2018 collection.

“We’re so oversaturated with imagery that we don’t know what direction to go in,” said the designer, enlarging on the theme backstage following her show at New York Fashion Week. “Growing up in front of our phones, we’re always comparing ourselves to other people. We all feel shit when someone has more followers than us, so we start doing the same things—tagging the same clothes, wearing the same makeup—overkilling everything. This collection is about rejecting social media, embracing our differences, and calming the fuck down. It’s time to get a grip.” 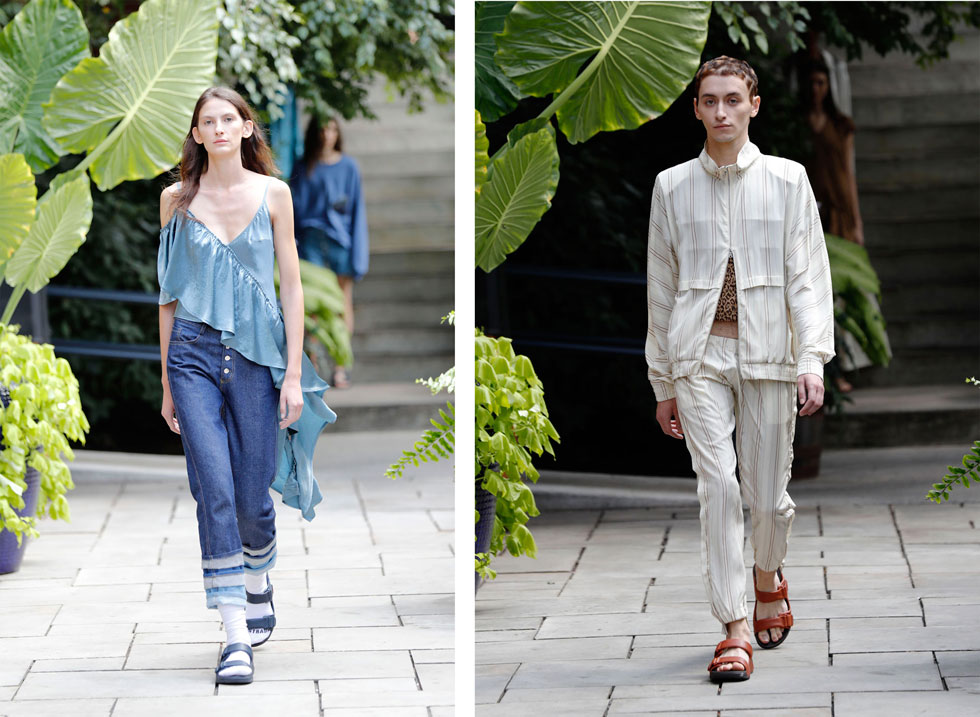 In physical form, ‘getting a grip’  added up to one of Taymour’s best collections yet. For Spring 2018, she played with seventies-inspired crochet, oversized eighties frills, nineties styling tricks, and bling-ed out rhinestones details reminiscent of Paris Hilton’s Swarovski crystal obsession in the early noughties. As in previous seasons, Taymour designs for men, women, and those who identify as gender non-conforming—meaning that there’s something for everyone in each of her collections.

Taiwanese artist John Yuyi closed out the show. The self-described social media addict has made a name for herself creating temporary tattoos out of screenshots from her phone. She was cast by Alessandro Michele in Gucci’s viral campaign earlier this year and was chosen by Taymour as a tongue-in-cheek warning about the perils of her socially-driven theme. “Be you, be different, be fine,” said the designer to close. “Just know that too much social media can turn you into a monster.”