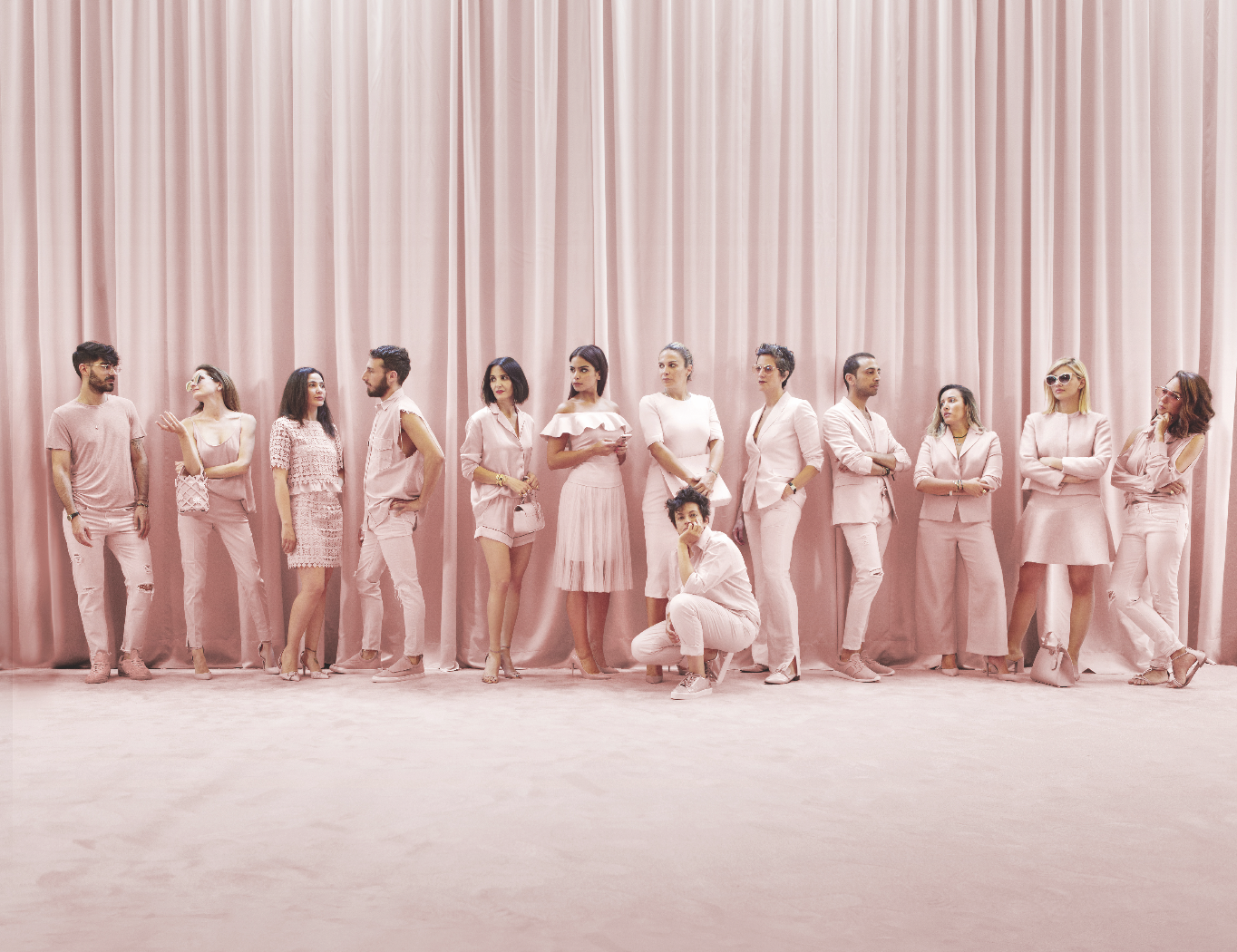 [B]eirut born and based visual artist, video director and creative director Eli Rezkallah founded Plastik magazine in 2009, as Lebanon was slowly recovering from the 2006 Israel-Hezbollah war. “I don’t quite know how to describe it,” the 31-year-old says, “but it wasn’t very colourful and you felt like everyone was tired. There were a lot of young people my age here who hadn’t left and everyone wanted to do something, but only a few knew where or how.” The only option for the creative community was commercial work, which catered to the mass Middle Eastern audience. “Yet in Lebanon we’re not like that; we have much more freedom. So I realised that if I wanted to do something that would speak to me and people like me, I needed to create my own platform. It was very innocent when it started.”

Nine years on, Plastik has grown from a grassroots zine to an internationally recognised publication and commercial studio – Plastik Studios – that has seen the likes of Miley Cyrus and Paris Hilton grace its covers, and has helped make important inroads for young creatives and the LGBTQ community in Lebanon. Eli no longer thinks of it as a magazine, but rather is focusing on creating a self-sufficient platform and brand, supported in part by creative commercial projects – he himself shot the last two global campaigns for Kipling, who found him on Instagram and fell for his dark yet beautiful and surreal aesthetic.

Having studied and worked in Canada, London and the US, Eli now splits his time between Beirut and NYC, where he spends three months of the year. He is currently working on launching Plastik Studios overseas, where he could continue his commitment to championing talent and his version of “silent activism”. 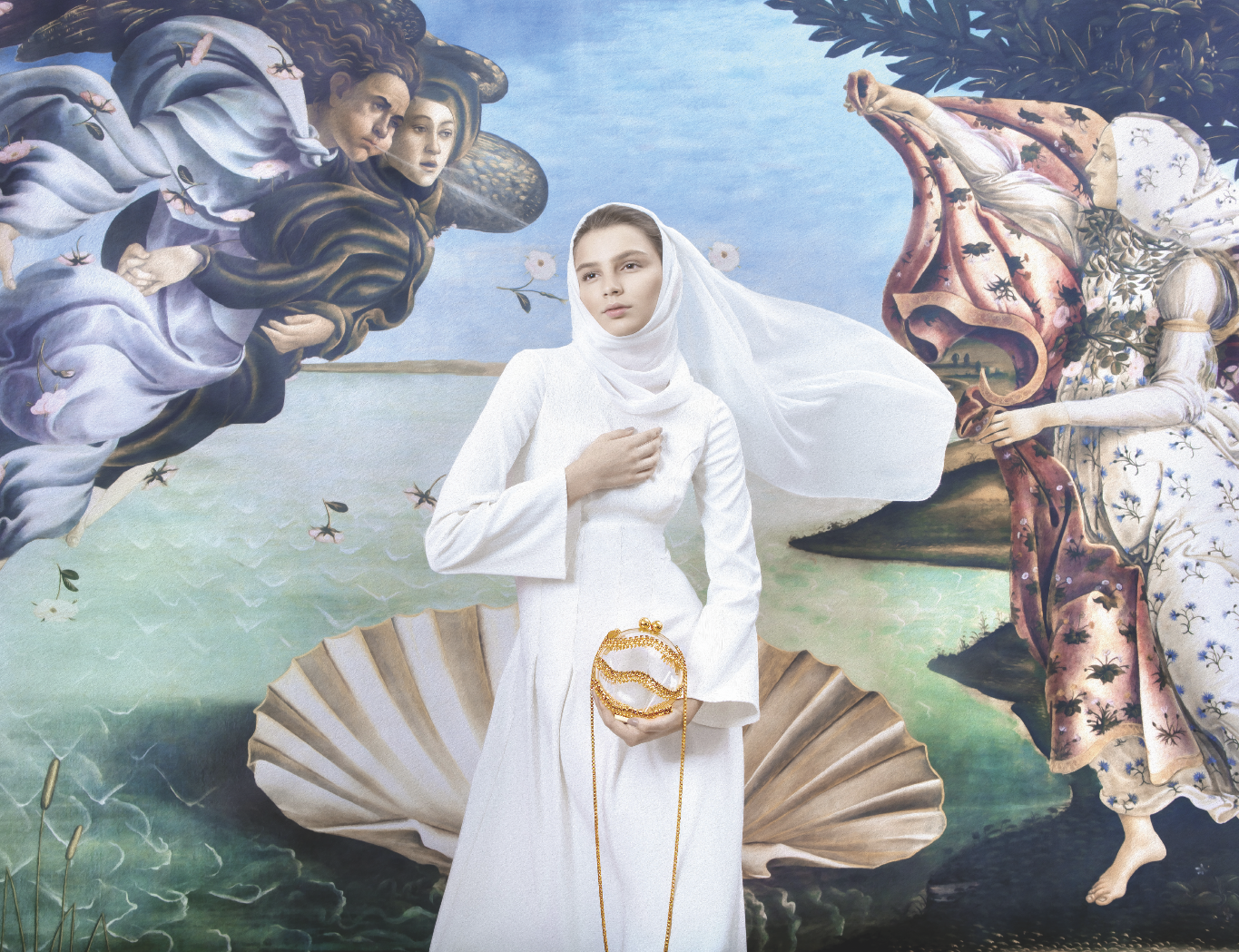 Why the name Plastik?

Because everyone sees the Lebanese society as plastic “with a c”. If you look at it with, let’s say a flat eye, then you might think that everyone is plastic in Lebanon considering how much attention they pay to their appearance. But what people don’t know is that there is more to it. Having grown up in the early 90s in Lebanon in a secluded gated community, we were not affected by the war physically, but we knew it was happening in our country, outside the gates. We could not go out much, so we had to create our own lives in that space. My mom and her friends were always dressed to the nines, pretending to have a normal life. They always made sure to look great, but at the same time if you took a closer look at their eyes you would always see that sense of dread. They were pretending to have a normal life, but it was really like a mini life. So they’d look great and pretend that everything was okay, and they were doing it as a defence mechanism. And that’s why I called it Plastik with a k; it’s my own version of Plastic.

Do men in Beirut also have this preoccupation with looks?

Increasingly yes. But I’m more interested in observing women. I don’t like testosterone, so I don’t spend much time analysing men.

Do you feel there is equality among the sexes?

Unfortunately, not. In my opinion our Lebanese law does not protect women or treat them equally. In a nutshell, it’s a long fight that my generation is fighting. 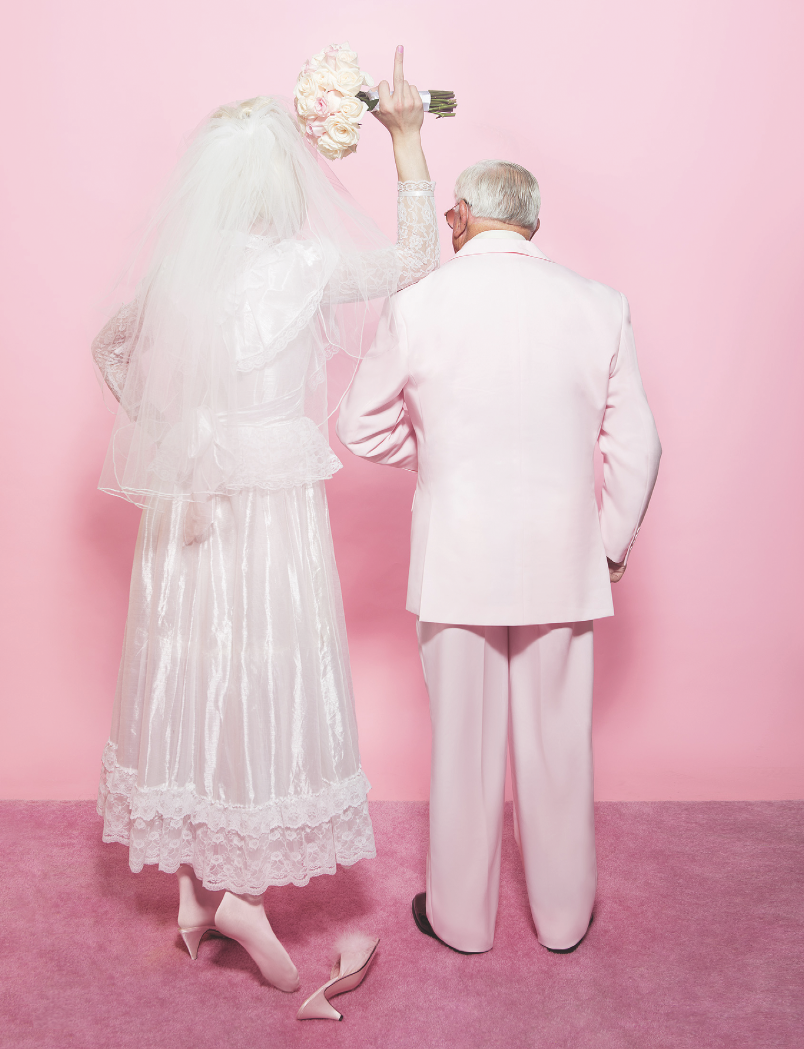 What changes have you seen in Lebanon since you started Plastik?

Nine years ago the general mentality was that the further you were from the city the better you were as an artist, but now local talent is being embraced. There’s more awareness that talent shouldn’t have a nationality or belonging. I’d like to think that when Plastik happened it opened up a space for the younger generation to think that working in this creative industry is possible.

And are people more accepting of the Plastik aesthetic?

The general audience has gotten more interested in the Plastik aesthetic with time, and that has a lot to do with the rise of social media, which made art more accessible to the masses. People were quite stuck up with aesthetics and concepts and wanted something really safe all the time, but after social media platforms, like Instagram, they realised that it doesn’t really work anymore – they realised that you need something smarter, more cultural, something that tricks the brain, that speaks to the masses but also that artists and people like us can appreciate at the same time.

Has social media opened things up for Lebanon?

I’m the biggest living example. I always victimised myself for being in Beirut, as I felt it was too small for my dreams and that if I lived in a city like NYC or London I’d have bigger opportunities. But then two years ago I got a message on Instagram from Miley Cyrus, who I didn’t know at the time, asking me to do something with Plastik. Only a month later she was on the cover of the magazine and we were celebrating with her in LA. And that happened just because she liked the aesthetic of the magazine on social media – she didn’t care where we were located. This is the biggest proof that it doesn’t really matter where you are anymore; you just have to put out good work and eventually the right people will see it. 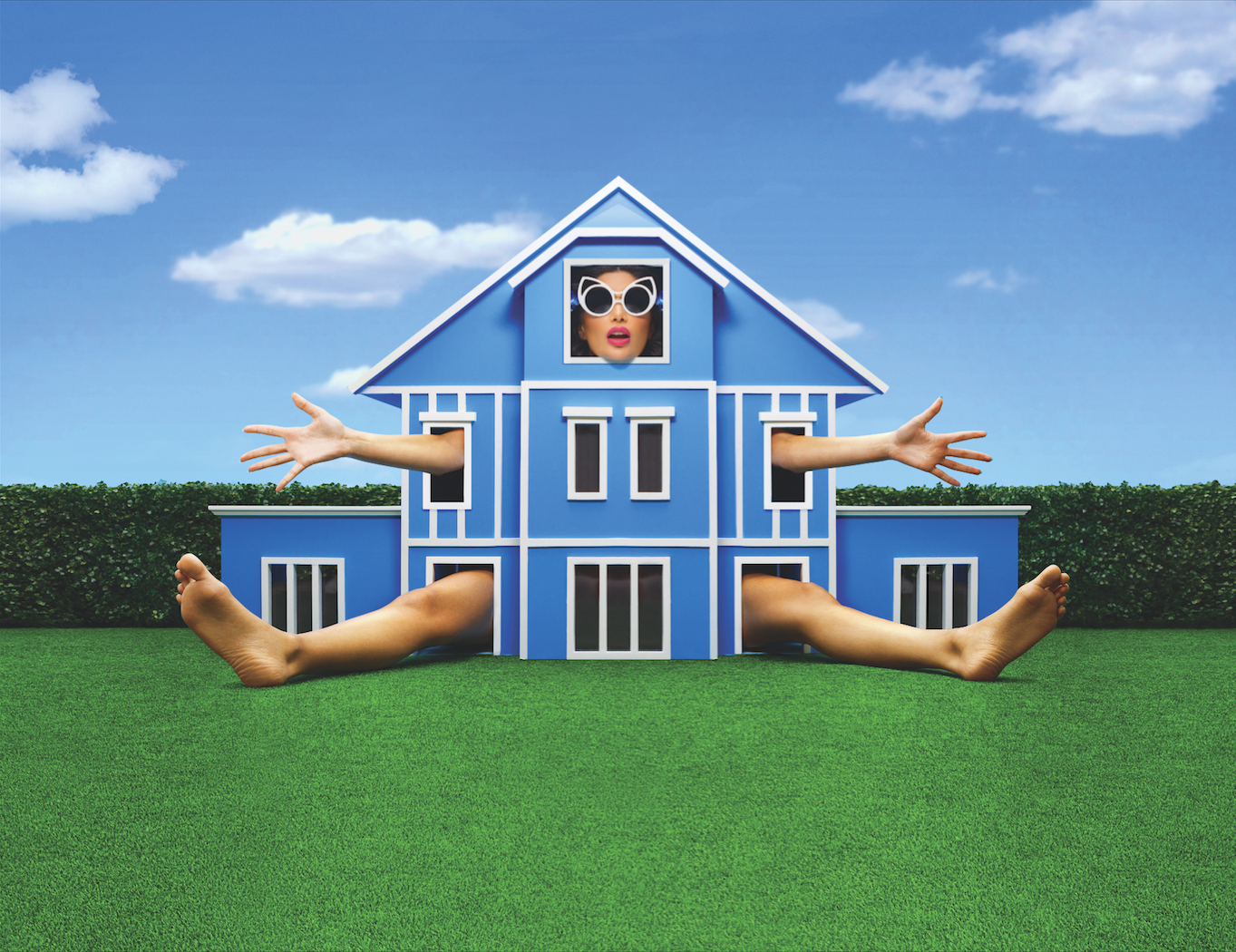 You say that Beirut is liberal, but your work is quite provocative and sexual. What’s the response like?

Are you asking me this question because you think it’s sexual or because it’s produced in Lebanon? I don’t like to provoke; I don’t function that way. But I’m not responsible for how people perceive my work. I’m personally comfortable with nudity, so I don’t see it as something shocking. I just work on concepts that I think are interesting. If nudity happens to be part of the concept then so be it. In my circle people are like me, so I rarely see a reaction of shock when it comes to my work. That being said, I make it a point to stay as far as possible from religion in my work as it is a sensitive subject in the Arab world and I don’t think it’s necessary to provoke when it comes to that.

So you censor religion to some degree?

No, not to some degree – completely. I once featured an artist in Plastik, Chris Bracey, and in one of the images there was a statue of the Virgin Mary with a neon gun in her hand, and that was my first [introduction to] how things work here. I was asked by government officials to withdraw the magazine from stands and sign papers stating that I would never tackle religion. I tried explaining that it was the work of another artist and not mine, but they wouldn’t understand, so my lawyers asked me not to waste time explaining and just agree. And I’m fine with it; I don’t need to feature religion. As I said, I don’t rely on provoking. 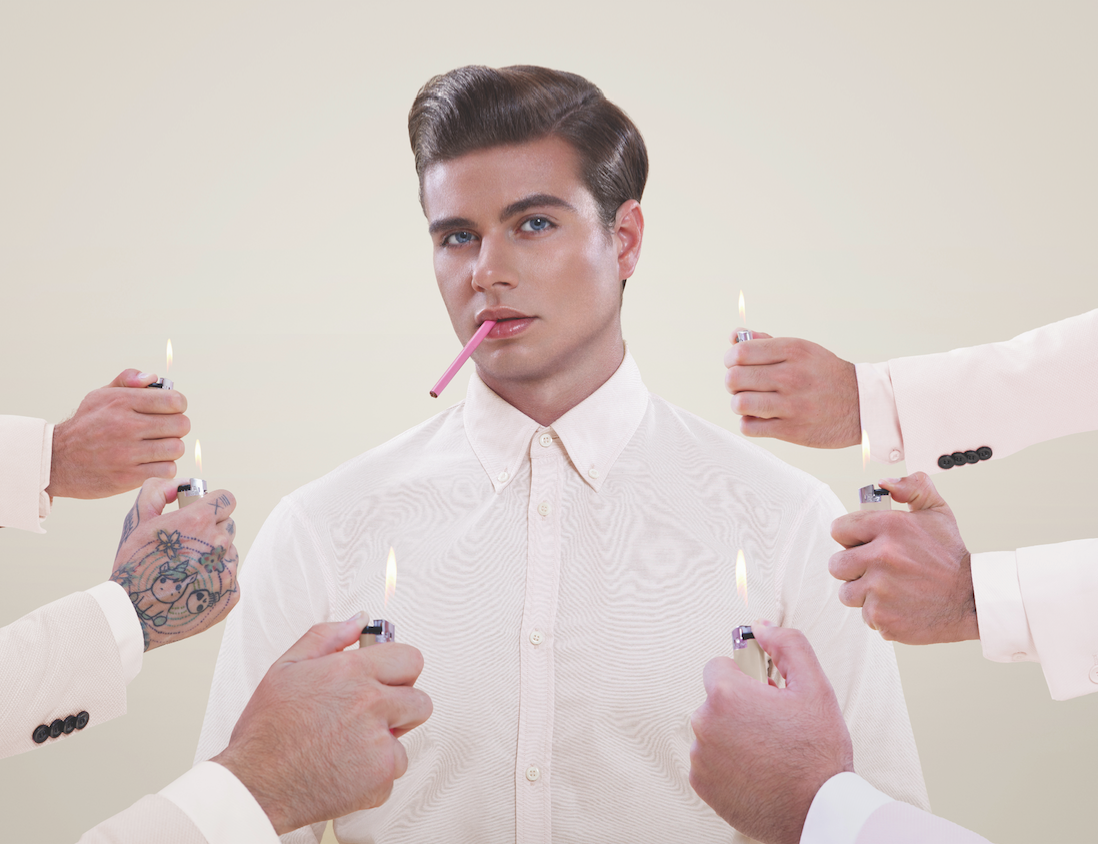 Is there a large LGBTQ community in Beirut?

Yes, for a country that is in the Middle East our community is very large and the society is more and more accepting in general as well, which is quite refreshing.We as Plastik had two international drag queens perform for the first time in the Middle East earlier this month and that’s our way to contribute to the community. Also the local drag scene is getting better by the day, which is so exciting.

Do you see your work as political?

My work is a visual depiction of women in denial and the measures they take to escape reality. This comes from me observing my mom trying to create a perfect life as our country was going through a war. Although the outcome may not be a political statement, the core of where it comes from is due to a political situation. If you consider that political, then yes, maybe.