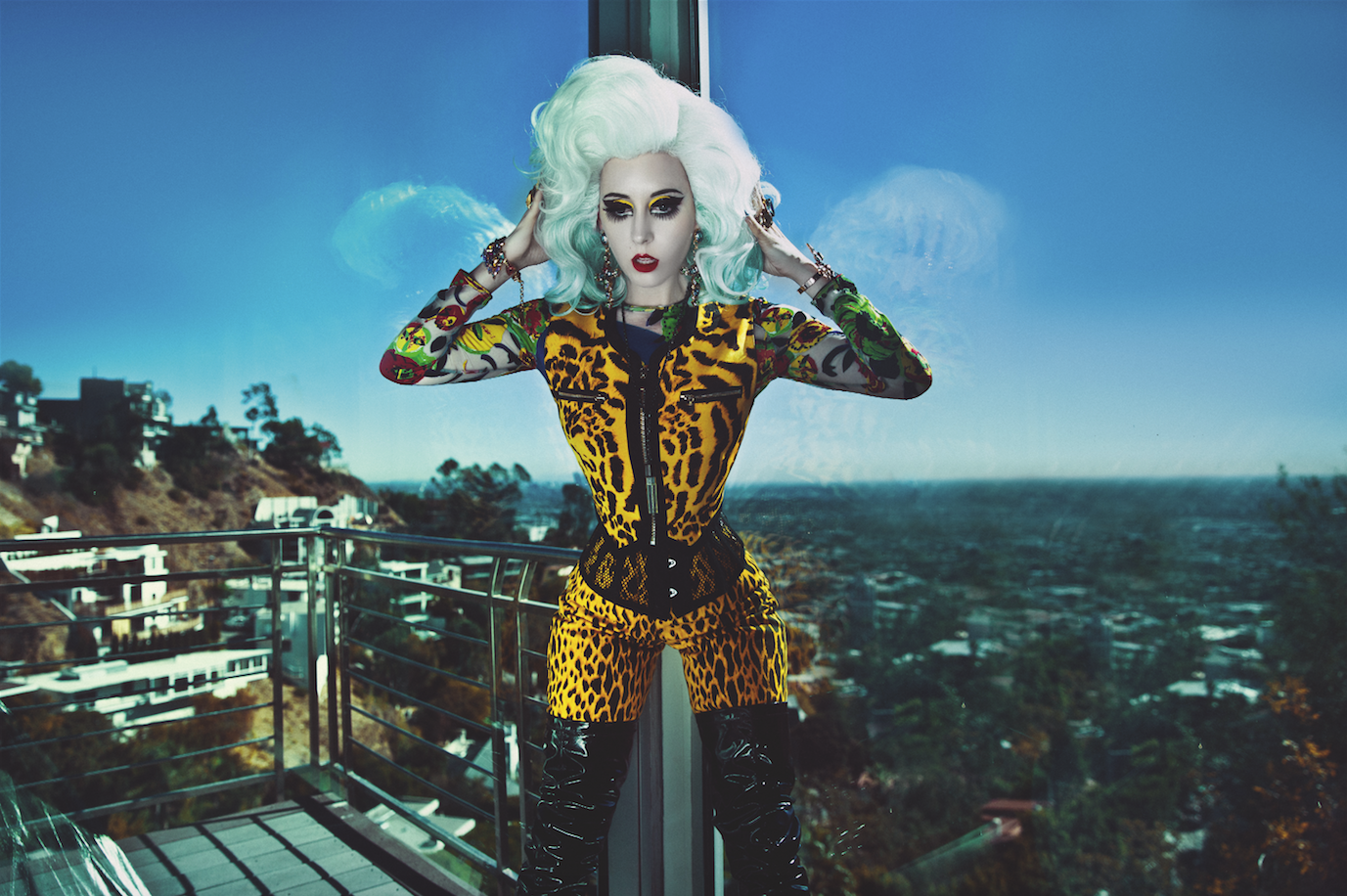 [C]hances are you’ve probably come across costume designer, stylist and director Bea Åkerlund’s work. Based between Stockholm and Los Angeles, she’s worked with a laundry list of the music industry’s most famed names from Lady Gaga and Madonna (on that Super Bowl performance) to Beyoncé and Britney Spears. With her long jet black hair and always-red-stained lips, Bea’s styling is as distinctive as she is.

It was while growing up in Stockholm that Bea discovered that she had a different vision to those around her. Realising that a society in which everyone wore the same thing wasn’t one she wanted to be part of, she set out on a mission to see the world, starting in the City of Angels. It was in LA that Bea found herself. “I came from a small country where everyone followed the same fashion and ideas. It wasn’t that standing out wasn’t acceptable there, I just found it easier to be who I wanted to be when I moved to LA. It was okay to be a different type of individual. I met people from very diverse backgrounds, which opened my eyes to a number of different cultures.”

Aside from the people, Bea wholeheartedly embraced the eclectic array of thrift stores, vintage boutiques and garage sales on her doorstep – something she’d not encountered before – as a vehicle through which to service her desire to dress up as a different person, or character, each day. According to her, this appetite can be attributed to her teen years as a club kid, during which she fronted a different costume nightly. “In high school I was the girl that had the most clothes. All my friends used to come and borrow my stuff. I always had a passion for shopping and dressing up. I was always very colour coordinated; that’s one of the best style tips ever: if you don’t know what to do, wear one colour and you’ll look quite cool. I had, like, 20 wigs and I would wear these crazy costumes every day. I quickly discovered that styling was a real job and something I thought I could be good at since it came naturally to me. Then I realised that it was something you get paid to do!” When asked how people perceived her outfits back then, she sums it up in one word. “Memorable,” she laughs. “If I got bored I’d just whip up something crazy and wear it to the supermarket. Life was more fun that way.”

Bea’s first styling job was working on a drag queen calendar – dressing the cast from rails filled with pieces from her own wardrobe – but it’s her first Rolling Stone cover in 1998 with the Beastie Boys that she values as her most memorable. “I was flown to New York, and at the time I felt like I’d made it, because my career goal back then was a Rolling Stone cover. I’ve always felt a strong connection with the music industry and how fashion drives the characters that create such a lasting image.” Since her debut cover, Bea’s positioned herself at the top.

When I ask her how her aesthetic has changed over the years, she says it’s remained pretty much the same. “The only thing that’s changed are my resources, budgets and my twenty plus years of experience in the industry. I’m the same girl as I was when I started out, but I’ve probably matured a little bit. I’ve also turned more goth – because I married one – so my style is darker than before, but that colourful girl is still inside of me. The only difference is I can flex my wings and do more epic work.”

When it comes to Bea’s creative process, it’s a highly visual, intensive one that starts as an idea in her head and plays out as a series of detailed, large-scale mood boards. “I never learned to draw so that’s always been my handicap, instead I have to refer to photos to express what it is I’m trying to say,” she explains. “Sometimes it takes 20 to 40 photos for me to say what I’m trying to say. There could be one image of a shoulder I like, one of a colour, one of a shape, and so on. I get really gritty about what I want.” 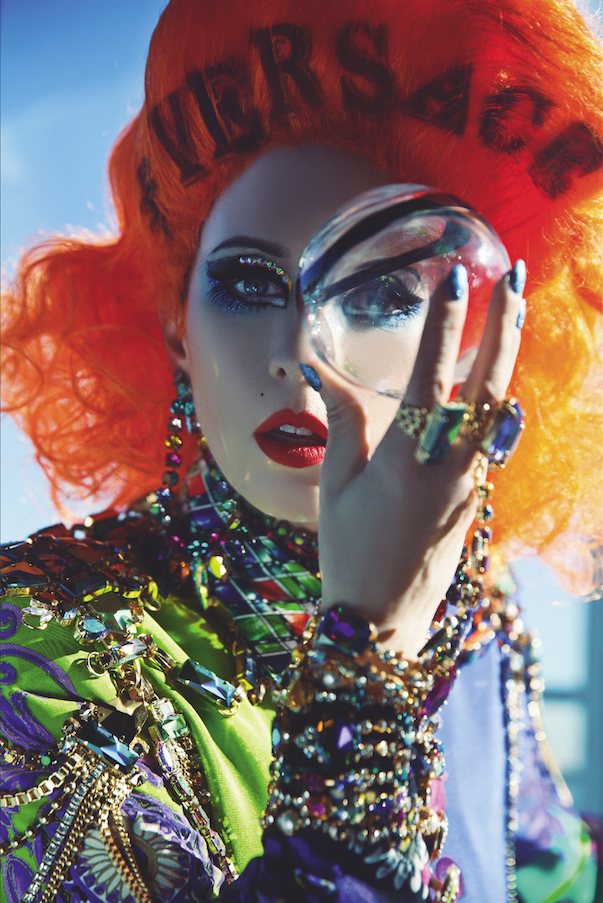 Once the initial idea is in place, Bea likes to immerse herself deep in her subject, starting with extensive research. Her recent work with Swedish metal band Ghost is testament to this. “I like to get to the core of an idea. Ghost have this religious undertone, but I’d never really known the names for the traditional garments worn by a priest, so I started to really get to the bottom of each piece to learn what it meant. Then I put my own spin on that. I got half of the costumes made in specialist religious stores, then I hired fashion designers to create something new. I always like to study and understand the realness of where my subject is coming from – the customs, the country, and so on.”

One of the designers working on the project in question is new-gen London womenswear talent Dilara Fındıkoğlu. “I like her aesthetic as it’s very close to mine,” says Bea, who’s worked with Dilara previously on a look for Madonna’s performance at the Leonardo DiCaprio Foundation’s 4th Annual Gala in Saint Tropez in aid of climate resiliency. “Dilara’s ‘Garden of Eden’ suit was my inspiration for that entire performance. We had 20 racks of clothes but she ended up wearing that suit. That was my vision.”

Bea’s most iconic collaboration to date is arguably with Madonna for her Super Bowl medley performance in 2012. “It was a milestone in my career and the experience satisfied me creatively for a long time. Dressing 450 people on live TV with an audience of over 100 million – that’s not something you do every day. I’ll probably never do another job like that ever again because it was so highly demanding and the fact that I did every single person was almost inhuman.” When I ask how she managed such an impossible task, she just laughs. “You have to be really, really organised, that’s where my mood boards come in – they help me keep the idea in focus, so I can build it to reality.”

#Fendi much ? @nickiminaj Fashion direction by me ..... thanx to my team ?? tap for credits ??? #nickiminaj #styledbyb

Bea surrounds herself with powerful women, from Dilara and Madonna to her long-time collaborator Lady Gaga, and that’s before we even mention her collaboration with Queen B, styling her videos for “Partition”, “Superpower”, “Pretty Hurts”, “Haunted” and “Lemonade” – yes, that yellow dress. While it could appear that the stylist’s sole purpose is to make women look beautiful, for Bea it’s about imbuing the wearer with a sense of power. “That’s what tells the story for me. It’s all in the details and the power to accessorise.”

Each project is a stepping stone in Bea’s personal journey. “I feel my work to date has shaped me to become the female creative I want to be. I’ve just started and have so much more to give.” But when it comes to the woman that inspires her the most, it’s Madonna. “She’s the one girl I’ll forever be grateful for. She’s smart, loyal and forever inspiring to me. She’s a force to be reckoned with. She’s taught me a lot and made me a better person and stylist from having the experience to do so many projects together.” Bea also places Grace Jones on a pedestal. “I love and live for her. I’m inspired by her fearlessness in fashion – she just does what she wants and that’s my motto in life. Hopefully one day we can create magic together.”

Aside from styling, Bea has turned her hand to directing. “I’m married to the best director on the planet, Jonas Åkerlund, so I’m fortunate to have learned a lot from him. I’ve spent countless hours watching him do his edits and helped him with the production of some of the projects we’ve collaborated on. I know what I want when I want it, and I have a very clear vision, so directing is not foreign to me – it’s just another way of creating.” She also co-owns a PR showroom, The Residency Experience, through which she champions emerging designers and artists. “I’ve made it a go-to place for cool and interesting fashion from around the world. It’s very exciting for me to source new designers and see them bloom and expand into big brands.”

As of late, Bea has translated her creativity into another new discipline: furniture. “I don’t like to pigeonhole myself to only doing one thing because that gets boring,” she says. Thanks to a collaboration with IKEA, Bea will be releasing her OMEDELBAR collection this March in stores worldwide. “It’s been a really fun ride. Furniture, styling – it’s all the same, it’s just your sense of creativity and approach, but in a different way. I started by figuring out the core thing that represents me. The collection is based on my red lipstick, as I don’t leave the house without it. I also wanted to hone in on the fact that I’m a stylist, so I tried to make a lot of the pieces style-led.” Think hat- and shoe-shaped vases and lamps, a top hat-shaped bowl, and lip pillows that are Bea Åkerlund through and through. “This project was a really fun challenge for me. With every job I do I like to push the limit a lot. I thrive from the challenge of the impossible.”