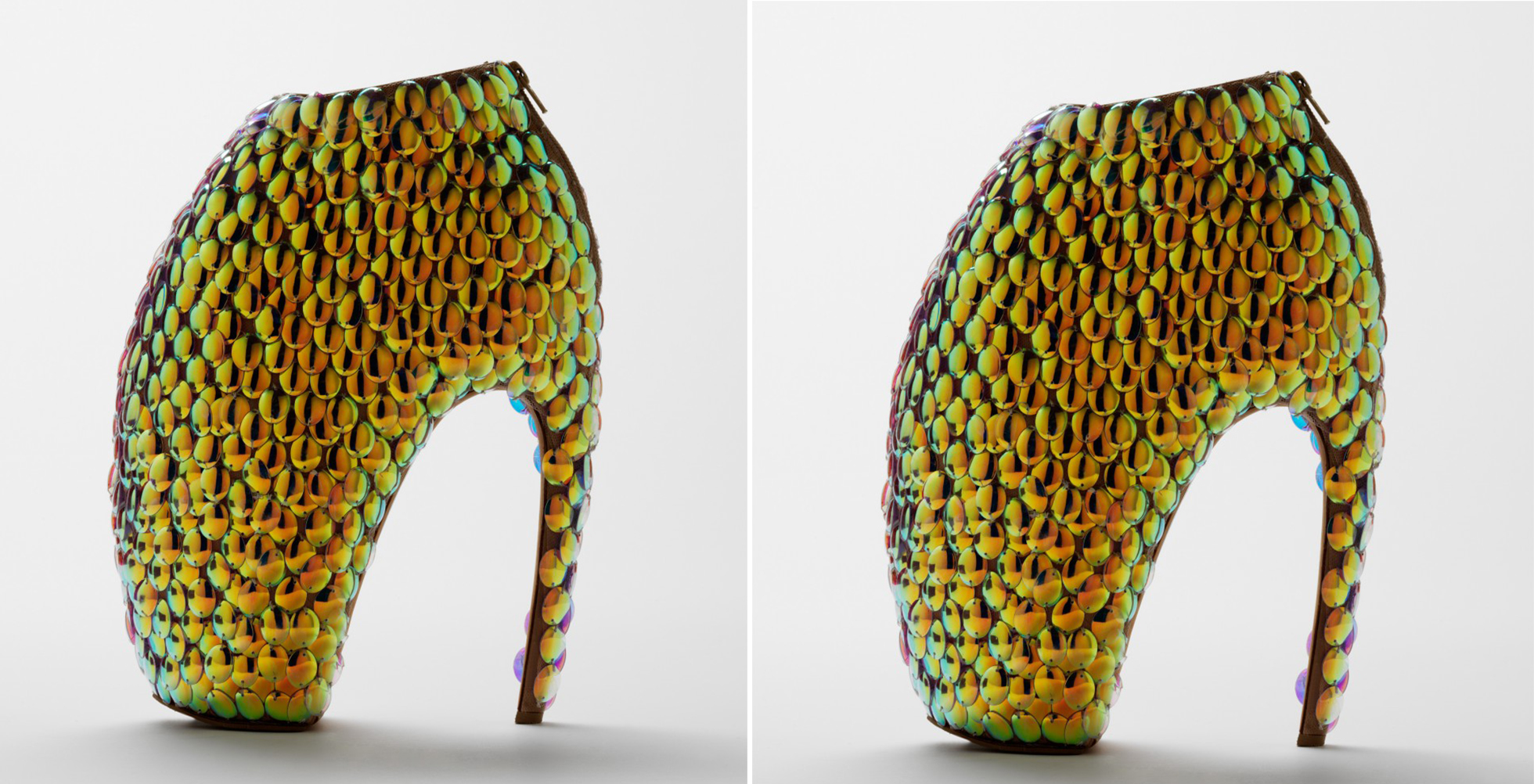 [M]anolo Blahnik described her as the “future of footwear,” she’s been nominated twice as accessory designer of the year by the BFC and launched her own label in 2003: Georgina Goodman is an underground icon to know. Having begun her career as a fashion editor at i-D magazine during the late 80s (“I knew Edward Enningful when he was a teenager, he would be sitting at my kitchen table asking me about how to get into fashion”) she then later undertook an MA in womenswear footwear at the Royal College of Art. Fast forward to Paris, 2007. Goodman was in her showroom when a Gucci group headhunter pops in to see her. “Lee McQueen would like to meet you…” This moment was a defining point, and she went on to create iconic shoes for his catwalk collections up until his death, including McQueen’s famous ‘Armadillo shoe’ part of his very last collection – Plato’s Atlantis – to heels carved in the form of angels. Eight years on, Georgina talks exclusively to HUNGER about her Cinderella story, the art of collaboration and poignant memories of McQueen…

“Fashion felt like the only thing I wanted to do when I was at school. I’ve still got clothes I made for my dolls, they’re hilarious. I applied to Central Saint Martins and I didn’t get in – I just thought my whole life was over. So I just moved up to London when I was 18 and started working. It was kind of different times [then] around 1986 – you could literally go to a club and meet someone and start a job the next day. It was much more tribal. If you dressed right people would come talk to you because you were ‘in the gang’. There was this club Taboo and everyone went there and you could see this person and that person. I was this wide-eyed girl from Essex who did not fit in. Magazines were where we got all our inspiration – it was a bible. It was all about looking individual; there wasn’t that sameness that there is now. 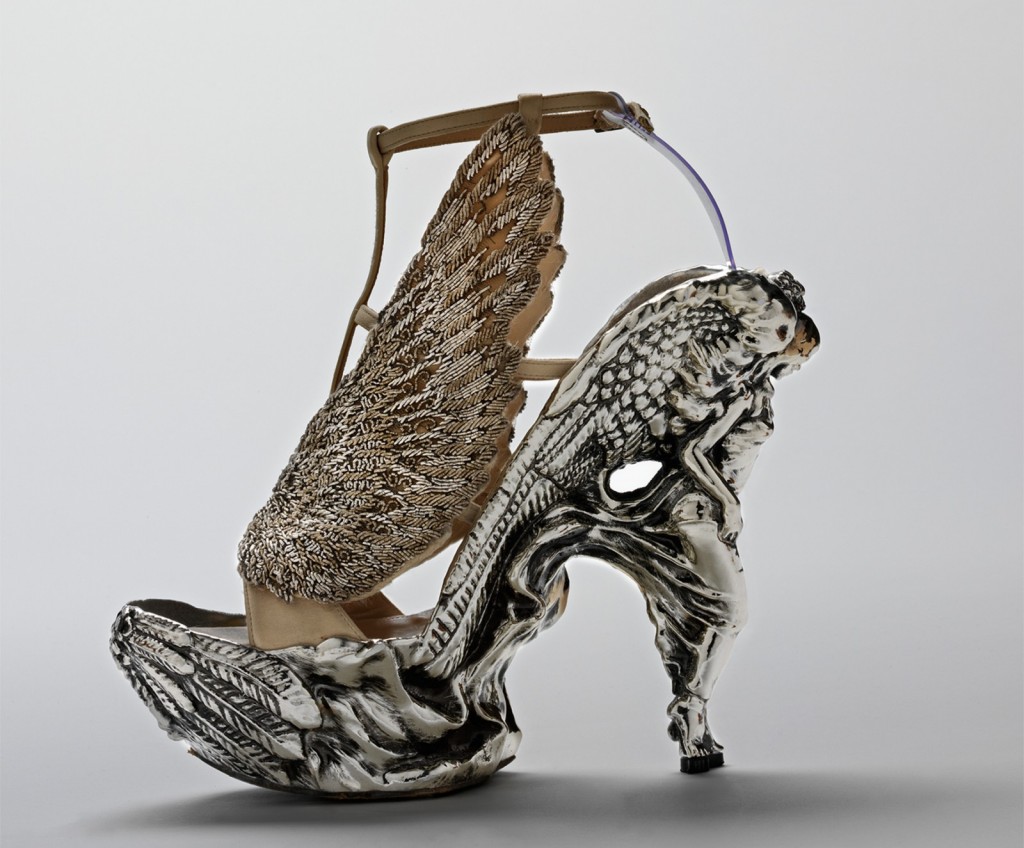 I then went to work at i-D [as co-fashion editor] when Dylan Jones was the editor and Caryn Franklin was fashion editor. It was just amazing – everyone from Judy Blame to Nick Knight would be in and out. Edward Enningful was Simon Foxton’s assistant. I knew Edward when he was a teenager, he would be sitting at my kitchen table asking me about how to get into fashion. I was there on and off for five years. Whilst I was at i-D I really loved shoes and when I was styling it was all about the shoes – they came first. Terry [Jones] did a series of documentaries and came to my house and I said “Terry, do you know I have about 200 pairs of shoes.” This is when I was a little assistant. Later, I worked at Elle magazine as a contributing editor and I was working on their 10th anniversary and doing a series of interviews called ‘Icon to Icon’ – nightmare! It was a hideous job. And my editor said to me, “George, do you really want to be a journalist?” And I was like, “no – I’m much more interested in fashion.” And she said to me “Yes, but you’re always in the fashion cupboard rifling through shoes. Why don’t you become a shoe designer?” I didn’t even know you could really do that.

I went to talk to the head of the school at Cordwainers and said I wanted to be a shoe designer. She said, “it’s not glamorous! It’s hard work! It’s graft!” And I thought, “well, I could do that.” So I went back to college when I was 29 and did a three year BA and loved it. My mark for my BA was the highest they’d ever given. I was really a swat – I was older and more professional I think. I did a two year MA at the Royal College of Art and Manolo Blahnik was part of the external teaching staff and he came in and set a project. He was amazing, he’d give me all this advice and was on hand to help. When I finished the MA I was pregnant and got offered a job in Paris at Dior with John Galliano and I remember thinking, “I don’t know if I can take this.” I had just had a baby. What I really want to do is set up my own business. So I just took a lease out on a shop and starting making bespoke shoes. Simultaneously to that, Manolo was having a retrospective at the Design Musuem. He had crowds of press around and saw me and said “Oh my god, step aside, don’t talk about me – this is the future footwear: Georgina Goodman!” It was a very Manolo thing he said but of course that really was such an amazing thing that happened. The next week Melanie Rickett called in my shoes to put on the front cover of Vogue with a Jonathan Saunders outfit and Georgina Goodman shoes. The first person to ever call the phone was Manolo to say “oh Georgina, keep doing your nice shoes but elegant, elegant…don’t do those horrible platforms!”

Then within two years I started to do consultancy. I worked with various different designers. Then I was in Paris and this woman walked passed and said “I’ve come to see you.” She was a headhunter for the Gucci group and she said “Lee McQueen would like to meet you.” I had said in another interview, that if I could write down another designer I would like to work with it would be Lee McQueen. He was such a massive influence on me all throughout college. I saw him around at shows and stuff and while I was at i-D on the other side of it [but] he wasn’t my mate or anything. He was so great when I met him though – what you see on the tin. Really charming, charismatic and like a live-wire. He was always exciting to be around – like what is he going to say?   I really liked that – you knew exactly what he thought because he just said it. He said “can you draw?” I said “yeah” and he goes “go on then…” So I drew. I would sit opposite him and he’d say “I want something a bit like this…” And he’d give me a reference like Gaia and sometimes I’d have no idea and go off and search it. Thank god for google. I worked with him for three years and over time I would get it, there was certain references we would all know. 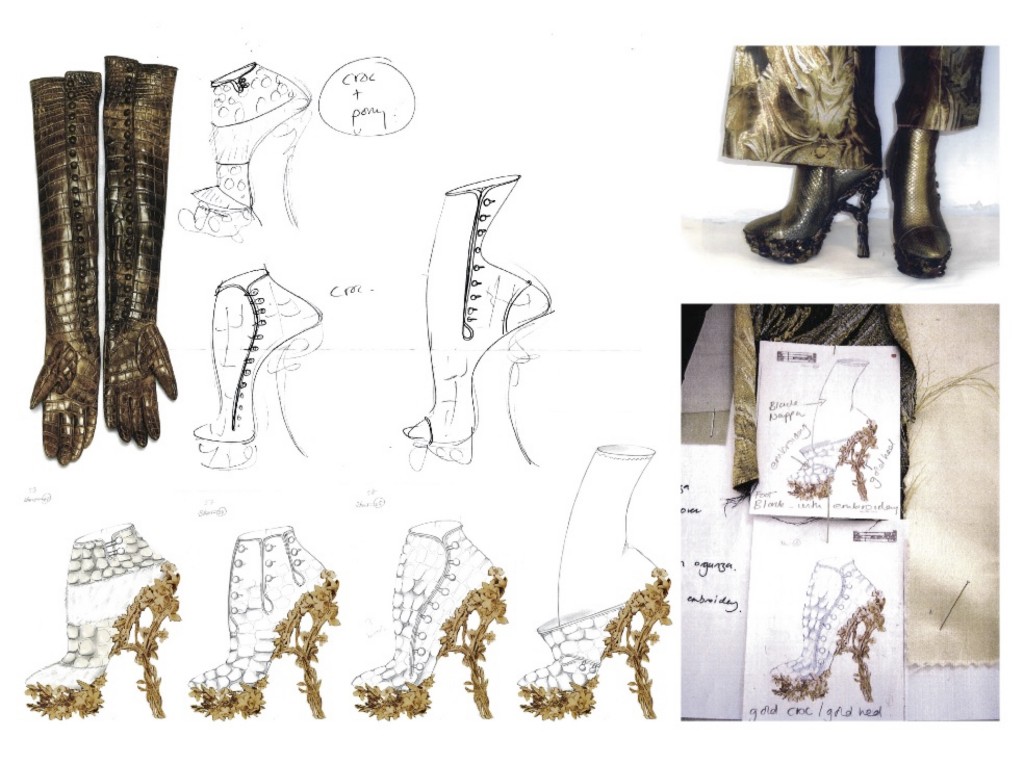 I would prepare more than stipulated because he might change his mind. So I’d normally bring specific drawings or I’d look at the shapes on the board for the collection he was working on and speak to Sarah [Burton] and Katy [England] who’d tell me what he was working on. The first season I was at McQueen I was working in my studio and got a call saying, “we’re biking you something – Lee wants to show you this!” I got a polaroid biked to me of a piece of soft leather draped around a girls leg and a heel that looked like a horn with big, black pen writing on it saying something like ‘HORN HEEL.’ There was always a big black pen. There was a language going through everything that Lee did. Part of a job as a footwear designer is to interpret what they want in their collection. The Armadillo boot, from Plato’s Atlantis? That shape evolved from a technical point of view but [it] was all referenced by him. The brief I was given was “I want the girls to look like the girls are on ballet points.” And he’d say stuff like “I want it to feel like the girl has just emerged from the water” I’d draw with him sometimes and he’d say “yeah, I like that one!”

When Lee passed away I felt an incredible sadness. All of us who worked with him did. He was just so exciting to be around – he could literally just create a dress with a big roll of fabric, some pins and scissors. It was really Edward Scissorhands. He said something to me which has really stayed with me as a designer which is “George, you need to access your dark side – I don’t like anything too girly. It needs to be strong.” I’m not necessarily that person but I was able to access that because he encouraged it. You might get a real hard time but you know that he appreciated it in his way. He made you want to do the best you could.” 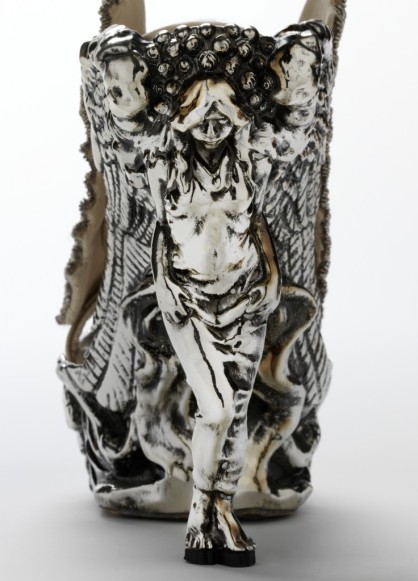 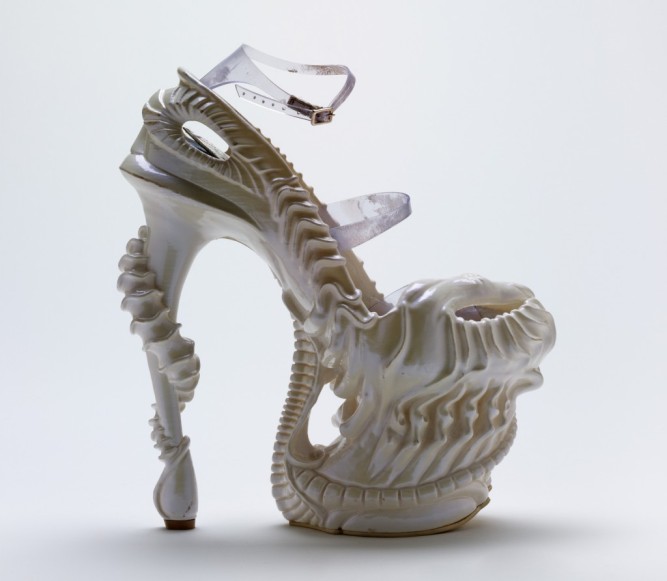 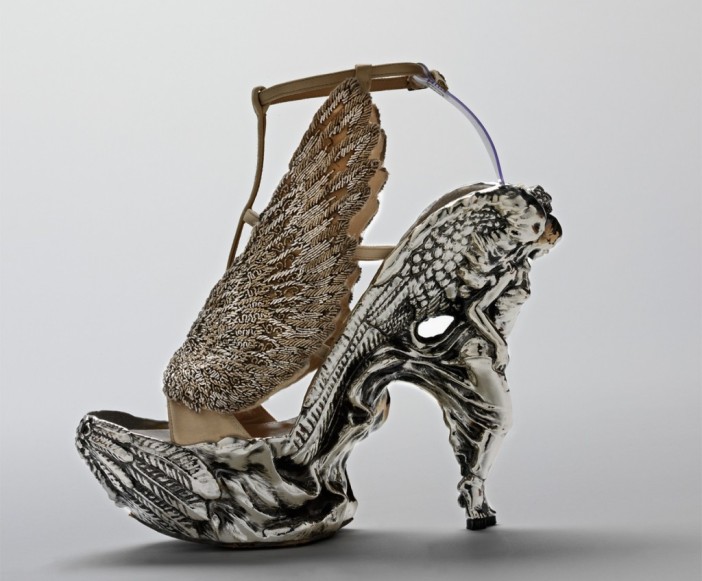 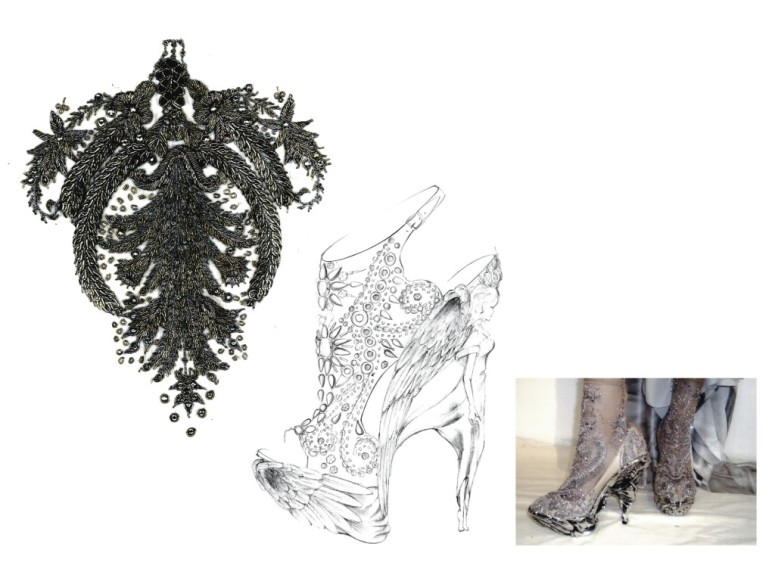 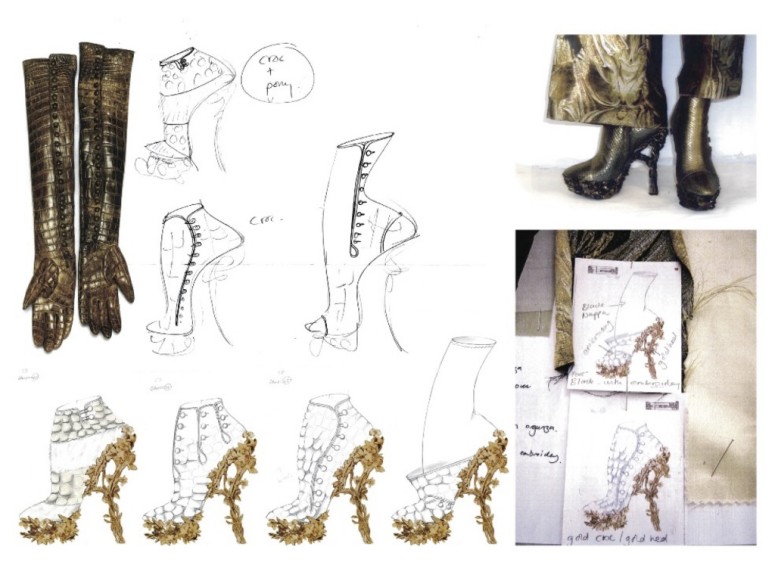 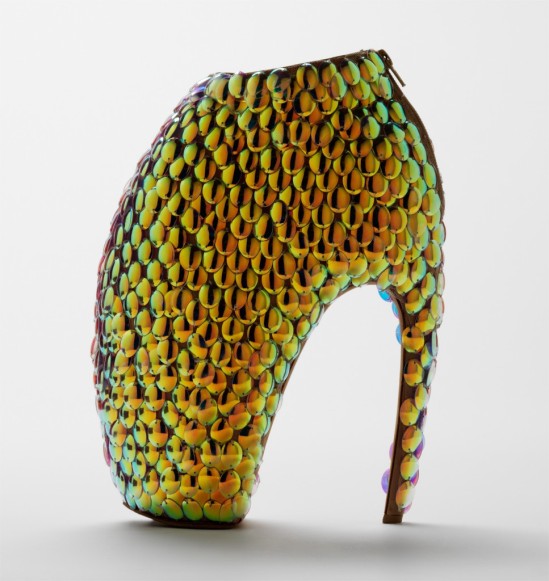 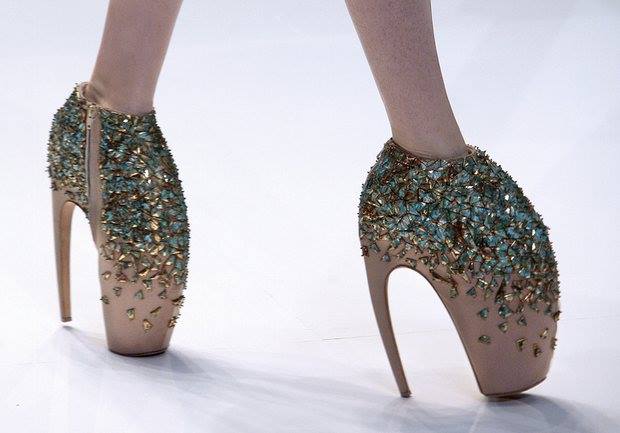