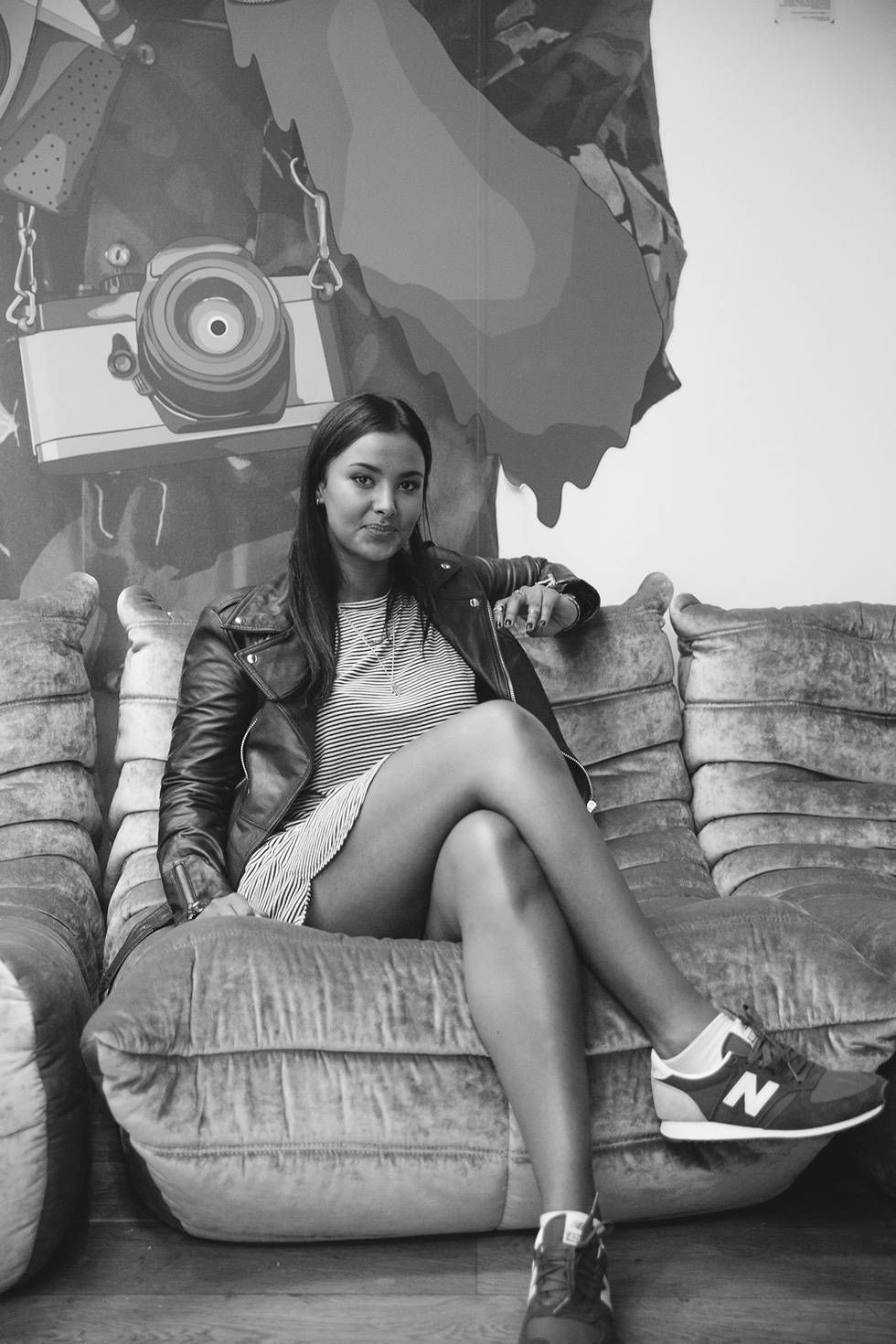 [S]he’s the newbie over at MTV with the name that leaves those that she interviews guessing. Pronounced, according to your accent as either Jam-a or the container it comes in, Jar-ma, Maya Jama has a penchant for baked goods and Brazil and, refreshingly, has plenty to say for herself.

A Swedish, Somalian and Bristolian upbringing has undoubtedly led to a culturally and geographically diverse childhood and it’s not long before you realise that James packs a punch both before and after she starts our conversation. We find out why she he want that cake, cake, cake, cake…

What are your memories of Sweden?

Sweden is beautiful from what I remember. I would visit once a year, every year up until about three years ago. It’s clean and where my grandmother lives is a forest by the sea is the most beautiful place ever. You walk around and see a lot of blondes. When I’m there I feel like the odd one out!

What was the dream as a kid?

I always wanted to be on TV. When people asked “what do you want to do?” I’d always say “I want to be on the telly.” I wasn’t even sure what for. The thing that sticks out was watching Davina Mccall – she’s my ultimate idol. I love that she’s not too serious, she’s the perfect example of someone who’s done well and she still has a laugh. She cares about people too, if you watch her interviews she connects with them. She’s a people person not just a pretty face on telly and I like that about her.

What’s your story up to now?

I’ve been doing this since I was 16, I’ve never really turned off. In school I did drama I started college in Bristol, then moved to London for my second year. I always had in my mind I wanted to act but I didn’t really know about presenting apart from seeing people on TV and thinking I like what they do. With acting you go to an audition but with presenting I just thought how do you even start? The first thing I did was JumpoffTV. One of the presenters was ill one week so I stepped in. I was in love with Balls of Steel at the time so I brought that in to what I was doing. I would go out and film sketches or be I’d left in a room with a camera. I also got quite far into auditions for Skins but I didn’t get it and that just confirmed that I didn’t want to act, I wanted to be myself, not play a character.

I’ve got a magic wand, what’s the wish for your career?

I don’t actually know yet. If I could give one example it would be my own show like Alan Carr’s Chatty Man. Maybe Jaffa Cakes with Jama? or Maya Jama, Jammy Lass?

You’re the new face at MTV this year, what does MTV mean to you?

MTV is massive, I always remember MTV being around. My Nan even had MTV! I remember watching Trevor Nelson and The Lick and before the days of YouTube it was the place you’d go to watch music and see the charts. Since I started presenting people would ask what’s your dream job and I said within the next five years MTV is what I want to be doing. I found out that I got the job on my 20th birthday, my mum cried and it was the best birthday present ever.

Who makes you laugh?

I love Keith Lemon, my mum hates him, she thinks he’s an idiot but I can’t get enough of him and Jack Whitehall. I like people that aren’t trying to make me laugh or people that take the piss out of themselves. I make myself laugh and that’s really, really awkward!

I carry a photo of me and my brother around everywhere with me. We’re very close, we were only born two years apart. He makes me so proud. He stayed in Bristol when I moved to London so I’ve missed his teenage years. We don’t speak enough!

What’s the best advice you’ve been given?

In life as bad as anything gets it’s not the end of the world and you’re always going to be okay after it. When I was 16 my boyfriend passed away, it was the end of my life as I knew it, I thought I’d never be able to do anything ever again. I was told, “As bad as you might feel now and as long as it takes you’ll never forget but you will move forward”. When a person dies people say a lot of things but that stuck with me. I can talk about it now and I am okay.

You’ve lived in Bristol, Sweden and London where else could you see your self living?

LA, no actually New York even though I’ve not been but I imagine what it’s like. I’ve been to Atlanta and Florida but because I’m not 21 yet I’ve been holding back. I could only get served in Hooters and that was rubbish! I won’t go unless I can go out I’d feel left out, it makes you feel like a child again.

You’re pipped as one to watch, who are your ones to watch?

Sasha Keable, I love her. I was a fan before we met and when we did I tried to act cool, I definitely tried too hard. She’s my friend now, she sang Happy Birthday to me from New York. There are so many young female singers at the moment, FKA Twigs is sick, Sinead Harnett and Jess Glynne obviously. I want everyone to do well there’s enough space for all.

My mum she’s a legend. She’s 39 but looks 12, people can’t believe she’s my mum! I took her to XOYO at 4am and I wanted to go home but she refused. She’s hilarious. She’s very proud too. She’s never put any pressure on me so any achievements I make she just says I inspire her and I think she’s amazing for that. My mum would be jokes on a show. She raps and she’s very proud of it! But the famous person I’d love to interview would be J Cole, Brad Pitt or Channing Tatum just to look at. And Seth Rogan and Ellen Degeneres would steal the show.

What are you Hungry for?

Cake?…Oh in life? Momentum, this is cool I want it to keep going. I want it to carry on. I want to meet people I’m a fan of.