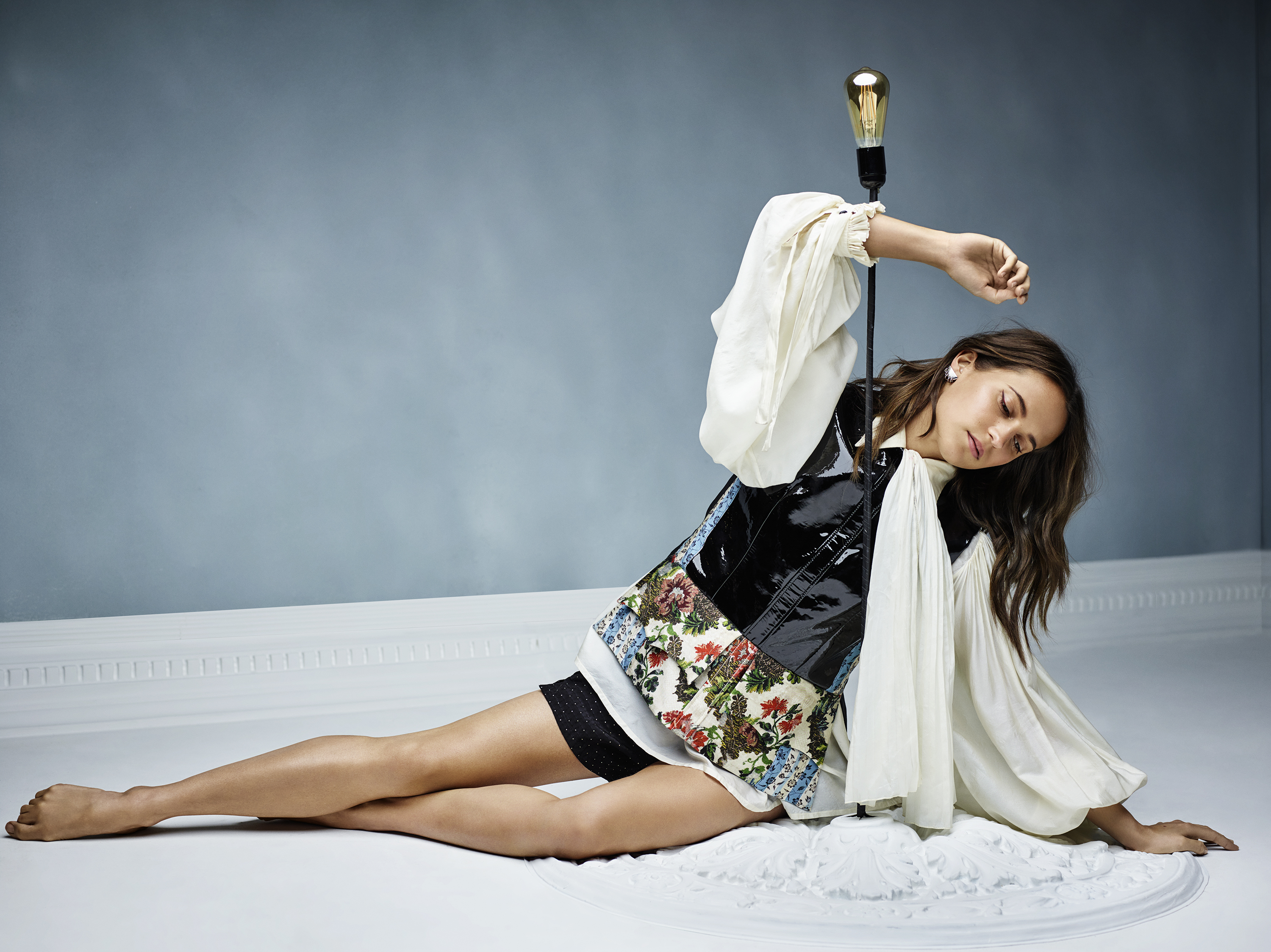 [A]licia Vikander has a mantra. “When things are hard,” she begins, slowly, “I say, ‘Yeah, but it’s not tougher than ballet school.’” Alicia enrolled at the Royal Swedish Ballet School at nine, and danced with companies until she was 19, which amounts to a childhood spent in permanent discipline. “One thing you learn in a school like that, if it doesn’t break you, is that no one does [the work] for you.”

It’s a rather worldly lesson to have internalised as a child, but as preliminary training for Hollywood, you’d hazard the lesson was invaluable. Today, the 29-year-old Oscar winner still has the physical mannerisms of a dancer: she sits, back straight on her chair, legs crossed, occasionally grasping her feet and rocking from side to side. Her first English-speaking role was only “six or seven years ago”, and she speaks slowly and carefully, though it doesn’t seem like the uncertainty of the non-native speaker, but instead a deep-rooted thoughtfulness. 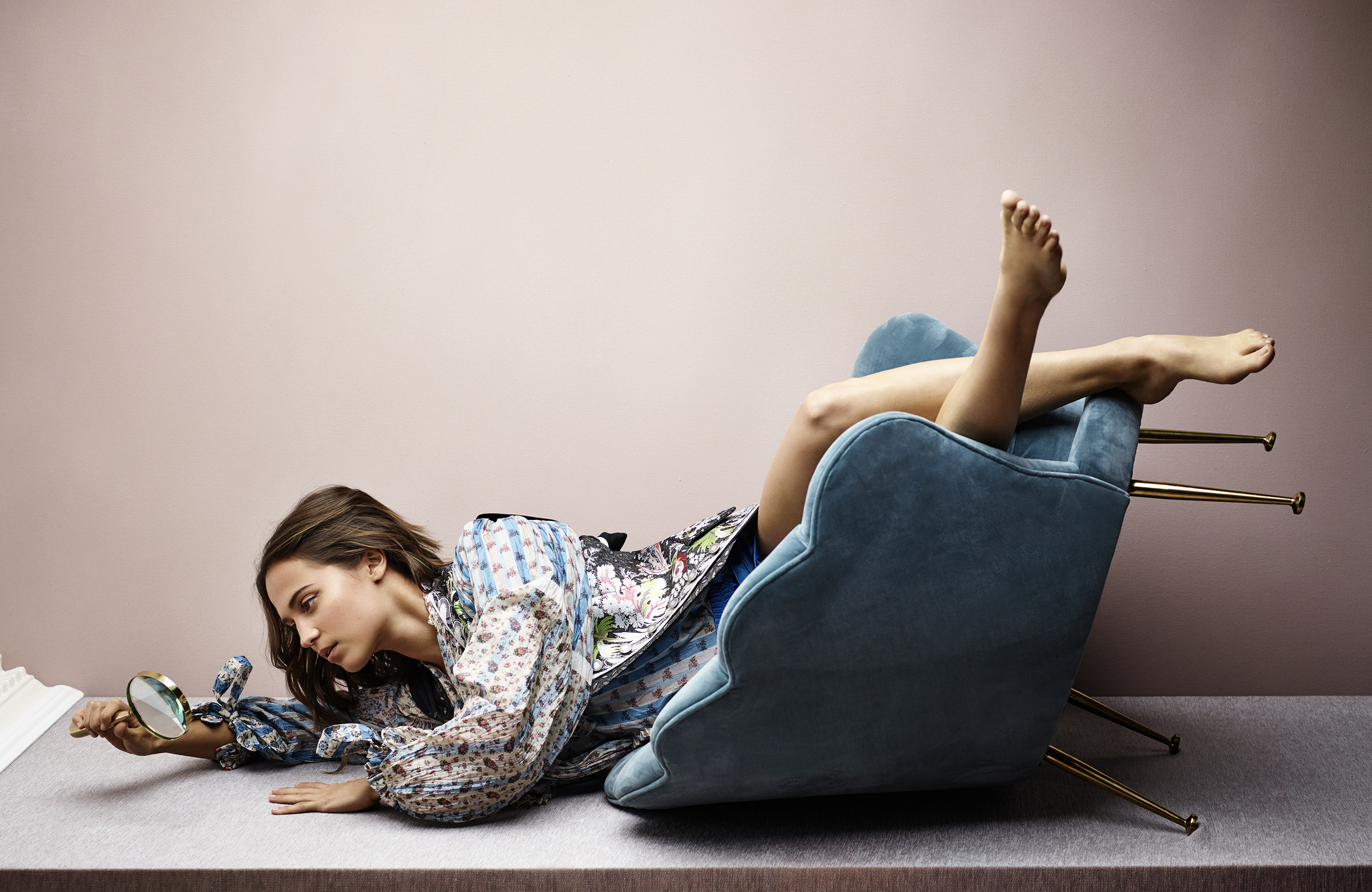 "Extremely important issues are being brought up about equality, safe workplaces and equal pay."

For there is plenty for Alicia to reflect on. Next week, her latest film, Tomb Raider, will be released; she, of course, plays the video game riot grrrl Lara Croft in the new adaptation, directed by Norwegian director Roar Uthaug, and co-starring Dominic West and Kristin Scott Thomas. It is one of the last projects Alicia had committed to before she won an Oscar for Best Supporting Actress in 2016, for her role as Gerda Wegerer in The Danish Girl, which means that she is now, for the first time in two years, picking new projects, working out who she wants to be next. She recently took four months off – the first break in five and a half years when she didn’t have something else in preparation – and travelled to Japan: “Number one on my list until I went – and I want to go back and see more.” She is reading, greedily. “I don’t want to say what,” she says, coy, granting only that she enjoyed Yuval Noah Harari’s Sapiens and Homo Deus. She is tentatively interested in producing. “I love filmmaking, so as an actor it’s been wonderful, but you come in at a later stage in the process. But to be there and develop an idea and move forward – that’s what I put a lot of time into thinking about right now.”

And, crucially, Alicia is re-examining Hollywood itself, which is volatile and pitching wildly. In October 2017, the sexual assault allegations made against producer Harvey Weinstein kickstarted the #MeToo movement that has galloped around the world. Hollywood is in a period of painful self-examination; meanwhile, its women are righteously furious. In January, more than 300 Hollywood actresses, including Natalie Portman, Reese Witherspoon and Shonda Rhimes, launched Time’s Up, an anti-harassment initiative pledging a fund of more than $13 million to help women everywhere take aggressors to court; at the Golden Globes actresses wore black to symbolise the new mission. The BAFTAs prescribed the same dress code, and in February, Uma Thurman spoke, powerfully, about her treatment by Weinstein and his antic auteur Quentin Tarantino. 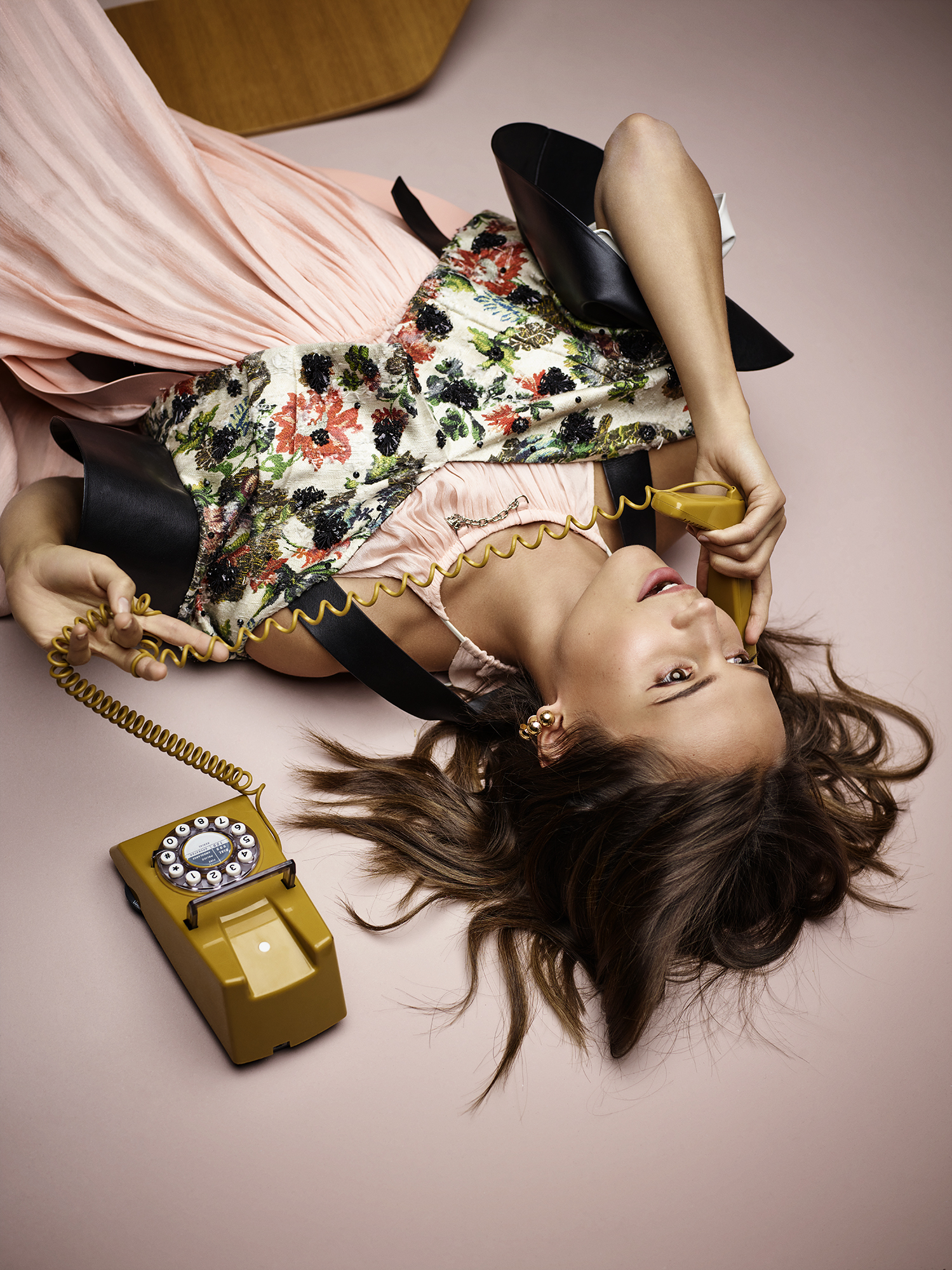 Alicia worked with Weinstein on period drama Tulip Fever: a unilateral disaster that was delayed time and again, and ultimately grossed only $7 million of the $25 million it cost during a limited US release. She wasn’t aware of any accusations levelled at the producer, and says she has never been “put in any situation like that”. “We were just really disgusted and shocked,” she says, quietly. “It felt horrible.”

Alicia talks about the importance of amplifying victims’ stories, and is determined that we must not “put the focus on [perpetrators]”. “It’s been wonderful to see that, more and more over the weeks and months, the focus is on the women and what they’ve gone through, and what the change can be,” she says. She observes that equality in Hollywood, and everywhere, is not just about optics, but also the measurable, visible things like appointing female directors and producers. “Extremely important issues are being brought up about equality, safe workplaces and equal pay. But also, I think, that in any industry, we women have been taught that you have to elbow your way in, because there are no spots for us, so in a big group, it’s only going to be one woman who gets a shot. That’s imprinted. And suddenly, I’ve never felt such support from women. It’s wonderful.”

Notably, she was also part of a group of 900 actresses in Sweden who pulled together a live staging of anonymous stories of sexual harassment and assault – three weeks after the Weinstein news broke – which was attended by politicians and was broadcast live on Swedish television. “It was incredible,” she says. She has been fortunate to work with female directors, such as Swedish filmmaker Lisa Langseth, with whom Alicia has collaborated on three films; Alicia hopes that one day she can be a mentor to a younger actress in the way that Langseth has been to her. 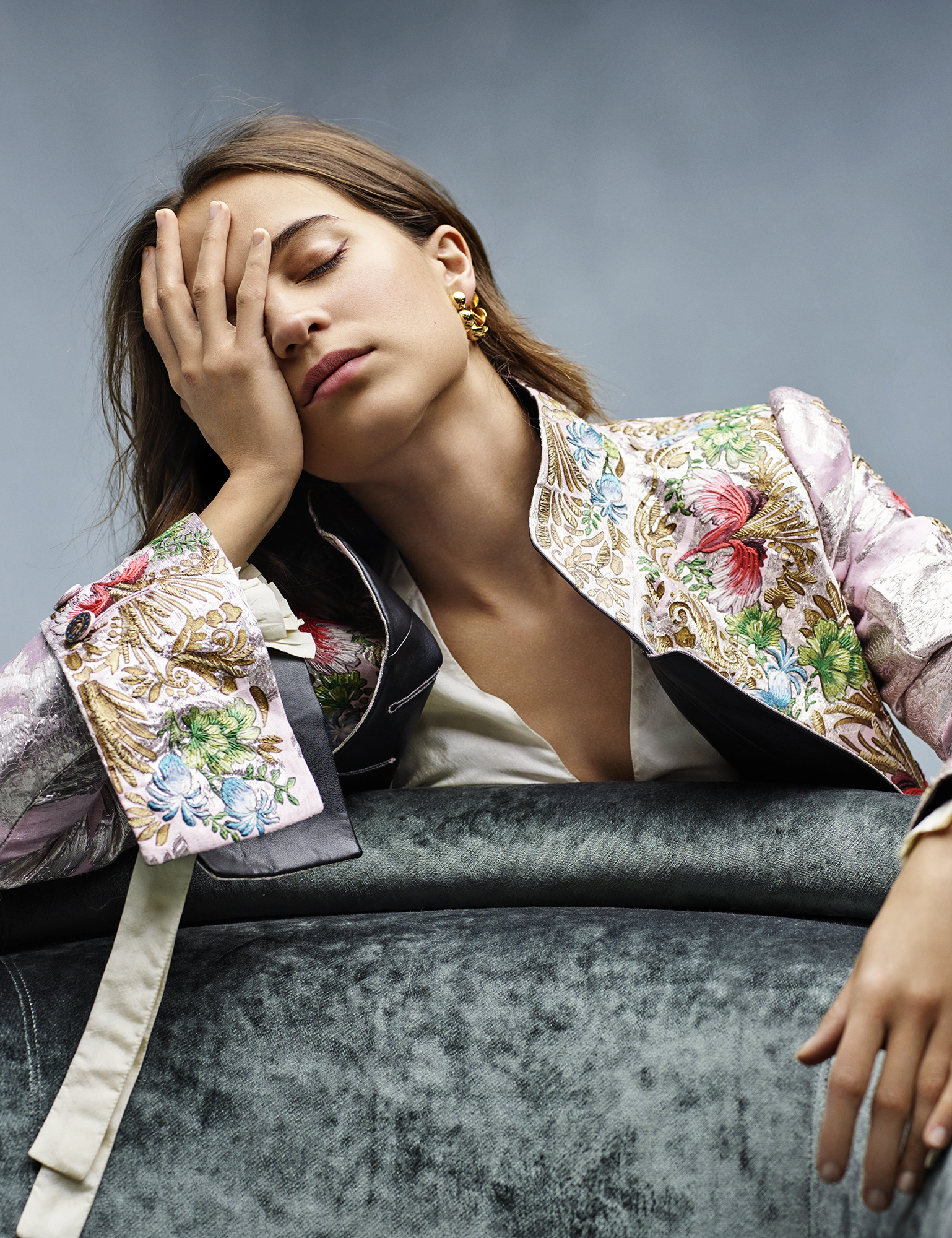 "Change is about initiatives like Time’s Up and 50/50 by 2020, it’s about making sure you include women in all departments, about really making an effort to not only have women in front of the camera, but also behind.”

“I’ve been really lucky; my first three films were all directed by a female director. I’ve had some really cool women to look up to. I think the sisterhood really creates a mentoring environment. Change is about initiatives like Time’s Up and 50/50 by 2020, it’s about making sure you include women in all departments, about really making an effort to not only have women in front of the camera, but also behind.”

Alicia grew up in Gothenberg, the only daughter of actress Maria Fahl Vikander, and Svante Vikander, a psychiatrist, who separated when she was two months old. She lived between their two homes and says she is very close to both parents, though undeniably it was her mother who shaped her identity. “My mum brought me to the theatre – it’s hard to say what’s nature or nurture. It’s a wonderful thing to grow up and see your parent doing something that they love, and that’s just been so clear as long as I’ve been alive.” She saw her mother perform this summer, when she was back in Sweden for a fleeting visit. “I saw my mum’s play. It was awesome. I sat there and was so proud. She’s fucking good.”

As a child, Alicia acted in small theatre productions and attended the Royal Swedish Ballet School, before an injury forced her to give up dancing. She auditioned for drama school twice, but failed to get in; she started appearing in short films and TV dramas in Sweden, winning a rising star award at the Stockholm Film Festival in 2010, for her feature film debut in Pure, directed by Langseth. Her first mainstream Hollywood role was as Princess Ekaterina in Joe Wright’s Anna Karenina, alongside Keira Knightley, Jude Law and Aaron Taylor-Johnson, after which came a roll call of modern classics including Ex Machina, The Man from U.N.C.L.E., The Danish Girl, and The Light Between Oceans, where she met her husband, the actor Michael Fassbender. The two married in Ibiza last autumn. 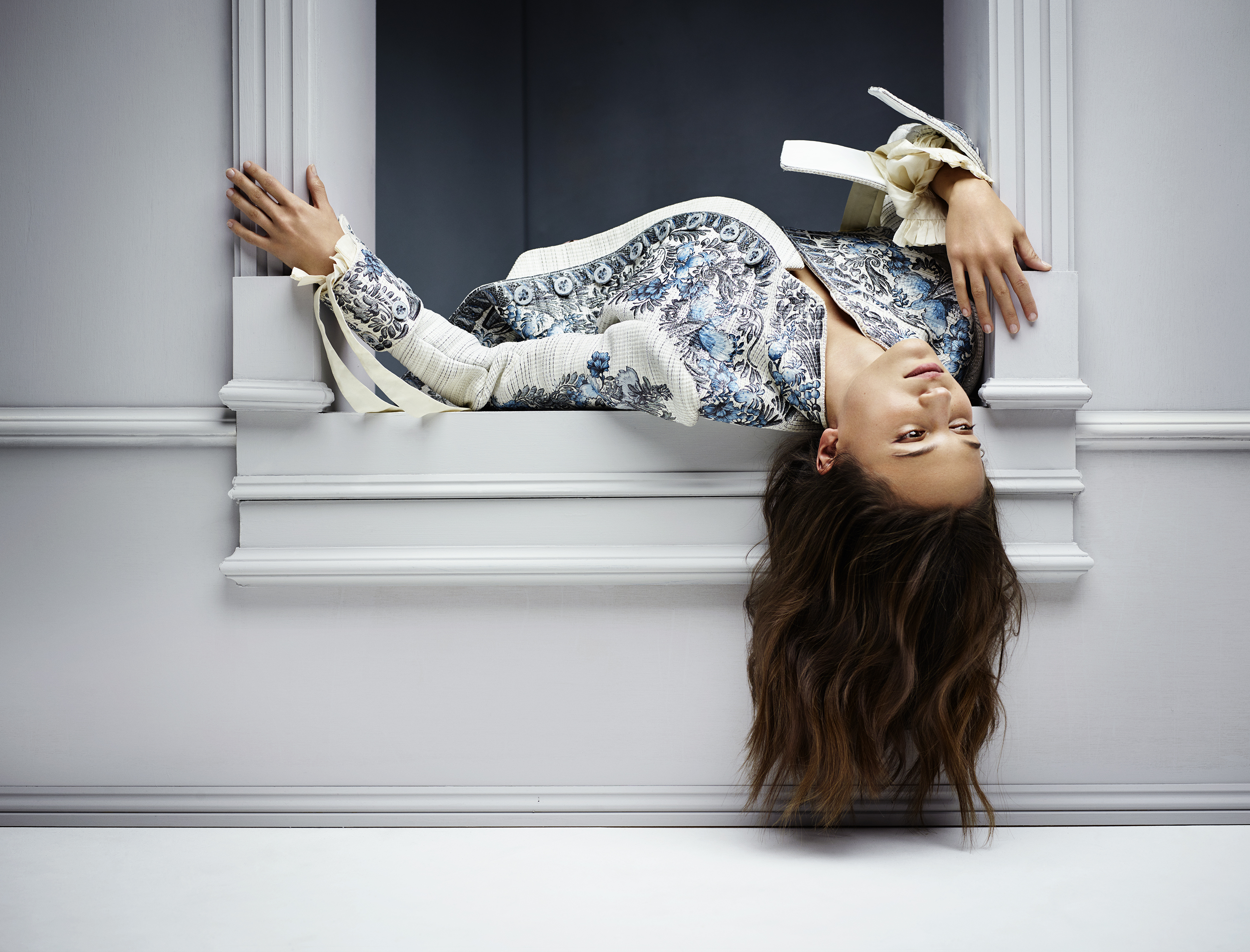 “Due to all the action scenes that [the character] had to be put through, I wanted it to be plausible that a young girl could fight a man who’s obviously both stronger and bigger.”

At 29, she seems an old soul, though a mischievous spirit whirrs beneath the surface. She grins when she talks about shooting Tomb Raider, calling co-star West “a hoot”. “There was never a quiet moment on set.” Playing an action heroine was like professional playtime, and she gained five or six kilograms of muscle to play the role: “Due to all the action scenes that [the character] had to be put through, I wanted it to be plausible that a young girl could fight a man who’s obviously both stronger and bigger.” Learning to do a pull-up was exhilarating. “To feel like you have that strength is pretty cool.” Though she didn’t keep up the superhuman regime. “I realised it takes about four months to gain anything, and only three weeks to [lose] it all!” she exclaims with frustration.

Alicia trained with a mountain of a man called Magnus, a “cool guy”, who’d tease her. “I love to drink wine and eat food, and Magnus would sit next to me with his glass of wine and his dessert.” She gave up drinking for seven months, and ate and ate: “Three eggs at 7am, and two fillets of fish, a bowl of rice and veggies at 10am, at 1pm, at 4pm, and at 7pm. I ate more than I’ve ever done in my entire life.” She scorns people who ask her if she gave up carbs. “There was no getting rid of carbs. It was about eating good, and clean.” The physicality reminded her of ballet school. “When I danced, I liked that side of it.”

But she did miss menus, and wine. Cooking equals relaxation, having time to “choose ingredients for two hours and read up on some different recipes and make your own mix and then have friends come over, make sure they drink lots of wine, listen to music, and be in the kitchen for four hours. It’s my dream day.” Her knockout recipe is a bouillabaisse, homemade bread and homemade aioli; she also makes a mean pie. “My own dough – savoury pies and sweet pies.” When she’s on the junket carousel, turning up and finding she has a kitchen changes her mood. “It suddenly makes me feel like I have time off.” She’s delighted with her suite at the Ham Yard Hotel in Piccadilly, which is where we’ve met: she points to a small kitchen off the living room, smiling.

The character of Lara Croft was meaningful to her. “I was a kid who liked playing video games. But when I was growing up, no girls did, and I always hid it. I didn’t have a Playstation, but I went to friends’ houses. I remember that I’d never seen a female protagonist in a video game ever. I tried to play it, and was a bit too scared. I mainly spent time practising in the manor [in the game], running around. But then I did go back and play it in my late teens.

“And as a child I loved to go to the cinema, watch the big movies, the adventures – that genre specifically. I loved Indiana Jones, I grew up with the Mummy films, I loved those films. To be able to be a part of Tomb Raider was like a childhood dream.”

To read the full interview pick up issue 14 of Hunger, Power Play, out now. Buy your copy here.