[L]ess than 7% of all UK films are shot by a woman. Why? Film directing, cinematography and DOP (director of photography) roles are hardly famed for their inclusivity. A humble google of “film directors” reveals a uniformly white banner of middle-aged men, all of whom look like Scorsese, Spielberg, Stanley Kubrick or some bizarre combination-lovechild of all three. Apart from Kathryn Bigelow (The Hurt Locker) and Sofia and Gia Coppola (Lost in Translation, Palo Alto) the general film-going public would arguably struggle to name another female director or film-maker. So here are two you should really know about.

Vanessa Whyte and Catherine Goldschmidt are both working cinematographers, and the co-founding members of the new UK-based collective illuminatrix. illuminatrix is both a public platform setup to promote the work of its members, and a private network for professional female cinematographers based in the UK and working internationally.  Its members include Natasha Braier ADF (The Neon Demon), Suzie Lavelle ISC (Sherlock), and Polly Morgan BSC (The A-Word), among others.

A recent film photographed by Catherine, No Light and No Land Anywhere premiered at LA film festival in June, winning a Special Jury award. Set in Los Angeles, Londoner Lexi (played by Gemma Brockis) is in search of her father who abandoned her when she was three years old. Directed by Amber Sealey and executive produced by Miranda July, the film (which had an almost entirely female crew) has since been doing festival rounds and will be playing again this week at Palm Springs International Film Festival. Check out the trailer below.

Official Trailer - No Light and No Land Anywhere from Part-Participation Films on Vimeo.

Here we chat with Vanessa and Catherine to unpack some of the problems mentioned above and see how illuminatrix is helping to combat them. Before reading, we also recommend checking out Operator, a BAFTA-winning short film about a 999 emergency call shot by Vanessa Whyte, directed by Caroline Bartleet and produced by Rebecca Morgan. For just six minutes it will unravel your entire emotional spectrum, leaving you a bit dazed, totally out of breath but also wondering, why aren’t female DOPs receiving the recognition they deserve?

Operator from Yann Heckmann on Vimeo.

Hey, can you tell me about how illuminatrix started and what its trying to achieve ?

Catherine: illuminatrix came about pretty organically looking back almost a year ago now. Ness had started organizing meet-ups for women who worked behind the camera in general – camera assistants, gaffers, etc., and I’d started a Facebook group so that we could all keep communicating in between meetings.  A few DoPs in that group expressed interest in starting a private group where we could actually discuss crew and other things specific to being a DoP, and out of that sprang the idea that a more formalized collective could have a public profile also, similar let’s say to the Film Fatales group.

Ness: One story that was completely unanimous between all the female DoPs I know is the experience on set of being told, ‘you’re the first female cinematographer I’ve ever met’. Now, that can’t be right! Between us we know a huge wealth of talented women working behind the camera, yet there is always someone on set who’s shocked, surprised or delighted – but the fact is, we are still considered a rare minority. So that’s what illuminatrix is trying to change; by promoting the excellent work of our members and getting them into the public eye, we can show the TV, film and commercial industries how many talented women there are and hopefully this extra exposure will lead to more work and greater opportunities.

Less than seven percent of all UK films are shot by a woman? Why do you think this is ?

Catherine: I’m sure the problem stems very deep, to an educational level.  As in: we likely to need train more women cinematographers to begin with.  However, Ness just told me that this is the first year that the NFTS has accepted an equal number of women as men in their MA Cinematography course – which is great!  Beyond the number of qualified people (which is growing), the chief issues are really visibility and opportunity, which is where illuminatrix comes in!

Ness: It’s a very male-dominated industry and camera and lighting are particularly male-dominated departments within that. I think it’s a combination of lack of role models, less opportunity for those trying to become DoPs, and of course it is not a job that is particular accommodating to having a family; a problem for all parents in the industry but which inevitably hits women disproportionally harder than men. I think there’s a very strong image of ‘The Cinematographer’ that has been handed down through years of men dominating that role, so it can be hard to break that perception that is so ingrained in the minds of producers and directors. It’s a shame but – consciously or subconsciously – women are still considered a ‘risk’.

What are the biggest challenges with introducing more diversity into the uk film-scape ?

Ness: I think the biggest challenge is finding the right people and providing training and opportunities from the bottom up. There’s no point asking the BSC (British Society of Cinematographers) why there aren’t more women in the society [currently there are 4 women out of over 90 members] when women aren’t being given the opportunity to shoot the kinds of projects that make them eligible for consideration. It’s the same when we hire camera crews, it can sometimes be hard to hire a mixture of genders and ethnicities if you’re trying to build a skilled crew. But when we find those skilled people, we need to promote and champion them, and not just give the job to the last guy we hired ‘cos his is the first name on the tip of the tongue. We need to be giving more opportunities for jobs and training from the bottom up, rather than moaning that there’s not more diversity at the top. I think if you actively decide that you care about diversity it’s not hard to find the people; it might take a little more time but it’s definitely worth the effort!

Catherine: How to achieve diversity is really the biggest challenge… We’re not policy makers ourselves, but we know how to be cinematographers and we have an idea of what people are looking for when they go to hire a cinematographer.  We’re trying to make it easier for people who need a professional, experienced DoP for their next project, and who also want to hire diversely. 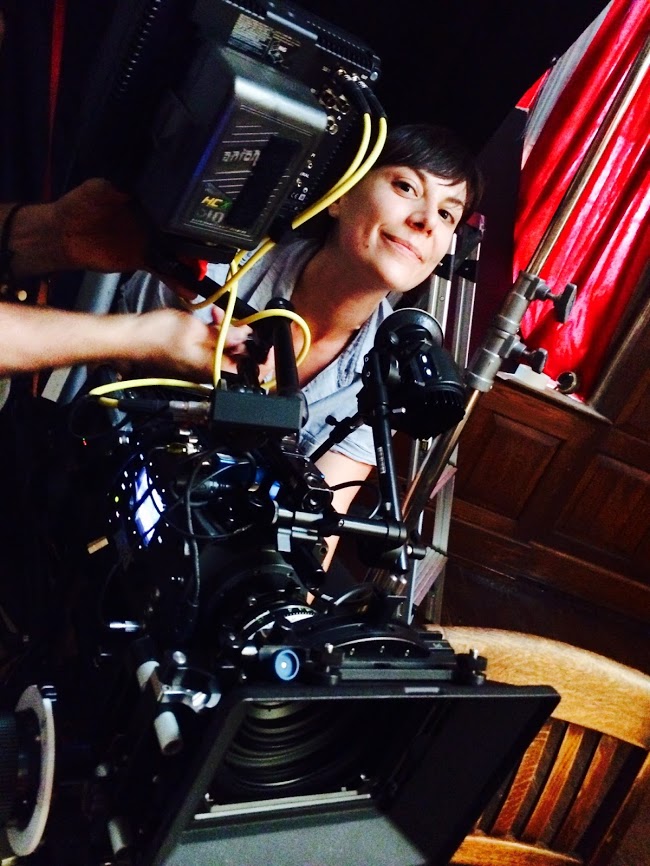 Which cinematographers and film-makers have you found to be inspiring or influential ?

Catherine: We just did two events at the Camerimage Film Festival in Poland with two of the most inspiring, contemporary cinematographers to me personally: Natasha Braier ADF and Bradford Young ASC.  Historically-speaking, my life has been changed by films shot with incredible skill and talent by Jack Cardiff (Black Narcissus, The Red Shoes, The African Queen) and Hal Rosson (Singin’ in the Rain, The Wizard of Oz.)

Ness: I change my mind all the time and go through real phases, but I suppose my classic all time faves would always by Nic Roeg and Stanley Kubrick. Cinematographers… for classic let’s go for Gordon Willis, and my latest craze is Adam Arkapaw. Also totally in awe of Charlotte Bruus Christensen, who shot Far From The Madding Crowd beautifully, and was heavily pregnant when shooting handheld on Thomas Vinterberg’s The Hunt: what a warrior!

Can you give us a short list of must-see films (incl. short films) that we should try and see over the holiday period ?

Catherine: I just saw Arrival and was blown away.  New, wide-releases that are on my personal must-see list include: Paterson, Rogue One, and Moonlight.  I’m also desperate to see a bunch of independent films that made the BIFAs list that I missed this year including: The Levelling and My Feral Heart (both coincidentally shot by illuminatrix members Nanu Segal and Susanne Salavati, respectively!)  My favorite film so far of 2016, if you missed it, was Green Room.

Ness: I saw The Incident at Edinburgh International Film Festival two years ago and for some reason it’s only just come out. You must see this film! Beautifully made and wonderful performances from the cast. One of those films where all the departments are clearly marching to the same beat, I thought it was so well crafted.

What kind of films do you think we need to see more of in 2017 ? What kind of stories still need to be told ?

Ness: I have no idea what NEEDS to be told, but I would love to see films that I haven’t seen already regurgitated in a million ways. I love action films as much as indie dramas, but I do get bored when we see the same type of movie being funded again and again, and interesting directors and writers failing to get their more unique projects off the ground.

Catherine: The more diverse viewpoints are present in film, the more interesting film becomes in general- both in front of and behind the camera.  I think that in 2017- the stories need to get a little more political in light of recent events.  And of course, I’d like to see more underrepresented groups of people shown on screen in new, different ways!