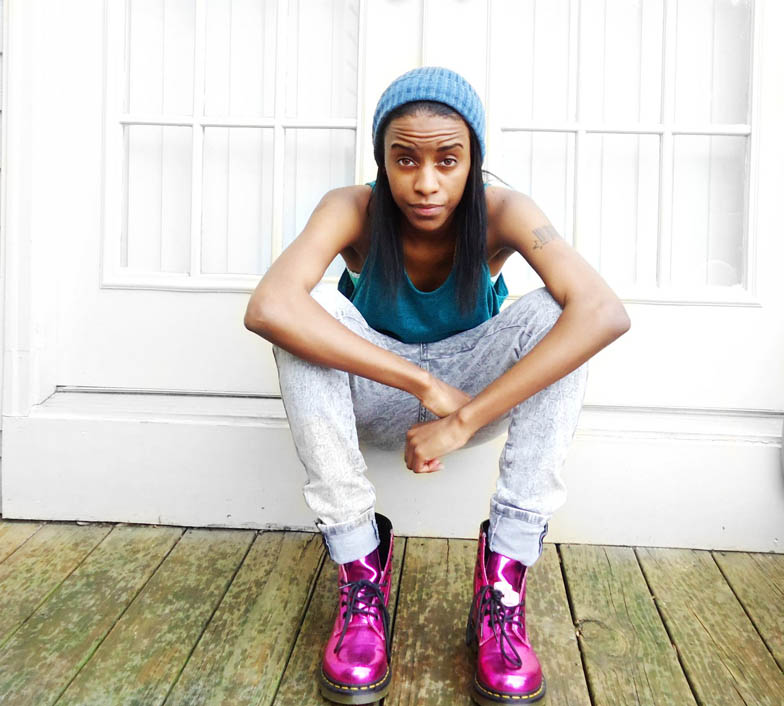 [A]ngel Haze is a powerhouse. The Michigan born rapper has been charging into the Hip hop world with energy filled caustic tracks such as New York and Werkin’ Girls from her debut LP ‘Reservation.’  She has a quiet intelligent energy, that when a mic is put into her hand, combusts, constructing and manipulating words to give an awesome potency to her music. She is unashamedly a paradox- humble and overconfident in the same breath. Whatever she is, the Detroit/New York based artist is coming to get you, that’s for sure. There is nothing stopping her.

You didn’t listen to music until you were 16. How come?

I grew up in a really religious family and secular music was considered the pathway to hell. So after my mother broke free from it when I was 16 she finally allowed us listen to music.

How do you think this has affected your approach to songwriting?

I don’t know, I think that people look too deeply into influence, or having to be influenced. The first person who ever wrote anything was probably just influenced by a thought, so it’s just a thought process.

There is a lot about you being compared with Nicki Minaj Azealia Banks and other female rappers. Where do you think you fit in with the men and hip-hop as a whole?

Who inspires you outside the industry?

Daniel Amen; because he’s rad and he’s the top practicing neurosurgeon in America. I was actually going to school for it, but this what I ended up doing. I want to go back to it, but the school takes too many years, and right now I’m going to give too many years to this. By the time I am ready to be a neurosurgeon I’ll be like 50 something, and that’s not cool. I might have tremors and shakes and stuff.

Maybe, I don’t have a steady hand now, look at this, it is like shaking while I am moving, I’d like stab a person in the brain, paralyze them, who knows.

Words are important to you, being a rapper and a songwriter. You’re good at using them- so explain the choice of the album title ‘Reservation.’

Prior to releasing Reservation I had released several mixtapes, underground circuits and blog sites, so pretty much everyone was aware of me in the industry, but they weren’t sure if I could make actual music that was my own. The mixtape culture is totally different from EP’s and L.P’s, so to me, it was reserving a place in hip hop, because you knew that I was coming, but you didn’t know when I would arrive, and Reservation was the arrival.

You have said you have a ‘knack for vernacular’ what is your favourite word?

Hmm…I want to say narcissism…for some reason or another…

For the meaning or phonetics of it?

The meaning of it. I feel like everyone is a narcissist in their own right-especially me. (Laughs)  I think I am one of the most self-aware people in the world, that way I never psych myself out, never care too much, and never think too deeply, because I know exactly what I am all about.

You are a bit of an oxymoron, humble then confident, shy then outgoing. Are you actually all those things? Do you prefer how you come off in print or in video interviews?

I feel like I am a lot more shy (in videos) but It depends on who I am being in the moment, I’m purposefully contradicting because I like things I say I hate sometimes, it is like bringing out several different sides of me and there are too many people inside of me.

What is your favourite track on Reservation and why?

Supreme. It is symbolic of everything I used to be, wrapped into everything I am now: From the struggle to be confident to the vying for affection, attention and support and all that other stuff, to just being like, fuck it, I am good on my own and then having this almost unmatchable presence in rap right now.  It’s just crazy.

What do like to achieve with your videos? Sometimes they are quite shocking whilst being artistic at the same time.

My goal is always to make it as cinematic as I see it when I am writing creative. I don’t want regular music videos because I feel like they are corny. With New York, my goal was to symbolize the fact that I am here, she (the girl sitting next to me on the sofa, who has been silent for the whole interview) got raped and killed in the video, and the guy got killed, so it is symbolic that I am a threat to both males and females. It comes off a little bit rapey and gory but that is my dark place in my brain and with Werkin’ Girls, I am a huge Halloween fan, I love Freddie Kruger, so it is just a re enactment of every Freddie movement you have ever seen. He starts out with the double dutching girls, and then he just kills them all. I didn’t want it to mean anything.

What is next?  Collaborations, tours more music?

Next year I am touring, but right now I am working on my first album Dirty Gold I did a ton of collaborations, so it is going to be super exciting for me.

Why did you pick Dirty Gold?

Dirty Gold man, it kind of symbolizes me as a person. Because it is just like Reservation- I always want my titles to represent the stage I am in my life, whatever point that I am in. So when I thought of dirty gold- it was kind of like  ‘wow everyone just stumbled upon this diamond in the rough type of ordeal, like mining for gold, you have to dig down into deep dark fucking abyss of hell to find me, and then now I am here!’