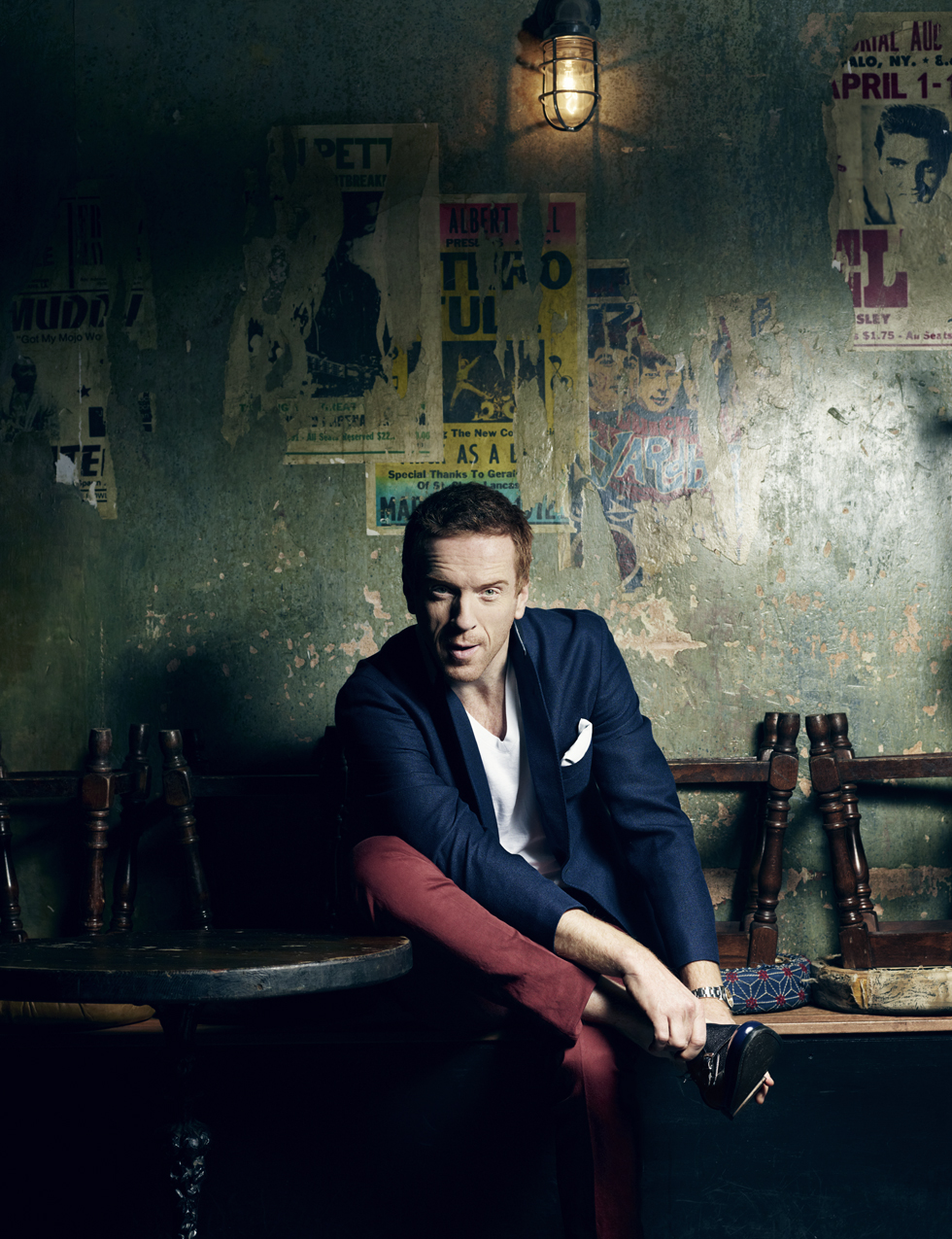 [D]amian Lewis is a confident character, and he has been known to stir up the occasional controversy, be it for his comments at the end of 2013 about his fear of becoming a “slightly over the top, fruity stage actor who eventually lands film work playing wizards”, or for signing a Homeland DVD set to President Obama with the joke, “from one Muslim to another”. There is, however, an obvious humility to the 43-year-old actor, who puts a lot of his fame down to good luck.

Before making it big, Damian began his acting career as a mischievous boy in London’s famous Abbey Road. At the age of 16, he started his own theatre company, and in 1993 he graduated from the Guildhall School of Music & Drama. He took to the stage, working with the Royal Shakespeare Company where he caught the attention of Steven Spielberg, who later cast him in his television miniseries, Band of Brothers. In 2002, he came close to swooping a Golden Globe for his part in Spielberg’s show, but he had to wait until 2013 to put one on his mantelpiece, for his masterly portrayal of Nicholas Brody in Homeland.

With Homeland seemingly wrapped up for Damian, he has left the show at the top (or hanging from a crane, to be precise). This year he returns to the big screen alongside Nicole Kidman, James Franco and Robert Pattinson in Werner Herzog’s latest film, Queen of the Desert. Beyond that the actor continues to keep us guessing. It seems Homeland may have rubbed off on him in more ways than one…

HUNGER: DAMIAN, YOU HAVE SPENT A LOT OF TIME WORKING IN THE US, PLAYING AMERICAN CHARACTERS AND PERFECTING YOUR ACCENT. DO YOU STILL FEEL WHOLLY BRITISH?

Damian Lewis: Yes, I do. I’m glad you ask about Britishness rather than Englishness, as I feel very British. I feel everything that being British has to offer. I think we can take great delight in our Celtic traditions as well as our more Anglican ones. I’ve really enjoyed working in America, but there is a cultural difference. It’s a very conservative place. I feel the grandeur of America.

WHAT HOME COMFORTS DO YOU MAKE SURE YOU ALWAYS HAVE WITH YOU WHEN YOU’RE AWAY?

PG Tips so I can have a good strong cup of tea every morning.

AND WHAT DID YOU MISS THE MOST WHILE FILMING HOMELAND?

When filming Homeland, I spent most of my time in Charlotte, North Carolina. It’s a very large and spread-out place where you rely heavily on cars. I missed the clamour of London; it’s a much more condensed city where you can exercise your senses. I love getting out of cars and getting on the tube. I also missed riding my bicycle, and of course, going to the pub.

WHAT DO YOU THINK OF THE IDEA THAT WE’RE CURRENTLY WITNESSING A BRITISH “TAKEOVER” OF HOLLYWOOD?

You say currently, but I’ve been asked this question solidly for the past ten years, and that’s the truth. I think it feels more pronounced now because the television landscape has changed. It’s become more visually ambitious. The American industry has started to look abroad, filming in places like Britain and using British actors. I consider myself very lucky to have been working during this time of change, where there was a shift in creative appreciation between film and television. This really opened up Hollywood to British actors even more, and that’s why you see a lot of us going across to America to play in these brilliantly written, fantastically conceived long-running television shows, not just films.

HOMELAND TACKLES SOME VERY PLAUSIBLE PLOT LINES. WHAT HAS IT BEEN LIKE TO BE INVOLVED IN A SHOW THAT CAN OFTEN FEEL UNCOMFORTABLY CLOSE TO REALITY?

It has been part of the great success of the show. The writers have brilliantly picked current political stories – the obvious example being terrorism, something that is with us now for the foreseeable future. The idea that an upstanding American hero, who happens to be a marine, might change his ideology was a bold story outline to choose. It challenges Americans with the idea that one of your own might turn against you.

HAS THIS BEEN THE KEY TO ITS SUCCESS?

There’s a well-pronounced sense of fear in America, a fear of the “other”, and Homeland has largely been a success because it feeds into that. It has also challenged the audience to explore the idea that terrorism, or acts of violence, can be orchestrated by governments, and that it’s not as clear-cut anymore. There’s no clear hero in this show. It has refused to make judgments, and I think it has been brilliantly nuanced and ambiguous.

WHAT KIND OF REACTIONS HAVE YOU HAD TO YOUR PORTRAYAL OF A MUSLIM?

I’ve had people come up to me and say it’s one of the most sensitive portrayals that they’ve ever seen. In spite of the fact that Brody was prepared to blow everybody up in a suicide mission, his faith always provided a very personal source of nourishment. We always depicted his faith in an intimate, personal and very sincere way, and a lot of people I’ve spoken to have been thankful for that.

IN THE SHOW YOU HAD TO PRAY IN A FAITH THAT’S NOT YOUR OWN, DEMONSTRATE SYMPTOMS OF PTSD AND RECOVER FROM A SEVERE HEROIN ADDICTION. WHAT KIND OF RESEARCH DID YOU DO?

Well, my research is pretty conventional. I’m not an out-and-out method actor, but I do like to stay in character a lot during filming. I don’t need to go and live in Iraq for three months to embed myself – well I can’t, I’ve got a family! – but I certainly spoke to a lot of Muslims, and here in London I went to the London Central Mosque, and I read the Koran and its teachings. Similarly with PTSD and heroin addiction, I watched a lot of video footage and spoke to addicts and people who work to help those suffering. A lot of my research is based on the anecdotes of real people.

WAS CLAIRE DANES THE BEST CARRIE PRODUCERS COULD HAVE CAST?

Can you imagine if the part had been played by any other Hollywood actress, anyone with an ounce of vanity about them as a performer? Claire has no vanity. She’s committed to making sure she represents the story in the best possible way. Her performance is totally and utterly committed, terrifyingly so at times. I know a hundred other actresses who wouldn’t be prepared to commit to the role in the way she has. I think it has been an amazing thing for her.

WERE YOU READY TO SAY GOODBYE TO THE ROLE?

Yes. I’d known for some time that this would be Brody’s last season, so I was well prepared. Still it was such an enjoyable job that I’ll miss Brody. I have no idea where they’ll take Homeland next, but I bet it will be brilliant. Some people have said that the end of season three felt like a series finale.It brought the first story line to a close, but I think they’ll find many more equally intriguing ones.

WHO IS YOUR TOUGHEST CRITIC?

I am, but if you’re going to do things where you create for other people, you invite other people’s opinions and judgment, so you immediately place yourself in a vulnerable position, and of course you seek approbation. You like people to say, “Oh, darling, it’s wonderful!” but you must know yourself what you have created. I think that’s essential. You must gauge it only using the strictest and the highest bars. You must know yourself, that’s why I don’t read the reviews, particularly during a theatre production. It’s sort of arbitrary.

Read more of our interview with Damian Lewis in issue six of Hunger, out now.