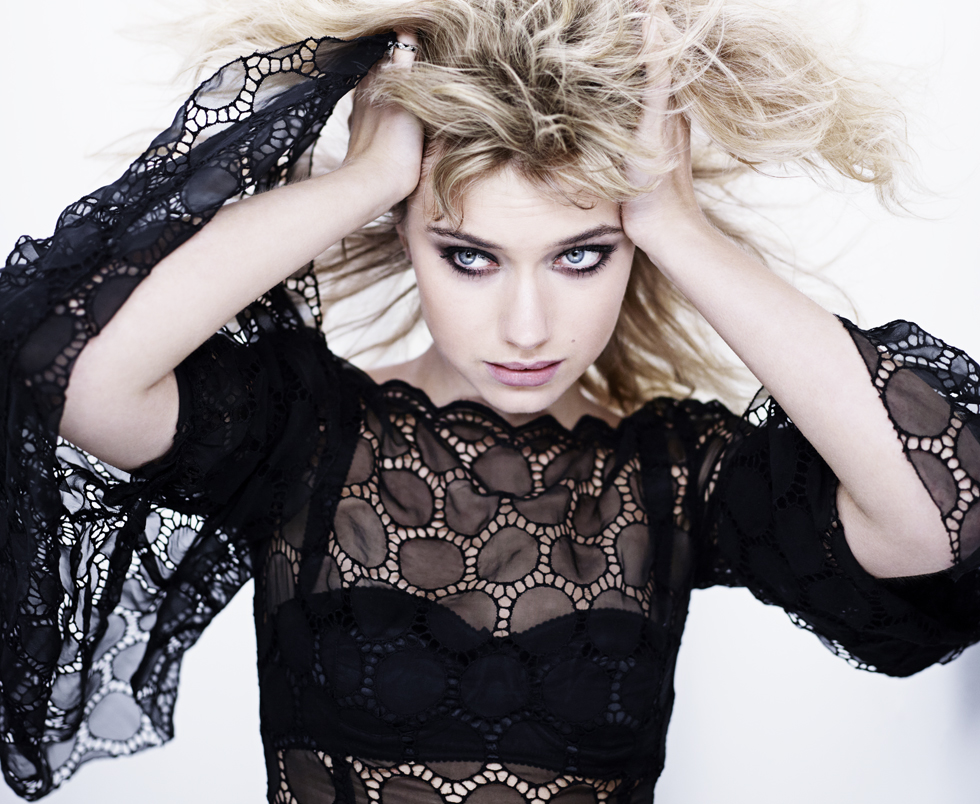 [S]he may profess to have a strange look and live her life in the most complicated way possible, but things haven’t turned out too badly for actress Imogen Poots. Since she caught the attention of the film world in post-apocalyptic 28 Weeks Later, the 24-year-old startlet has built quite the diverse filmography, channelling period romance in Jane Eyre, vampiric horror in Fright Night, and unlawful hedonism in The Look of Love, as well as providing the closest thing to a moral compass in the screen adaptation of Irvine Welsh’s Filth.

And she is not slowing down anytime soon. With five films in the offing this year, including the aptly titled Need for Speed, Imogen is about to make the leap into Hollywood blockbuster territory. Before the whirlwind of red carpet premieres and endless film junkets begins, we catch up with the rising actress in LA to talk femme fatales, shock tactics and hairbrush hatred.

HUNGER: THIS YEAR WE’RE GOING TO SEE YOU IN FIVE FILMS, RANGING FROM COMEDY TO DRAMA TO ROMANCE. WHY DID YOU CHOOSE SUCH A BROAD SPECTRUM OF ROLES?

Imogen Poots: Diversity is always intriguing, and having variety between films is important, but a lot of my choices usually come down to the filmmakers behind each project. If the people handling the material are inspiring, then it’s going to inspire me. A Long Way Down is a Nick Hornby novel, and Pascal Chaumeil, the director, was the perfect artist to tackle that film. There’s a very delicate balance between suicidal despair and dark humour, so a story like that has to be handled by somebody who is really adept at understanding the human psyche, and Pascal knew what he was doing. In Need for Speed I worked with director Scott Waugh, whose background is in stunt work. He’s like an action man to the core, so you want to be in those hands when you’re jumping out of car windows, pretending to know what you’re doing!

YOU’VE GOT SOME SERIOUSLY HEAVYWEIGHT CAST MATES, FROM CHRISTIAN BALE TO OWEN WILSON. HOW MUCH DID YOU LEARN OVER THE LAST YEAR OF FILMING?

Christian Bale is an extraordinary actor and someone I’ve admired for such a long time. Working with him on Knight of Cups was a thrill because we were both in this world that Terrence Malick created. The puzzle that he sets out for you has very much to do with his tone as a filmmaker, and as actors we had to work within his boundaries. Last summer I did a film called Squirrels to the Nuts, which is a Peter Bogdanovich film, and working with actors like Owen Wilson and Kathryn Hahn was eye-opening. It’s a comedy but a very subtle one, and I think the funniest things in life are always bordering on awful.

IF YOU DON’T LAUGH YOU CRY?

Yeah! That’s the story of my life, to be honest.

YOU LIVE IN AMERICA NOW, WHERE THE ATTITUDE IS SUNNIER, SO MAYBE THAT MIGHT RUB OFF?

Maybe. It’s lovely. You just walk around smiling, as long as you’ve got nothing in your teeth. That’s what I tend to do all the time in America, which can feel quite odd sometimes.

YOU’RE CO-STARRING WTH ARRON PAUL IN NEED FOR SPEED AND A LONG WAY DOWN. WERE YOU A FAN OF BREAKING BAD?

I met Aaron before the Breaking Bad hysteria began. I got into it so late. We worked together on A Long Way Down, and I lived every day on that shoot in perpetual panic that he’d turn round and say, “Hey Immy, seen the show? What do you think?” because everyone would run up to him and be like, “Oh, my God, your show’s incredible,” and I’d sweat profusely because I hadn’t seen one episode. But since then I’ve watched it, and it’s amazing, and it shows how special the actors are.

Read the rest of Imogen’s interview in the Mighty Blighty issue of Hunger, out now.