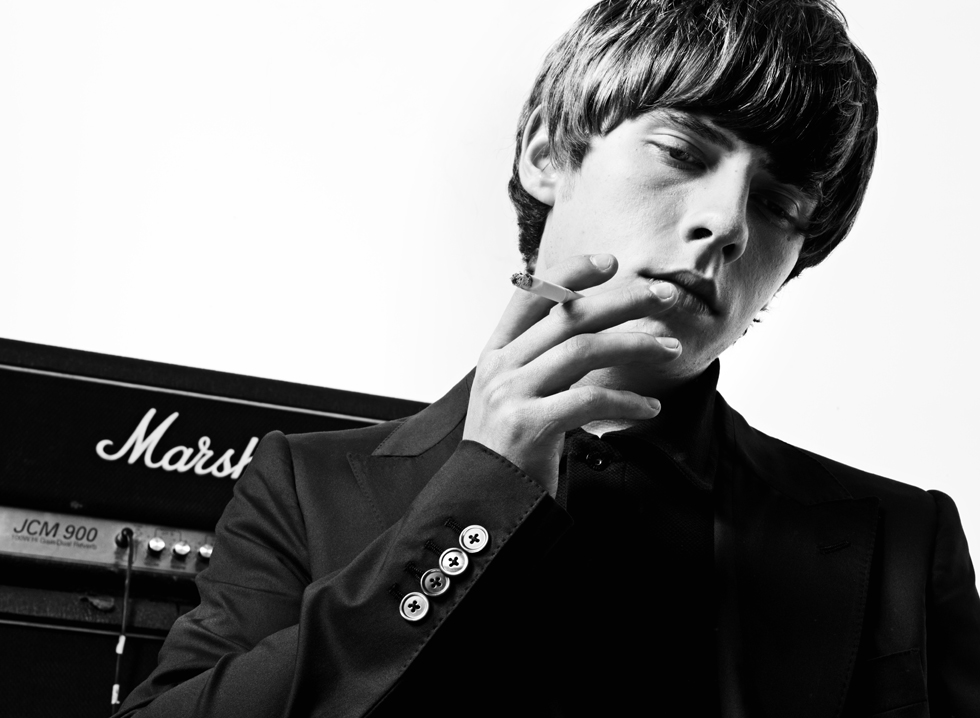 [I]t’s 1pm on a Saturday afternoon, and my phone call has woken up Jake Bugg. “Sorry, I thought it was my alarm,” he murmurs. He’s tired, and maybe just a bit hungover. “I had a day off yesterday for the first time in ages, so I hit it pretty hard last night,” he explains. And why shouldn’t he? Since topping the charts with his debut album in 2012, Jake has lived up to his newfound rock star status with a nearly sold-out US tour and a second album recorded in LA by Rick Rubin. He has even been compared to Bob Dylan, which is quite the feat for the boy whose musical awakening came upon hearing Don McLean’s “Vincent (Starry, Starry Night)” on an episode of The Simpsons.

Jake has been touring solidly since last year and won’t stop until the Australian leg of his world tour wraps at the end of April, but he seems to be taking it all in his stride. “It’s all about the music for me, and touring is a big part of that, even if it’s knackering. Plus I get to see what’s poppin’ in countries I’d never even heard of before I started out.” Lucky that. We’ve got a feeling he’ll be doing it for a long time to come.

HUNGER: JAKE, FOR YOUR HUNGER SHOOT YOU WERE SURROUNDED BY BEAUTIFUL NAKED MODELS. I’M GOING TO GO OUT ON A LIMB AND SAY YOU ENJOYED IT?

Jake Bugg: I think I lived a lot of men’s dream that day to be honest with you.

WAS IT YOUR IDEA?

Yeah, I’ve been listening to quite a bit of Hendrix, and it’s a reference to the Electric Ladyland cover.

CAN YOU REMEMBER THE FIRST SONG YOU EVER WROTE?

I think I was like 14, and it was more of a pop song. It was definitely terrible, but you’ve got to start somewhere! It was called “Tuesday Morning”; very naïve lyrics – I woke up on a Tuesday. It was a nice day… I must have found that inspiring.

WHAY WAS MUSIC SO IMPORTANT TO YOU AS A KID?

I got into it when I started playing the guitar. I was fascinated to make this sound out of something by just moving my fingers slightly. I didn’t understand why it was so appealing to me. It was that initial feeling of excitement every time I discovered a new chord on a guitar, and it became an addiction.

SHANGRI LA WASN’T AS OBSERVATIONAL AS YOUR DEBUT ALBUM. WAS THAT A CONSCIOUS EFFORT TO MOVE AWAY FROM THAT KIND OF STORYTELLING?

I don’t like to be conscious of what I do and what  I write. I just like to see how things unfold. I didn’t want to write about my hometown because I haven’t really been there for a while, and I’m not living that life anymore. When I went back a couple of times it was interesting to see it after everything that’s happened, but that life seems strange to me now. It’s no longer mine. Now I see it from a different perspective. I’m almost an outsider looking in.

HOW DO YOU THINK THIS MIGHT AFFECT YOUR THIRD ALBUM?

It’s hard to tell. This second album came together by accident, but it felt quite natural. It wasn’t something I was conscious of. I only meant to record two songs, ended up recording about 20, which was enough for an album! So that might happen for the third record. You never know. When a new album comes out, it doesn’t feel like it’s mine anymore. I give it away for individual interpretation, so I start from scratch each time.

HOW MUCH DO YOU FEEL YOU GREW UP BETWEEN THE FIRST AND SECOND ALBUM?

I’ve learned a lot. You travel around more. I’ve had experiences and opportunities that I never thought I’d have. People say, “You’ve changed, blah blah blah,” but of course I’ve changed, and that’s normal. People do change as life goes on, as you meet new people. I feel like I’ve become more open-minded. I suppose you need to change and have more experiences to keep making good music, don’t you?

YOUR SONGWRITING HAS BEEN COMPARED TO THE LIKES OF BOB DYLAN AND NOEL GALLAGHER. HOW DID THAT MAKE YOU FEEL?

I don’t really dwell on all that stuff to be honest. I don’t read reviews and interviews. There are much, much worse people to be compared to! But at the same time, I’m never going to aspire to be anyone but myself.

YOU’RE MATES WITH NOEL, HAS HE GIVEN YOU ANY ADVICE?

When I toured with him, my first album had just come out, and as I was already thinking about my second album, I asked him how he did his second one, seeing as it was one of the most famous records of our time. He said that he didn’t really think about it too much, and that it was just a load of songs he’d written. That was a realisation for me, not to stress about it or think about it too much. I don’t think you should be scared about putting music out there because it’s going to be judged all the time anyway. He just said, “Do what you do. Just don’t think about it too much.”

YOU’VE JUST TURNED 20. DOES TEH PRESSURE GET TO YOU?

I kind of do it to myself to be honest. I’ll never let anyone pressure me more than myself because I want to prove to myself that I can continue to make records and play bigger shows. I always feel like I have to step up, and sometimes that can be quite stressful. I get stressed because I want to maintain what I have, and I don’t really know how to do anything else. I sat around for a year writing songs, and then I got signed. I’ve never had a job, so I just hope I can give people something they enjoy listening to.

ARE YOU YOUR OWN WORST ENEMY?

Yeah, I think so. My manager sometimes tries to make me have a day off, but it doesn’t happen because I don’t like to. If I have a day off I don’t know what to do with myself, hence hitting it hard last night!

SO IT’S PROBABLY A GOOD THING THAT YOU DON’T HAVE A DAY OFF UNTIL APRIL. YOU’D GET BORED!

Well, when you think about the Rolling Stones and all those guys – they were doing so much all the time. They never stopped either and look at them now.

ARE YOU GOING TO BE LIKE MICK JAGGER, DANCING AROUND IN LEGGINGS AT 70?

[Laughs] Maybe that’s not quite me…

Read more of Jake’s interview in the Mighty Blighty issue of Hunger, out now