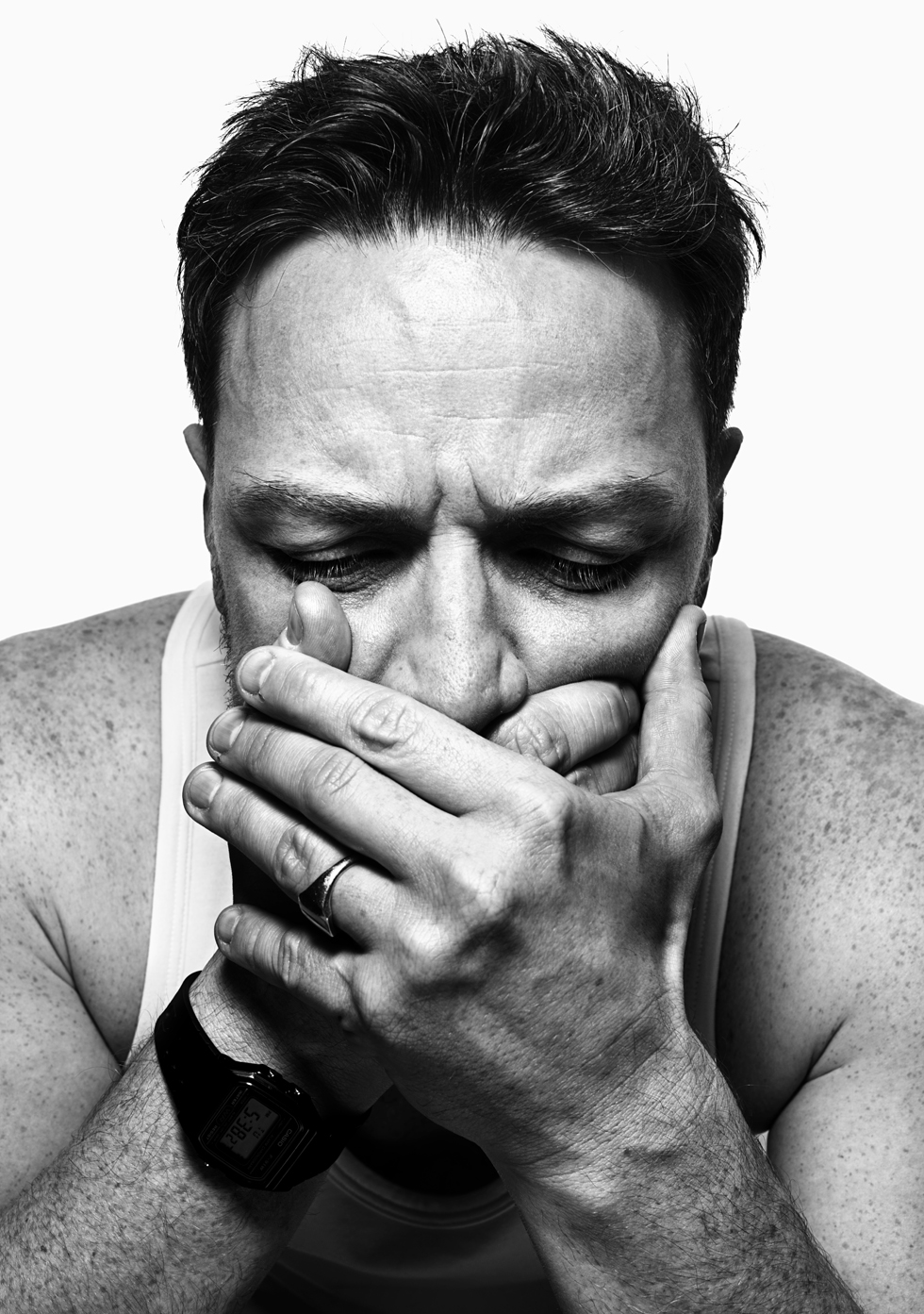 [J]ames McAvoy’s first big screen hit came when he played a noble faun in the film adaptation of C.S. Lewis’s The Lion, the Witch and the Wardrobe – a role rather different from his most recent outing as a morally bereft cop in Irvine Welsh’s Filth. But whether it’s fighting fictional White Witches, being tortured in The Last King of Scotland, or soliciting blow jobs from underage girls in Filth, no one can deny James’s commitment to his craft. So unwavering is his commitment and ability to push himself that Jon S. Baird, Filth’s director, called James’s performance “better than De Niro’s in Taxi Driver”. A bold statement perhaps, but there’s no doubt that James is one of Britain’s finest actors to emerge in the last decade.

Before Filth is unleashed upon an unsuspecting American audience next month, we catch up with James on the set of Frankenstein in New York to find out if there’s anything he won’t do for a role. Hold the peanut butter…

HUNGER: FILTH OPENS IN THE US NEXT MONTH, HOW DO YOU THINK AMERICANS ARE GOING TO REACT TO IT?

James McAvoy: To be honest with you, I had no idea how Britain would respond to it, let alone how the Americans will. We made the film knowing that we wanted people to either love it or loathe it. We thought if we were lucky, we’d have half of the audience love it and half of the audience spit on our names. But it was much more positive: 90 percent liked it and only ten percent hated it. We also thought that we’d only show in 20 cinemas nationwide, but we ended up with a saturation release. And we made a lot of money, which, I can tell you, no one expected. I don’t think it will be quite the same story in America. We’ll be lucky to make it into many cinemas.

DO YOU THINK THEY WILL HAVE TO SUBTITLE IT?

I wouldn’t be surprised if it was subtitled, but there’s not too much Scottish slang in the film. We could have gone much further with the dialect, but we decided not to. We did screenings in New York, and I actually asked the audience if they would like subtitles, but only a handful of them did. That was quite heartening.

BEFORE MAKING FILTH, DID YOU SEE IT AS A RISK? I READ THAT THE BESTIALITY SCENE HAD TO BE CUT?

The scene with the bestiality was taken out because it just didn’t work and slowed down the portion of the film that it was in, not because it was too graphic. In itself it’s excellent and very funny. There was nothing taken out of the film because it went too far – in the first five minutes I blackmail a 15-year-old girl into giving me a blow job, so we’re not scared of the darker side! If it was really bad and I was terrible in it, then it would get a couple of bad reviews, nobody would watch it, and then I’d do X-Men! I really want to be in that place where you risk failure, and you have to go at it a hundred million percent to tell the story, otherwise it won’t work. Every part that I’ve played recently, from Filth to Trance, to Macbeth, has been risky and I’ve enjoyed that a lot. I feel that I only ever do what the story demands of me; it was just great to do three stories in which I actually got to play exceptional people.

YOU WEREN’T THE OBVIOUS CHOICE FOR BRUCE IN FILTH. DID THAT MAKE YOU WANT IT MORE?

No, not really. The characters who have come most easily to me in my career have been Mr. Tumnus in Narnia, Robbie in Atonement and Bruce in Filth, and they’re the ones who are the least like me. I’m nothing like Mr. Tumnus for obvious reasons, but also, I wouldn’t have thought of him as a young person. I’ve always thought of him as more of a middle-aged, roly-poly man, but I think when they put that into action, they found it a little creepy that a roly-poly, middle-aged man was kidnapping an eight-year-old girl! The reason I really wanted to play Bruce is that I think the film deals with mental illness in a really interesting and artistic way – an entertaining and vibrant way that I haven’t seen before. I think the film isn’t just gritty British realism; it has added surrealism. I love gritty British movies, but sometimes a low-budget makes you think you can’t take too many leaps; it’s all shaky hand-held cameras because that’s all we can afford. We still managed to make artistic leaps with Filth even though we had about £2.50 to make it!

WHAT DO YOU THINK BRUCE’S EFFECT ON VIEWERS SAYS ABOUT THEM? A LOT OF PEOPLE EMPATHISED WITH HIM.

In the run-up to the release we thought that the people who would really get it would be students and people in their early twenties. And they have liked it, but the people who have really got it are women. I think to really appreciate this film you need to have a bit of life experience, and enough empathy, not to forgive Bruce, but to understand him. If you don’t have any empathy for him, then all the movie is to you is a really politically incorrect pantomime. If you have any empathy, you have a much more dynamic and profound experience watching it because it hits you on an emotional and psychological level, and you understand that the man is sick. We’re not asking the audience to forgive him, but we’re definitely asking the audience to feel for him.

WHAT DID YOU LEARN ABOUT YOURSELF DURING THE MAKING OF FILTH?

I’ve always had quite a dirty sense of humour, but it really got dirtier. It got quite hefty at times. My wife, who is often open-mouthed at my sense of humour anyway, started to get a little bit freaked out.

IN A RECENT INTERVIEW IRVINE WELSH SAID THAT HE WAS GLAD FILTH WAS MADE IN AN ERA WHEN GLOBALISATION HAD ‘BLANDED OUT’ THE CULTURE. DO YOU AGREE?

Yeah, I do. I think “the artistic business of making films” is a paradox in itself, but I’m not critical of that. It’s a great thing because it means we can do lots of this artistic business. We’ve got a system, an industry and a structure. But then these operate based on equations, and art doesn’t work like that. So sometimes I do think that in the grand conglomerate hegemony of it all, we’re getting more similar the world over. We’re losing some of the individuality. Some of that is great, though. Hopefully one day we’ll be so similar that we’ll realise that we can’t actually have a fight with anybody! But on the other hand, you lose the idiosyncrasies, the small and beautiful differences that make us special.