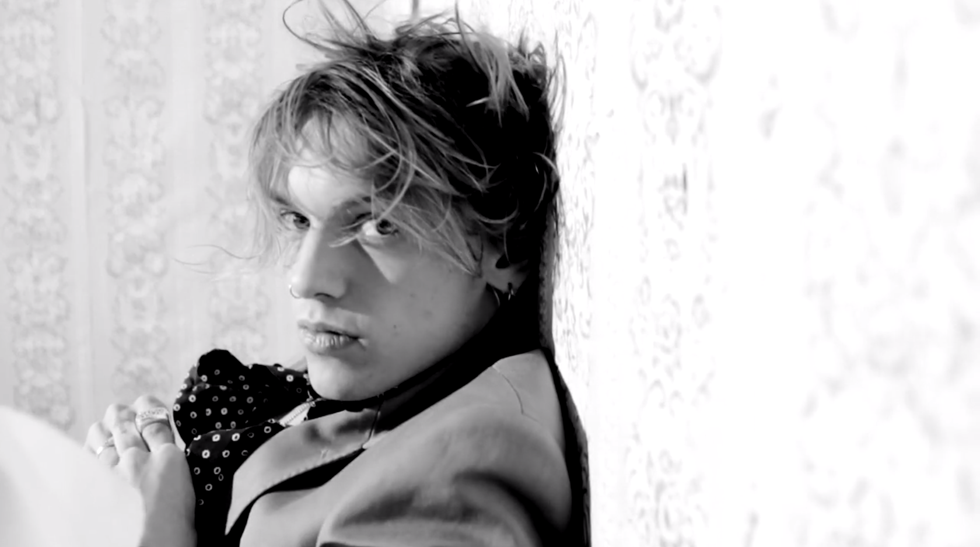 [J]amie Campbell Bower is an enigma. In an industry rife with media darlings he doesn’t suffer fools gladly, and is alarmingly honest, by his own admission sometimes to a fault. But it’s exactly this honesty that makes Jamie one of the most refreshing young actors to emerge in recent years.

Since his big screen debut in Tim Burton’s Sweeney Todd, Jamie went on to star in three major Hollywood franchises, Harry Potter, Twilight and, most recently, The Mortal Instruments, piquing the interest of both the film and fashion worlds, so much so that last December he was announced as the new face of Burberry’s SS14 campaign. But he’s not just a pretty face; an all-round artist, Jamie is on the verge of a burgeoning music career as the lead singer in The Darling Buds, and he plans to release an album later this year. We catch up with the young artist and talk film, home truths and dirty jokes.

IN YOUR PREVIOUS SHOOT WITH US YOU SHOWED YOUR BUM AND SENT OUR TWITTER FEED INTO MELTDOWN. DID YOU KEEP YOUR CLOTHES ON THIS TIME?

I did keep my clothes on in this shoot, yes, regrettably.

YOU ALSO SHOWED US A NEW TATTOO LAST TIME. HAVE YOU HAD ANY MORE DONE SINCE THEN?

YOU HAVE A LOT OF DEDICATED FANS AND A RIDICULOUS AMOUNT OF FAN SITES. DO YOU ENJOY BEING A TEEN HEARTTHROB?

Well, I’d never describe myself as a teen heartthrob, and I’ve always been very careful not to describe myself as a role model because, like anyone in the world, I am human, and I fuck up and I make mistakes. I’d never want anyone to make the same mistakes that I’ve made. I’d never sit here and pretend to be a figure of morality because I’m absolutely not. What I do see myself as is a mascot for kids who feel weird or out of place. When I was growing up I never really had someone I could look up to who spoke honestly. There’s so much fucking bullshit in the world. People are trying to project this wholesome and squeaky-clean image, and it’s fucking nonsense. I’d rather be honest. Maybe I’m not going to get any Disney movies, but I’d rather be that way.

HONESTY IS RARE THESE DAYS.

It’s mostly bollocks, but I do feel incredibly blessed and honoured. I’m in an amazing position at 25 years old. I didn’t go to university; I came out of school when I’d just turned 18, and the industry is notoriously difficult and full of arseholes, but I’m doing what I love. I find it kind of ridiculous that someone wants to pay me to dress up and act because I’d do that for no money.

Like what you hear? The track we used in the video is by Jamie’s band, The Darling Buds. Hear more from them on their YouTube channel.