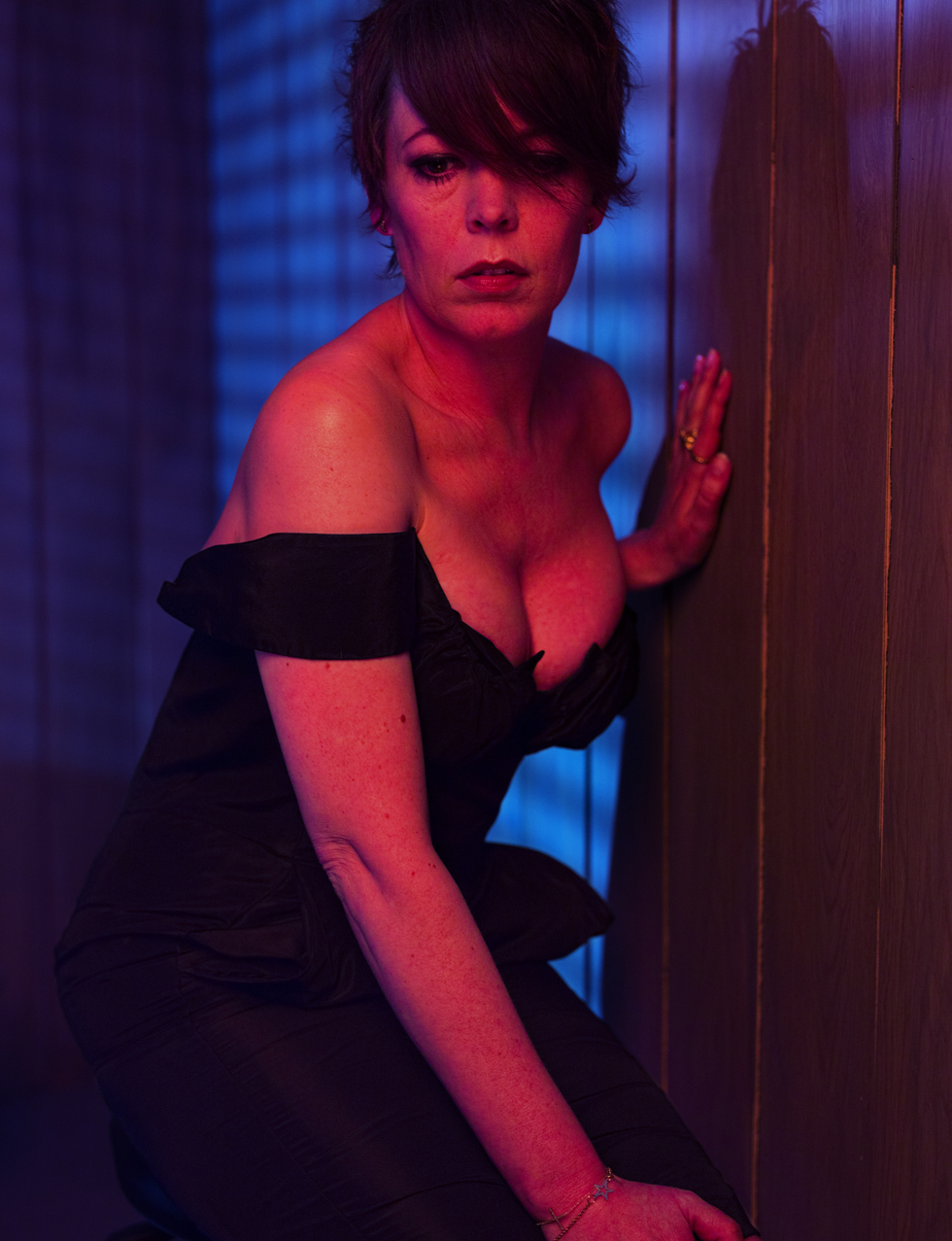 [I]f you haven’t noticed Olivia Colman by now, then you probably don’t own a television. In the last couple of years her hyperreal portrayals of women in emotionally-charged situations have had everyone talking. This year she has bagged two BAFTAs – one for comedy and one for drama – and has had a consistently primetime TV presence, with shows such as Broadchurch, The Suspicions of Mr Whicher and Rev. She also gave brilliant performances as Carol Thatcher, alongside Meryl Streep, in The Iron Lady, as Elizabeth in Hyde Park on Hudson, and as Hannah, the abused wife of Eddie Marsan’s character James, in Paddy Considine’s Tyrannosaur. We catch up with Olivia Colman – Colly to her friends – ahead of her shoot with Rankin.

Hunger: What will we be seeing you in next?

Olivia Colman: The 7.39. It’s a bit like Brief Encounter.
This couple fall in love on the train [David Morrissey and Sheridan Smith], and I’m the wronged wife. The other one is The Thirteenth Tale with Vanessa Redgrave, which is based on a novel [by Diane Setterfield], a ghost story. My character, Margaret, is a biographer and she’s going to speak to Vida Winter, this famous author. Vida has written a book called “The Thirteenth Tale”, but it’s only got twelve tales in it. Margaret finally gets to find out the secret [about] the spooky last one.

What do you think interests casting directors when they consider you for a part?

Currently it might be that there’s a crying scene. A few years ago it was because I did a lot of comedy. I suppose it goes in waves. I feel lucky that they see me [in] both.

Let’s talk about crying. You’re very good at it.

What do you look for in a script?

A good part with good scenes and good dialogue – if it becomes the character’s voice, rather than the author’s. I think it’s just by chance that recently there have been a lot of characters who have gone through quite a lot of emotional turmoil. They’re just the scripts I’ve been interested in. I might go for a load of red nose wearing clown stuff from
now on.

You won two BAFTAs for Twenty Twelve and Accused. Do such awards mean that you’re sent more scripts? Do you get more offers?

You can’t help but wonder what it would be like if you won a BAFTA. And then you tell yourself not to be so ridiculous. I don’t know if it’s made much difference. Maybe people think, “I won’t send a script to her, because she’ll be busy.” I’ve been very lucky, and I’ve always worked quite a lot. [It’s] so weird to do stuff that a lot of people watch; I’ve always done a lot of stuff that not that many people have seen. So I’m working about the same amount. So far it hasn’t made much difference, which is perfect for me. The only thing is more people know your face, which is weird. It takes a while to get used to. I’m not sure if you do get used to it.

What is it like being recognised in the street?

If it happens near home, I might say, “What school do your kids go to, it might be that you’ve seen me there?” Once I got into a cab and the driver said he thought he recognised me. I said, “I’m an actress, you might have seen me on the telly.” And he replied, “Oh, I know. Our kids go to the same school.” I felt like such a cunt.

You go by Colly, is that right?

That’s what my friends call me, always have. It’s a childhood nickname. They just decided one day that we were all going to have nicknames, and they decided mine would be Colly.

There was a time when you weren’t getting as much work. Have you ever thought you might have to give up acting and do something else?

I don’t think the fear of “That’s it. I’m never going to work again” ever goes. But I think it’s probably quite healthy to be kept on your toes, and to not take it for granted. I’ll never forget the years I didn’t work. They were really difficult and not that much fun. I can’t do anything else. I’m shit at everything. I did consider training as a midwife when I had my children. Healthy births would be amazing to be a part of, but then again if something went wrong, I’m not sure I’d be strong enough to get over it. I’ll just have to hope I keep acting.

What about your children, do they ever get to see you in anything?

I thought they might be able to watch Doctor Who. But when the teeth appeared [her character ends up with a mouth full of snake-like fangs] I was desperately grabbing at the remote to switch it off.

What impresses you about other actors’ performances?

The ones where I get completely lost in the story, same as everybody else; when you completely forget they’re saying [somebody else’s] words, and that there’s a camera team. The male lead in Rust and Bone [Matthias Schoenaerts]: I forgot it was a performance; I was watching something real and heartbreaking, and that never fails to mesmerise me. I’ve talked about him [Schoenaerts] incessantly and want to know why he wasn’t [nominated] for every award going.

Your portrayal of Hannah in Tyrannosaur was difficult to watch, equally real and heartbreaking. How did that part come about?

Have there been parts you really wanted but missed out on?

I really wanted to play the character Sarah in South Riding. But when I read for it I just wasn’t very good. I just don’t think I got it [the character]. It wasn’t right for me, so I wasn’t very good. When I saw Anna [Anna Maxwell Martin who got the part] in it, I knew I just couldn’t have played it better than her. She was brilliant.

Finally, if you could go back 20 years, and give your younger self some advice, what would it be?

I think I’d have to go back further. I wasn’t very good at school. I think I’d say not to worry too much about that. Is that bad advice?