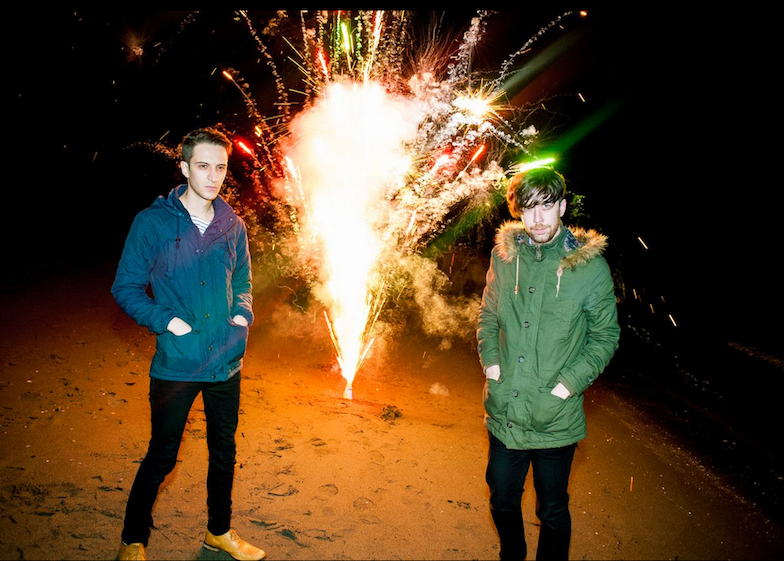 [A]lready big news in their native Canada next year Fine Times unleash their breed of indie synth pop on on the rest of the world. We catch up with the pair to chat about their surreal new video ‘Hey Judas’ and find out why there’s more to Canada than Justin Bieber.

WHAT’S YOUR STORY, HOW DID FINE TIMES COME ABOUT?

JEFF: Matt and I originally crossed paths several years ago while working at the same record store in Vancouver. We’d bonded over shared musical interests and ended up getting together for some writing sessions. It kind of snowballed from there – we recorded a 6-song EP that ended up in the hands of Jonathan Simkin, with whom we ended up signing a management agreement. With youthful stars in our eyes, things kept pace and we entered into a deal with a Canadian major label. We’d assembled a live group and seemingly had the wind at our backs; going out on the road, while also putting the final touches on  a new record. But, it all came to a stop when a major downsizing at the label put a freeze on everything. The momentum had vanished, and with it, the group that we’d had.   Those things sort of put us at a fork in the road. We’d spent a lot of time reflecting on the mistakes we’d made up to then, and we vowed to make good on our decisions going forward. Jonathan was still with us, and at that time, he had just begun laying the groundwork for Light Organ Records. Through it all, he’d been incredibly supportive in allowing us to stick with our vision, and he actively encouraged us to continue on his new label.   At that point, we decided we had to let up on the past and begin recording under a new name, which ended up being “Fine Times”. It might sound small, but I can’t really underscore how liberating the feeling was that came from that change.

EXPLAIN THE BAND NAME TO US.

JEFF: The journey to a band name is one of the more painful endeavors we’ve ever had to repeat. It really tests the limits of your own bad taste to review a list of awful names that you, yourself, have come up with. With that said, Matt, for a time, had wanted to name the band “Times”, which was the closest we’d gotten to a name for months. I still wasn’t too thrilled with it, so I kept him at bay on the idea while I continued to scour books and films. Eventually, I came across Woody Allen’s “Without Feathers”. In it was a short fictional piece called “Fine Times: An Oral Memoir”. It just sort of hit me like a slap in the face. Matt and I went out that night, and settled on it over a fistful of jäger.

WHAT IS BOTH OF YOUR EARLIEST MUSICAL MEMORY?

MATT: The earliest one I can still remember involves Michael Jackson. I was probably four or five years old, and I’d become completely obsessed with him. I had ‘Moonwalker’ on VHS, and I used to watch that on repeat. That and the ‘Bad’ album. I even had a life-size poster in my room. I tried to do all the dance moves- but I was both four and Jewish, so I was inherently a terrible dancer.

JEFF: When I was very young, I’d recorded myself on a relative’s camcorder, lip-syncing to “Beat It”. I still remember the infectious feeling I got from the laughter of my family as they watched my silly video. Looking back on it now, I suppose my desire to entertain has always been innate. Ironically, the practice was all for naught; my role in our videos has been relinquished to simply standing and vaguely pouting.

EXPLAIN THE CONCEPT BEHIND YOUR VIDEO FOR ‘HEY JUDAS’ – HOW DID YOU COME UP WITH IT?

MATT: It really started with a strong aesthetic. I had been listening to these old 1930s Arch Oboler radio dramas- and there was one called “The Ball.” These two college kids in Paris end up at some weird party and everyone is wearing masks except them. The story is a little kitschy, but it’s fun- and I really liked the visual it drummed up. It made me think of Eyes Wide Shut.   The theme of the video is about the conflict between the primal and the intellectual side of human beings. It’s meant to be secular. I wanted to use the aesthetic to relay that idea as much as possible – for example, we played with a lot of chiaroscuro lighting to depict those contrasting aspects of human nature.

WHAT KIND OF REACTION HAVE YOU HAD TO IT?

JEFF: We’ve had the reaction that we expected – both the love and the hate. There were deliberate things that went into the treatment of the video to keep interest high and other elements that were intentionally made to provoke. Good or bad, I haven’t yet sat in a room with someone and been given no reaction. Personally, that’s always been my biggest fear of making something like this. We didn’t just want to make another music video.

WHAT MAKES YOU STAND OUT?

MATT: I’ve always said I just want to write good songs. That’s obviously completely subjective in nature, but it’d be nice if some people remembered these songs years from now.

JEFF: We’re both highly self-critical, so that’s a difficult question to answer. All we can do really, is continue to make music that we think is interesting.

IN YOUR OPINION IS THERE A HUGE DIFFERENCE BETWEEN THE CANADIAN, US AND UK MUSIC SCENE?

MATT: Absolutely. Culturally each country is different. Everyone has different television programs, different politics, different traditions- all those things influence and affect what people are creating musically. I lived and attended school in Liverpool for a year, and my English friends grew up surrounded by completely different influences than I did. Of course, we shared some similar ones, but there‘s a lot that was specific to growing up in the UK. It’s the same anywhere else.

WE BLAME CANADA FOR JUSTIN BIEBER, HOW ARE YOU GOING TO WIN BACK OUR LOVE?

MATT: By reminding you that we still blame the UK for the Spice Girls. I’d say we’re even, but I then I just remembered Spice World was a thing.

JEFF: I can’t really follow Matt on that one. My crush on Geri Halliwell continues to be a thing.

WHAT ARE YOUR THOUGHTS ON CURRENT POPULAR MUSIC?

MATT: I’ll be honest, I don’t really keep track of what’s going on with it. There’s always going to be terrible popular music, but there’s going to be good stuff, too. Some people are always going to look back and think pop music was so much better in [insert decade here], but that’s not exactly correct. There was awful music back then too; it’s just that we only remember the good stuff. I actually just saw a video today for some 2 Chainz song. I don’t know anything about him. It’s got like 25 million views, and all I’m thinking is who is this guy? The song goes “All I want for my birthday is a big booty ho”. It’s so ridiculous; the video is totally outrageous. The song is terrible, but I love it.  In a perfect world, Hall & Oates would still dominate the charts, but I suppose I can settle for 2 Chainz.

WHAT ARE SOME OF THE FINEST TIMES YOU’VE HAD IN THE BAND SO FAR?

MATT: I see what you did there. It’s difficult to say, but making the record and shooting the video for ‘Hey Judas’ are among our biggest highlights. Things are just starting to get rolling, and we’ve got a number of big things planned for 2013. To be honest, we’re both not really wired to focus too much on what we’ve done as much as we are on planning what we’ll do next.

YOU’VE BEEN COMPARED TO MGMT – WHAT DO YOU THINK OF THE COMPARISON AND DID YOU EXPECT IT?

MATT: It’s flattering; they’re a great band. It wasn’t a surprising comparison, ‘Oracular Spectacular’ was very poppy ‘indie rock’ record, and so is ours, but I don’t think we sound alike. The psychedelic video for ‘Hey Judas’ probably helps to draw that comparison- but we’re not a psychedelic band. We just like weird stuff. Plus, we’ll never make a prog rock record.

JEFF: We’ll be hitting the road in March, doing SXSW and Canadian Music Week along the way. And, we’ve begun work on a follow up video, which we’re aiming to shoot before the end of spring. At the same time, we’ve already begun demoing new material; most of the songs off this current record were written two to three years ago, so we’re both anxious to roll out some new songs. I guess it sort of gets back to what Matt was saying; we’re not ones to focus on what we’ve got in the present so much as we’re always looking forward to what we can do next. In that regard, continuing to make new music will always take centre stage.