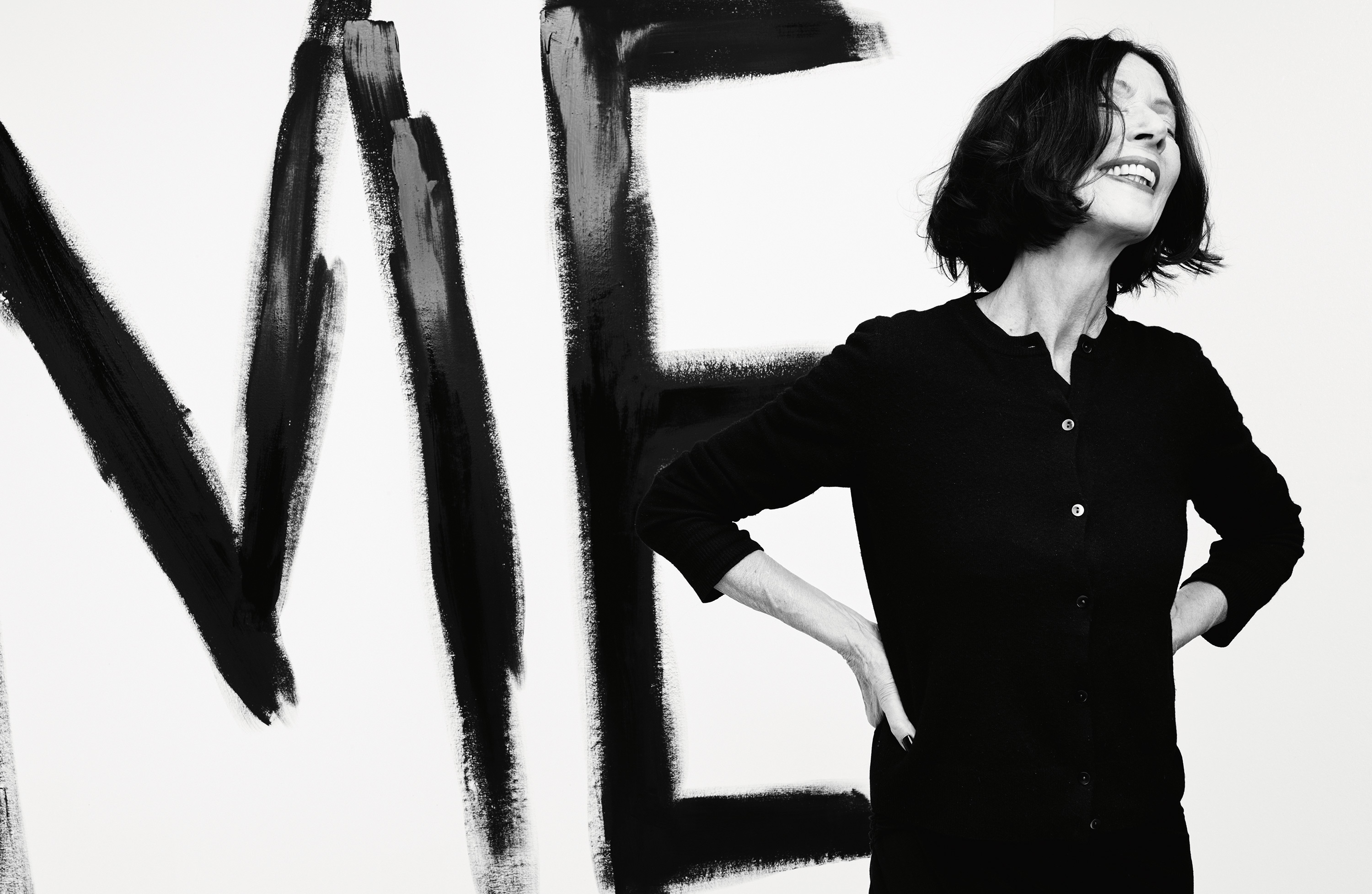 [I]t’s easy, when interviewing someone, to default to too much detail about the setting, what they’re wearing, and all that “filler” stuff. But when it comes to Katharine Hamnett, who cares about all that? It’s simply not necessary: all you should really be interested in is what’s coming out of her mouth.

“If you think, like, a beehive is a product of nature, so is the internet, social media – this is where we’re actually evolving. So it’s like an evolutionary step we’ve made as a species,” she observes insightfully. Later, she apologises for her “rambling” throughout our chat, but this is far from what she’s doing – this is one of those brilliant conversations that cover all of the ground upon which you want to set the world to rights. From fashion education (she thinks “the training is shit” by the way, “the way students are given design projects is bollocks”) to the importance of learning languages (“treat yourself to a Berlitz one-to-one instead of the new YSL bag”) to the very messy state of the world today (more on that shortly), and fashion’s latest phenomenon.

“I think the Vetements story is really interesting: it’s like a Svengali effect on the whole industry. It’s incredible how they’ve managed to hypnotise everyone, getting people to pay £300 or £400 for a DHL t-shirt,” she says. “If people do that, they are sad. I mean, you could just swap a decent jumper with your DHL man when he comes if you really want a DHL t-shirt – this may be the better way to do it. Or maybe just get a job at DHL and get several.” And of fellow fashion phenomenon Gucci, she can’t help but draw comparisons to Desigual: “You can quote me on that,” she cackles.

Of course, there is one big topic on her mind right now: Brexit. When we talk (okay, some scene-setting context for you) in the buzzing and pristine Hunger offices, it’s the day after the London Fashion Week Men’s collections and a good number of designers referenced it (Matthew Miller, Liam Hodges, Christopher Shannon). Before I hit record on the dictaphone, it’s already come up in our conversation. “It’s really hard to think about anything else. We’re just run by nincompoops really, aren’t we? It’s just terrifying,” she reels off, impassioned, pissed off, and rightly so. 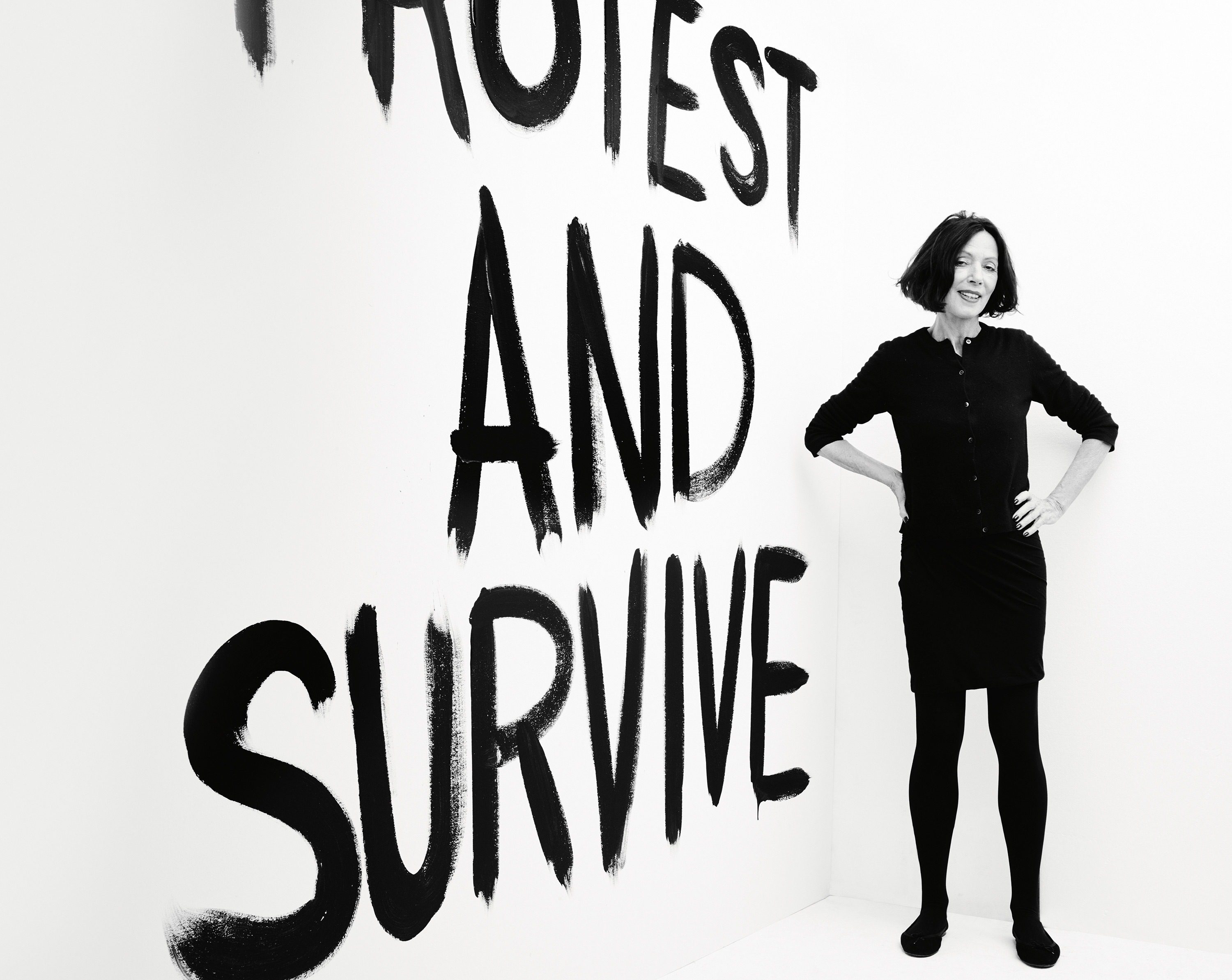 "We have to politically engage, people have to call their elective representatives now, we have to write to them and tell them that unless they represent our views, we won’t vote for them."

“The only thing that has come from it is that we have to politically engage, people have to call their elective representatives now, we have to write to them and tell them that unless they represent our views, we won’t vote for them next time. It’s the only thing that affects politicians’ behaviour – something that threatens their ability to be re-elected.” Instruction to follow indeed. And then there’s Trump. “America, I mean, is there going to be civil war? It’s really frightening. We have to get at it.”

Getting “at it” is exactly what Hamnett, CBE, Designer of the Year at the British Fashion Awards 1984, activist, fashion designer and all-round political-ethical heroine, has made a career from doing. “Abused excess media interest,” as she puts it. “But it would be despicable not to take advantage of the situation, put out some stuff that needed to be said.” She’s talking about her slogan t-shirts, for she was doing them long before Henry Holland started sending fashion rhymes down the catwalk – and her sentiments carried far more clout. “It’s funny, I look at those ones we did at the time and they were regarded as quite contentious: ‘Save the world’, ‘No war’. These were regarded as quite threatening,” she says.

Most famously, the late George Michael wore her “Choose Life” t-shirt for Wham’s “Wake Me Up Before You Go-Go” music video; at the designer’s London Fashion Week show in 2003, Naomi Campbell sported a design that read “Use a condom”; and Hamnett has used the format to promote countless other political protest messages: “Stop War, Blair Out”, “58% Don’t Want Pershing”, “Preserve The Rainforests” are among the causes.

She recalls American Vogue paying her a visit in her office in the 80s. “Because I was flavour of the month, coming up on the inside. And they took one look at the t-shirts, spun on their heels and left without a word. You couldn’t even really talk about condoms then. It’s odd, isn’t it? We take all of these freedoms for granted. Really, we’ve got to use them or we’ll lose them.”

But the state of the world now isn’t too dissimilar to when Hamnett broke into its fashion sphere back in the 80s, launching her own label just before, in 1979. As she remembers: “It was dark times, it was Thatcher’s Britain, we’d had the smashing of the unions, the miners’ strike, we’d had the smashing of education, the invasion of the Falklands.” Just swap and insert a few words and events around in that sentence and welcome to 2017. “But there was a flip moment around Band Aid and Live Aid and we really thought we could change the world – but we were naïve and we failed, really. If we had made changes on all levels, including the environment, we wouldn’t be in such a bad way as we are now.” 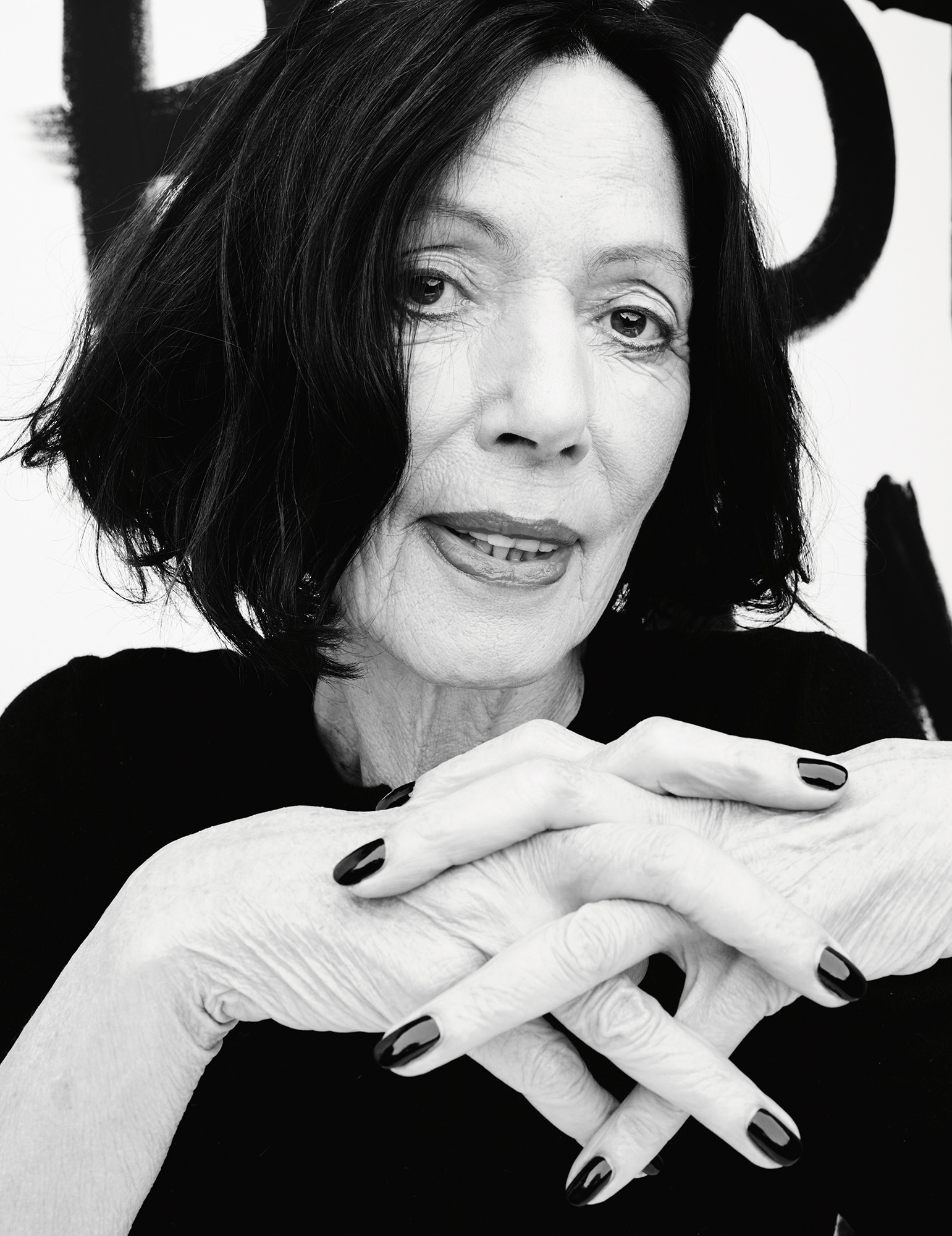 "There was a flip moment around Band Aid and Live Aid and we really thought we could change the world – but we were naïve and we failed."

Aside from being synonymous with putting slogans on t-shirts, a hallmark of Hamnett’s work is promoting sustainability, ethical production and being environmentally sound. “It’s shocking that it’s not a vital part of the [fashion education] syllabus. The actual design and conception of product – it’s the fate of millions of farmers in agriculture!”

A graduate of “golden era” Central Saint Martins – when London was a pre-punk explosion of culture, and when the renowned fashion college was located on Charing Cross Road next to old Soho and was “such an exciting place to be as
a teenager, thrilling and beautiful” – Hamnett never actually intended to be a fashion designer per se, or contribute to and change the world in quite the way she did, even though fashion had always had a presence in some way in her life. “I just wanted to get rich and famous like everyone else, do you know what I mean?” she says, in an honest and human response that makes you like her even more – especially in light of her activist-ethical ways. “I was more keen on money then.”

At school, she didn’t know what she wanted to do career-wise, though later harboured ideas of being an archaeologist or an actress or a film director, but her parents – her father was in the Royal Air Force and her mother a physiotherapist
“but a housewife, really” – pointed out that she needed to be able to afford to make a living and that there were no female film directors. And she didn’t get into RADA. It was when a friend happened to be going to CSM – Hamnett had never heard of it – that she thought, “OK, I’ll come and see how it is.” And of course it was amazing, she remembers, “it was such fun”.

But her fashion training had really begun much earlier – at the age of six. “My mother was very keen on fashion in those days, the 50s, and would make her own clothes: you’d buy the Vogue patterns and go to Liberty to buy the fabrics and Dickins & Jones to get the cotton – that was my job,” recalls Hamnett, whose first foray into garment design came by way of a little apron she made at school in France. “My mother got this organza and I thought that’d make a lovely apron and they were all looking at me like ‘Eh?’ because I was making this French maid’s apron in see-through silk.” Provocative clearly from the outset.

“I’m more European than I am British. I prefer it. I prefer the attitude, the work ethic, the kindness, the absence of a class system,”

Years later, her eponymous line became a huge success. “I know that people think we just did t-shirts, but they were a minor part of it. We sold an enormous amount of clothing,” she points out. “But it got to this point in the late 80s and I had won designer of the year and all that, and it seemed like you just couldn’t do anything wrong. We were very badly behaved. Our skill was staying out of the newspaper, which I would really congratulate myself to my grave that we did. Because we were really naughty and the worse we were, the more they loved us. In the end, I just thought this is too fucking easy, this success is actually boring.”

That’s when she fell down the rabbit hole, deciding to check up on the impact of what she was doing, making sure that it wasn’t doing any harm. “Crssshhhhhhhh,” she bursts into a crescendo-explosion noise. “And that was the big moment when you realised everything you were doing was destroying everything that you love, We’re destroying the planet. I realised that I’d been partying, we’d been surfing this wave of fabulousness and gorgeousness, and yet underneath it was just rotten to the core and needed fixing,” she says of the wake-up call, which changed the way she went about working from then on. “The industry has been so laggard. I find it shocking how huge brands are just about starting to do sustainable now because they’re still scared. Where have they been?”

To that end, Hamnett is tackling these issues head-on once again, her new venture taking her to Italy to set up a production office and put right many fashion wrongs. “We are setting up a vertical operation, 99 percent free and independent of the fashion system, for our new online store,” she explains. Launching in September, it will include producing sustainable materials, paying proper wages, selling direct to consumers and a variety of collaborations. “We are teaming up with Helvetas, a Swiss NGO and Hess Natur, a German sustainable e-commerce company, to help the West African cotton farmers in a project called Slow Fashion Container.” The idea is that cotton from West Africa is brought into Europe, where it’s spun and knitted – via environmentally and socially-certified manufacturing – into a garment collection.

Hamnett is also teaming up with Help Refugees, providing the organisation with the “Choose Love” slogan. “We hope this project will be part of an educational tool to support refugees and combat the rise of the far right.” In fact, at the time of writing, Choose Love has become a hashtag used in the US to oppose President Donald Trump. “I like ideas that tick all the boxes,” notes Hamnett.

There’s also talks of working with the local community, about doing a school over in Italy too – with a lot of emphasis on technical training and the history of art and fashion – and about putting on a film season. In a year’s time, she plans to open up its facilities for others to use. And it’s something she’s very specifically not doing in the UK, due to Brexit. And because, importantly, she defines herself as being European. “I’m more European than I am British. I prefer it. I prefer the attitude, the work ethic, the kindness, the absence of a class system,” she says. Straight-talking, eloquent with it and wholly refreshing, Katharine Hamnett, it was a pleasure to meet you.

To find out more visit www.katharinehamnett.com

Interview taken from issue 12 of Hunger, Stand for Something, on newsstands now