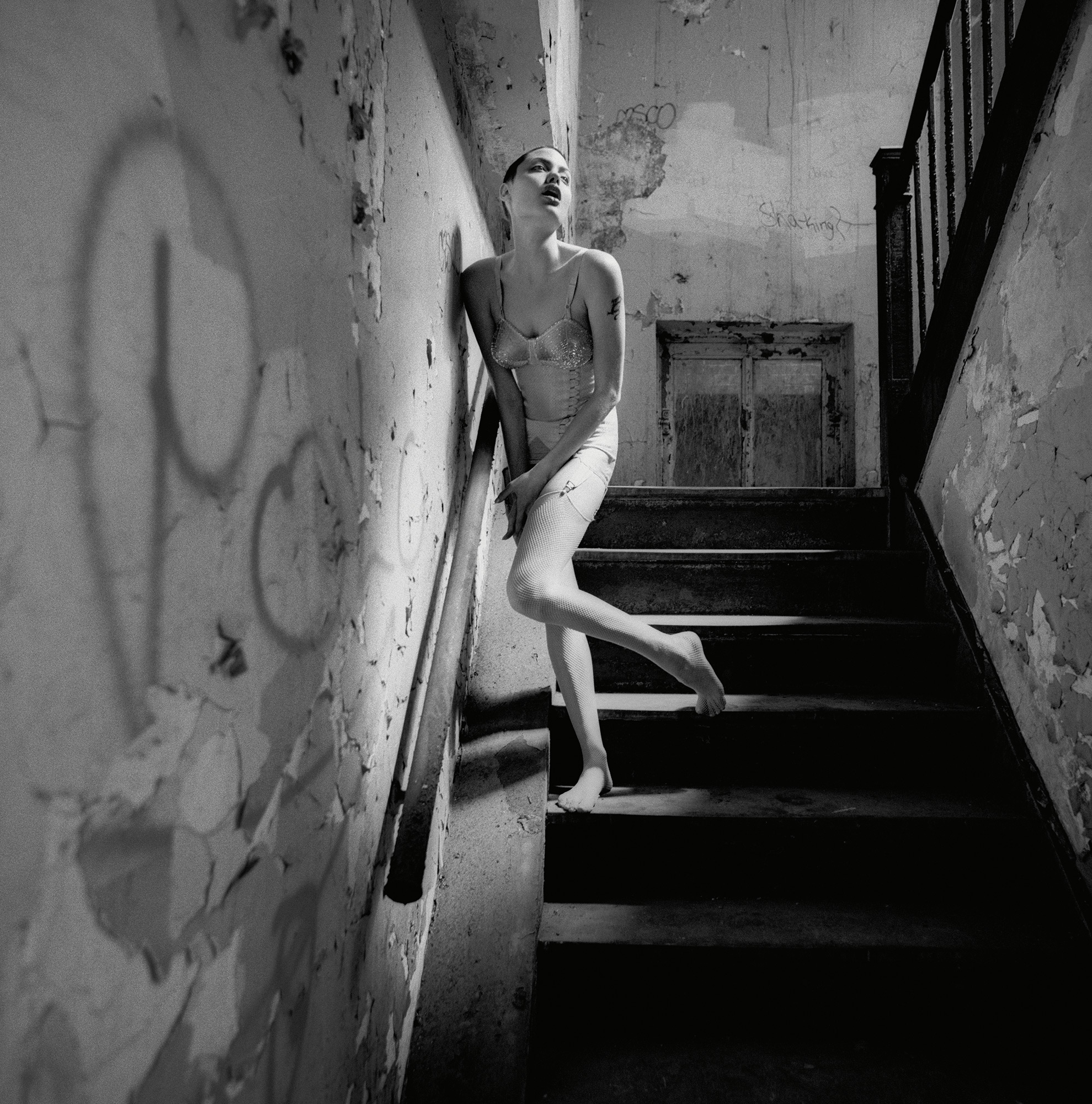 [I]f you surveyed a group of people and asked them to pick out the music video that summed up the 90s for them, chances are at least half would go for Nirvana’s “Smells Like Teen Spirit”. And the other half would probably still pick something directed by Samuel Bayer, the man behind that iconic video and countless others that came to define a generation of music.

Born in Syracuse, New York, Samuel earned a degree in Fine Art before moving to LA in the early 90s in search of that elusive big break. Unbeknownst to him, a gargantuan opportunity was just around the corner, but it didn’t come without a price. And first off, that was the cost of lunch. 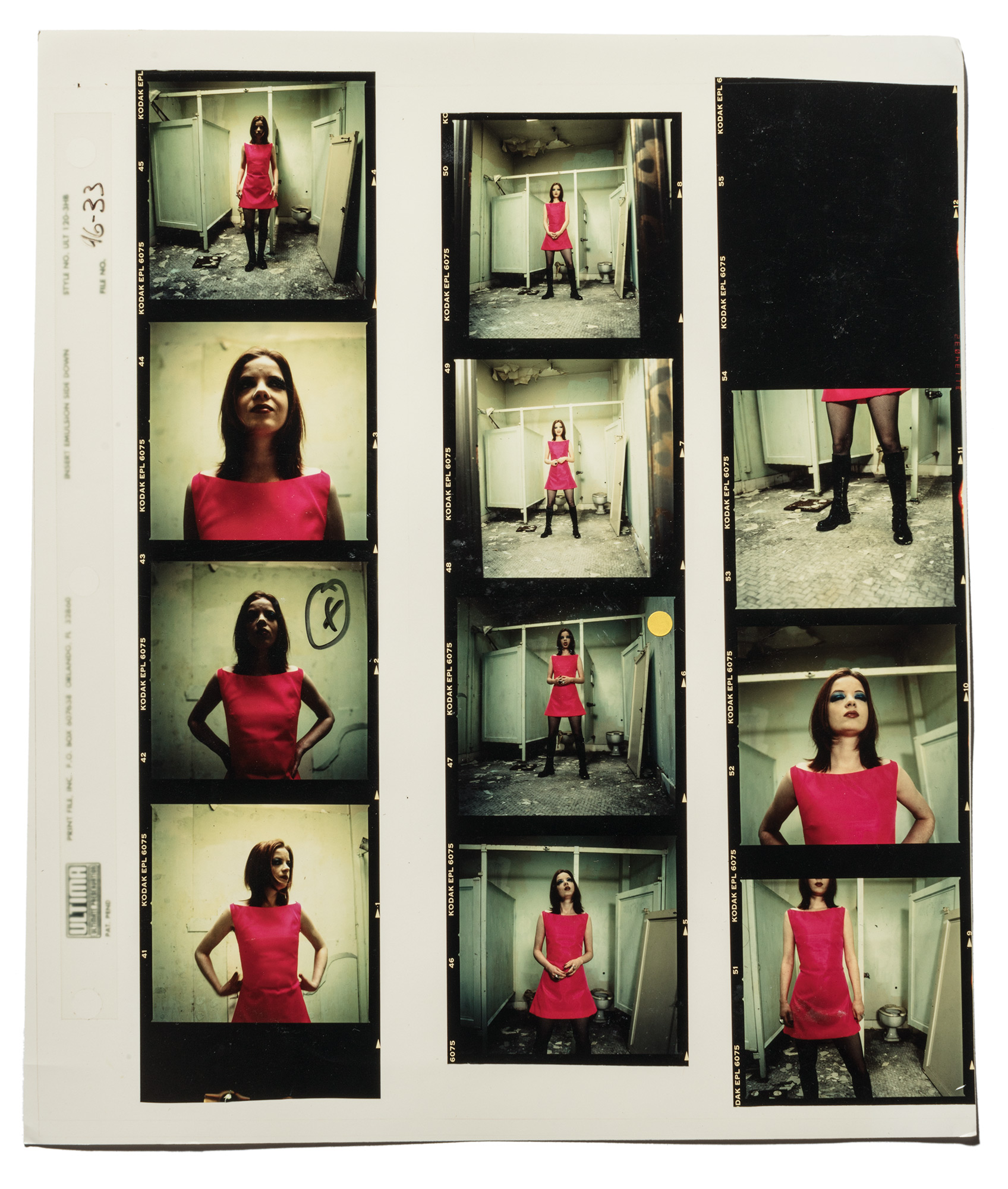 Contact sheet, Shirley Manson on set of Garbage "Only Happy When It Rains" 1996

"[Kurt Cobain] refused to perform. He would just eyeball me through the camera and not sing the lyrics, he didn’t like me and he didn’t want to be there.”

“I had moved out to LA and I had literally no money at all, but I had a couple of contacts,” he remembers. “I knew someone over at Geffen records – and this sounds like a very melodramatic story but it’s true – so I took her out for lunch and bought hers but none for myself. She asked why I wasn’t eating and I told her that I’d used my last dime to buy her lunch so could I have a job!” His ballsy attitude paid off and she threw him a bone in the shape of the then unknown band from Seattle – Nirvana.

“She asked me if I wanted to do a video for them, so I went to see them at the Whiskey and watched them play a show for about 300 people. I walked in the door as they were playing “Smells Like Teen Spirit” and I was like, “That’s the video I want to do!” It sounds too good to be true, but as Samuel learnt, nothing comes easy, especially in the music business. After calling in every favour he could (“Even the janitor in the video was the actual janitor from my apartment block”) and pouring his all into the video, Kurt Cobain – to put it bluntly – hated it. “He refused to perform,” Samuel remembers. “He would just eyeball me through the camera and not sing the lyrics, he didn’t like me and he didn’t want to be there.” 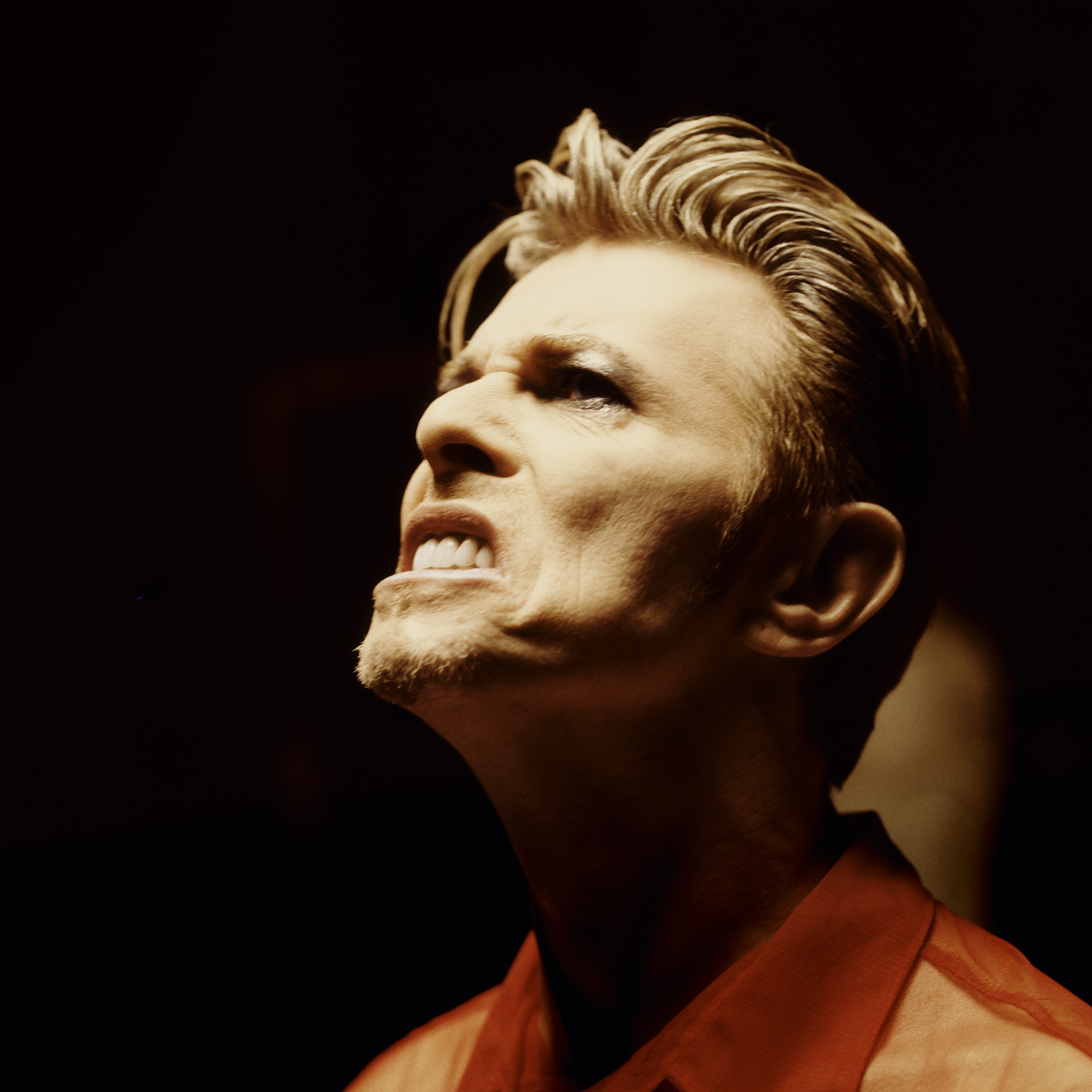 “My videos were never about fashion or celebrity. What was important was to create worlds for them that were different.”

“At about 10 o’clock at night, after being there all day, I went up to someone from the record company and was like, ‘Listen man, if he would just sing the song a couple of times, you’ll have a great music video, and if he doesn’t you won’t have anything.’ Kurt finally gave in and did a couple of incredible, intense and venomous takes that were just amazing to watch. And then at the end of the day when I felt like I’d had the crap kicked out of me and was completely exhausted, someone came up to me and said that the fans and the band wanted to destroy the set. I was like, ‘What do I care, just destroy it then.’ All the kids started jumping off the stage ripping up the set and it felt like a gift from God. I was sitting at the camera and I had a full roll of film so I just hit it and filmed in slow motion for four minutes. That became the end of the video.”

“The powerful part of the story, I think, is that Kurt didn’t like the edit that I did, so he came down to Los Angeles so that we could make some changes. Once we were done I gave him cab fare and watched this little guy go out the door. Then three months later they had the number one record in the world and I had a huge music video on my hands.”

That video sent Samuel’s career skyrocketing, but the labour of love took its toll. “The profound and really sad thing – which I think has a lot to do with making art – was that I gave my heart and soul to that video and it’s not something that I think I could ever repeat. It felt like the perfect storm.” 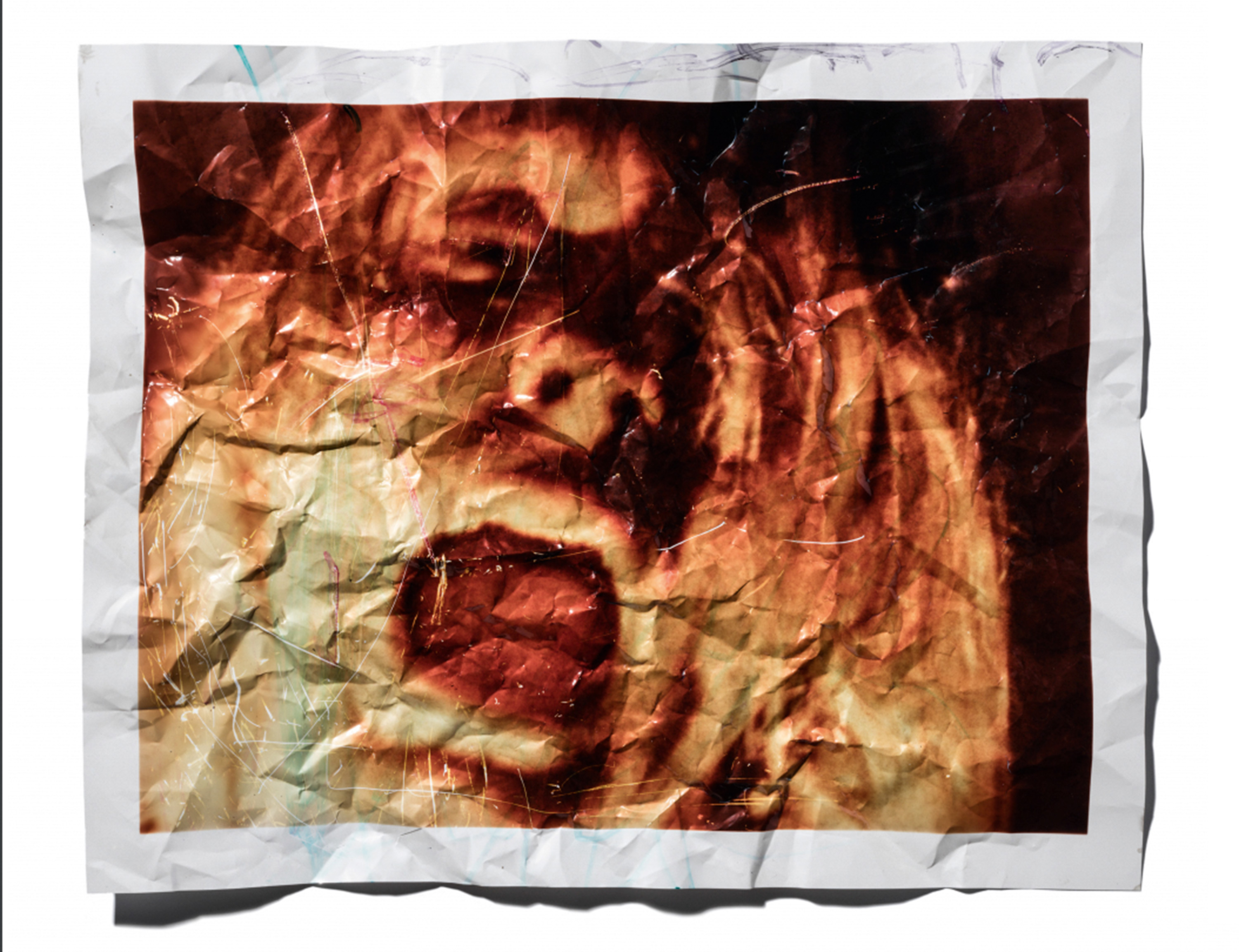 "Rock music was the soundtrack of the images that I made – whether that was punk, or a celebrated band like The Stones or someone like Bowie. I don't see videos like that anymore."

Samuel never worked with Nirvana again, but in the ensuing years created music videos for the likes of Garbage, The Smashing Pumpkins, Metallica, The Cranberries, The Rolling Stones and David Bowie – the artist that left the biggest impression on him. His work became synonymous with an era and unlike today, in a social media world obsessed with perfection where the sheen is never allowed to slip, Samuel’s videos were raw and gritty, and packed an emotional punch. Epic stories intertwined with the lyrics to create visuals that felt more like a visceral assault than just a pretty picture. Simply put, they were art. “My videos were never about fashion or celebrity,” he says. “What was important was to create worlds for them that were different.”

“When I made ‘Zombie’ for The Cranberries, as an American what do I know about what that song is about?” he says. “I remember going to Belfast, when we were filming and I went out with a camera when it was still a city under siege and had a gun pulled on me by a soldier. I was in places that I really shouldn’t have been, but I was trying to immerse myself in what the Irish identity was about. The blood and the soul, the history and the pain of what that song was really about.”

“I don’t want to be the cranky old man talking about the good old days but I don’t know if people look at music videos in the way that they did back then, and I don’t know if they still take the same chances. Rock music was the soundtrack of the images that I made – whether that was punk, or a celebrated band like The Stones or someone like Bowie. I don’t see videos like that anymore, and I’m not saying that what I did was the best, but it felt like everyone was really watching what we were doing and I guess it felt more important then. But if you live long enough you become part of history.” 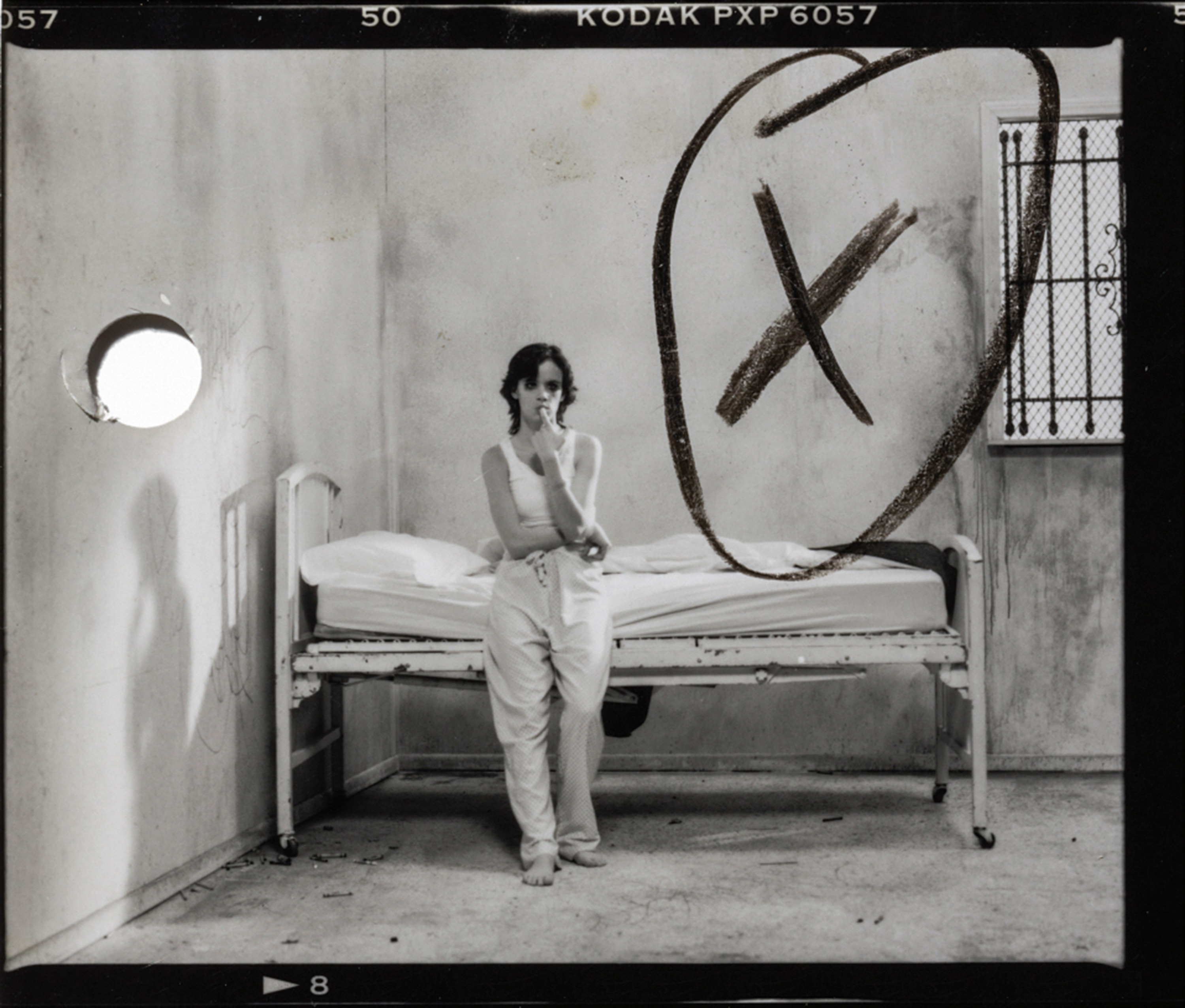 Juliette Lewis on set, Melissa Etheridge "Come To My Window", 1993

“We’re in a weird new reality, but I do think that for every action there is a reaction, so for every Trump there will be another Obama, and in that vein, I’d love to see another Nirvana come out.”

The onslaught of the millennium brought with it the age of the internet and with that the consumption of music was changed forever. Instant access meant no longer channel surfing to catch a glimpse of your favourite video, or waiting anxiously for an album release and then ripping the sleeve out of your newly purchased cassette to learn the lyrics and read the band’s thank yous. Today we live in a disposable reality, yet – from fashion to film to music – the 90s remains one of the most referential eras for the Gen Z.

“I think that it takes a generation to make you nostalgic for the past,” Samuel says. “I remember in the 90s people would talk about the 70s. The 90s were still analogue, we weren’t self-programming like we are today. It was pre-Kardashian, pre-reality TV. Some of my friends that are celebrities are always scratching their heads being like they don’t sing, they don’t act or dance but because they have 100million Twitter followers or whatever the fuck it is, they’re considered relevant. I mean, we even have a Twitter president now and I think we’re nostalgic for the days when that didn’t exist.”

“We’re in a weird new reality, but I do think that for every action there is a reaction, so for every Trump there will be another Obama, and in that vein, I’d love to see another Nirvana come out.”

“Great art is made when you’re in tune with your environment. We live in a mad world now, and the art I try to create is always a reaction to how I see it,” he says. “I started to understand the power of art through my mother, who was a painter. She died very young of cancer and she painted while she was dying. That had a huge impact on me as a child, and more recently David Bowie’s death had a very profound effect on me. I found it so beautiful that he wrote a record when he was dying. It reminded me of my mother. I sometimes say it’s the responsibility of the artist to be affected by the world, and I believe that you have to make art like you’re going to die tomorrow. You can’t get more real than that.”

Taken from issue 13 of Hunger magazine, Mad World, out now